I'm in Ross River now, but it took a lot longer to get there than I had originally planned.

I really enjoyed the road and the scenery along the South Canol the last time I drove the Canol roads, so I decided to take that route again. 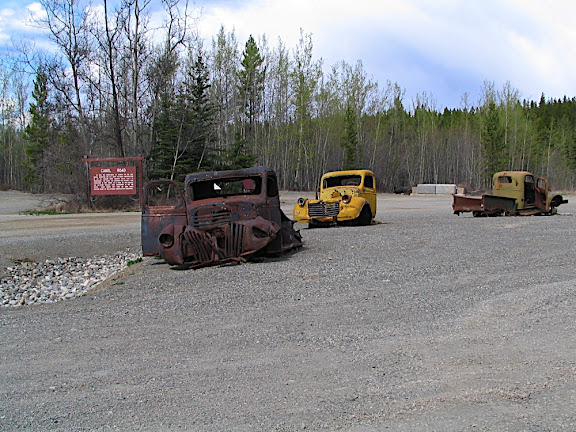 The southern end of the South Canol at Johnson's Crossing. 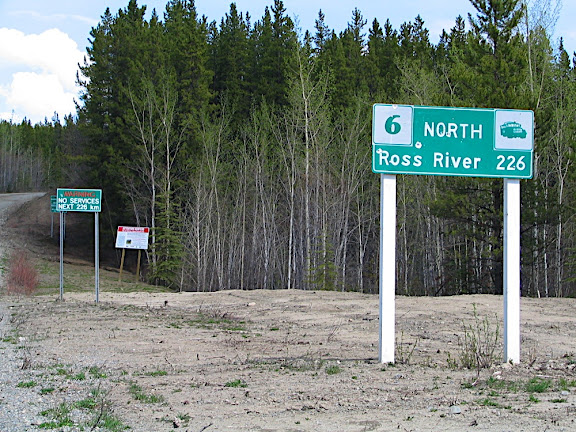 Road signs. The sign in the background says "WARNING: NO SERVICES NEXT 226 KM". Note the obligatory bullet holes on the sign in the foreground.
The road had deteriorated since I last saw it, which wasn't surprising given that the Quiet Lake Maintenance Station was closed for the season (according to an old sign about 8 km up the road). The road had been plowed and the gate was open though, so I continued on. 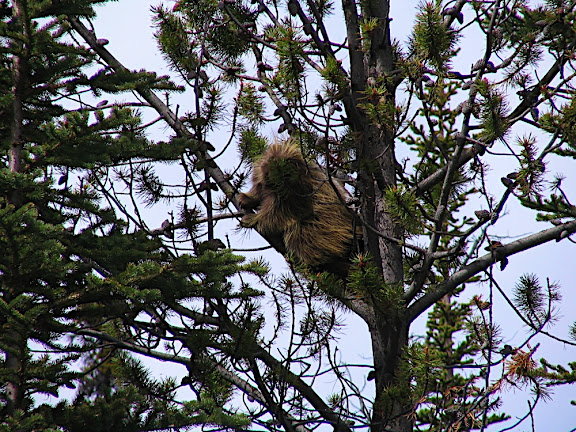 Erethizon dorsatum.
In spite of the road conditions, the scenery was stunningly spectacular. None of the pictures I took come close to doing it justice. 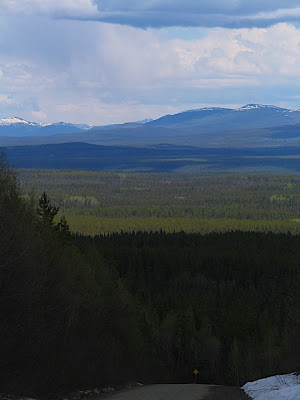 I wish I knew how to capture the stunning contrast between the blues and the greens. 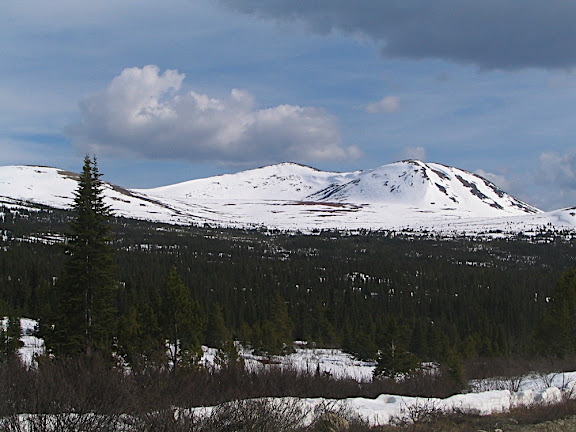 I needed to use a super-wide-angle panoramic lens to capture it all. This is just the tip of the iceberg and not a very good shot of the tip at that.
As I drove, I though about how much fun it would be to drive in a Canol Road Rally. The road was narrow and winding, requiring a lot of skill to go any faster than the posted speed limit which, with the state that the road was in, was overly optimistic. Then, I came across my first real Road Rally obstacle. 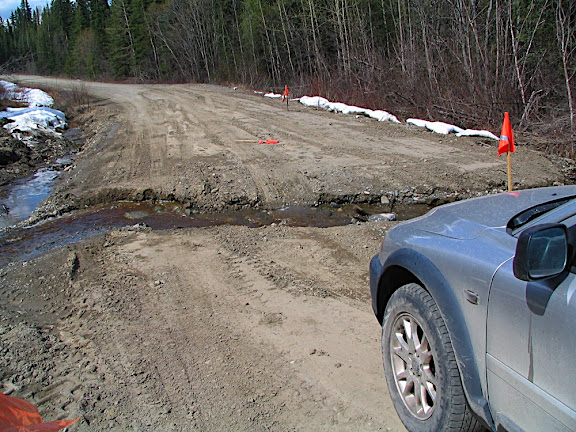 I puttered along the highway, navigating twists and turns and hills as I went, convincing myself more and more that a road rally along the Canols would be a great event. I mapped out how the whole thing would work, inviting drivers from all over the world to drive from Johnson's Crossing to Ross River and, maybe, beyond. 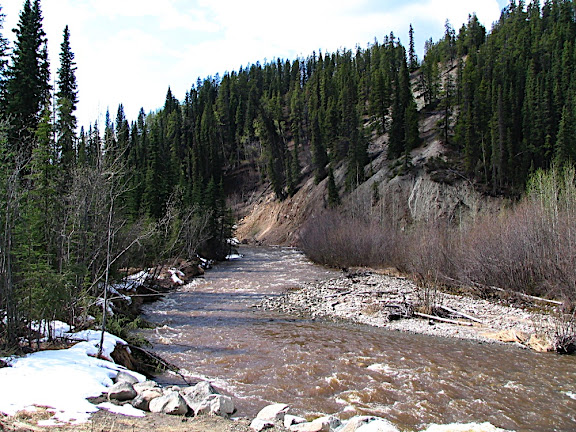 The creeks and rivers were high with the spring run-off. 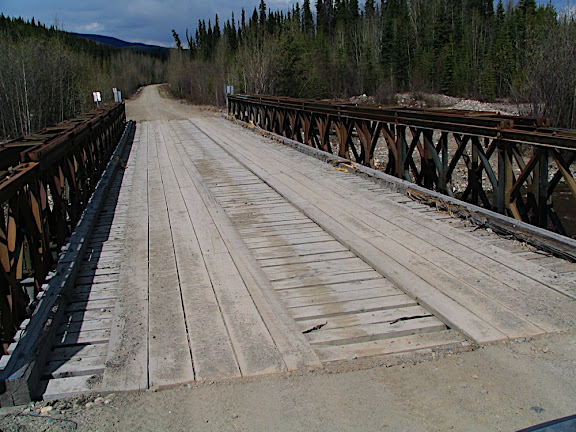 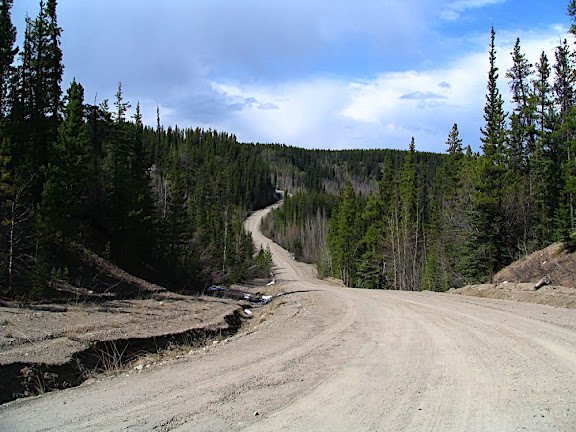 A straighter, more level stretch.
I wanted to get a picture of "38 miles up the Canol Road", which was immortalized in the Stan Rogers song "Canol Road". Alas, I didn't reset my odometer (which is in miles) when I made the turn-off at Johnson's Crossing. Fortunately, there were kilometer markers and, using those and a conversion tool on my laptop, I was able to get a pretty good approximation of where 38 miles was, just south of Quiet Lake. 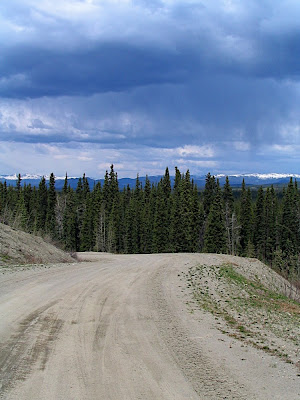 38 miles up the Canol Road.
Not long after honouring the memory of Stan Rogers, I, rather suddenly, came across my next obstacle. If the definition of a pothole is a hole in the road about the size of a cooking pot, I must have flown by a stockpothole and a cauldronhole. After I passed them, I stopped the car and went back to investigate. At some point, someone had installed flags to mark the holes, but they weren't standing when I went by. I reinstalled the flags, took some pictures, and continued on. 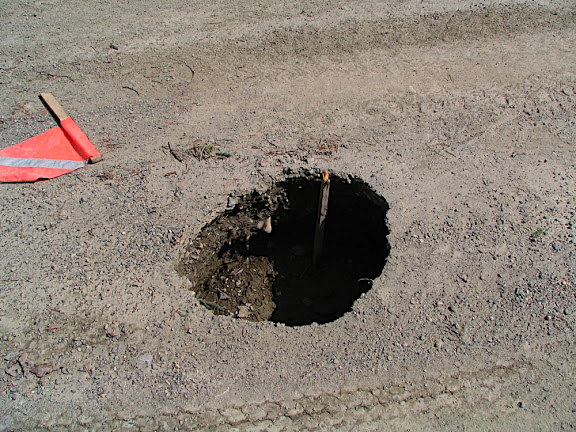 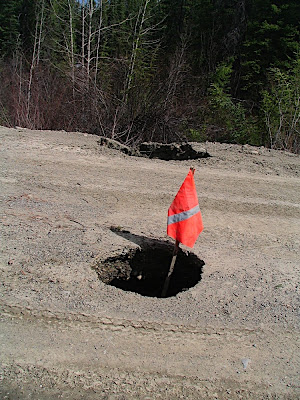 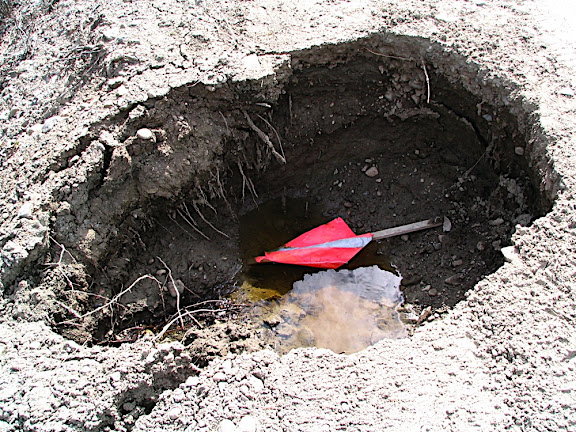 As I continued, the road began issuing newer and better challenges. If I hadn't seen the truck tracks that indicated successful traverses of a make-shift bridge, I never would have passed the second washout. 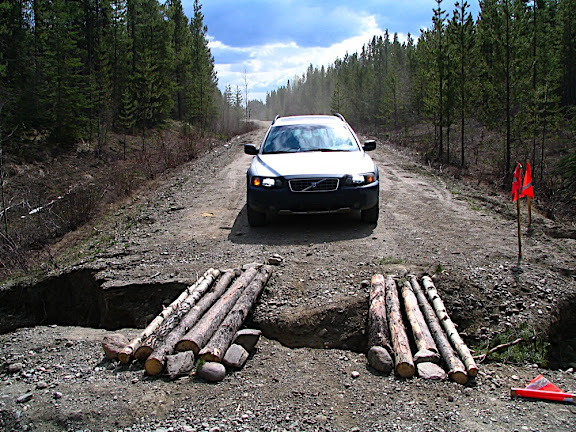 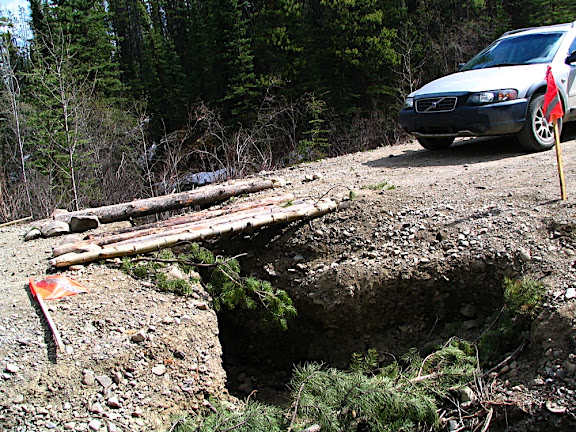 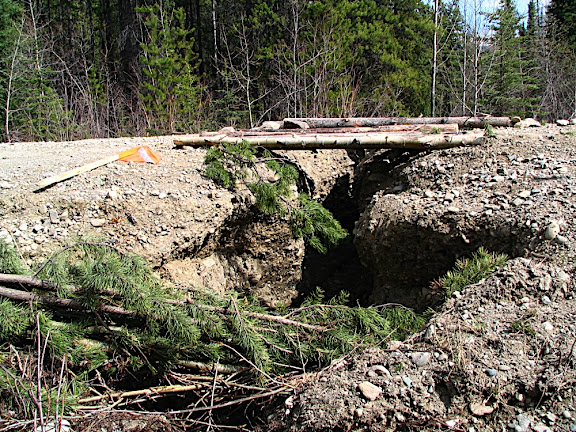 ...but not so wide.
Work trips are seldom this exciting in the South, I told myself. I knew that I was taking some risks, but they were calculated risks. I drove slower, inspecting things before attempting them, and considered that there might be more obstacles ahead, but that turning back also meant that I would have to repeat everything I had overcome on the way up. I continued.

It started to drizzle as I drove by Quiet Lake. The winter ice was melting rapidly on an otherwise warm and pleasant day. 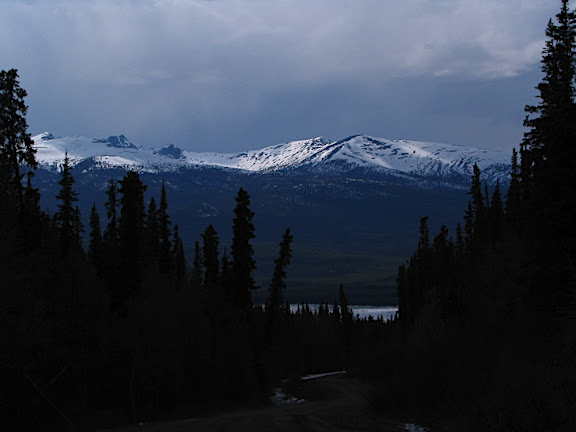 The approach to Quiet Lake. 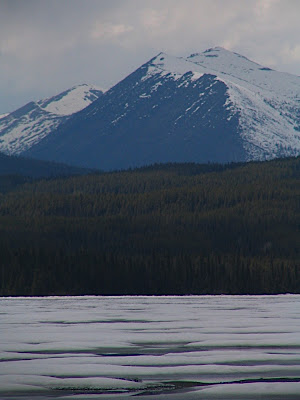 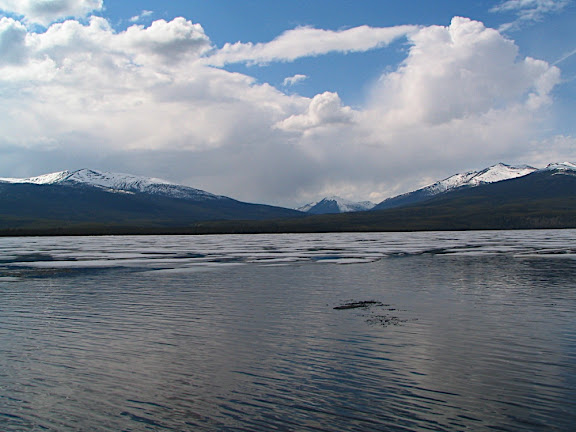 Open water on Quiet Lake. I wonder how the snorkeling is... 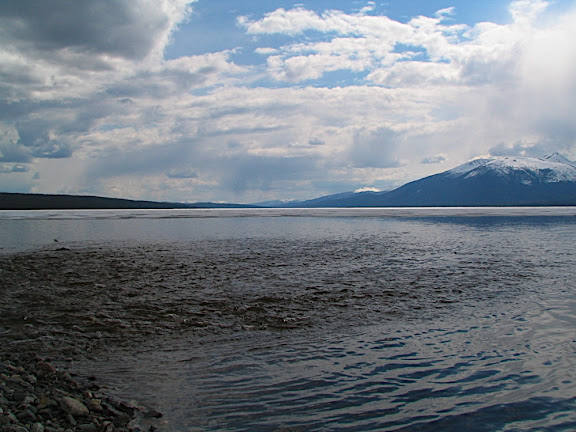 Ripples from a creek, feeding the lake.
I was continually astounded by the scenery, but the day was growing long and I gave up taking potentially hundreds of pictures in favour of making it to my destination before it got too late.

All along Quiet Lake, there were trees that had fallen over the road, adding to the fun of my own private South Canol Road Rally. In my mind, I continued with the event planning. Chainsaws, winches, and 2x12 pieces of lumber will need to be part of the mandatory equipment, I noted. 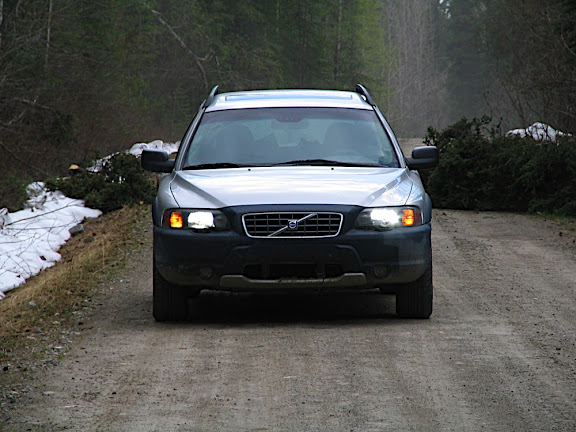 Yet another tree (with a passageway cut through it) on the road.
I passed the Quiet Lake Maintenance Station which was, as the sign had promised, closed, and Rose River Bridge #1. As I passed the bridge, I saw someone just off the road. It was good to know that there was someone within a hundred kilometres - you know, just in case I got stuck somewhere. I had plenty of food (not to mention all those porcupines), warm clothes, and matches, but it's so much nicer to get a ride out with someone if something happens to the vehicle. 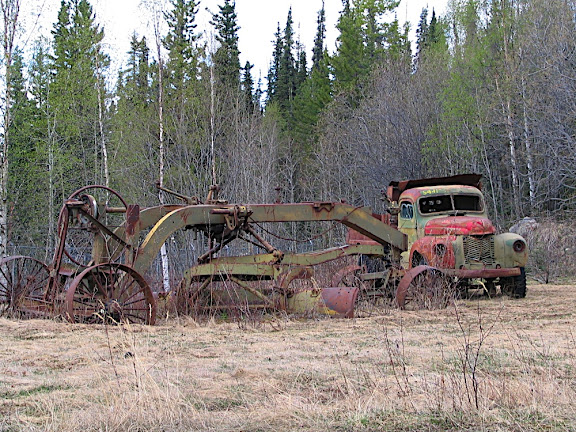 At the Quiet Lake Maintenance Station. 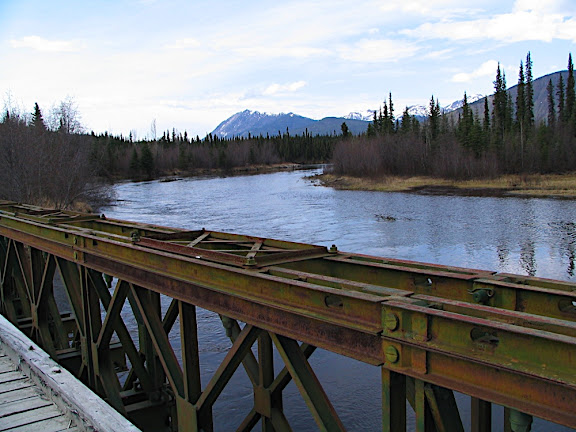 Rose River Bridge #1.
Considering the road conditions, I was making good time and figured that I would get to Ross River in time for dinner. Then, I came across the biggest Road Rally obstacle yet. 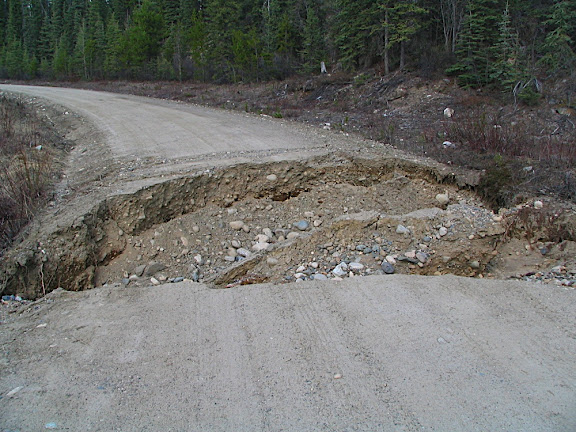 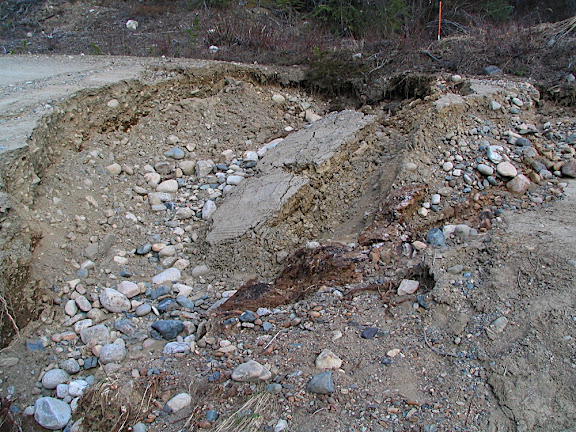 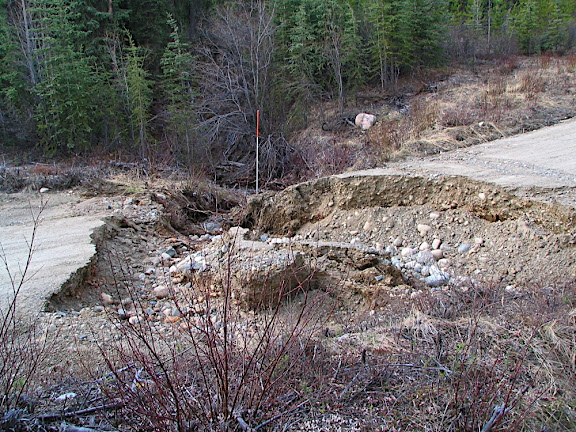 I made it out, of course. After stopping to talk to the man I had seen at Rose River Bridge #1, and after stopping to open the gate (about eight kilometres in from the junction) that someone had now closed, and after driving back to Whitehorse in time for a steak supper, I finally made it to Ross River just before midnight.

The other way from Whitehorse to Ross River, via Carmacks - View Larger Map
In Ross River, I was informed that the plows were working hard from the north end to clear ice and snow from the road near Rose River Bridge #6.Even if I had found a way across that washout, the road was still impassable.

From all of this, I learned a very important lessson: When in the Yukon, before making a road trip, phone 511 or visit 511yukon.ca to get the latest road conditions. Then, when you do, make sure you select the right highway number and listen closely to the sleep-inducing automated voice - or else you might find that the road that you thought was, say, the open Highway 5 is actually the closed Highway 6.

Oh, and is anyone out there interested in participating in the Canol Road Relay next May?! It's a blast!

The only thing that could have made this better is if you had 2 kids in the back seat with you!
The actor Ewan McGregor (obi wan kenobi in our house) did a documentary called The Long Way Around or something like that. They started out in England and rode to NY City on BMW motorcycles. It was one of the most interesting series I've ever watched! They took roads much like this!

Jennybell: I'm not too sure since I wasn't able to find a good map of their route, but I think they might have gone up the North Canol on their "Long Way Round". (I could be mistaken).

Stacie: Sure! But you've got to ride with a navigator.