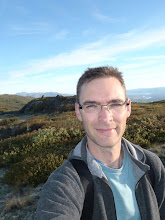 Sometimes informative and often farcical, Michael's Meanderings is written by Michael Pealow of Whitehorse, Yukon, Canada. "Meandering Michael" started blogging in April of 2005 to keep his Mum from phoning to ask if he was still alive.

Stemming from his compulsive need to explore, but also from a passion for Canada's north, Michael's Meanderings soon took shape as a travel diary. Since then, his travelogues have become a resource for people who want to learn more about living and traveling in northwestern Canada.

A husband and father of two young daughters, Michael also writes about his journey through family life. With family, as with exploring a new trail, you can never be sure where things will go.

In May of 2008, his eldest daughter, Jade, started having unexplained seizures. Medications failed to address the problem. Before long, Jade was having hundreds of seizures every day. Michael and his wife, Fawn, were able to break the pattern by using the ketogenic diet - a high fat, adequate protein, and low carbohydrate diet that is known to have neuro-protective qualities. The situation has substantially improved, and Jade no longer has seizures and has successfully weaned off of the ketogenic diet. Michael's Meanderings documented their journey through childhood epilepsy, and Jade's progress.

are you still writing this blog? I just found it and our daughter is on the ketogenic diet also. Helps to know we are not alone.

Hi! I've just been taking a break. No, you're definitely not alone.

I'll do an update sometime in the near future.