Pictures of My Hand (and some blurry plants)

It has been a while since I wrote anything about THE GREENHOUSE.  Yes, it really does deserve all the capital letters.

It has been a productive year in THE GREENHOUSE, though an experimental one, too.  I planted some plants just to see what would happen, trying some plants out in new areas to see how they would respond, and partnering plants with other plants to see if they would get along and how well they would tolerate over-crowding.  The overcrowding thing is really because I failed to follow the instructions on the seed packs.

The first picture is of the late-planted (from left to right) beet, carrot, beet, carrot, okra, mostly-picked-now radish bed.  I got some good radishes out of there, but not as many as I would have liked.  The greenhouse is a little warm for them, so they bolt too soon.  Nonetheless, I'm going do to another planting shortly.  Fresh-picked radishes are sooooo nice (and if I don't get any radishes out of them, the leaves are good eating, too)! 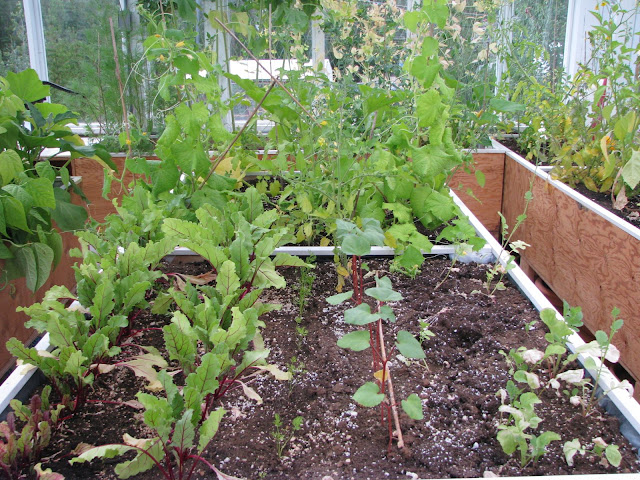 The romaine loves the greenhouse.  We planted far too much, and have to harvest it nearly daily just to keep up.  Aw, shucks! 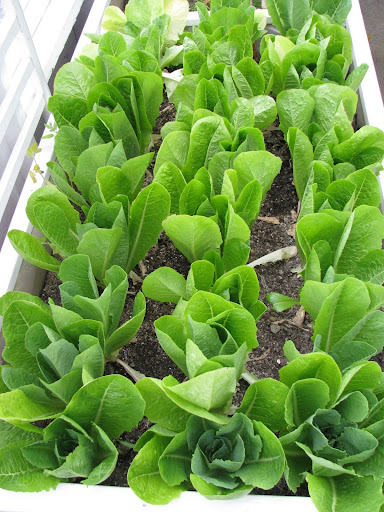 Here's one of my big experiments for the year: corn!  And by big, I mean that I should have planted it in the centre beds where it would have more room to grow.  Definitely one I want to try again next year, interspersed with pumpkins or other squash, which really seem to like growing in the corn.  I tried planting carrots in between the rows of corn this year.  They're growing, but it seems like they're taking forever!  I thinned one out today and it was like eating candy.  Mmmm! 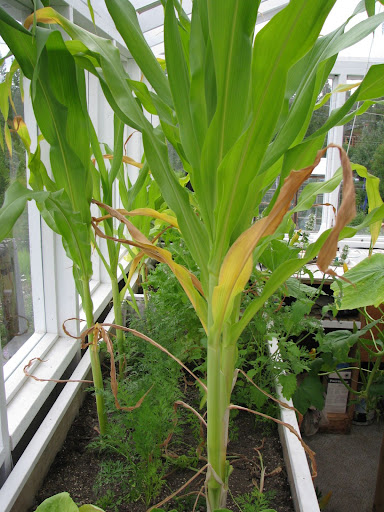 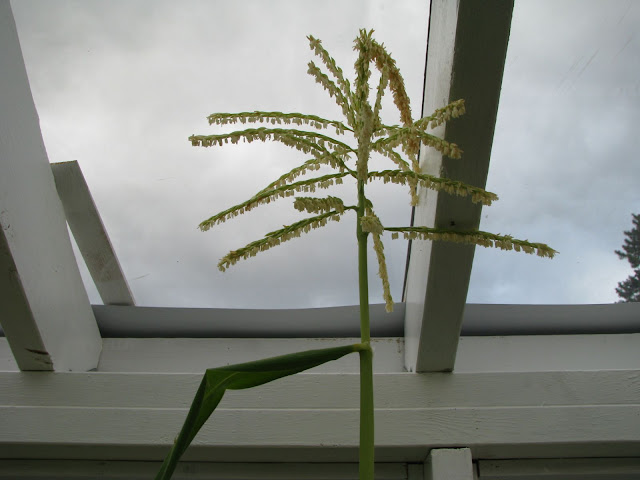 Down at the bottom of that vine is a tiny pumpkin.  Now that I've learned how to keep the fledgling pumpkins from aborting (the vine and any little shoots need to be trimmed after the pumpkin starts), I might actually have a little pumpkin to carve this fall! 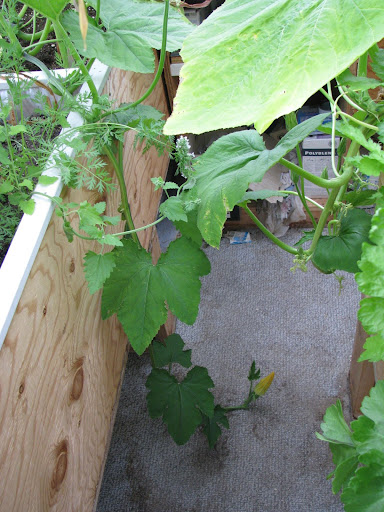 One of the runaway successes this year has been the green and yellow bush beans.  Ohmygoodness, the beans are taking over!  One of the things that I discovered this year is that celery and beans love each other.  I planted some celery in another bed where the plants gets more sunlight and they're about a third of the mass of the bean-covered celery plants. 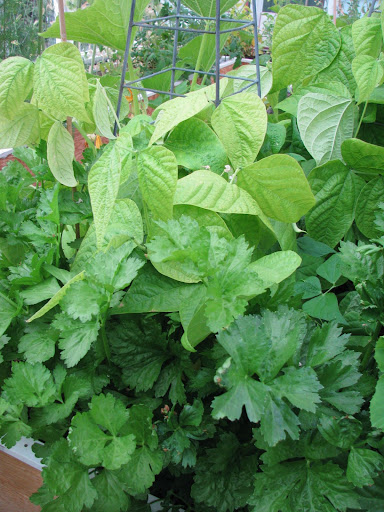 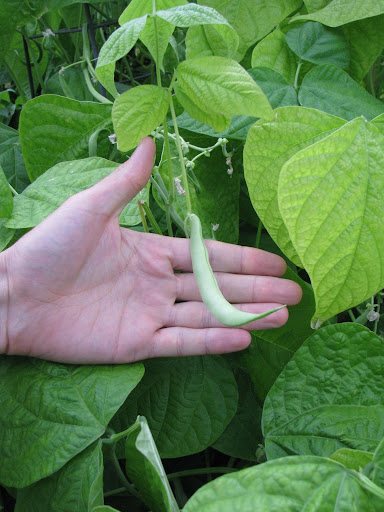 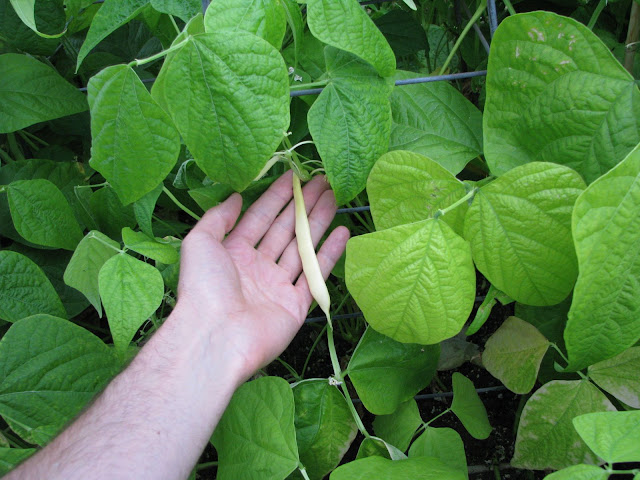 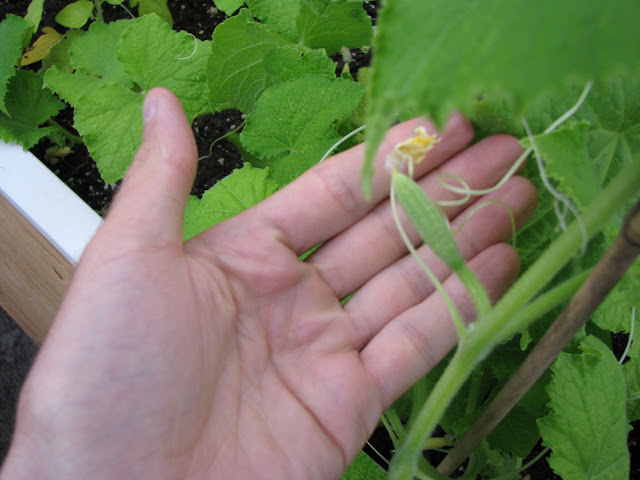 But just tonight, I discovered one that is actually growing!  What the heck?!  How do I make more of them do that? 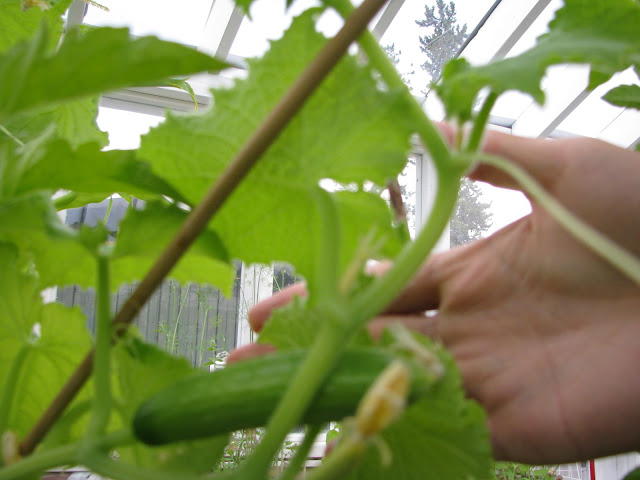 I learned that peas like it to be a little cooler and, fortunately, found a somewhat acceptable spot for them.  They've produced a bumper crop and, despite the yellowing from some very hot days, have started to rebound and are getting ready to produce another big batch of peas. 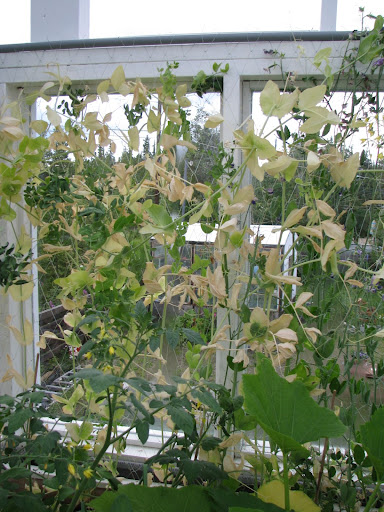 This was the herb bed, that suffered from lack of harvesting while Fawn and I took a little vacation.  As a result, everything in it (dill, cilantro, basil, something that I initially thought was Thai basil, but is probably catnip) has bolted.  With the exception of the "Thai basil", which the cat loves, I'm going to collect the seeds for planting in herb pots next year. 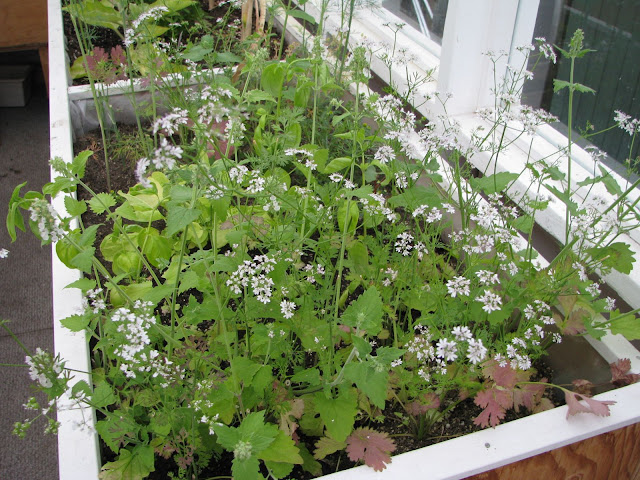 I planted these sunflowers in the right spot, that's for sure!  In the spring, when they sprouted, Jade told me she had a dream that they grew all the way to the ceiling.  I think her dream is going to come true. 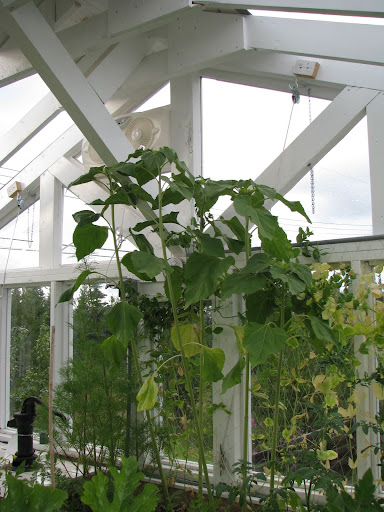 I'm definitely planting more zucchinis next year.  Like the cucumbers, they produce all sorts of tiny zucchinis, but they're a lot more reliable when it comes to growing some bigger ones.  Yum! 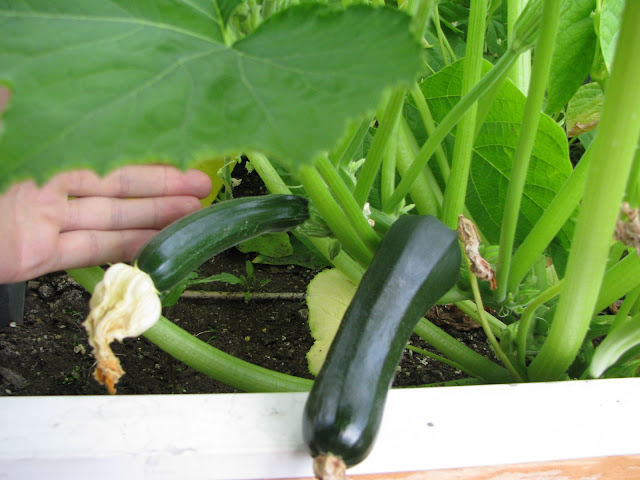 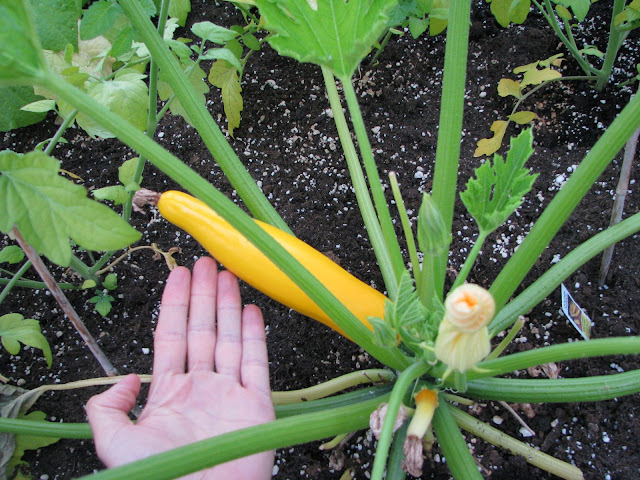 I tried some new peppers this year.  This one is a "Thai Dragon". 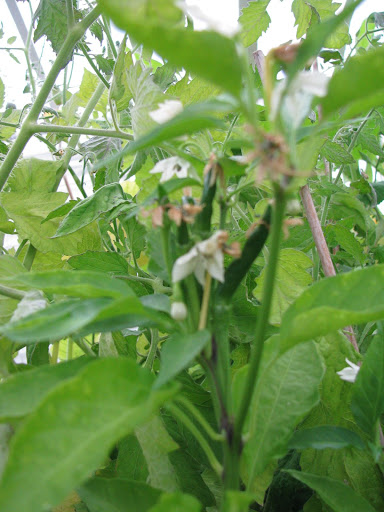 And here's a "Thick Cayenne". 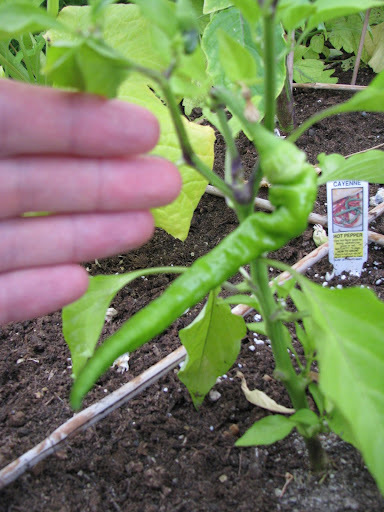 The "Ancho" isn't producing very well, but at least it's producing!  Next year, I'll be planting a lot more peppers.  I miss my habaneros!  I'm thinking that I'll transplant these ones into pots and grow them inside the house through the winter. 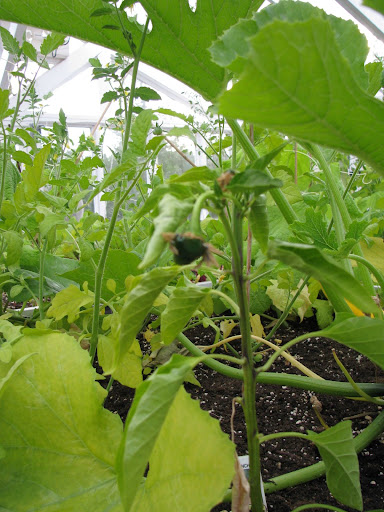 Here's the bed that I've found the most interesting.  I planted some tomatillos this year, having never grown them before.  It appears to be a very tall, very prolific plant, but the fruits grow inside a hollow-looking case, so I have no idea if they're actually producing any fruit.  I'm just going to have to bide my time, I guess.  Also, I've never had much success with tomatoes, but this year they seem to be doing fairly well, flowering in abundance and starting to produce some nice fruits! 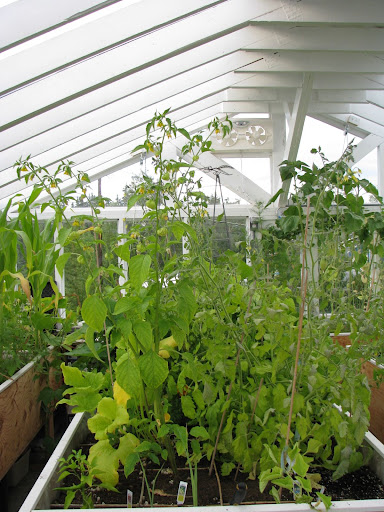 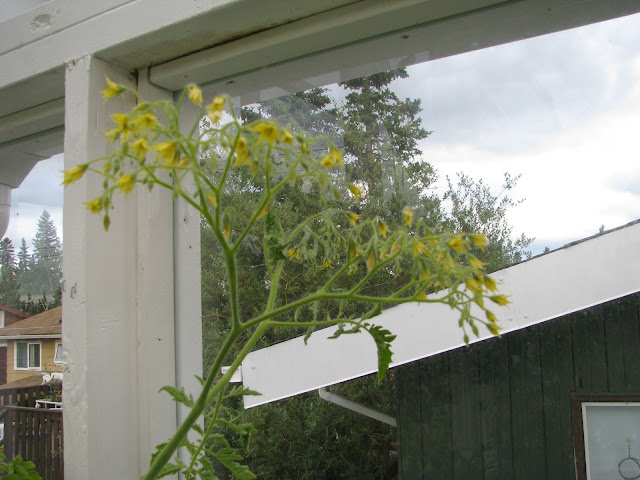 One of the things that I'm wondering about is how one of my tomato plants is starting to get this brown "rust" on the lower leaves.  Any suggestions on what to do about that, if anything? 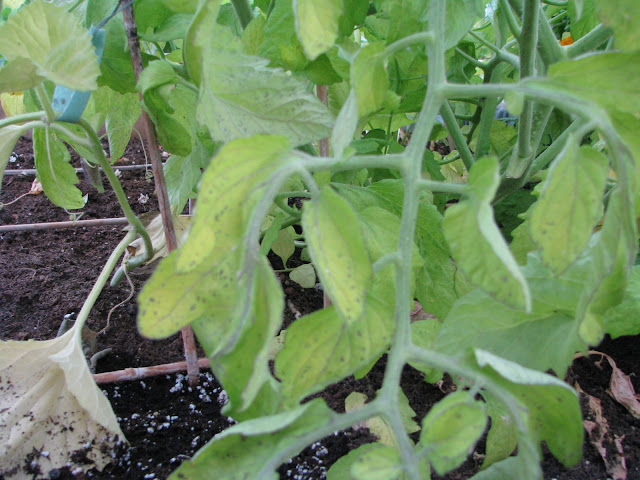 I was surprised to learn that eggplants are members of the nightshade family (along with tomatoes, tomatillos, and peppers).  Eggplants are another experiment this year.  They started producing flowers a while ago... 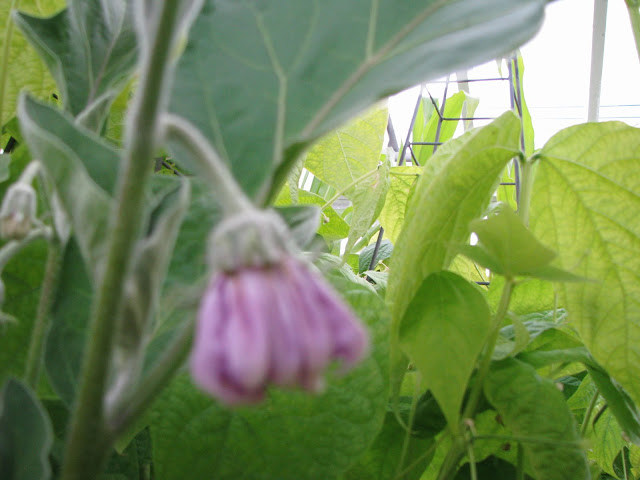 ... and tonight I discovered that one of them is actually fruiting.  Yay! I haven't had any pest problems in the greenhouse this year (knock on wood), which might be because of the spiders I introduced earlier this year.  Or maybe it's because of the marigolds on steroids. THE GREENHOUSE has been fun this year, functioning a lot better than it ever has - mostly because I've learned so much more about gardening and the little micro-climates inside the greenhouse.  It's going to be really interesting to see how things go next year!

Email ThisBlogThis!Share to TwitterShare to FacebookShare to Pinterest
Topics: Gardening, The Greenhouse

Well I have zero advice to pass along, but I am green with envy! I have plans for a greenhouse/chicken coop in the near future.... You will have to share all of your wisdom with me!

What a beautiful greenhouse. As for your cucumbers, you need to help the pollination process along. Take a male flower (flowers with no tiny cucumbers at the end) and rub the stamen inside the female flower (the ones with the tiny cuks). You can use a tiny paint brush if it's easier. Let me know how they turn out.
-Janet

OK so I am completely jealous! I think the greenhouse idea is much better than an actual garden as it doesn't look like weeds would be as much of an issue.
As for the cucumbers, my dad says perhaps being in the greenhouse they aren't cross pollinating as there isn't any wind and aren't being adequately fertilized. He said rub some male flowers on the female plants or something like that haha.

It's something I used to do with my peppers when they flowered before the insects were out (when I was growing them in the house). I'll give it a shot! Thanks Janet and Karyn!