I seem to have some sort of kinship with coyotes. I think it may have started when I was kid and went hiking in Grasslands National Park.  Our first night there, coyotes came up to our tents and started howling.  It wasn't a frightening experience.  It was beautiful.  I remember falling asleep to their music.

I spent a some time hanging out with a coyote on my first bison hunt.  We watched each other for what seemed like ages.  And then it took a big dump and walked away, as if to tell me what kind of luck I was going to have.  It was right.

There have been other encounters, but last weekend was one of the closest.  I was out riding my bike, with the girls in the trailer.  Halia was asleep.  Jade was happily reading a book we had just borrowed from the library.  As I rode, I got a feeling that I was being watched.  I turned around and saw that I was.

We were being followed by a coyote.  After riding for a while longer, I stopped to see what it had in mind.

It was very interested in us.  It wasn't nervous, but neither was it aggressive.  It would seem that it was just curious.

I let the coyote walk to our side, along the trail (not too close, of course), where I could keep an eye on it.  Then, I started riding and it trotted off the path alongside us before deciding, eventually, that it was time to go into the trees. 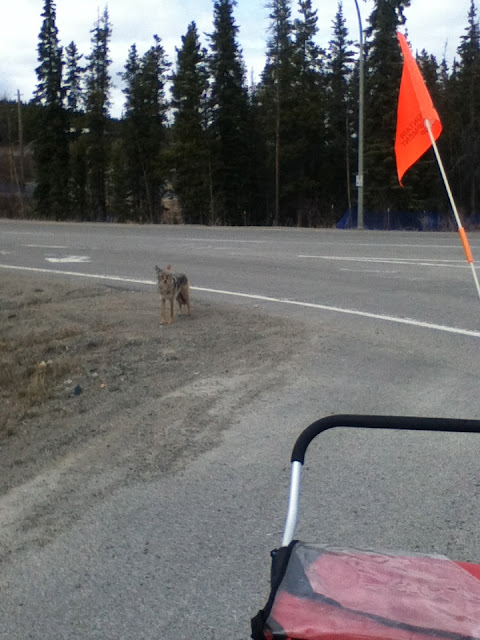 Email ThisBlogThis!Share to TwitterShare to FacebookShare to Pinterest
Topics: wildlife

He is a smart coyote and figures those girls might leave a nice trail of snacks for him!

Or maybe it just wanted to eat them: http://www.cbc.ca/news/canada/north/story/2012/05/28/north-coyote-bite-whitehorse.html