YXY to YVR to FRA to DME

Wow, it has been a long time since I've posted! I've had good reason, though. You see, I was out of the country for a little while.

I went to Siberia.

I'll chronicle parts of my trip over the next few entries, starting with this one.

Flying to Vancouver
I was up way too early.  Flying with my least favourite airline in the world wasn't my choice.  The flight had been booked by the folks paying for my trip to Russia, so who was I to complain?

I don't know why they made the flight so early.  I once suspected they scheduled their flights that way so people can get from Whitehorse to Vancouver in time for 9:00 meetings.  Now I suspect it's for another reason.

In typical Air Canada fashion, there was a problem with the aircraft.  Air Canada has had problems with their plane every single time I've been scheduled to fly out of Whitehorse.  It's just one of the many reasons why I don't book with them.  To their credit, when it became clear that they weren't going to get the plane working any time soon, they bought all of the passengers tickets on the best airline on the continent - Air North.  I think the reason the Air Canada flights leave so early is so that they can book their passengers on a reliable airline's regularly scheduled flight when their plane doesn't work.

There were a lot of very happy passengers.  The Air North plane is more comfortable, the flight crew is great, and they serve food for no additional cost.

It was the first time in ages that I can remember being happy with Air Canada.

The visa requires an in-person application.  For residents of the Yukon, the in-person application needs to be made at the embassy in Ottawa - a mere 5,660km as the crow flies.  I hired a broker to handle the visa application, but it took so long for the letter of invitation to come that we weren't sure the visa was going to arrive on time.

It was tight.  Really tight.  I mean, it came down to they broker saying "we'll be there at the airport in Vancouver with your passport and visa" kind of tight.

But they did it.

On Tour at YVR
Did you know they offer school tours at the Vancouver airport?  I do.  That is, I do now - and they're great!  Although somewhat worried that I might come across as "the creepy guy who was following the school tour around" I did it anyway.  The tour guides are great, and I had no idea there were so many interesting stories behind the art and operations of YVR! 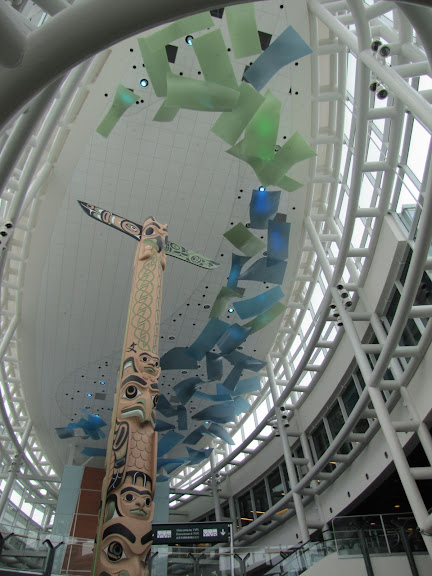 Sending the Sushi Back
I was originally planning on taking the Skytrain downtown to eat at one of my preferred sushi restaurants, but after getting my visa, checking my bag, taking a work-related phone call, and getting some Roubles, I didn't want to take the chance that I wouldn't make it back on time.  Instead, I opted to try one of the sushi restaurants in the airport.

When it finally came I was starving.  Ready to tuck in, I got a whiff of old fish.

I sniffed my plate and identified the source.  I looked around for one of the staff members.  Food poisoning is not a pleasant way to start an international journey.  There were no waiters or waitresses to be seen.

After what seemed like an eternity, I finally caught the eye of one of the sushi chefs.  I let him know that one of the pieces smelled.  He scooped the dish up and went to work preparing an entirely new plate.  Which was good, because I was expecting him to take off just the offending pieces and replace them with two others.

The sushi was OK, but not great.  And the service still sucked, especially for what they charge.  Next time, I'll take a chance with the sky train. 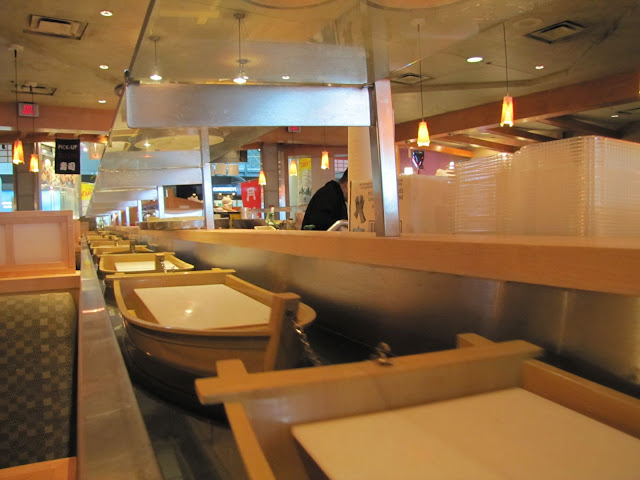 Liftoff with Lufthansa
It was over ten hours to Frankfurt and another three to Moscow.  The planet was cloudy between Vancouver and Moscow and most of the trip was done in darkness, which meant that I didn't get to see any of the spectacular sights - like Baffin Island and Greenland - along the way.

Still, my neighbour on the YVR to FRA flight was good company and I managed to take numerous naps along the way, preparing me for the 12-hour time difference between Whitehorse and Moscow. 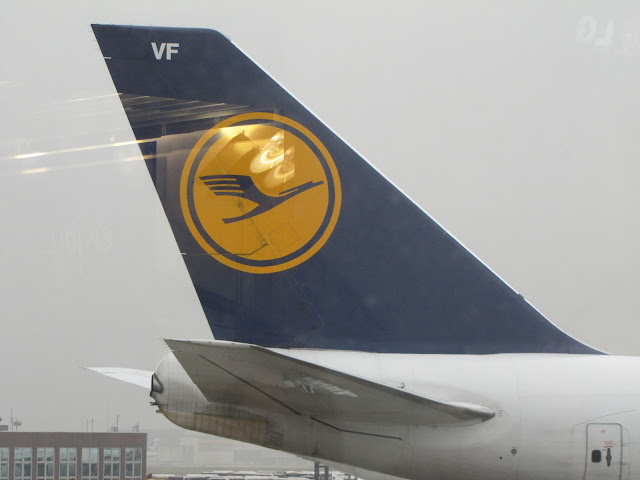 Clearing Customs
I was tired when we got to Domodedovo Airport in Moscow, but excited - and a little nervous.  Clearing customs in a foreign country can be a frightening experience, especially when language barriers get mixed into bureaucratic processes.

I stood in line and waited.  And then the booth closed.  I moved to another line and waited.  And then the booth closed.  By the third line, I was getting fed up.  New planes were arriving and the lines were getting long again.  Some guy tried to butt in front of me and I shoved him out of the way with my elbow.  It was very uncharacteristic of me, but I had read in more than one place that it's normal behaviour.  He got the message and, apparently, held no grudge.

After what seemed like an eternity of staring and smiling, she let me through.

The Taxi Ride
Domodedovo Airport is a fair distance outside of Moscow. Depending on traffic, it's at least an hour's ride.  A driver was supposed to meet our small Yukon contingent, but the one driver that we saw holding a "Canada" sign didn't want to have anything to do with us.  We arranged for a taxi for 2,000 roubles (about $70 CAD).

Our taxi driver was in the wrong profession.  He should have been a stunt driver.  He wove in and out of traffic with the greatest of speed, not caring that the air temperature was near freezing and the road was wet from melted snow.  I saw my life flash before me no less than six times.  When we got stuck in traffic he turned the car off, got out, and smoked a cigarette.  Later, he swore at a police officer.  In fact, there was only one word that he said that we knew and that was just one of the many words he used.

The Hotel
I walked past the security guards and up to the front desk of the Mariott Tverskaya.  After getting my key I went straight up to my room and crawled into bed.  It was nearly 11:00 pm in Moscow (which was actually 11:00 am for me, but by that point it didn't matter).  I slept right through to the morning. Oh, the sweet bliss of a comfy bed!

There was no time to be jet lagged.  In the morning we would be participating in a cultural program: a tour of Moscow.

But that's the next entry.