You see those towers along the right? The ones that run along that great, tall, wall? Behind that wall lies the Kremlin. 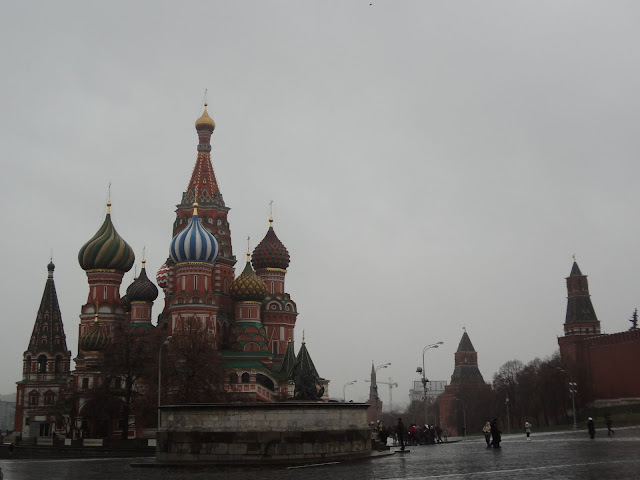 I'm going to absolve myself of any responsibility in trying to explain what the Kremlin is, because it is many things and has been many things. Instead, I defer you to my good friend, Wikipedia - and to an even better source, a Guide to the Moscow Kremlin. The latter explains the Kremlin in a much more interesting manner. 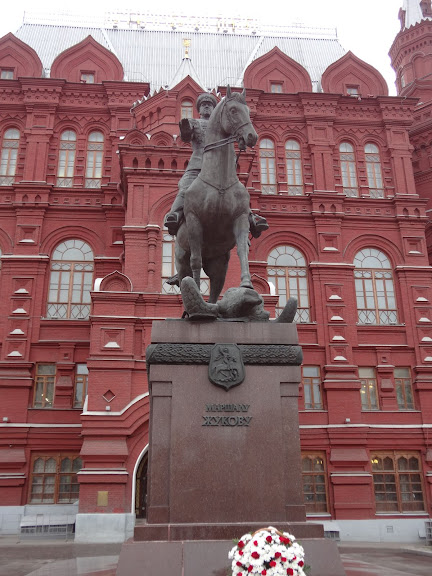 This is a statue of Marshal Georgy Zhukov, the most decorated general in Russia's history.  He played a key role in freeing the Soviet Union and other other Eastern European nations from the Axis Powers and was there to conquer Berlin. Check out that headless eagle and the fallen swastika.  I had no idea who he was when I saw this statue, but that symbolism isn't hard to interpret. 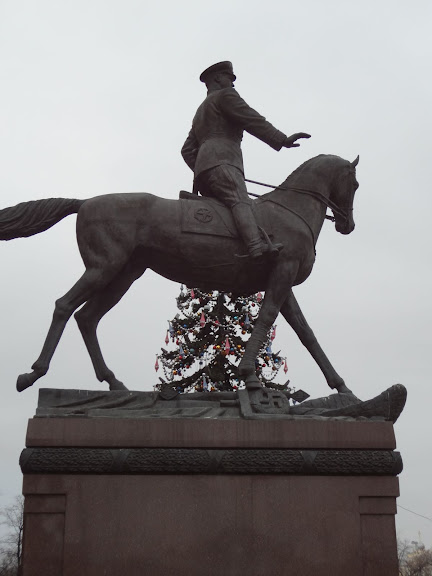 "Grottoes" were once popular features in palatial gardens.  This grotto and now-absent garden lay on the banks of a moat/river that has long since been turned into a moat-less/riverless promenade. 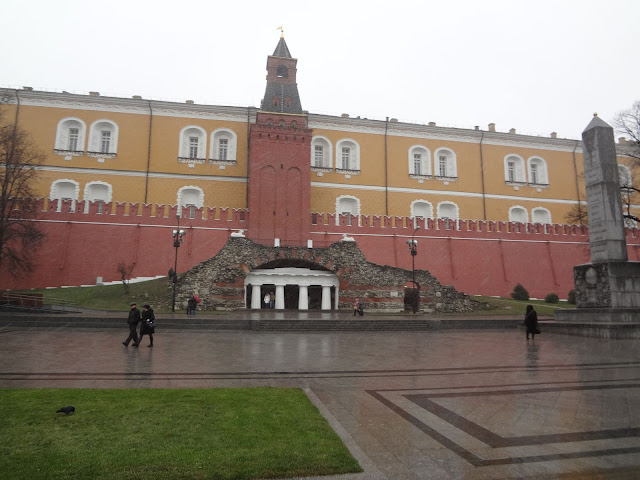 And here it is!  Following our zippy tour guide through the metal detectors and security guards, we entered into the fortress-city known as the Moscow Kremlin. 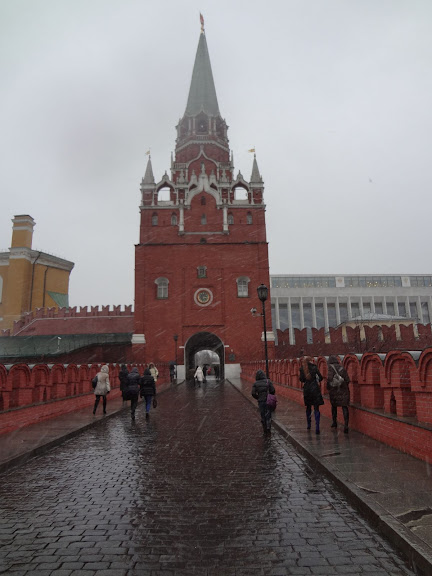 Inside the gates, there was a diverse mixture of old and new architecture.  There were numerous palaces and countless churches and chapels. 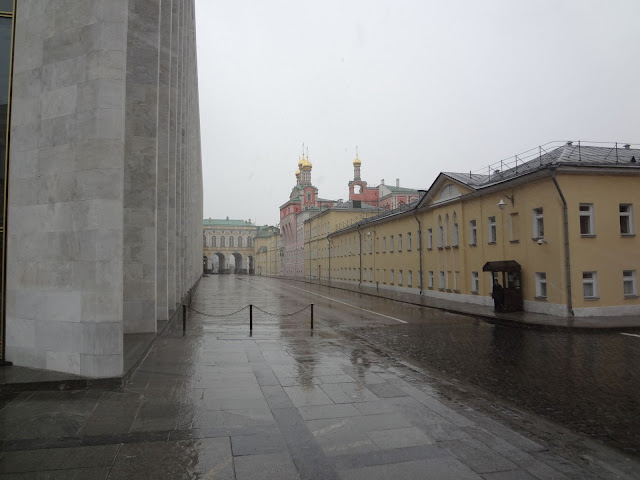 This is the old Arsenal building. 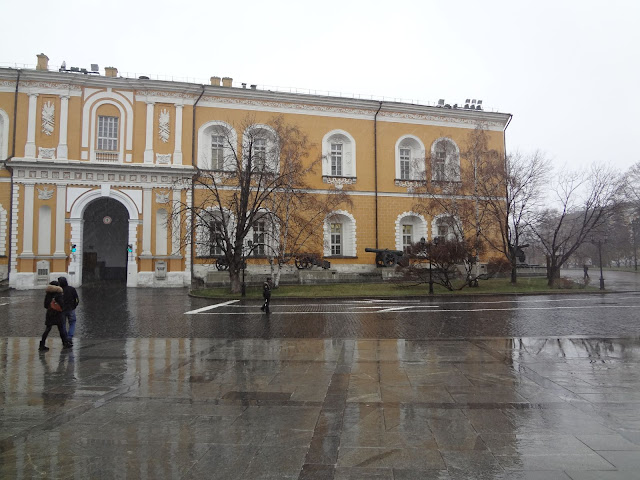 It is now used as barracks. 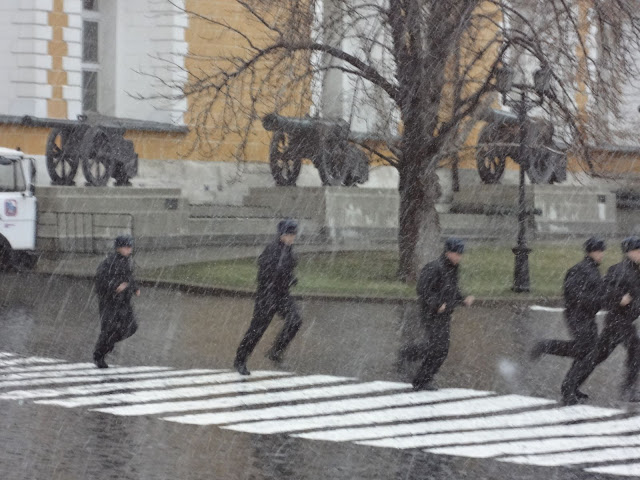 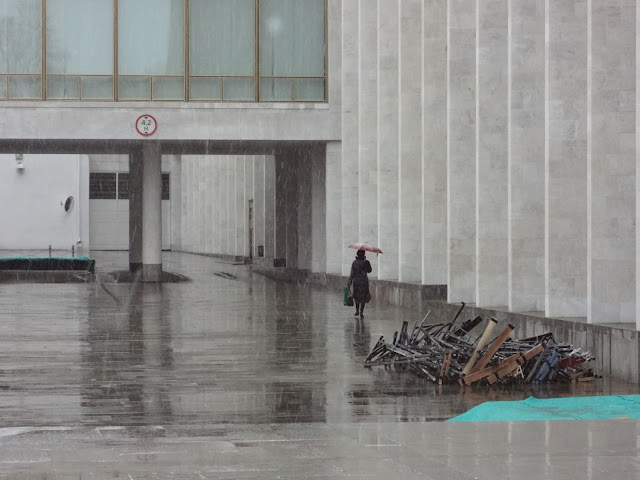 Here's the President's Official Residence!  We're told he doesn't actually live here, but it is still his official residence.  Check out that building to the right of the picture.  It's fake!  Well, the building behind the facade is real but it took me a while to clue in that it was just a facade!  There are a lot of buildings undergoing restoration work in Moscow. 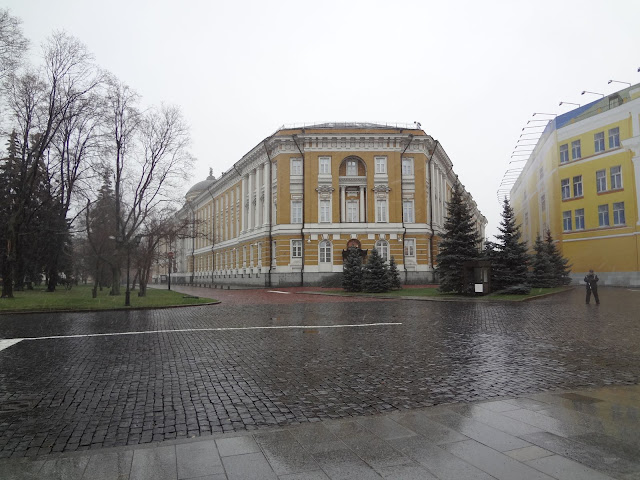 Oh, yeah!  It's the WORLD'S LARGEST CANNON!  I don't know if those are the World's largest cannon balls, but I do know that I don't want to be the one responsible for loading them into that cannon. 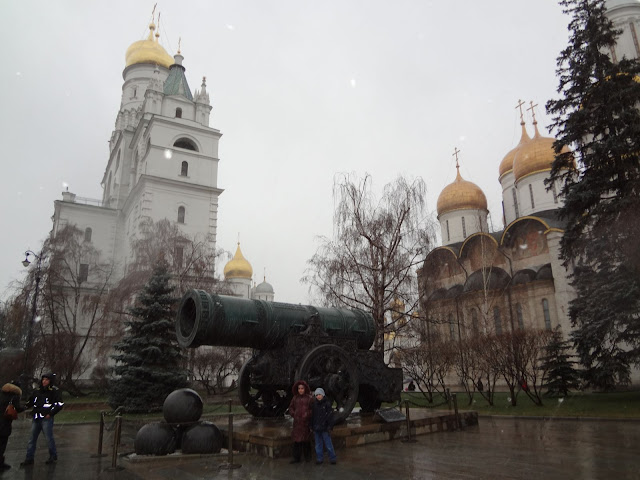 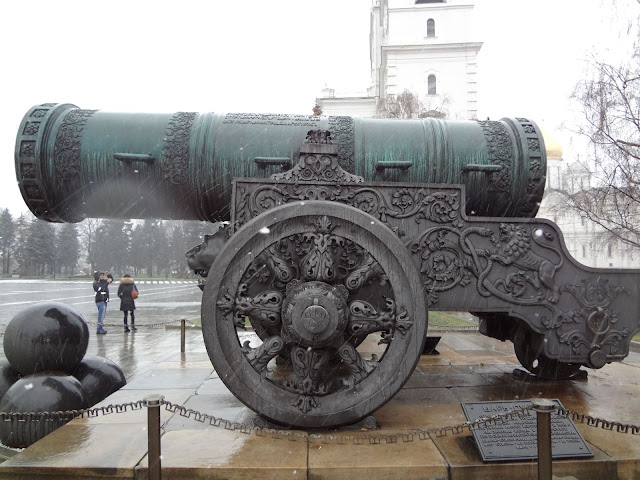 And here's the World's Largest Bell! The Tsar Kolokol III sits, unusable, on a stone pedestal.  A massive chunk cracked off the bell (on the other side) - but not when I was there.  The story behind the bell is fascinating and you can read it here.  By the way, the bell has a clapper (the thing you use to ring a bell).  It wasn't originally built with a clapper but someone thought "you can't have a bell without a clapper".  At least, that's what our fast-talking tour guide told us.  The clapper sits under the bell (behind that gate on the right-hand side of the picture).  The crazy thing is, the clapper is too heavy to lift. 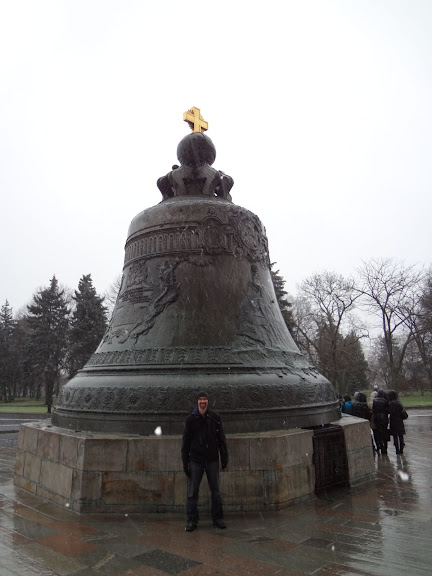 We toured a few of the buildings and saw several religious icons.  Pictures weren't allowed in the interiors, so here are some pictures of the exteriors for your viewing pleasure. 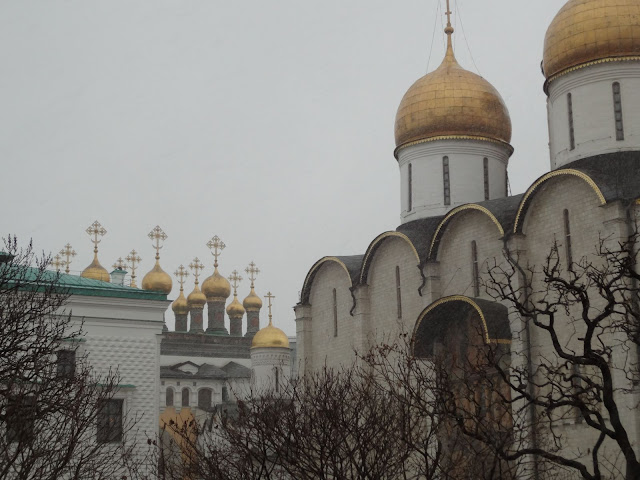 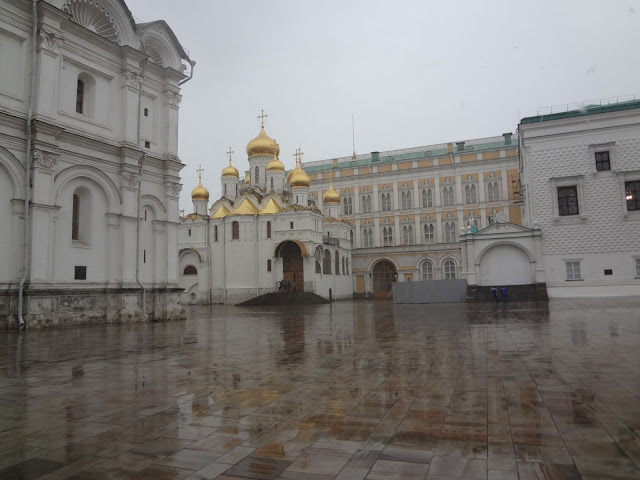 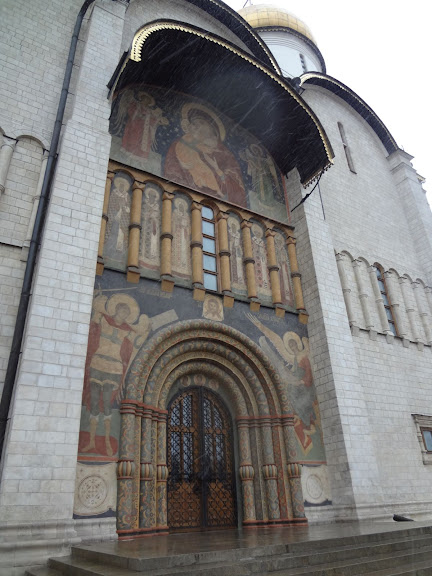 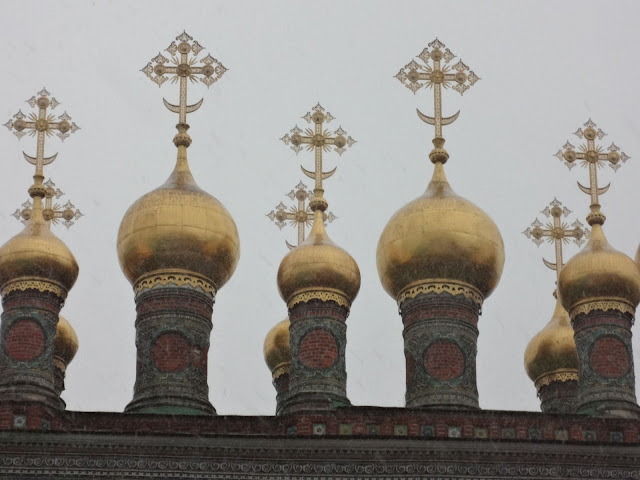 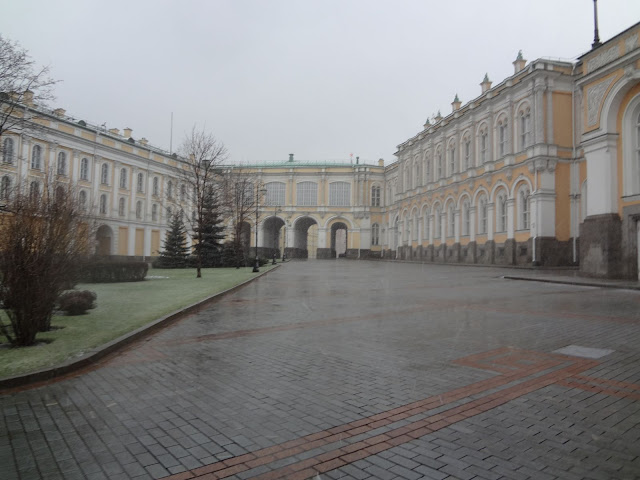 Our guide took us on a tour of the Armory building.  It was fascinating to see the gifts that nations gave to each other, the clothes that people used to wear, the carriages that were used for coronations, and far, far, more.  I saw some Fabergé Eggs, too.  I never understood what made Fabergé Eggs so special, but now I do.

Fabergé didn't make the eggs himself.  He was a project manager.  His company made the eggs as Easter gifts to Tsar Imperial family.  Each egg had a little toy inside.  There was a great amount of thought and meaning behind each egg.  And there aren't a lot of them in existence.  There are 50 known Imperial eggs.  I've seen ten of them.

It was dark by the time we got out of the Armory.  I could have spent hours there, but visits are given time limits. 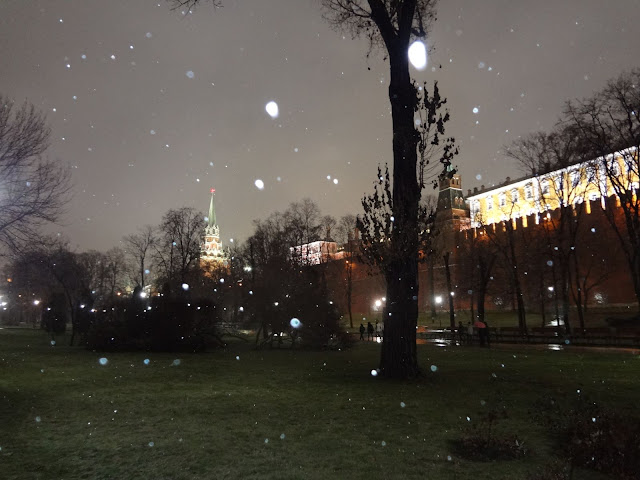 Our speedy tour through Moscow was coming to an end.  All that was left was a ride on the Metro - but I'll save that for another entry.