The Arbat: a Testament to the Power of International Brands

This is the latest in a series of postings about my recent trip to Moscow as I get whisked along by a spritely, speedy tour guide and a rarin' and racing van driver.

Our van dropped us off at the imposing Ministry of Foreign Affairs building. 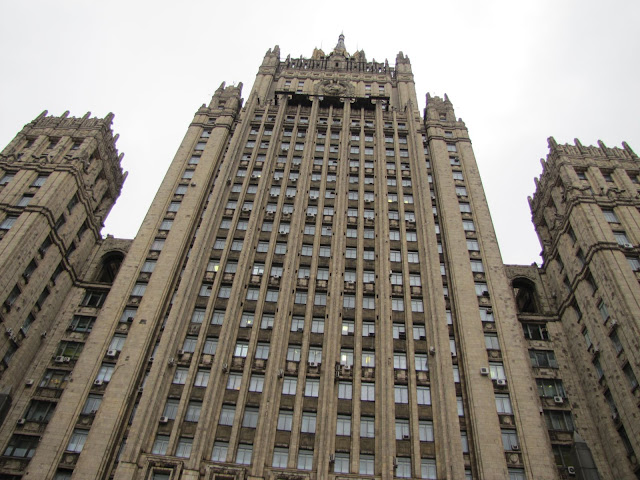 
Would you want to mess with someone who worked in a building that looks like this?  I sure wouldn't. 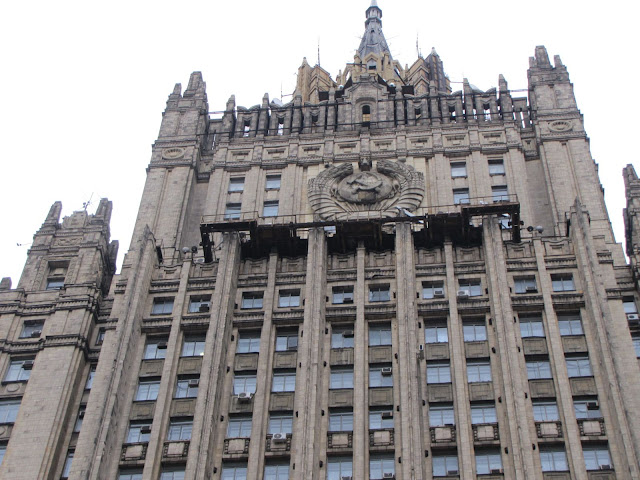 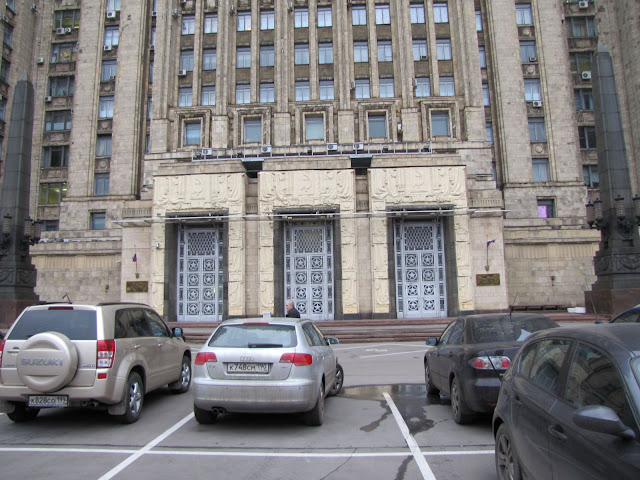 The front doors.  Don't they just scream "Welcome!  Come in for a hot cup of tea!"?


Just around the corner was the Arbat; a kilometre-long pedestrian shopping mall.  Our tour guide informed us that we had 45 minutes to look around and buy whatever souvenirs we needed.  GO! 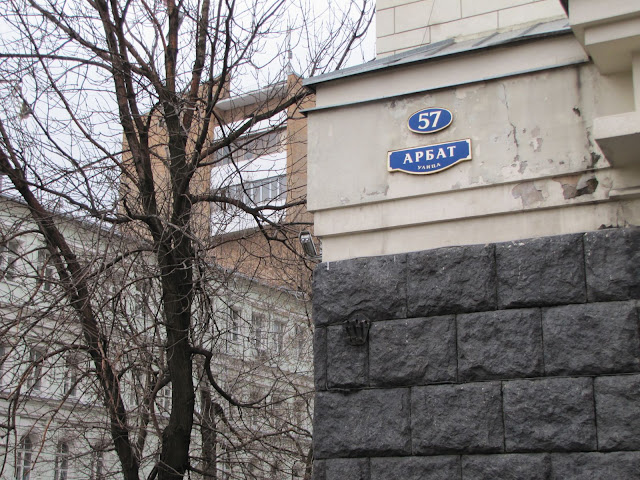 In summer, this mall is a hot spot for tourists.  November is one of the quiet times, which was good for me and the rest of the the people on our tour because it meant that the shops were more than happy to haggle to make a sale.  I have to say, haggling is a lot of fun when you get into it.  At first I felt a little guilty but quickly got over it when I was reminded that the stores will never sell anything for a price that they're not willing to accept. 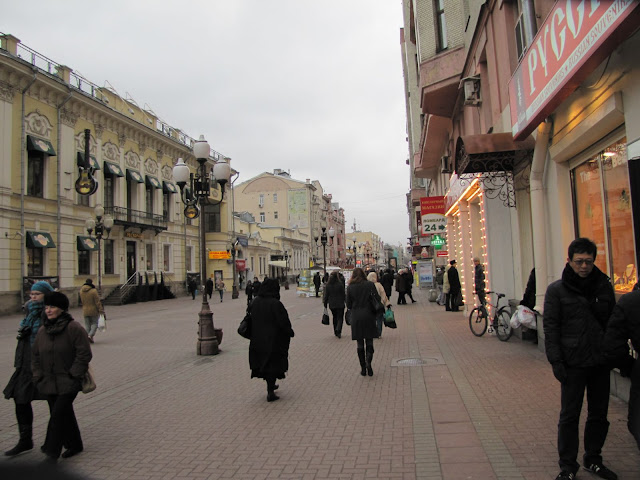 One of the many things about Moscow that surprised me are the buildings.  Old, eh?  Not really.  Many of the buildings use an older architectural style but are sometimes less than just a few years old.  Moscow has been through so many fires and wars that it has had to rebuild several times - it just chooses to build in a way that looks like it still has old buildings! 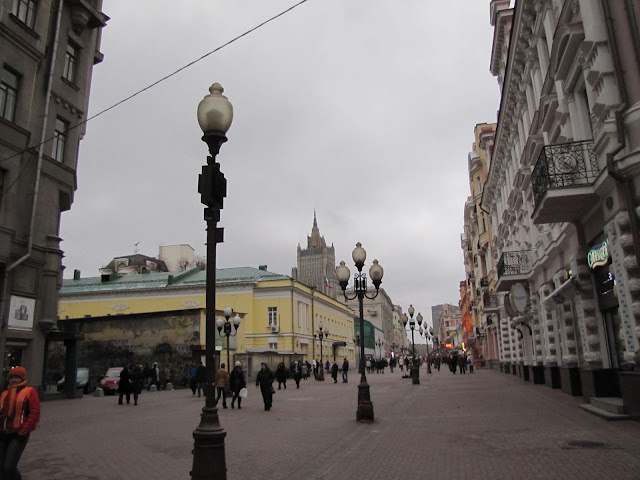 This is a statue of the Princess Turandot.  An old statue of a beloved princess from days of olde, right?  Wrong.  The fountain/statue was completed in 1997 in tribute to the heroine from a soviet-era play.  The play was the signature work of the local theatre.  It must have been a good play to warrant such a fancy statue! 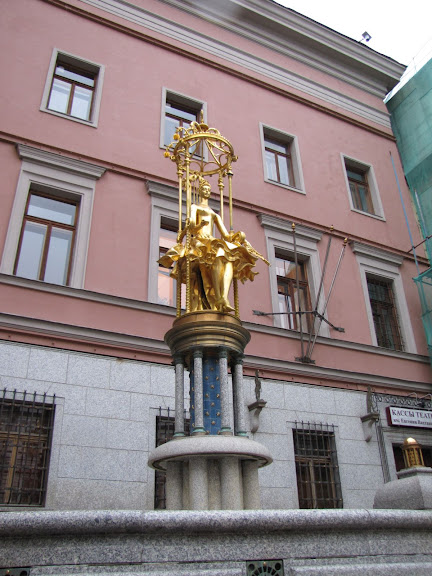 Now, based on what the people in my group bought during their visit, here's the real highlight of the Arbat .  Can you tell what "CTAPБAKC KOФE" means? 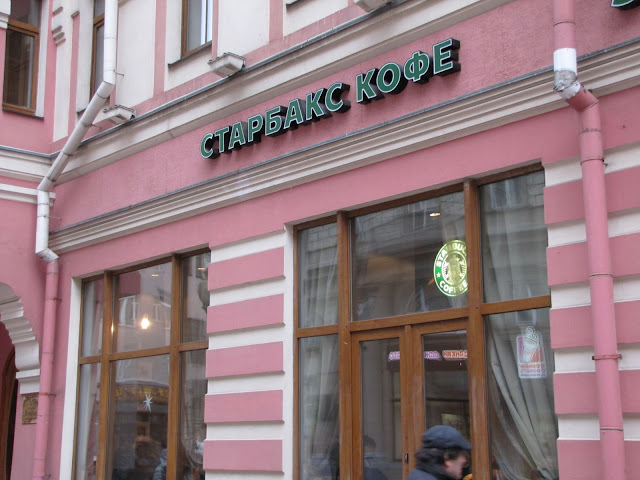 If you take the time to learn how to read Cyrillic (which I'm glad I did), you'll realize that it means "Starbucks Coffee"! 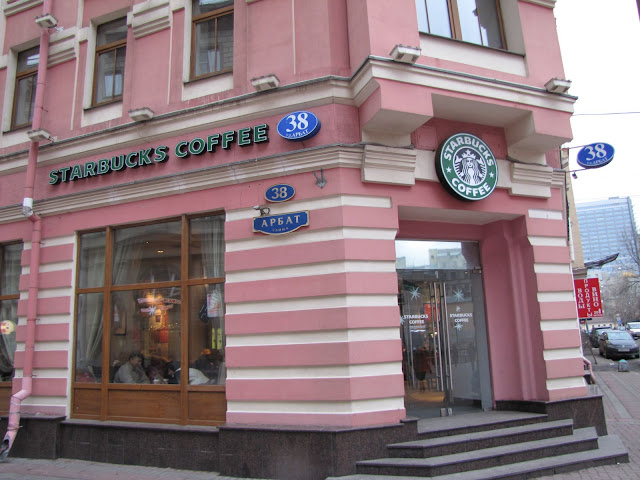 If Starbucks a little to high-brow for you, you can always go to the ДAHKИN ДONATC across the street. 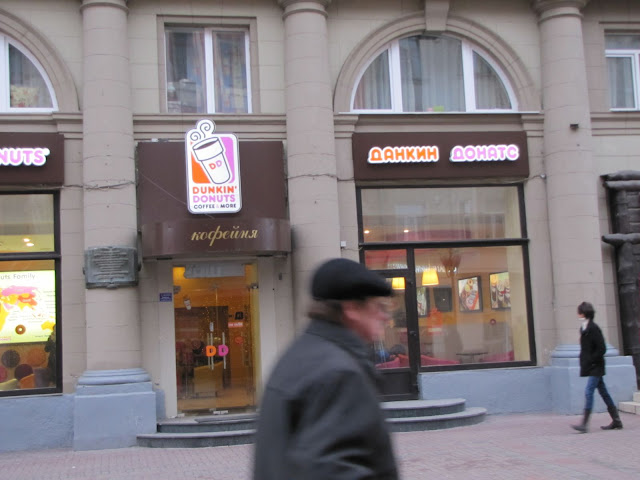 And, of course, there's always MAKДOHAЛДC. 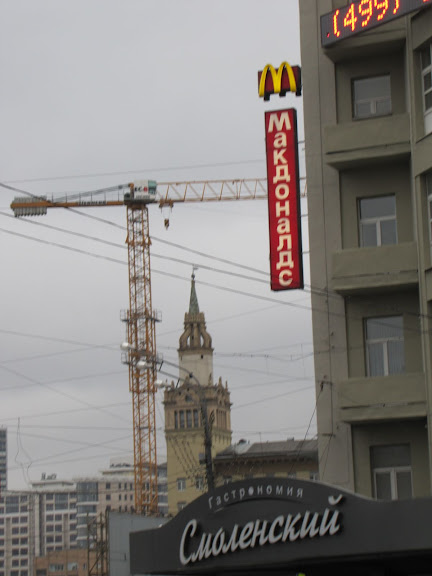 DID YOU KNOW? On January 31, 1990, the first Soviet McDonald's opened in Moscow. At the time it was the largest McDonald's in the world. For political reasons, McDonald's Canada was responsible for the opening, with little input from the U.S. parent company; a wall display within the restaurant shows the Canadian and Soviet flags. To overcome Soviet supply problems, the company created its own supply chain, including farms, within the USSR.


With all of those international brands and my new ability to decipher the phonetically-easy-to-read cyrillic alphabet, I somehow became convinced that I could understand Russian. 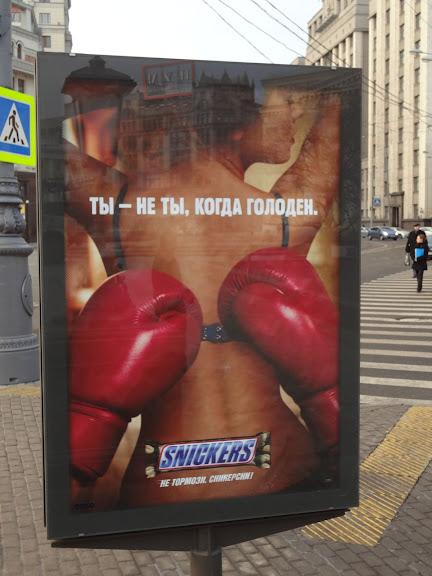 I can read the words, but I have no idea what any of it means.  If you speak Russian, please, please help.

Oh, and as a bonus, here's another "brand-power" photo from the Sparrow Hills. 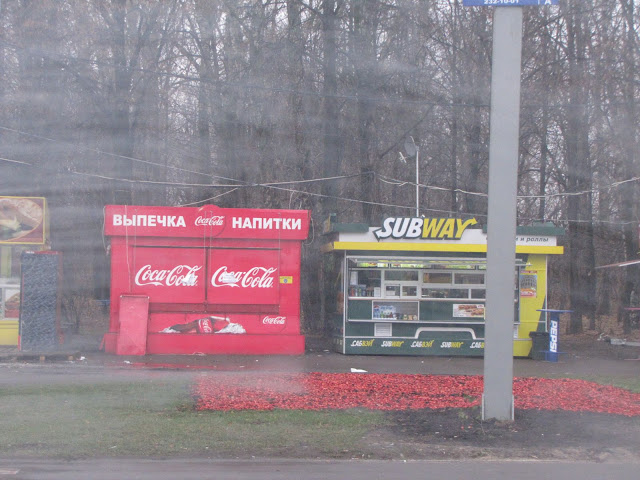 Next up on our whirlwind tour of Moscow is the Red Square and the Kremlin.  Stay tuned!

To Russia with Fries is a fantastic book about McDonald's' (whoa, how do you do a possessive there?!) entry into the Russian market.

These are great. More photos, please!

"You're not you when you're hungry" -- http://www.bestadsontv.com/news/index.php?reg=53. And agreed -- great photos! More!