We're in Vancouver right now for a variety of reasons. One of those reasons was for Jade. It has been a while since her last EEG.

I remember her first EEG well. It was like a little stab at my heart every time I saw the EEG spike. Every spike was a seizure and she was having a lot of seizures. Many of them weren't visible on the outside, but they were happening. My heart got stabbed a lot during that EEG.

The ketogenic diet (and improvements that came with drug weaning and constant tweaking of the diet - including an unbelievable and intolerable couple of rounds at 5:1) has been nothing short of a miracle for Jade. It has been over a year since we witnessed her last seizure, but the worries about the subclinical seizures - the ones we see no evidence of on the outside - remained.

Two days ago, we hooked Jade up for a 24-hour ambulatory EEG. 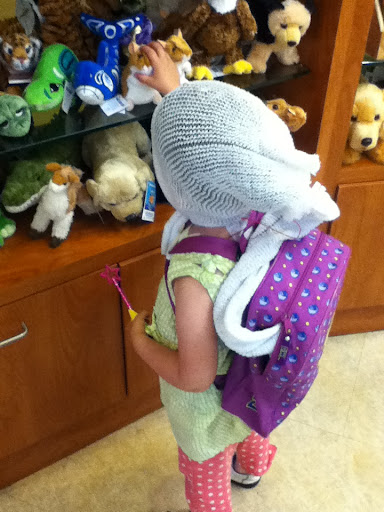 Yesterday we got the results.

While there is still some minor "slowing" in the background, this is not uncommon for a child with Myoclonic Astatic Epilepsy. The big news was that there were absolutely no spikes. None. She's not having any seizures. Her EEG was remarkable for its normal-ness.

Jade has been on a 4.75 ratio for about a year-and-a-half. Based on the excellent results, we'll be reducing her ratio to 4.5. It's the first step in weaning her off the diet. Then, we'll travel to Vancouver in another six months for another EEG to see how things are going with the wean.

All through this experience, I've had what can best be described as a pessimistic optimism - hoping in my heart of hearts that it will work out, but knowing that the worst can happen and mentally preparing for it - but this time I know it's going to work. I can feel it.

this is awesome, excellent, wonderful news! You two are warrior parents. Keep fighting the good fight!

What great news, Michael!! And, boy oh boy, isn't she the little fashionista;)

just read this this morning - tears in my eyes (of happiness). :)