At the end of a modest 20km gravel road in Central Alberta is, perhaps, one of the most incredible but little-known places in the world! The place has so many amazing aspects about it that it baffles me why there aren't streams of tour busses into the area.

Dry Island Buffalo Jump Provincial Park. Long ago, the Cree used to herd bison over the cliffs where they would then butcher the carcasses for food, hides, and tools.  It is the most northerly known buffalo jump.

If we travel farther back in time, the area was riddled with dinosaurs.  In fact, Dry Island Provincial Park contains the most important Albertosaurus bone bed in the world.  Of course, the living dinosaurs are long-gone, but 150 different types of their winged ancestors have been spotted in the area.

Here's one of them. 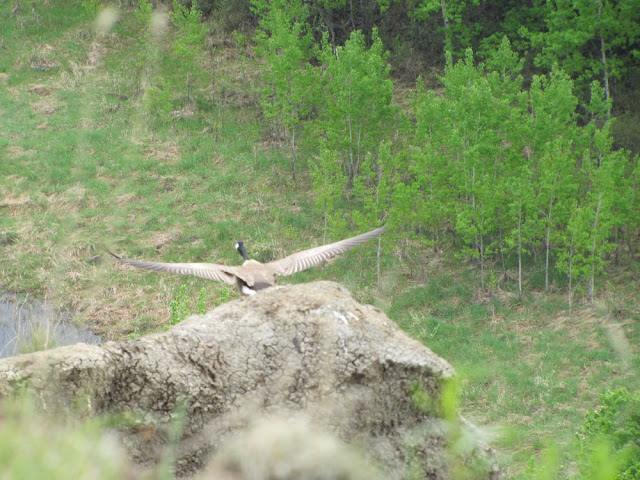 The Red Deer River winds through the park, slowly cutting through epochs of earth.  Exposed by the river and subsequent erosion are layers of river sediment from distant mountains, ancient bogs, volcanic ash, and ocean. 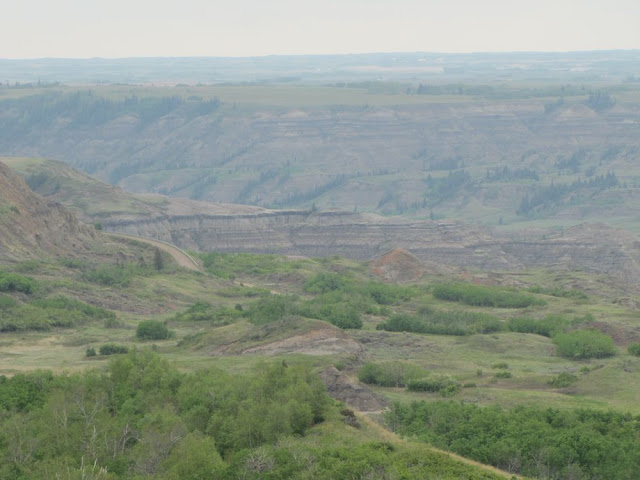 The park gets its name from a mesa - a large plateau of land 220m above the Red Deer River.  It's called a "dry island" because it has never been surrounded by river.  It was formed by a slow erosion process.  The top of the mesa is unusual in that it retains virgin prairie grasses because it has never been developed by humans or used by livestock.  They contain unique flora and fauna not otherwise found so far east of the Rocky Mountains in such large numbers. 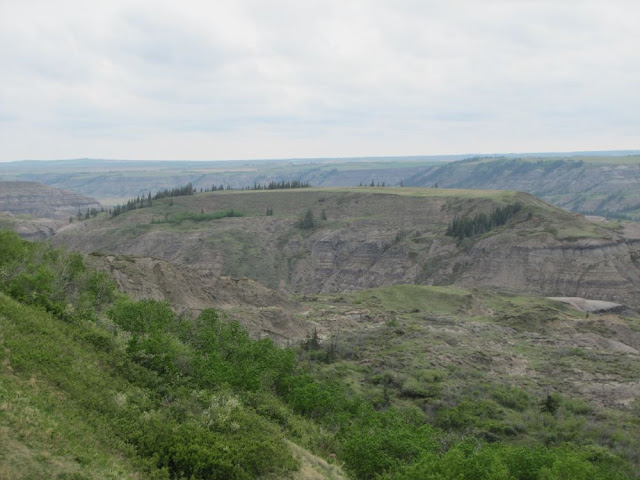 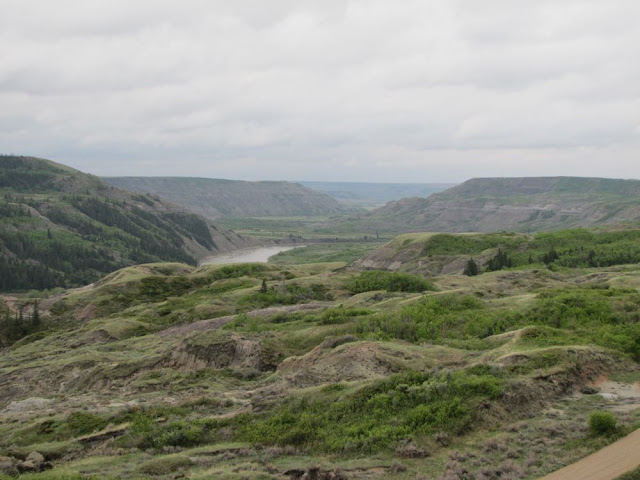 Bentonite, ancient volcanic clay ash, is prolific - and when it gets wet it gets very, very slippery.  This artistic patch of ground had a little more traction, fortunately, so I didn't wipe out as I was exploring its nooks and crannies. 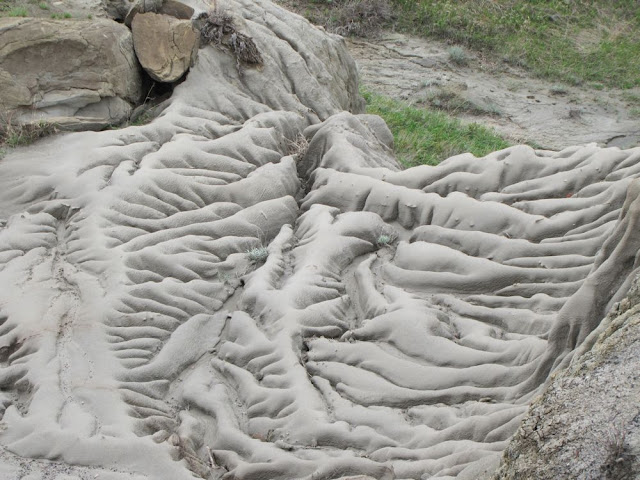 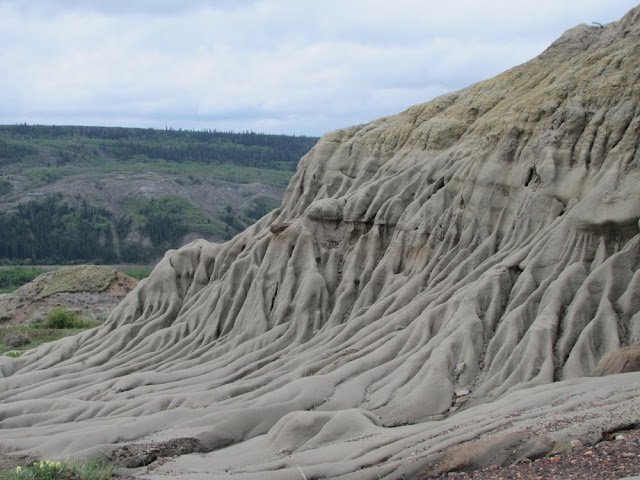 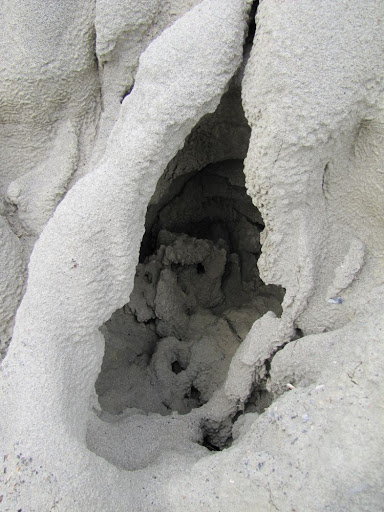 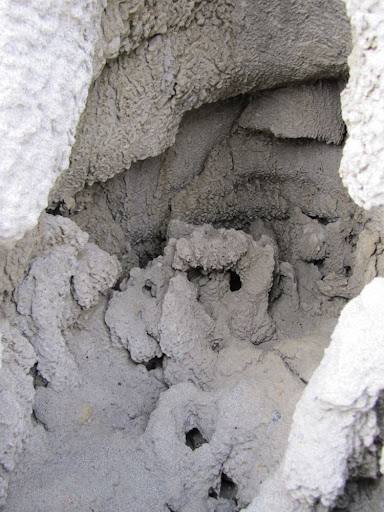 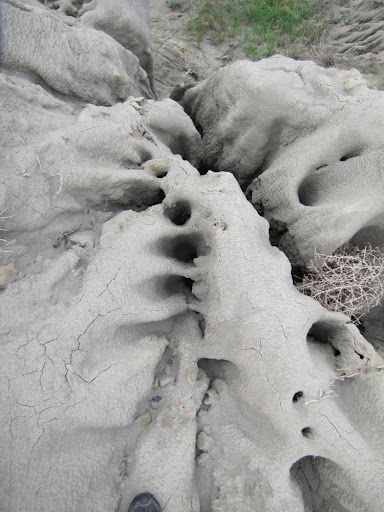 I love badlands-type country.  I love the sculptures created by wind and water moving over the earth. 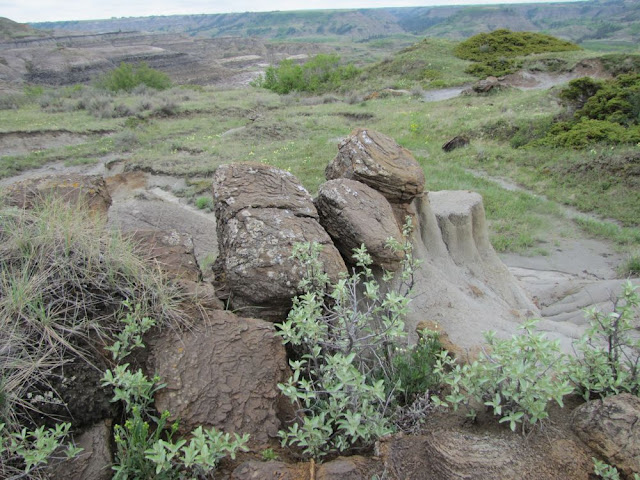 And I love the little surprises - like this strange plant?  fungus? growing in a juniper? plant.  I saw several of these, always growing in the same type of plant.  They seem to have some sort of symbiotic or parasitic relationship. Can anybody tell me what it is? 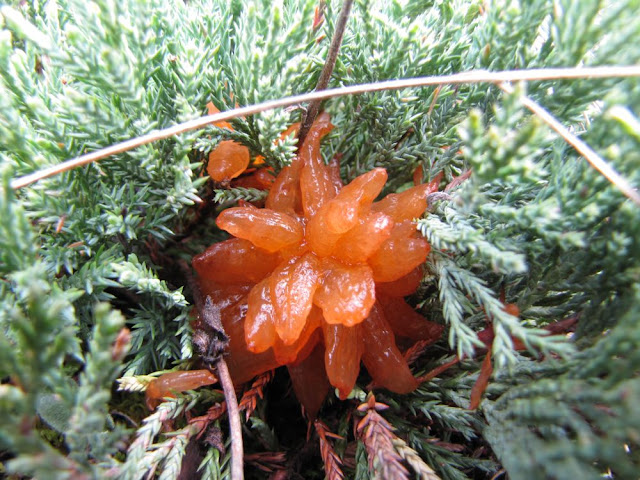 I walked down into the valley and strolled along the base of a cliff.  A buffalo jump, perhaps?  There are many locations in the area that could have worked for that purpose. 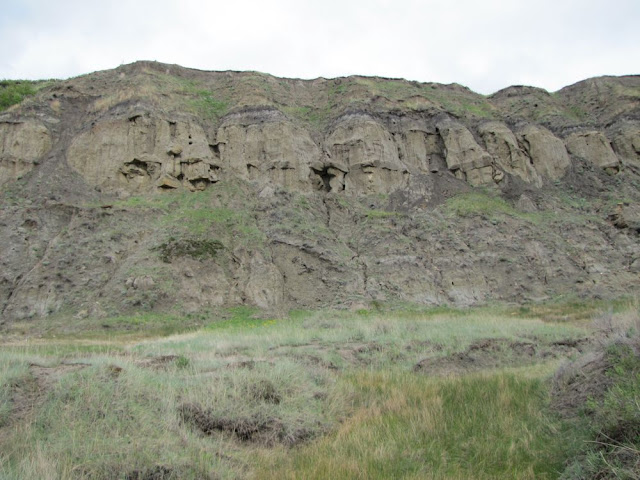 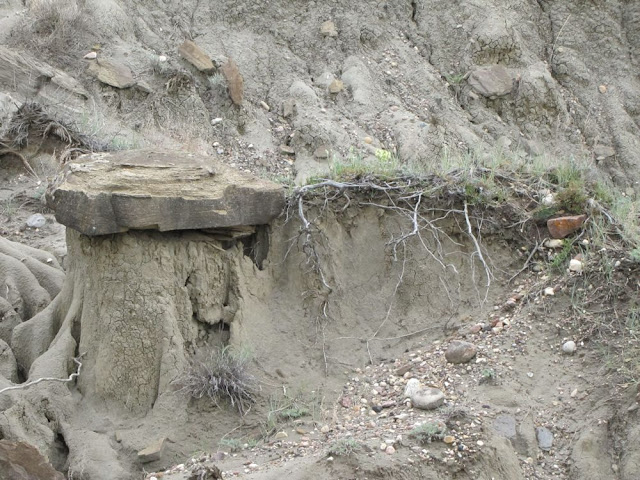 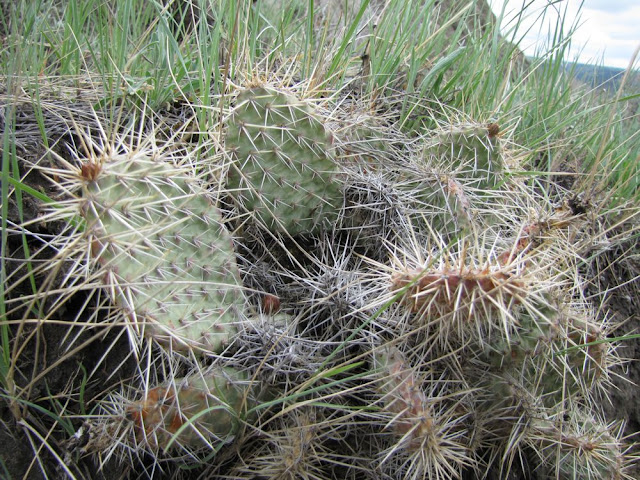 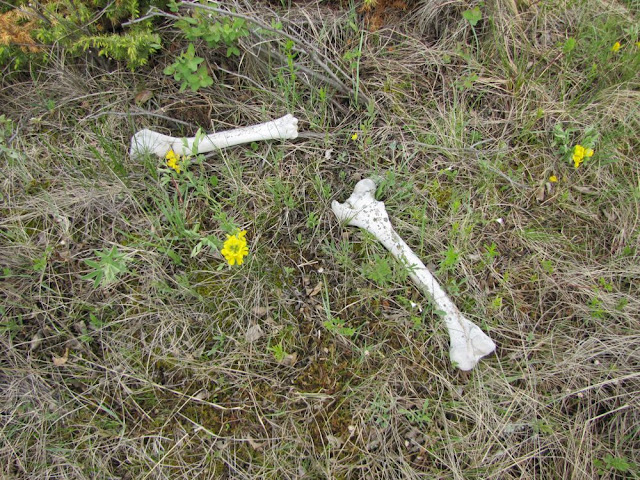 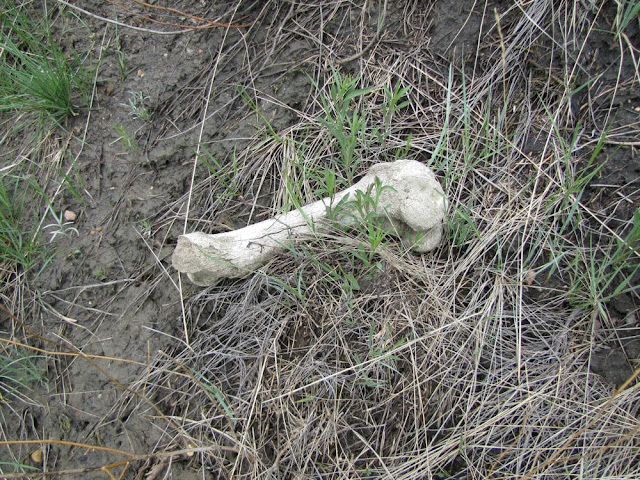 And then there were the bones of a more modern age... 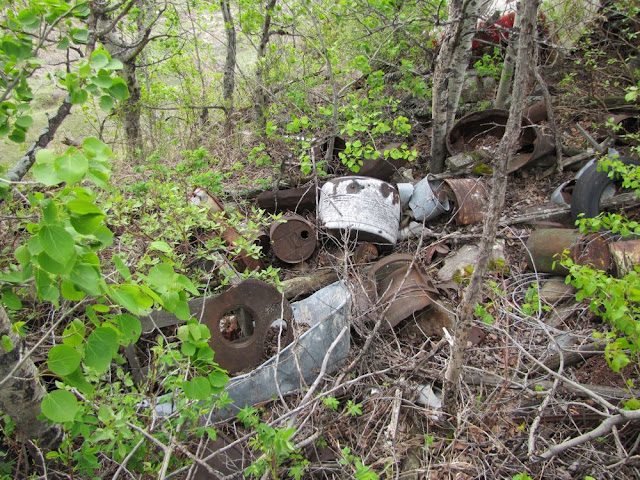 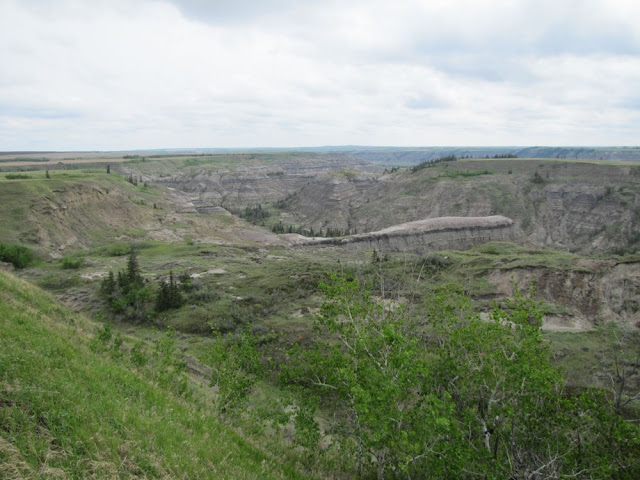 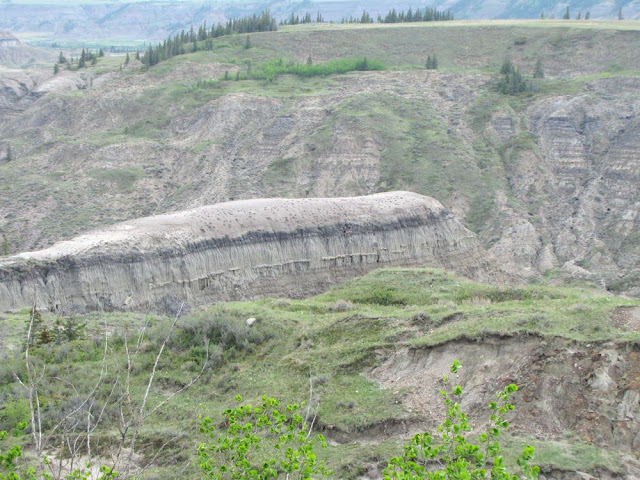 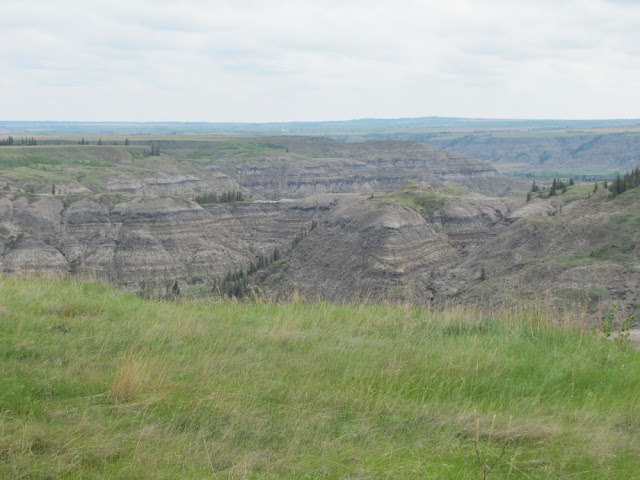 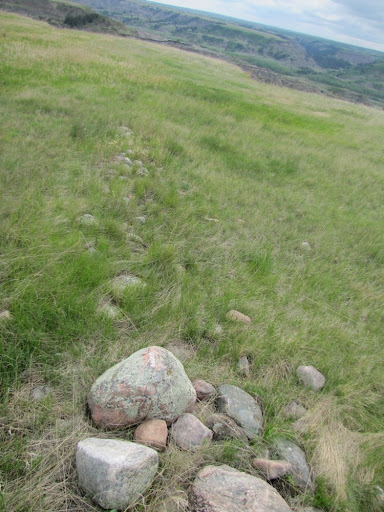 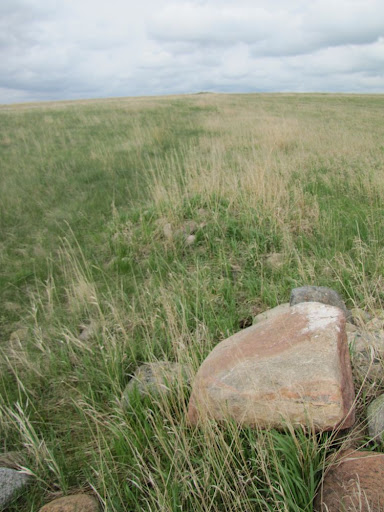 Back at the rental car, I made my way back down the gravel road and on to my next destination: Drumheller and all of its dinosaury awesomeness. At the end of the day though, I couldn't help but look back and think that I should have spent more time at Dry Island.

Such a cool place.

I love Head-Smashed-In Buffalo Jump but had never heard of this one. Very cool, and now added to The List :)