How to Identify a Yukoner

When I checked in at the airport in Whitehorse, the agent asked me for a second piece of government ID. You see, the old Yukon driver's license - which I still have - is nothing more than a (probably) easily forgeable piece of paper between two sheets of laminated plastic. 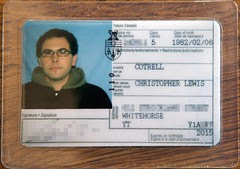 Chrisopher, I don't know you but thanks for posting a photo of your driver's license to flickr so I could use it here. If we ever meet, I'll be sure to thank you in person. Please note that "fakeidfree.com" is also using your picture.

Now this guy I know and I assure you that his name is NOT John Joseph Sampledriver. But I wouldn't blame him if he adopted the name. It has a nice porn-star ring to it.

Now, the interesting thing about the agent asking me for a second piece of ID wasn't because my ID was nothing more than a (probably) easily forgeable piece of paper between two sheets of laminated plastic, but because my driver's license didn't indicate that I am a male.

That's right, the old ID doesn't show that I am of the XY persuasion.

So, I pulled out a piece of ID that did.

But, really, that still doesn't prove anything.  We'd need a pat-down or a body scanner or a strip search for that.

But why the heck does it matter anyway?!!?

"Oooh! A transvestite! S/he must be a terrorist!"

Your post mad me laugh. My last British Columbia driver's license had me as a male the entire 5 years I had it. I always meant to go in and change it but never did, until last July when it came up for renewal. Luckily I was never stopped by the police and I always use my passport at the airport.