This year, I thought I would break with my long-established tradition of covering my head with shaving cream and scaring kids. I didn't carve an elaborate pumpkin, either.

This year, I decided to mix things up a bit. I covered my head with a carved pumpkin and scared kids.

Looking at the picture, it's pretty obvious that the "scarecrow" is someone dressed up with a pumpkin on their head. After all, who would be crazy enough to leave an enormous bucket of candy guarded only by a sign that reads "Sorry, we can't come to the door. Take only 3"? 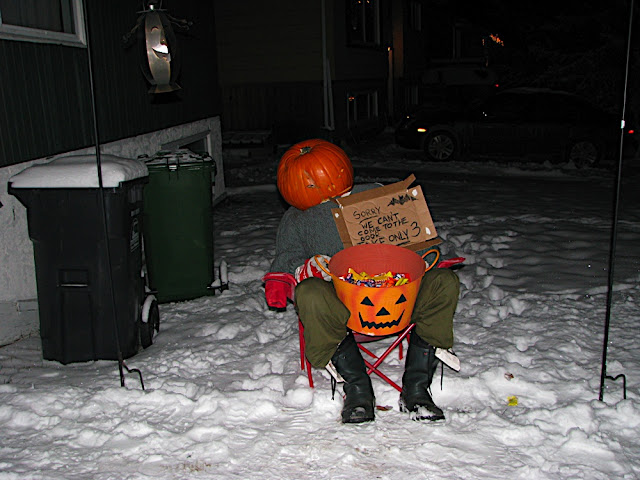 Peter Pumpkinhead
But when it's dark and you're a kid with your eye on the prize, you only notice the things (like the pillow and newspaper stuffing) that you want to see. You don't notice the bent rubber boots or the knees that look an awful lot like, well, human knees. You don't notice that, at that angle, the pumpkin should have fallen off of the scarecrow's shoulders.

With my head stuffed into the pumpkin, I couldn't see anything, but I could hear what was going on up and down the street just fine. I struggled to stay perfectly still, lest my movement give anything away. My neck strained under the weight of the pumpkin.

As in previous years, we didn't get many trick-or-treaters. It was worth it, though. Every batch of kids got their fright of the night. There's something immensely satisfying about scaring kids (and their parents) and hearing them laugh and talk about it excitedly all the way down the street.

An interesting side note, every single kid counted out the candy they took from the bucket. "One, two, three."

You are awesome!! Did you get any of this action on video?

Okay, that is one fantastic idea! You look awesome!! We didn't get many trick-or-treaters either: just one.

I love it! When the children were asked for a "trick" before they got a treat one sweet little four year old said "I will wash your dishes and paint your toenails". I had a hard time keeping a straight face. She got a whole handful.

Kara: Alas, there was no hidden camera.

Jennoit: Just one?! I thought we were in the same neighbourhood! Wow! I guess it depends on which street you're on. We got, maybe, 15.

That was awesome. I wish I could have seen it.

Also, very impressed with the honesty of your town's kids. :)

You would LOVE Halloween on our street. Everyone (this year almost 40 kids and lots of parents) met at our end of the street (a cul-de-sac 3-4km long). There were 5 trailers and several cars full of people. It's a very social event for everyone. FUN!!!!!