Ungulates of the Alaska Highway

The Muskwa-Kechika Management Area of Northern British Columbia, through which the Alaska Highway passes, is better described as "The Serengeti of the North". It is teeming with wildlife. Every drive I've taken through the area has been rewarded with up-close views of big game (while staying in my vehicle, of course - ungulates may be herbivores, but that doesn't mean they're not dangerous - especially the bison and the moose).

I saw a mule deer on my trip along the highway this past week, but didn't bother taking a picture of it. I saw lots of other ungulates, though! Here are some pictures of what I saw: 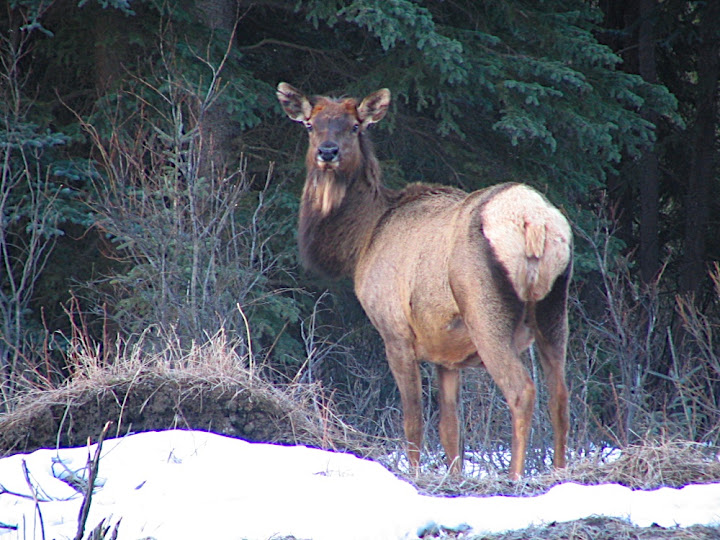 This elk is part of a herd that has been hanging out just east of Summit Lake. 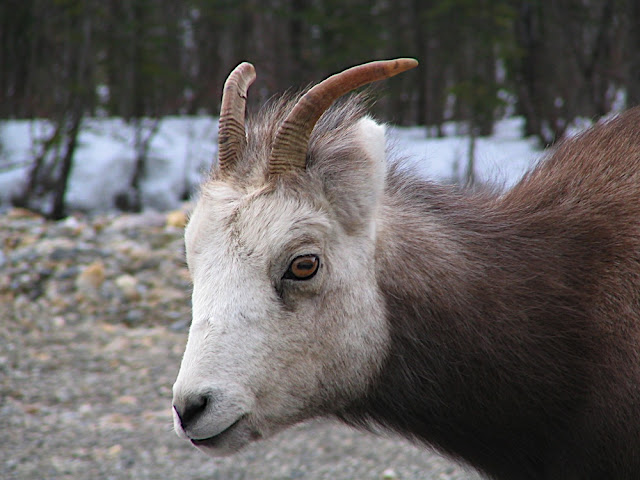 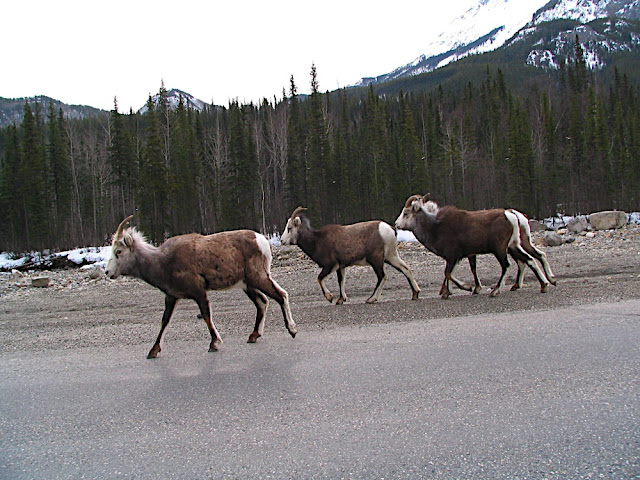 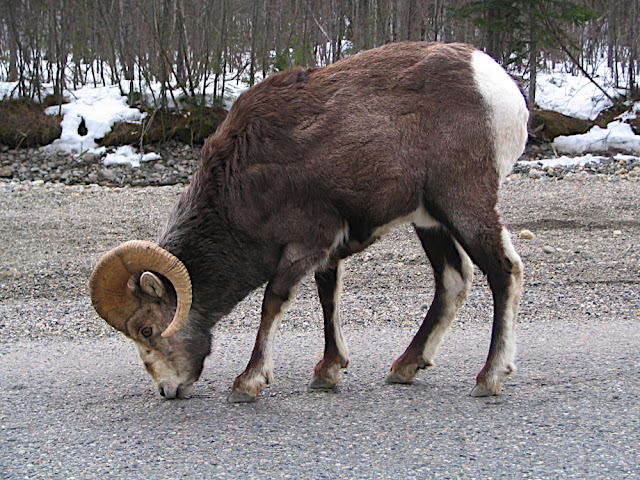 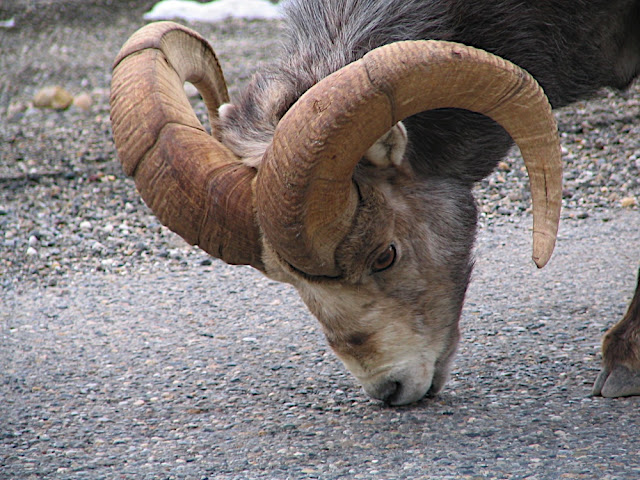 Licking minerals off the road to make those horns grow. Yum, yum, yum!
Although the following bison pictures were taken near Fort Smith, NWT in Wood Buffalo National Park, I assure you that there are lots of bison near the Liard Hotsprings on the Alaska Highway. In fact, the Liard bison are descended from transplanted Wood Buffalo herds. Driving through the Liard Hotsprings area at night is not recommended - I've seen what those things can do to an H2 Hummer! 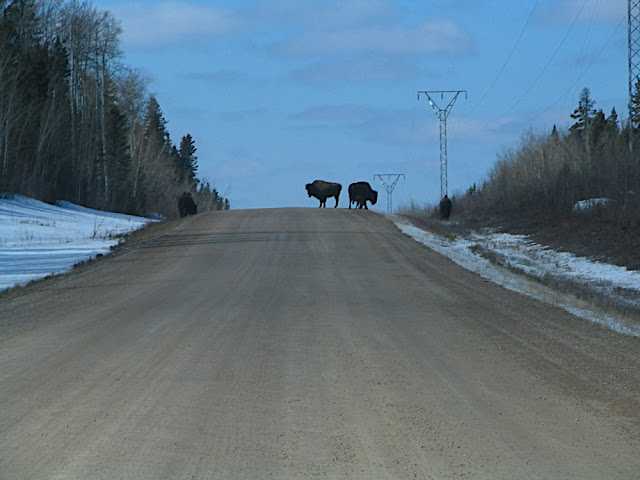 Roadblock (just a small one). 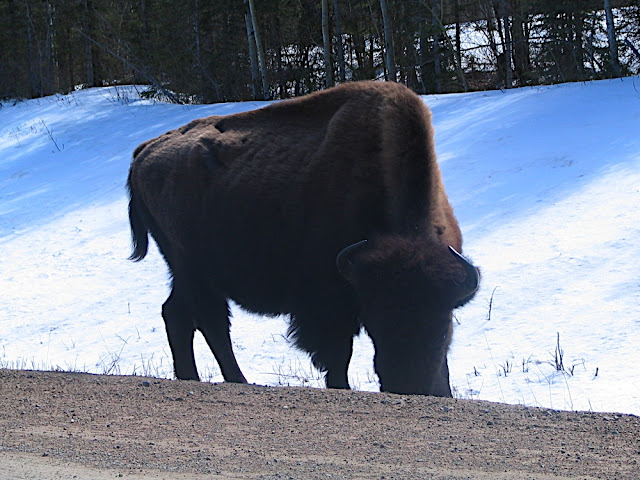 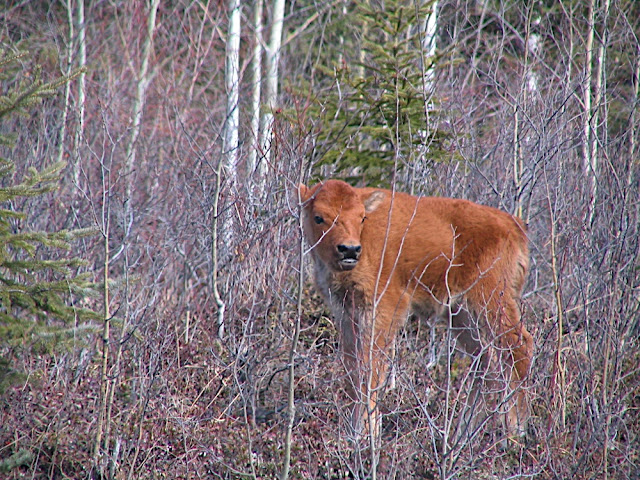 A bison calf. Isn't it cute? This was a noisy one. It kept "mooing".
When I used to drive by Fort Providence, NWT in the springtime, I would always get a kick out of the "bison mushrooms" along the side of the road. As the spring sunshine warmed the bison droppings, the snow would melt around the base leaving a supporting column of snow in the bottom middle of the dropping where the sun couldn't reach. It essentially made a mushroom with a bison-dropping cap and a stem of snow.

Sadly, a lot of bison - and sometimes people - are killed along the Alaska Highway near the Liard Hotsprings by nighttime bison/vehicle collisions. On my drive, I noticed that, as the spring sun melted the snow, it revealed many rigor-mortised bison victims supported by a columns of snow where the sun couldn't reach - just like the dropping mushrooms. The similarity to the dropping mushrooms was uncanny, and I was amazed that the snow could support so much weight - but it was very macabre and I'll never again be able to look at bison dropping mushrooms without remembering the carnage. It's unfortunate that people won't slow down when they go through the area at night. 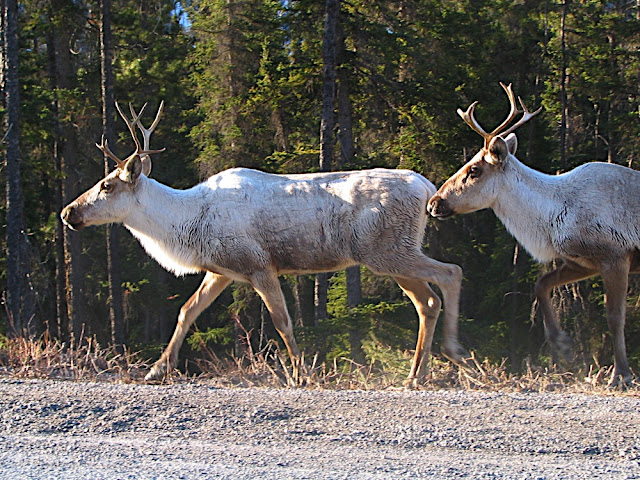 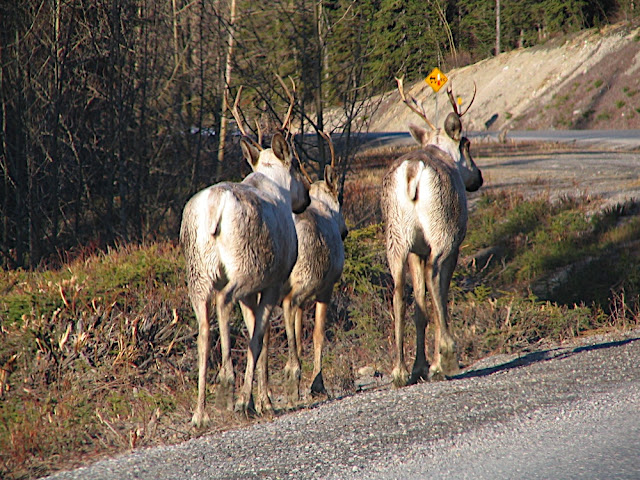 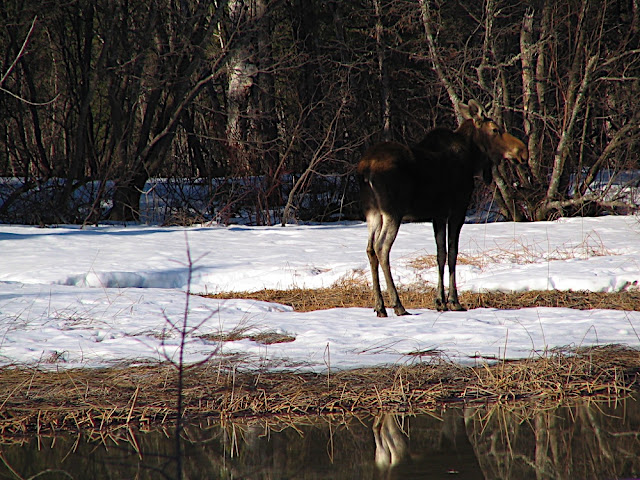 Even though there were a dozen cars parked less than fifty feet away, this moose was enjoying the minerals and good food at the Liard Hotsprings. 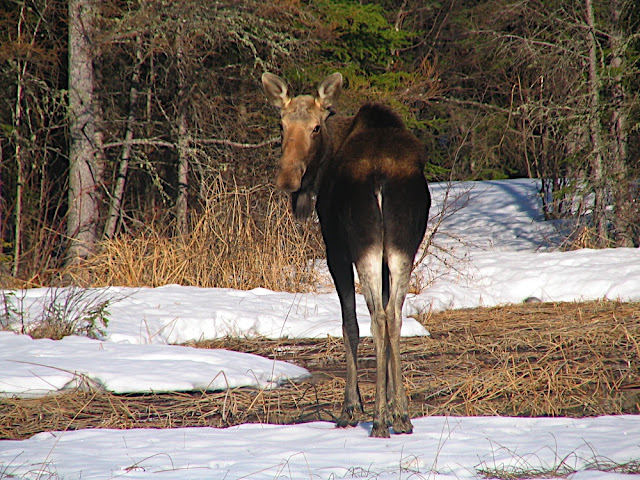 The End.
In the next post, I'll show you what might have happened to this moose if it hadn't been standing in a provincial park.

Wow, I am amazed that there would be carcasses left after bison/vehicle collisions. When ever we had one at Fort Providence we'd get a team out from town to carve it up for the community. We had 28 Bison killed my first fall there, amazingly no people.

They have to be amongst the worse animal for vehicle strikes I know. First of all they are afraid of nothing, and own the road, they won't get out of the way with horns and sirens blaring if they don't want to. Secondly, they have very little eye shine, like other ungulates, giving little warning. Then there is their colouration which disappears in the dark, made even worse in snow falls. The snow won't melt off their back, making them look like snow drifts on the highway.

Mushrooms notwithstanding, bison ranks as the best roadkill I've ever, ever, eaten.

I didn't see any dead bison along the road to Fort Smith, Mackenzie, or Liard Highways - it was only on that stretch near the hotsprings. I think the meat goes to waste (well, the ravens seem to enjoy it and I know the bears do, too) because it's 2-3 hours from a population centre that could use it. The tiny hand-full of people who live at Liard River and Muncho Lake just couldn't keep up with the supply.

I like to refer to those "mushrooms" as hoodoos (as in from the badlands), POO Hoodoos! There are also garbage hoodoos, but I've never seen a freakin' bison hoodoo!!!!

Poo Hoodoos (or "poodoos" for short)! That's the PERFECT name for them!

Ha ha, this was a pleasure trip (for the most part - I did a little bit of business-related stuff along the way). Upcoming trips include Beaver Creek, Old Crow and.... Ross River!