Returning from the grocery store...

Many of the community's Dene residents pursue, at least in part, a traditional harvesting lifestyle - obtaining from the land. I have heard it said by many Dehcho residents, on many occasions - although sometimes in slightly different ways - that "the land is our home. It is our grocery store. It is our church. It is our life."

Although most of the community members buy food supplies from the local stores, a substantial portion of the community's meat supply comes from hunting, fishing, and trapping.

And that old cliche about "none of it going to waste"? I assure you, it's true. 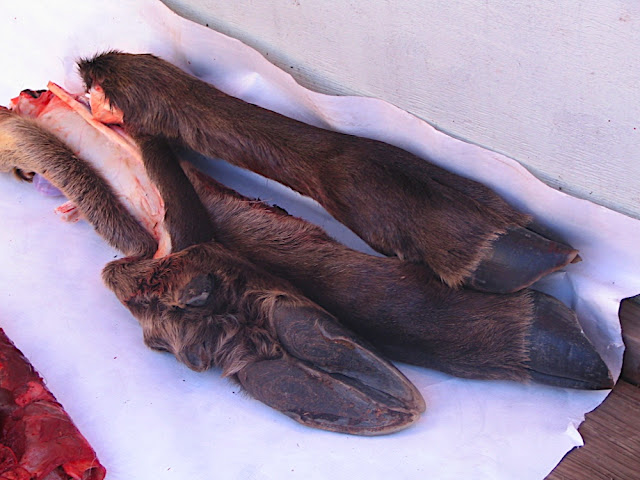 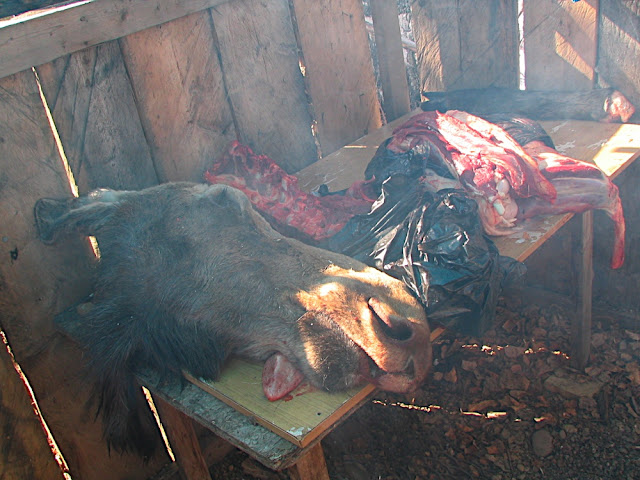 Moose nose and tongue are delicacies. The brain will be used to tan the moosehide. The head will be boiled or roasted. A raven already got the eye, so nobody else is going to get to enjoy that, unfortunately.
It's a lot of work to cut up a moose. Some of the meat will be frozen for later. Some of it will be cut thin and hung to dry for drymeat (dried moose meat is delicious and it's even better with a little bit of salt and lard). Much of the meat will be shared with other community members. 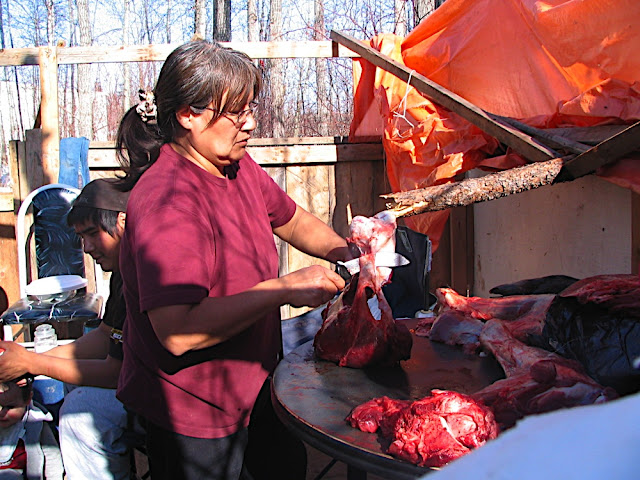 Helena cuts the moose meat. She's so good at it, she puts professional butchers to shame. 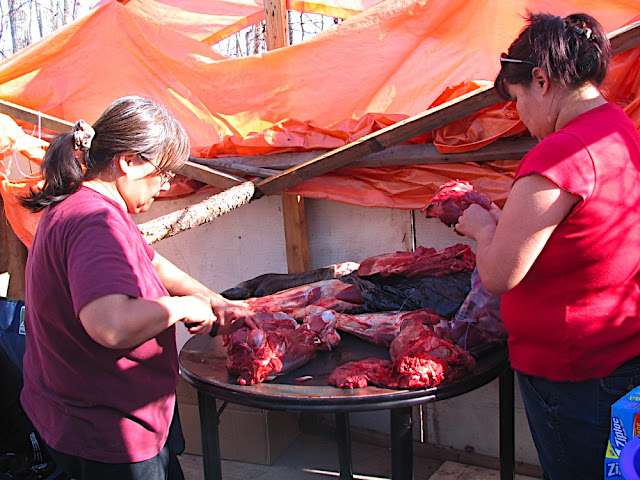 Mother and daughter, Marlene, hard at work.
The sharing of meat is a very important part of Dene culture. Sharing, especially the sharing of meat, is one of the Dene Laws. After word gets around about a successful moose hunt, its not unusual for people to start showing up to help cut the meat and take some home for their family. The meat is not sold and, if it is, the seller is not looked upon kindly. One moose feeds a lot of people but, really, the moose is more than just food - it's a community and cultural institution. 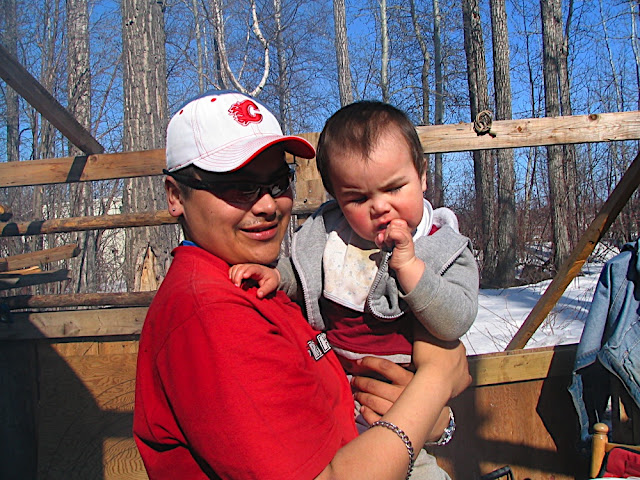 Arthur and son, visiting and enjoying some moose meat.
Once, I loaned my snowshoes to a couple of hunters who were going to track down a moose. They were successful in their hunt. When they returned my snowshoes, they told me to drop by and get some meat. I didn't because I was too shy. (Yes, me, shy.) I didn't know how much was appropriate to take. I didn't want to be rude. I mentioned that to someone and the next day, one of the hunters showed up with a garbage bag full of freshly cut meat, handed it to me, and said, "Next time, come and get it." Lesson learned! 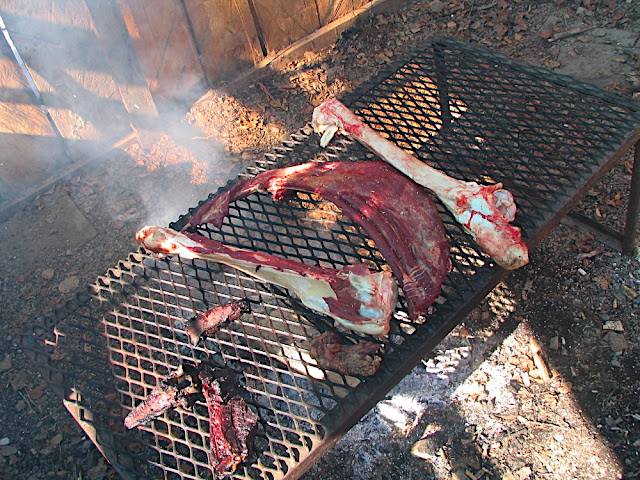 Various delictables on the fire. Notice the bones? After they're cooked, they'll be split length-wise with an axe for the marrow.
As the moose is cut, various delectables are put over the fire to cook. During my visit, I partook in moose heart, bumguts (intestine, which is may sound gross but is fantastic when cooked over a fire), and marrow. Delicious! When I bit into a piece of moose meat, right off the fire, I marveled at its incredible flavour and juiciness. No restaurant could ever hope to duplicate the exquisiteness of that fresh, fire-roasted meat.

The moose meat, bumguts, heart, and marrow that I ate during my all-to-brief visit sustained me long into the night on my drive back to Whitehorse.

And, of course, I was given some to take with me.

Email ThisBlogThis!Share to TwitterShare to FacebookShare to Pinterest
Topics: Liard

Nothing, absolutely nothing, beats fresh meat roasted or fried over an open fire. We are the lucky ones who get to experience that!

I wouldn't want to eat it. I wouldn't want to cut it up or handle it, but I applaud any one who uses all parts of anything. If you're gonna kill it, use it.
I read a biography of Daniel Boone and it talked about the French hunters killing hundreds or more buffalo at a time JUST for the tongue! What a waste (and stinking rotten mess!)

I came acros this blog looking at moose meat pics... as I ate bumguts for lunch (moose intestine). The blog and pics were great as was your wife's bog and her story about Jade. Best of luck and best wishes for health and happiness.

To Jennybell!
why did you come here if you're going to talk like that man! And yes we eat and cook over fires but atleast we're not lazy to get up and make a fire and start cookin up some moose meat LOL!
And Fireweed Roots you are right! we are lucky because if we get lost then we know how to survive

Hey "someone", simmer down!

Jennybell didn't say there was anything wrong with hunting moose or eating it -- she just said she wouldn't want to do it herself. Lots of people I know are squeamish/nervous about butchering. (It's sad, considering they do eat meat, but that's how things are now...)