The Porcupine River flows northwards out of Yukon's Ogilvie Mountains, north of Dawson City, then veers southwest, into Alaska, before meeting with the Yukon River at Fort Yukon.

In Gwitchin, the river isn't actually called the "Porcupine River". The translation of "Ch'oodeenjik" is more like "Porcupine Quill River".

The Porcupine isn't just any river; it constitutes a large part of the migration route for the Porcupine Caribou herd (hence the name of the herd). The herd winters in the NWT and makes its way to the North Slope of Alaska every spring for calving. On their way, they pass by Old Crow.

The people of Old Crow depend on the caribou as their primary meat source. I have heard several people speak with disdain about expensive and less-healthy food from the south. One lady told me that they need about two caribou per person in the spring and two more per person in the fall, when the herd migrates back to the wintering grounds.

It's springtime and, this year, the herd of over 100,000 caribou is late. People are anxious.

The caribou might be late because of the snow. There was a lot of snow this year and it has been slow to melt because of the cool spring. When that happens, the snow gets crunchy on top but soft underneath. It's hard on the caribou's legs when they break through the snow. It's not just hard for them, it's dangerous. The hard layer of snow can break or bloody the caribou's legs, and that would be the end of the injured caribou.

A few caribou have come through - cows, eager to get to the calving grounds - but the bulls - the ones who are hunted at this time of year - have been slow in arriving. They're just not under the same kind of pressure. Until they do, people will continue to stare longingly along the riverbank and take their boats up and down the river. 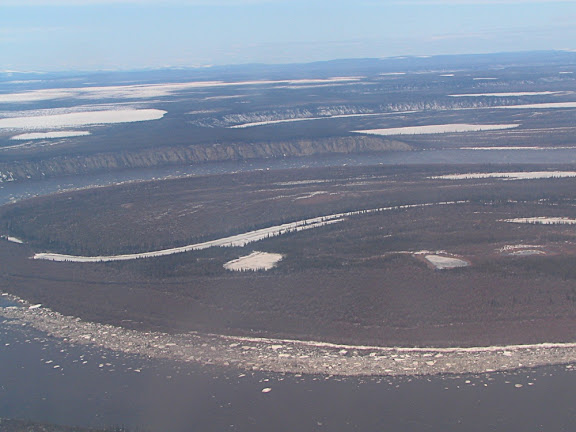 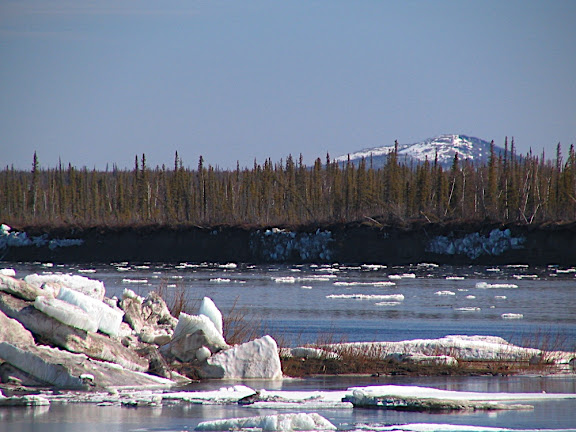 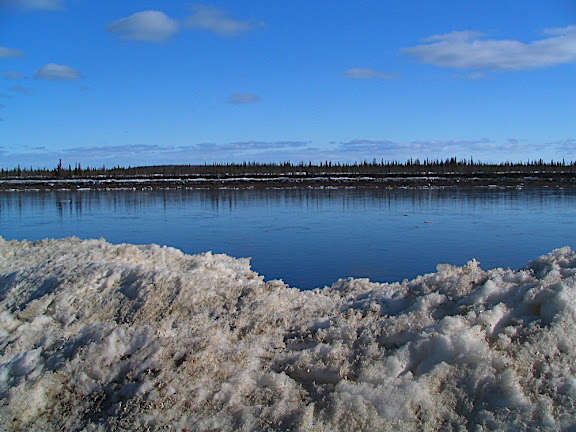 A long crossing - one that's braved by the caribou. 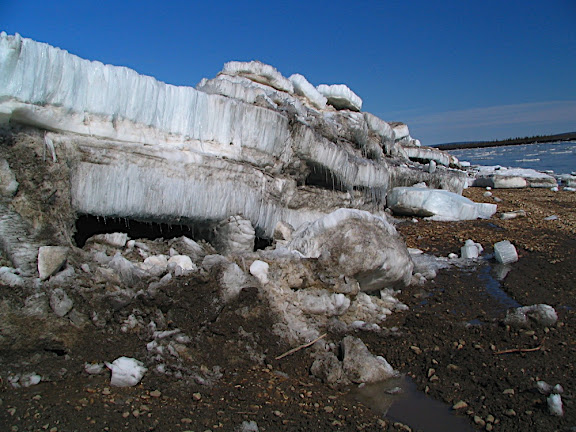 A mass of river ice, piled high during the breakup. 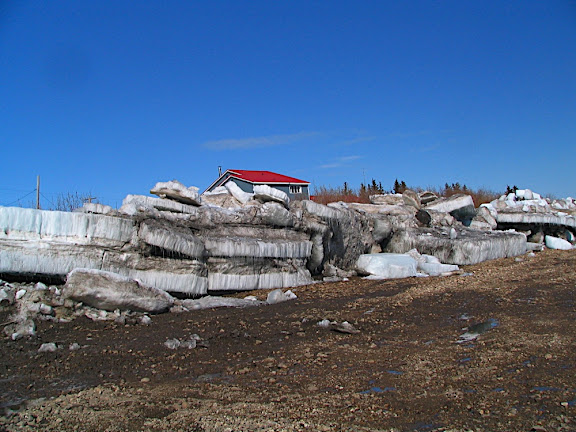 See that house back there? Yup, that's a lot of ice. 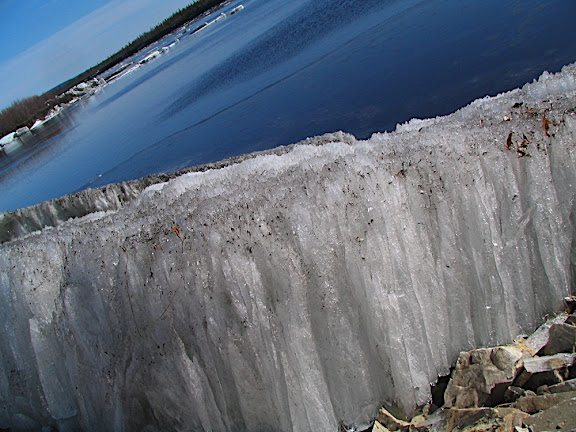 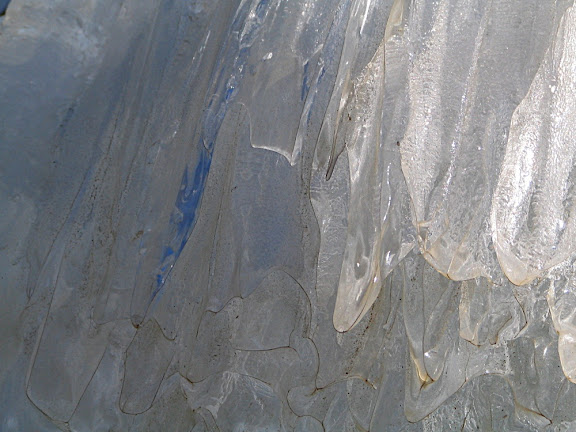 I love the shaft of blue light through that piece of ice. It looks like a crystal. 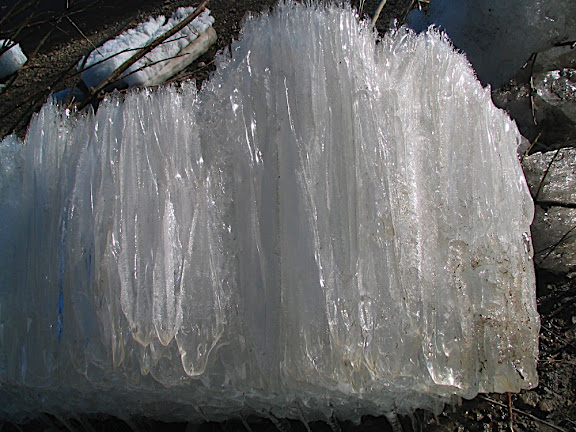 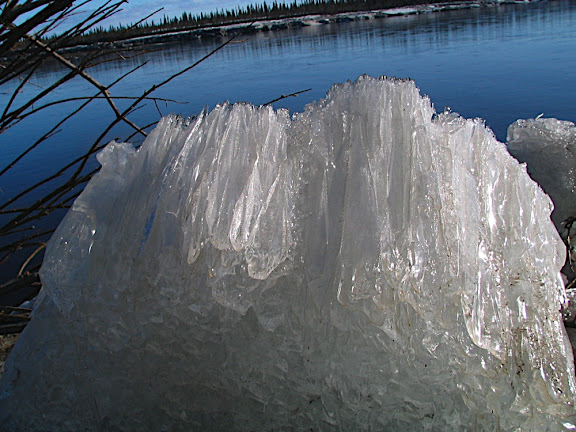 The bottom of the same piece. 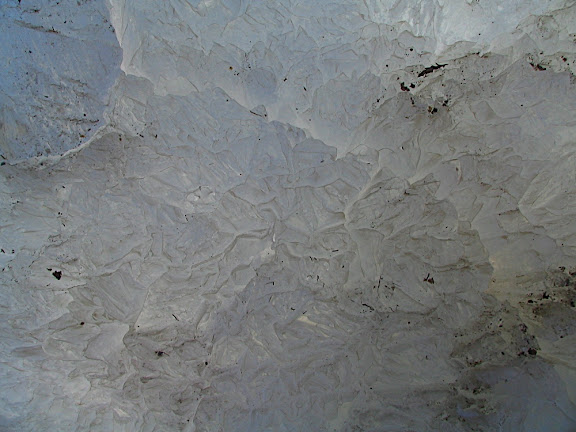 An interesting texture, forming a piece of ice art. 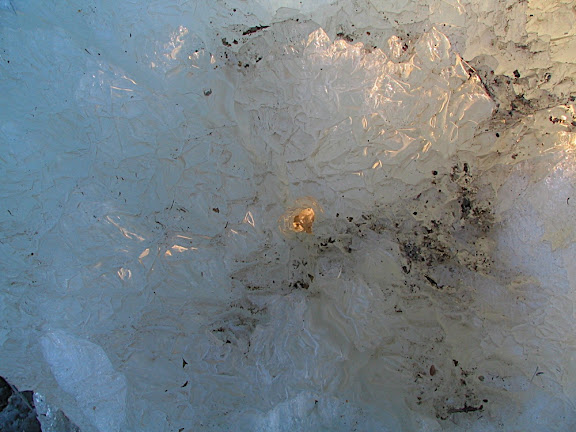 The same piece. The bright spot is a hole through the 4' chunk of ice. I'm curious to know how it got there. 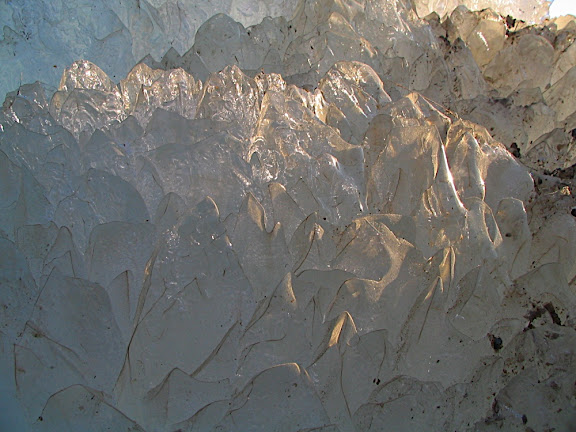 The midnight sun is casting shadows over this piece of melting ice, creating the appearance of a mini mountain range.
With the exception of next year, when the pentannual winter road will be put in, there is no road to Old Crow. The river is the highway, which means that homemade scows are ubiquitous.

This large, old boat was made several decades ago by an RCMP officer. While it is high and dry and surrounded by trees, there has been some discussion about restoring her. 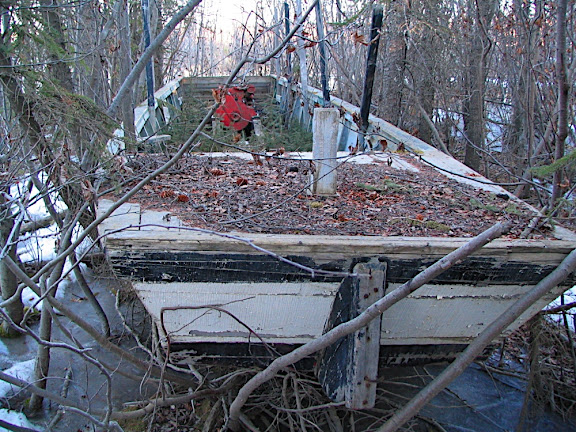 The picture really doesn't do justice to her size. She's over 6' wide and sports a tractor motor for power. 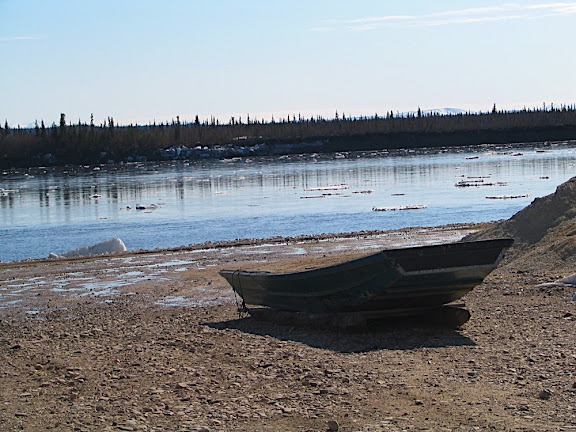 Getting ready for enough of the ice to clear out of the river. 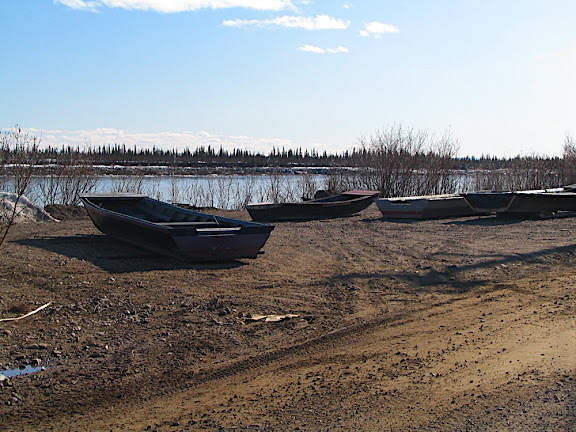 Drydock (a parking lot for boats). 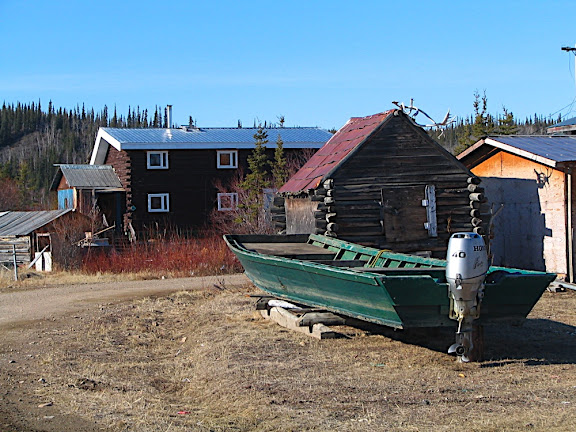 All ready to go!
A marine inspection guy from Transport Canada once looked over these scows (similar ones in a different community - not these exact boats, but I'm sure the same would apply) and declared them better built and safer for river travel than anything you can buy on the market today. 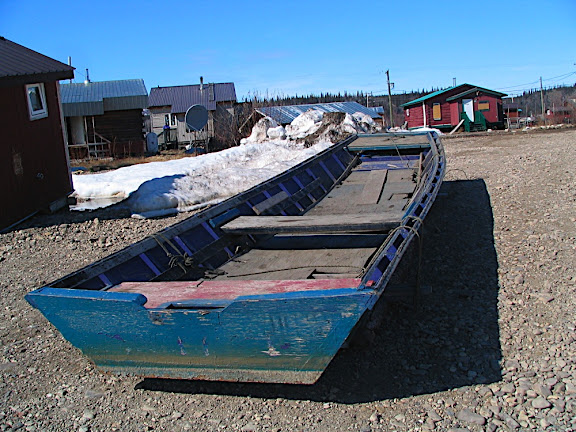 In a few days, with luck, this boat will return with a few caribou in the bow.

Tomorrow, if I'm lucky, the herd will arrive and I'll take some pictures. If not, maybe I'll be fortunate enough to return in the fall and get a chance to travel the river.

It might be the perspective, but some of those boats look huge compared to the ones in Fort Liard! Glad you got some photos of the actual community -- I was curious about what it looks like.

These pictures bring back memories... Thank you!

The photos are terrific. I particularly like the background one and have a request....could you please post it so we can all see it without all your interesting stuff hiding most of it? Thanks.
Love the profile pic too....no beard and you look particularly handsome.
Love, Mom

I'd love to see photos of the herd arriving. I have read so much about it.