My apologies for the dark and dreary whine-fest the other day. I feel a lot better now that I've spewed it out of my system (although I'm a little envious that my wife gets more sympathetic comments than me).

This morning, I got my daughter back. She was still having lots of seizures, but the times between the seizures were good, happy times. Her coordination was a little better and she wasn't staggering around like she'd knocked back a case of booze or two. I started losing her again around lunch, but I'm hopeful that a good nap will result in continued happiness and chattiness and playfulness.

Over the past few days, Jade's seizures have been manifesting themselves in sudden drops and periods of spacey-ness. She cut her lip (again) yesterday when she suddenly dropped to the floor. She wears a padded helmet now, when her seizures are bad. At first, I didn't think that we needed the helmet, but now I'm glad that we have it. She seems to like it and wears it most of the day.

Her seizures keep us on guard, which is exhausting, but we don't have much choice. This morning, she pitched forward, right into her bowl of cereal. If I hadn't been there to lift her out, she might have drowned. "Drowned in a bowl of cereal" is not a way that anyone should go. 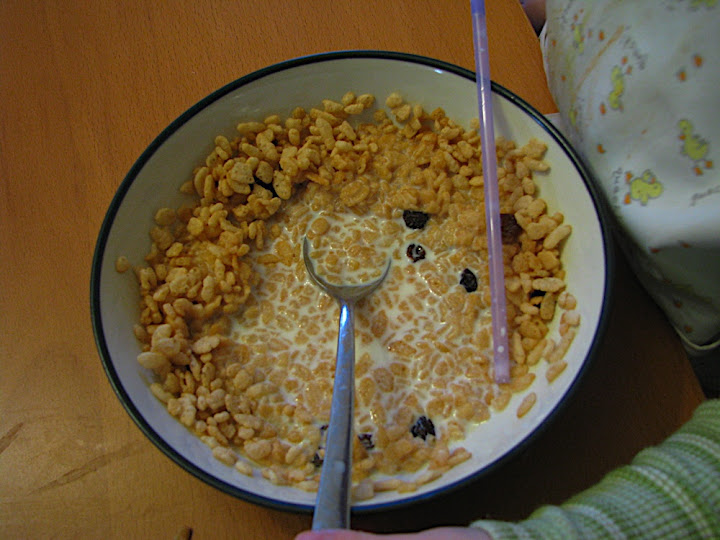 Death trap.
When I lifted her head up, there were Rice Crispies stuck all over her face. Milk dribbled out of her nostrils. She didn't cry or complain. I wiped her face and she went back to eating her breakfast. 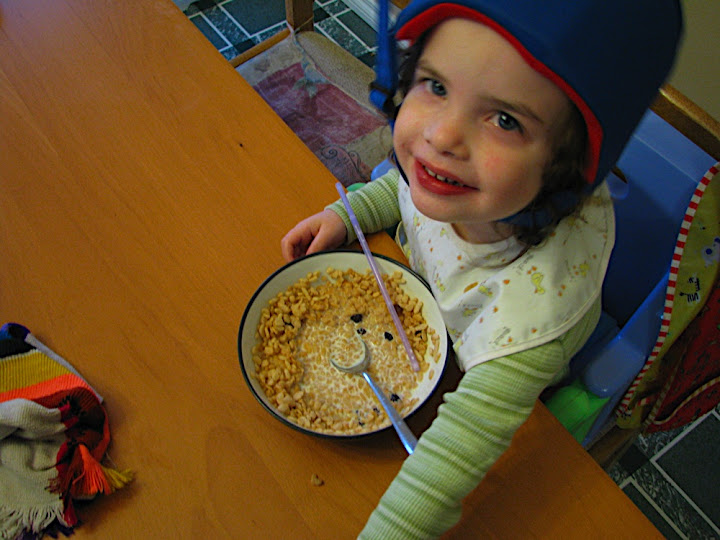 Cereal bowl survivor.
I think I'm going to stop serving her soup and cereal, but I guess it's also possible to suffocate in mashed potatoes and any number of other food items...
Who knew that food could be so dangerous?

OK, continued vigilance it is.

I tried to leave you a sympathetic comment, but I couldn't think of anything proportionate to the circumstances.

Don't worry, we're thinking about you too......and sending sympathetic thoughts! I guess it's just a "girl" thing.
Sorry. We know it's really difficult for you too and wish there were something we could do.
Love, Mom

I always knew that Snap, Crackle and Pop had a dark side to them....