"The Zucchini River" is Elias' name for the Takhini River. Although he is about the same age as Jade, he is considerably more verbose. While Jade prefers to communicate in grunts and body language and a highly efficient form of English (if it can't be said in one or two words, it isn't worth saying), Elias could probably face George W. Bush in a debate on, well, just about anything - and win. Maybe that isn't saying much, but c'mon, the kid's only two-and-a-half. Barak Obama will have to wait until Elias is at least three.

Elias's dad, Eric, called yesterday to see if I'd be interested in paddling the Takhini with him today. I was interested but we weren't able to confirm that things were a go until this morning when he proposed that we take Jade and Elias.

To be honest, the idea of taking two toddlers down the river made me a little uneasy. It's enough work keeping an eye on one active kid, but two? I don't consider the Takhini to be a difficult river, but it still requires a fair bit of concentration. And to do it without the assistance of any moms? Are we gluttons for punishment?  Masochists?  Insane? 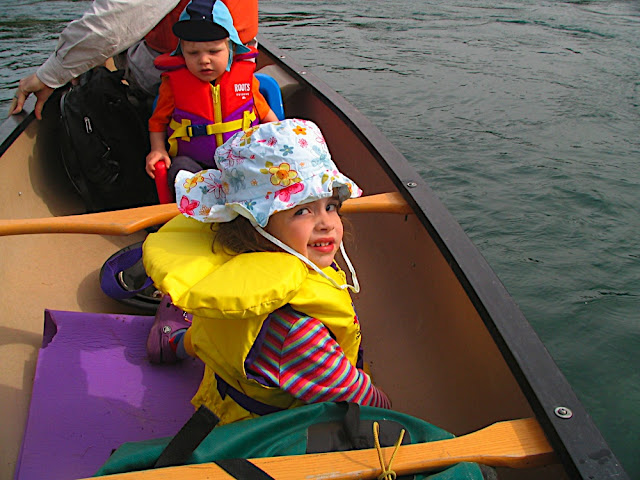 Jade looks at me as if to say, "Chill out, Papa.  You're such a dork."
The river was fairly high and fast.  The kids were great as we flew around the bends.  Elias played with Jade's fishing rod while Jade entertained herself by throwing rocks out of the canoe.
Around one bend, we were treated to the sight of an eagle catching a fish.  It was standing on the riverbank, pulling the fish apart, as we passed.  Unfortunately, I didn't get any good pictures because I was trying to make sure we didn't hit any sweepers as we went by. 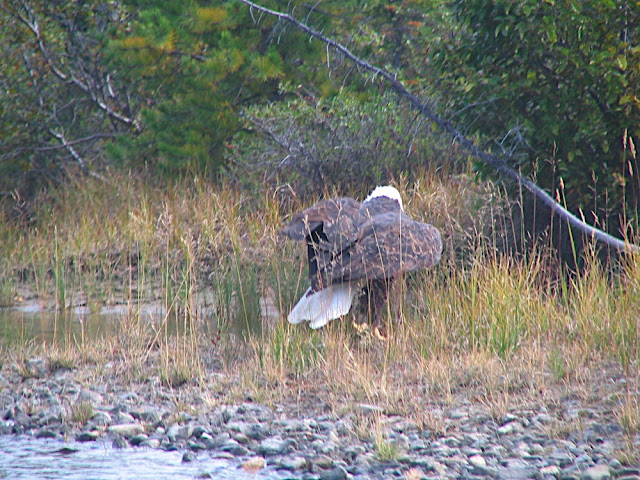 The back of the eagle as it chows down on a fresh fish lunch. 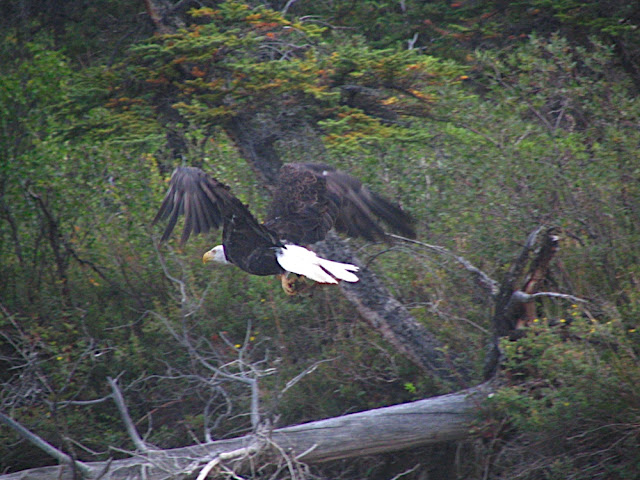 The eagle flies off with its take-out meal.
The water was clear, like it usually is, but wasn't as clear as it was last time, probably because of the high water level. The water clarity at a depth of about five feet. 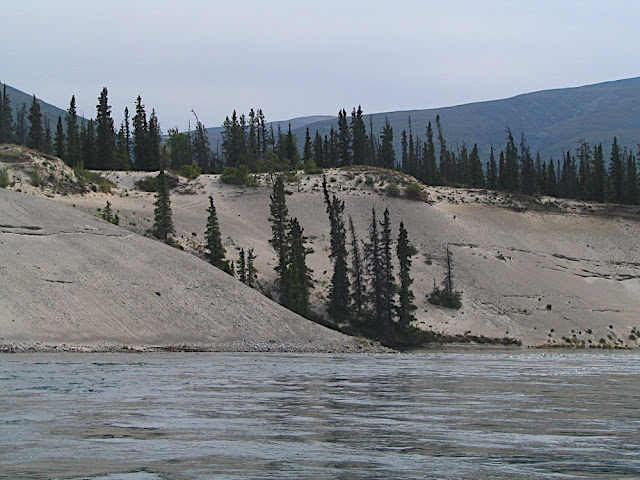 Sandy bluffs along the river.
The first time Jade was on the Takhini, when she was about six months old, she fell fast asleep in the canoe.  This time, she was almost asleep for her afternoon nap when we arrived at the "Gums of Death" rapids.  She woke up when we landed, but lay contentedly on a blanket while we hauled our gear around the portage. 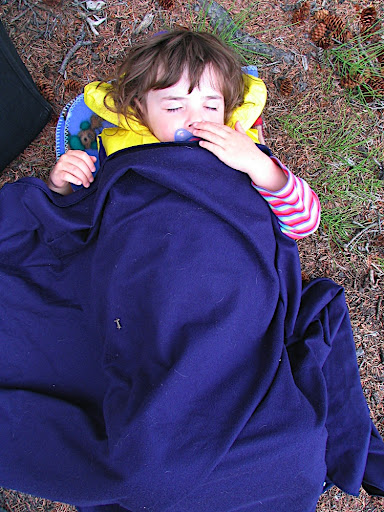 Lying contentedly.
Not too far past the portage, we pulled into a little bay that doesn't exist when the water is low.  Floating in the bay was a nice wooden canoe paddle that someone had likely lost in the rapids.  In the driftwood along the shore was a metal paddle and a paddling cushion.  We collected our booty and left the bay.
Eric put Elias down for a nap and Jade had the nap she wasn't able to get to before.  Now, with the river a little wider and slower, and with both kids asleep, my hands were free to take some pictures.
We paddled into a little snye that doesn't exist when the water is low.  It was peaceful.  It was quiet.  A small duck (a species I didn't recognise) flapped by and little birds flipped about.  We paddled up to the end, where fallen trees blocked further progress, and turned around. 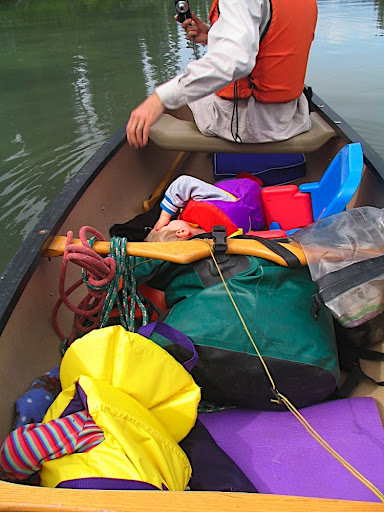 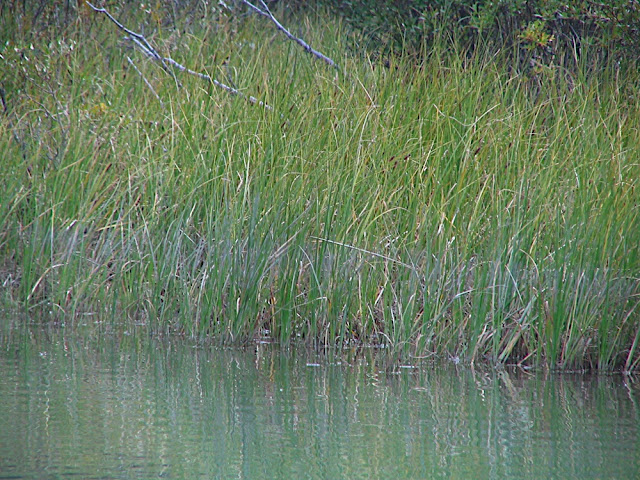 Grass in the snye.  Judging by the line, the water level was a fair bit higher. 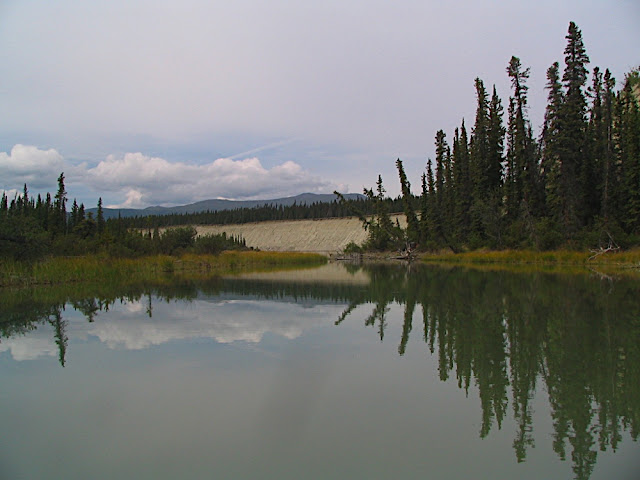 Reflections in the snye.
Back on the Takhini, we drifted with the current, sitting back to enjoy the warmth of the sun and the coolness of the river. A fly buzzed by - the only insect I'd seen on the whole trip. We could hear the gentle lapping of water on the shore and the deep breathing of our sleeping kids.
Eric said it best when he whispered, "This is the life." I couldn't have agreed more. 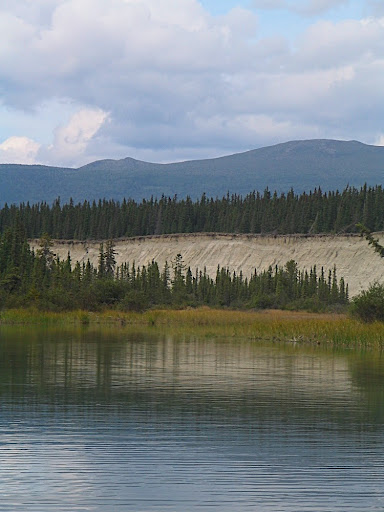 Drifting down the Takhini. 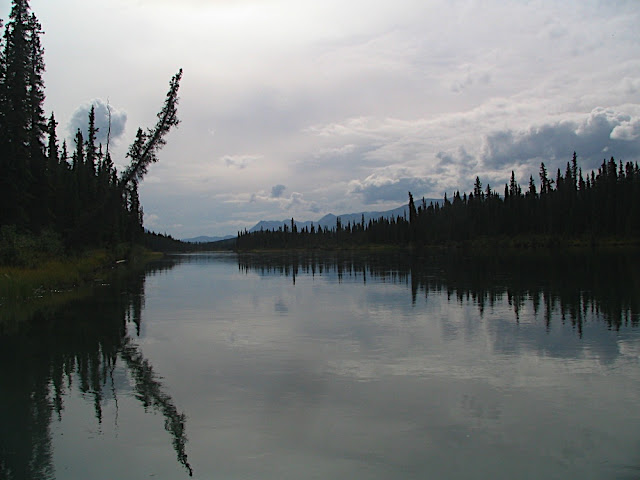 Reflections on the Takhini. 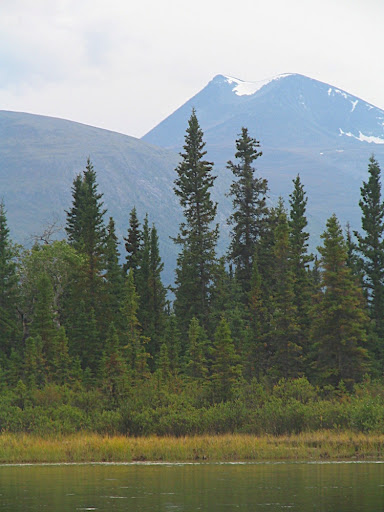 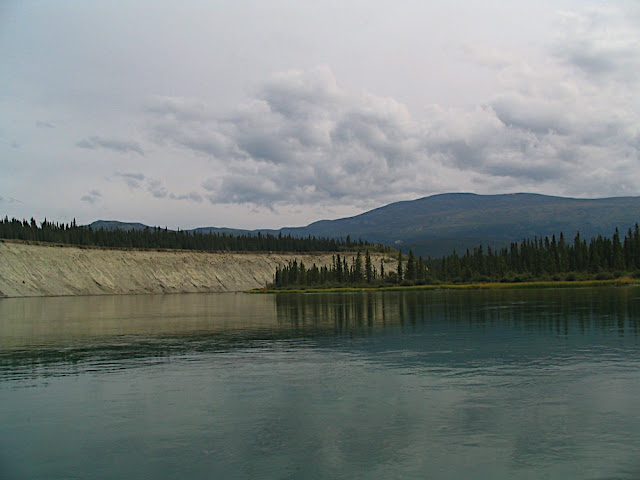 Bluffs along the Takhini. 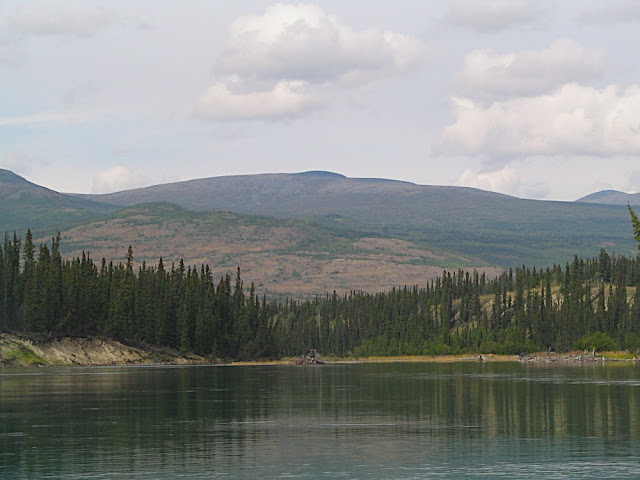 Near the pullout.
Eric spotted another paddle on the shore, which we collected without disturbing the napping kids. Before long, we were at the pullout. I think it was the fastest trip I've ever taken on that section of river.

At the pullout, I unchained my bike from the tree where I had stashed it and rode back to the Takhini River Campground to get the car, leaving Eric with the still-napping kids. Overall, the trip had gone smoothly and was not the chaotic attempt-to-manage-a-couple-of-squirming-beasts-while-trying-to-paddle-down-the-river-safely trip I had imagined.

That'll probably be next time.

I love the picture of Jade at the portage! Also the one of the two kids sleeping in the canoe, both with their arms up to their faces - so sweet.

The one that made me laugh out loud, though, was the one you captioned "Drifting down the Takhini River", which I imagine must've been pretty wild, upside-down...! ;)

Fawn beet me to the comment. I looks like you were drifting upside down the Takhini River.

>sigh< Originally, I put the picture upside down because it looked more interesting that way. Then, I thought better of it and flipped it right-side up (updating the url for the image and everything). For some reason, the change didn't take on anyone's computer but mine, so I hope you're enjoying an upside-down view of the Takhini.

I love the photos of the kids. So sweet.