I hated the smog when I lived in Ottawa.  It was disgusting to drive into the city and see a layer of hazy brownish, greenish air-sludge settled over top of everything like a heavy blanket.  I decided that I didn't want to put that crud into my lungs anymore and that meant it was time to leave the city.  I started thinking about places where the air was clean and concluded that north was the way to go1.
I was sleepy for a week after I moved to Fort Liard.  I thought it might have just been the long drive, but I noticed the same thing happened to people who came to visit me from smoggy places.  They all remarked on the quality of the air.  Our bodies weren't used to breathing the clean, oxygen-rich air and our now over-oxygenated bodies were intoxicated from the fresh air. When I travelled south and stepped off the plane in just about any city, I couldn't help but notice the thickness and foul smell of the air.
And then I moved to Whitehorse: the ultimate compromise for those who need to live in a city and still want to have all of the goodness of northern living. And the air is good.
Sometimes.
This time of year, when I stick my head out of the door in the morning, I gag.  Nearly four kilometers away as the raven flies is an asphalt plant.  The plant belches big billowy plumes of asphalt smoke that drift with the prevailing winds, down the valley, right to my neighbourhood. 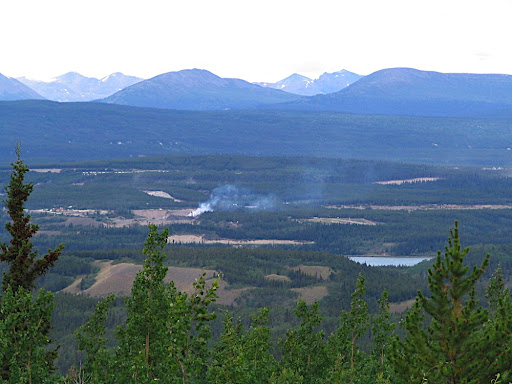 Belching asphalt smoke that drifts down the valley.
It reeks.
It smells worse than Ottawa ever did.
Sometimes it's almost impossible to bike down Robert Service Drive (near the asphalt plant), just because of the low-lying, choking haze.  That's bad enough, but to smell that bad almost four kilometers away?  There's really no excuse.
So much for living in the north for its air quality.
Does anyone else out there have a problem with the emissions from this hydrocarbon fart facility?
1This was only one of the reasons I decided to move north, but it was a big consideration for me.  I'll post a more detailed story in response to yukonchatterbug's posting on "Moving to the Yukon" another day .

Yep, we have the building here at work regularly tested because some of the staff claim they can smell it and that it really bothers them. I don't really notice it that much, but maybe I'm used to it!

So they just keep testing the air quality in the building, but nothing is ever done to limit the emissions, right?

I find it incredible that every time this subject gets a lot of press, someone from Skookum will state that they've had the air tested and it's mostly steam, with no smell!!! There are days when it's worthwhile making a lengthy detour to avoid the area. The day will surely come when they have to move the plant (but to where??).

I was in the Tour de Whitehorse this past weekend and Friday night consisted of a hill climb sprint up Robert Service Way, right through the horrible Skookum stank. I swear I could have saved minutes if the fumes didn't fill up my lungs with goop...minutes I tell ya!