The Cantlie Lake Triathlon - Sponsored by Our Wives

I've wanted to find the geocache hidden at Cantlie Lake for a while. I was in the vicinity last year when our team was training for the 2007 Yukon Adventure Challenge, but we didn't have the time to go looking for it then.
After doing a little bit of geocaching with Dennis one evening, we talked about biking in to Cantlie Lake to find the cache and to do a little bit of fishing. Dennis really likes fishing.  He said, "Let me check with my wife," as did I.
I gave Eric a call and asked if he was interested in joining us and taking his new bike for a spin.  He said, "Let me check with my wife."
Now, for anyone who isn't a caring husband with kids, the expression "Let me check with my wife" can be misinterpreted as "I am whipped."  That's not the case.  The expression means, "I might be previously committed to something that I'm not aware of," or "If my wife is too tired, she might need a break more than me."  These are things to which conscientious husbands like ourselves try to pay attention.  We're not always successful, but we try.
When you have kids, it's not always easy to ask for a day off. Even just a little bit of personal time is not free and clear; it comes with the guilt of knowing that, while you're celebrating your freedom, your parenting partner is being run ragged with the kids. Still, we needed to get some fresh air and exercise and to indulge in our respective hobbies.
We were going for a strange kind of triathlon: biking, fishing, geocaching. Would we achieve our goals?  Would we even get to go?
We applied for permission permits from our respective spousal regulatory agencies and were all granted approval. The trip was a go!
After a bit of coordination and research, we met on Sunday morning and tackled some singletrack before connecting with the Cantlie Lake road/trail.
The trail into Cantlie Lake is nice because there's a little bit of everything. A few puddles, a bit of up, and bit of down, a lot of up, a lot of down, packed trail, big loose rocks, sand, mud, roots, and stumps - all of which are presented in bite-sized servings.
After a bit of downhill, we pulled off the main trail to take a break and enjoy the view. The trail wraps around the south end of Canyon (Grey) Mountain and provides great views of Golden Horn, Mount Lorne, the valley to Carcross, and the Yukon River. 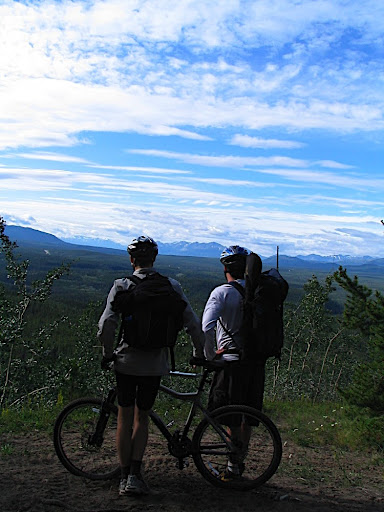 Eric and Dennis take a brief break to enjoy the view on the ride in.
During the break, I took a quick side-trip to investigate a trail. The poplars along the south-facing slope were bent and twisted. There were moose and sheep tracks all over the sandy pathway. I was tempted to follow the trail even further, but we had a lake to get to. 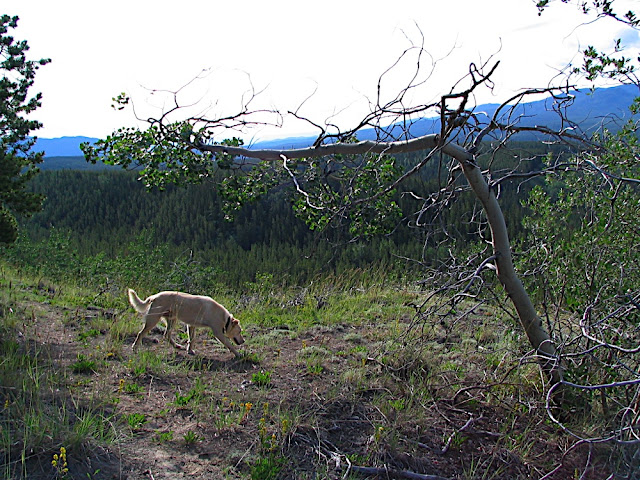 A hangin' tree.
There were a few ATVs on the trail. Why is it that you almost never see bike riders wearing camouflage clothing, while ATV riders wear it like it's the ATV rider signature clothing style? Do they think they're sneaking up on anything or anyone with the noisy put-put-put of their machines giving them away?

Before we left, Dennis had heard through the "fishing line" that there was a canoe at the lake that a kind and thoughtful person had brought in for people to use as long as they took care of it. For that reason, we were riding in with life jackets. I had a collapsable kayak paddle strapped to my bike, the blades of which stuck out the back end of my bike like flames. As we rode down to the lake, we saw half of a boat propped up between some trees. It was an old fiberglass-hulled vessel, cut straight across the beam.
"Could this be the boat they were talking about?" we asked. Eric commented that the half-a-boat might get us about halfway to our destination.
After a little more exploration along the beach, we found the canoe that they were talking about. 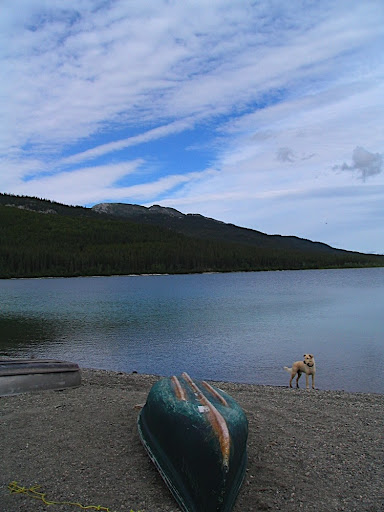 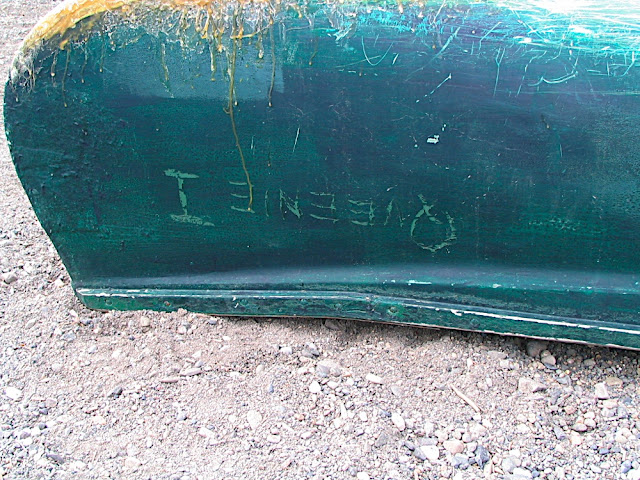 The Queenie I: A grand ol' vessel.
The flat-backed canoe was christened the Queenie I. I didn't think that numbers got added to boats until the second came along (Queenie, Queenie II, Queenie III, etc.), but it doesn't really matter. I appreciated that someone was kind enough to haul a boat out there for others to use. From the looks of the hull, it has seen some heavy use over the years.
We made a fire and cooked some bannock on a stick. Dennis, in his eagerness to fish, had only one stick of bannock before heading out on the lake. The temperature was pleasant and the wind was calm. It was a good time to be on the water. 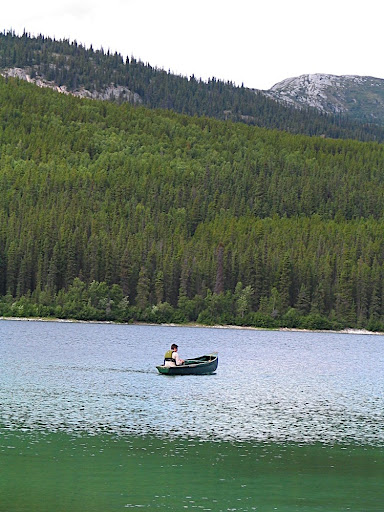 Dennis starts fishing.
After we finished our bannock, we joined Dennis in the canoe. The wind started picking up. Eric and I paddled toward the geocache while Dennis trolled for char. 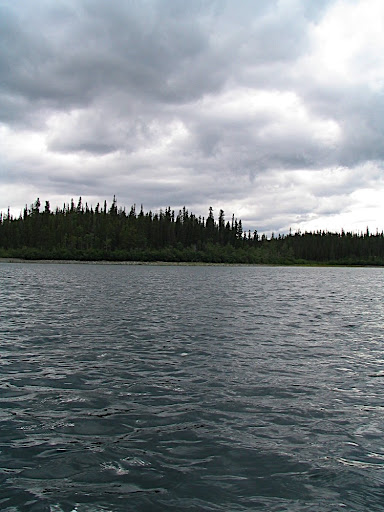 The wind and clouds move in. 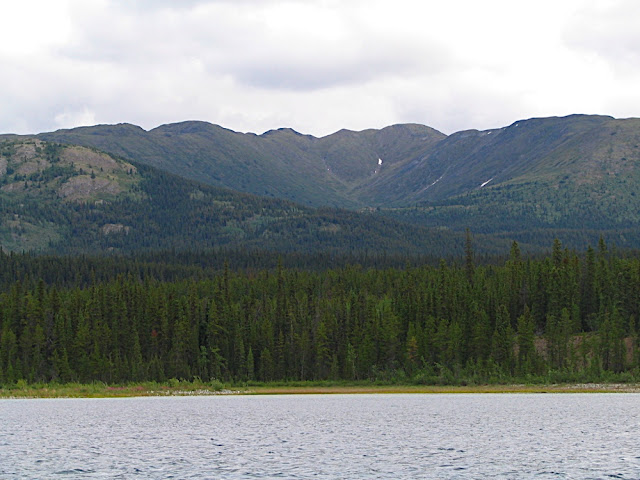 Somewhere to go hiking.
After a quick search, we found the geocache. In terms of loot, it's one of the best caches I've ever seen. 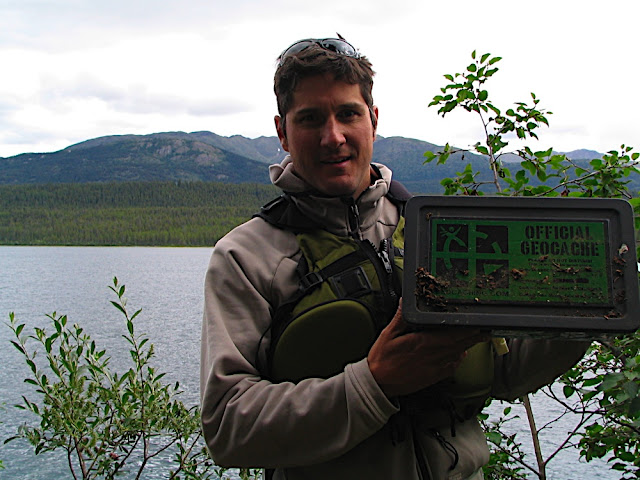 Dennis and the geocache.
There was a rock wall on the shore near the cache. I don't know who built it, when they built it, or why, but it made a great windbreak while Dennis took a few casts from shore. 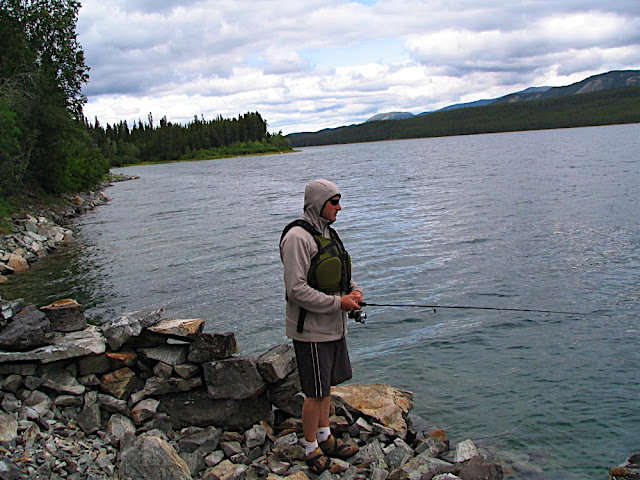 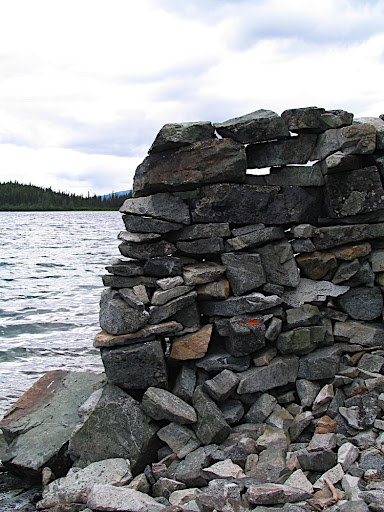 The wall of rock.
While Dennis was fishing, an eagle flew along the shore and perched in a spruce tree, watching us from on high. Later, a juvenile flew in and perched on another tree. As we paddled around the lake, they followed us, flying from tree-top to tree-top and sometimes giving us displays of arial acrobatics - especially when a gull came to harass them. 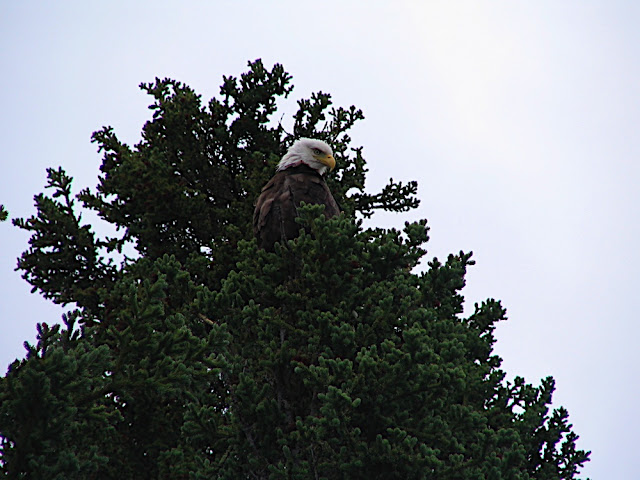 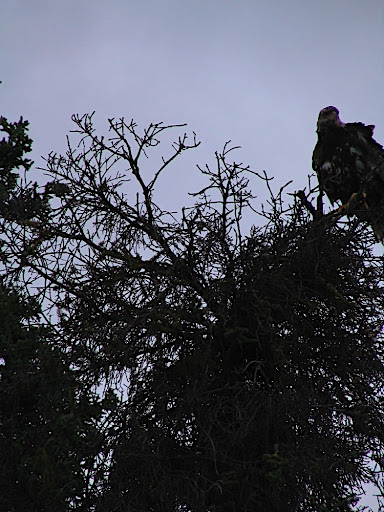 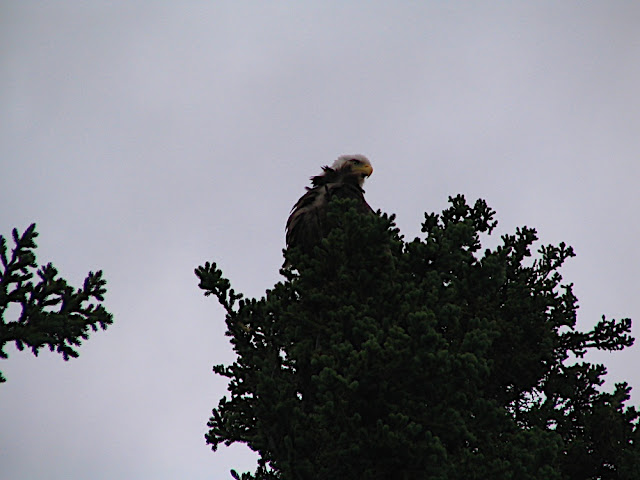 The eagle stands on guard. 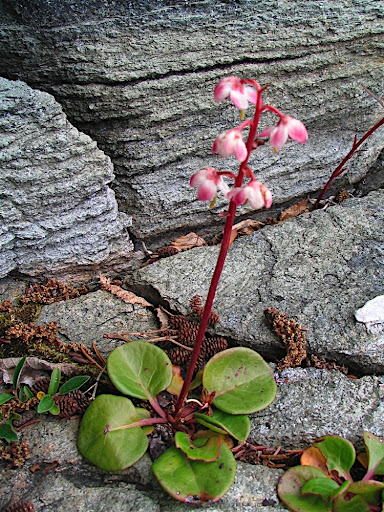 A pretty plant on the shore. I don't know what it's called. Any experts out there?
The fish were not big, but the fishing was good. Before long, Dennis caught four char and a bungee cord that someone had lost in the lake. 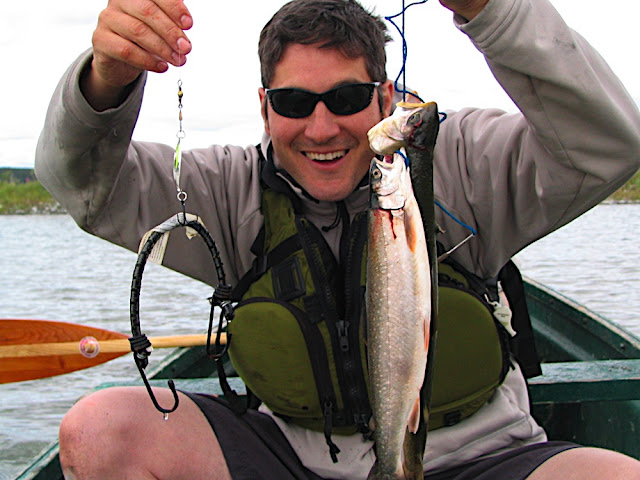 Dennis displays his catch: char and a bungee fish. 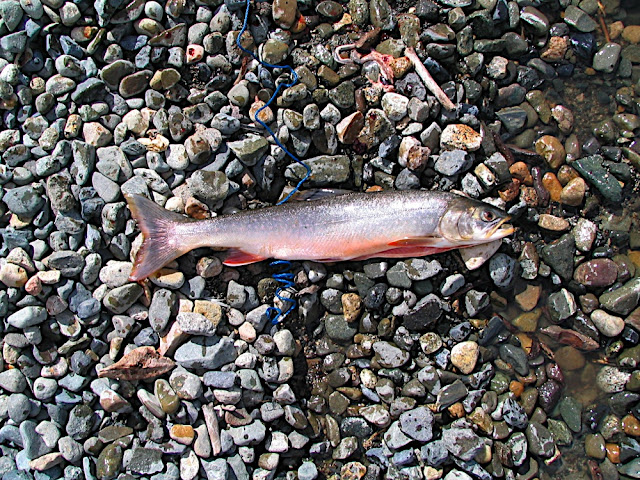 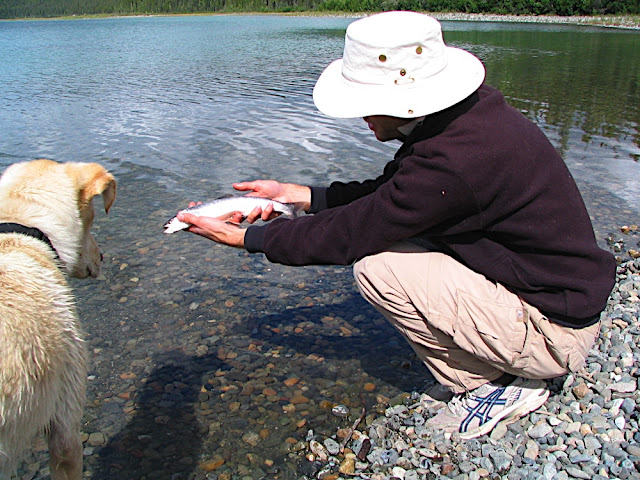 Eric examines the shining char in the sunlight.
The sky began to clear and we figured it was time to ride back. We were happy that we had accomplished our geocaching, fishing and biking objectives. As much as we all love our families, sometimes we all need a bit of time away to do the things that we love and we're grateful to have wives who understand that. 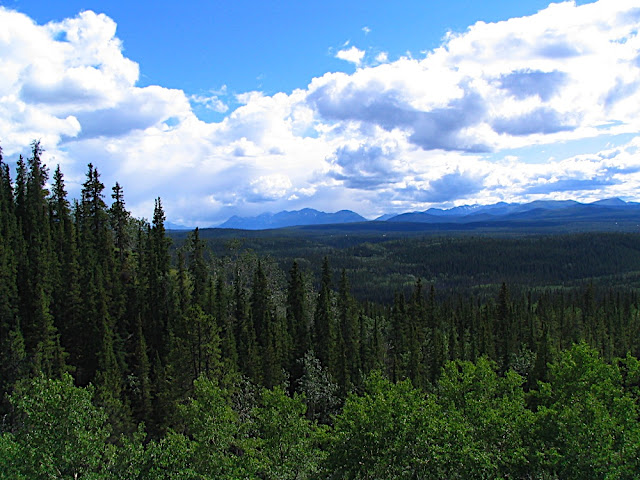 I got some friends to look at it and they believe your mystery plant is in the wintergreen family Pyrolaceae, possibly Pyrola minor

Awesome! After looking at the leaves and the flowers, I think it might be pyrola asarifolia - but I didn't find it in a bog...

Thanks for putting me on the right track!