Hallowe'en is my favourite holiday. I'm not sure why, but I absolutely love it. It might have something to do with the creativity of costumed people or the sheer joy of the kids running from door-to-door collecting pillow cases full of candy. Maybe I like it because it gives me carte blanche to scare people - something that I do every year.

Before it got too late, we took Jade out for a bit of trick-or-treating. Jade and I dressed up as trappers and Fawn was dressed up as a zipper. We went around to visit with a few neighbours before heading home and having dinner with our friend, Cathy.

Shortly after dinner I shaved my beard and donned my traditional Hallowe'en costume and got set to scare.

Only there were hardly any kids! There were even fewer than last year!

I got some good screams out of the kids at my neighbour's place. It took a little while for them to react since they were all stoned, which was disappointing, but once I got them going the going was good.

I also went to a few friends' places to scare them. Most of them didn't scare, but a couple did.

It got me to wondering about "screamers". What possible evolutionary advantage could there be to have someone's first reaction to a fright be a scream? Sure, it warns all the non-screamers of the danger, but doesn't it make the screamer even more of a target? Or do the screamers survive because non-screamers come to their rescue? I wonder if there has ever been any research on this...? 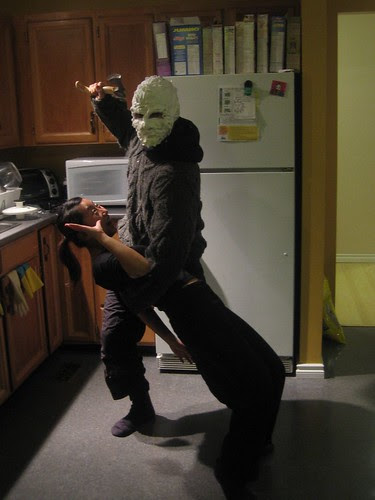 Charmaine gets an introduction to Hallowe'en.
Well, as quiet as it was here, I hope you had a happy, hoppin' Hallowe'en.

I knew you had disappeared for a while because you weren't under the stairs when Cathy left to go home. I wondered if you'd gone to Norris and Charmaine's but forgot to ask you when you got home. That's such a cute pic!

Actually, in the "self defence for women" classes I've taken, a scream is said to be a good thing, the idea being that it will scare your attacker with the noise. Mind you, they suggest trying to make your voice as bass as possible so they are scared by the fact that such a big voice can come from such a "little" girl...

In the screams sub-category, I find there to be a big difference between a shriek and a yell.

A shriek is submissive and full of fear. It suggests a lack of control over the given situation.

A yell is dominant and forceful (which is probably why they suggest trying to make your voice as bass as possible). It suggests control and authority over the given situation.

I find that most Hallowe'en screams are shrieks.

Not that I'm really an expert. I wonder if there are screamologists?