A drive down the Annie Lake Road

I had the exploration bug this afternoon so I headed out with Nanuq to look for a few geocaches. I turned onto the Annie Lake Road, but drove right by the cache that I was looking for. Turning off my GPS, I drove up the road, into the mountains, beyond Annie Lake and into the Wheaton River Valley. 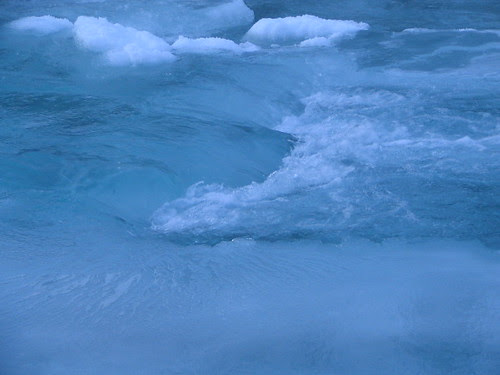 Ice in the Wheaton River.

The road was in good shape and the scenery was great. I could have kept driving, but that wouldn't have been fair to Nanuq, who was eager for a walk. Before one of several small wooden bridges, we stopped and started walking up a mining road.

The air was crisp, but at -20oC, it's the kind of cold that'll feel warm after we've had a bit of colder weather. 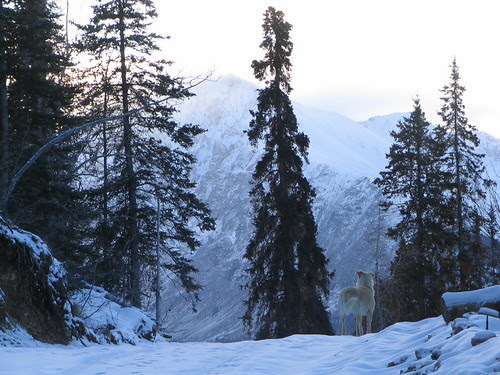 Nanuq scouts out the road ahead.
We climbed quickly and left the mining road at one point to head straight up the mountain. With only a thin layer of snow, the going was easy. There were fresh hare tracks everywhere. I was eager to continue going straight up the mountain, but something got Nanuq's attention. His hackles were up and he was pointing at an unusual "cave" made by some tree roots overhanging a small ridge. It looked like it might be a bear den so, not wanting to push our luck or wake a grumpy bear, we headed back down the slope. 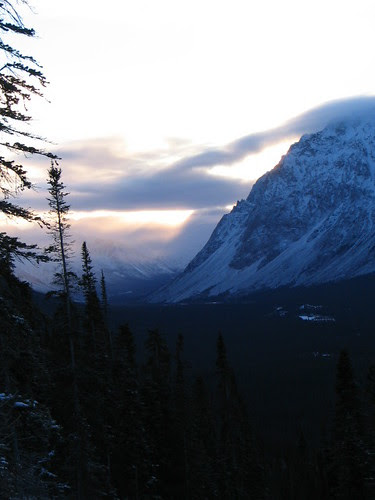 Sunset up the Wheaton River. 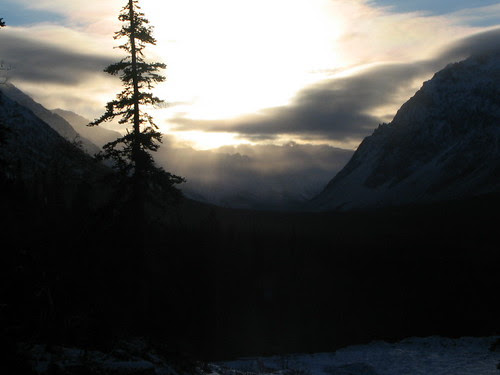 Looking up the Wheaton River Valley. 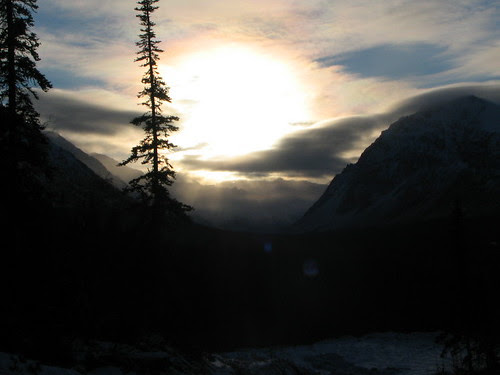 A dramatic sky.
The main road took us to an abandoned mine, which we promptly left to follow the small cat trails that switchbacked up the mountian. As we climbed, the views just kept getting better and better. 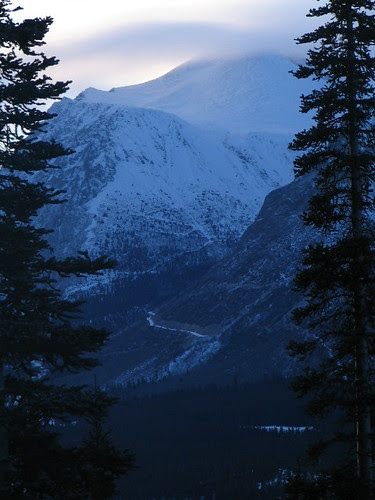 Looking towards Whitehorse, I could see a bit of smoke in the valley and a large building that looked like it had something to do with a mine. Judging by the names on the maps, I wouldn't be surprised if it's a gold mine.

A small segment of the Wheaton River Valley.
We got to the end of the cat trail. Nanuq walked off the end of the trail and I was tempted to also, but the sun was setting and I still had to get back and buy some groceries. Reluctantly, I turned back down the trail, resigned to make it to the top another day. 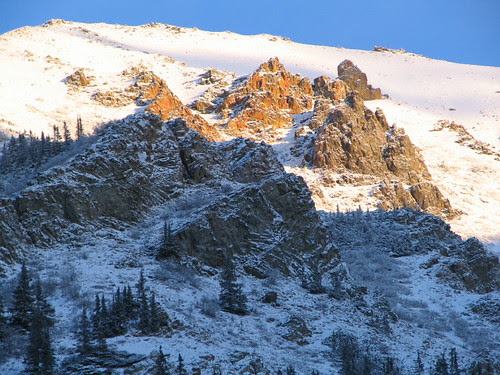 I've noticed a few times that I've misnamed the places I've been. For example, when I went to find the Scout Lake geocache, I thought the cache was placed overlooking Scout Lake. It's not. I had passed Scout Lake on my way in, much further northwards. The lake that I sat around beside while eating a snack doesn't seem to be big enough to have a name, according to the government's online atlas. I hereby name it "Small Lake Near the Naked Guy's Cabin". It's a long name, I know, but it should an easy one to rember.

As I hurried back down Annie Lake Road, I stopped to take one more picture. I couldn't help it. The moon was bright yellow and the Man-in-the-Moon smiled happily over Mount Lorne. I figured, "It's not every evening that you get to take a picture of a moonrise like this." Of course, it didn't capture the crispness and detail in the moon - I have got to learn how to use my camera properly. 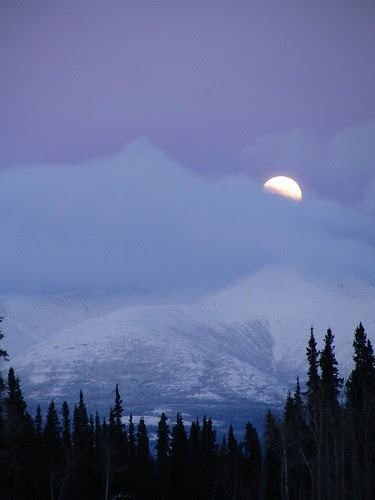 Wow! That is an amazing photo of the moon, sky and trees. Nice.

Well if you had to abandon me on my "day off", at least you got some good pictures out of it... ;)

But watch out NEXT Sunday...

Awesome photos Mike - all they need are frames and some inspirational sayings :)