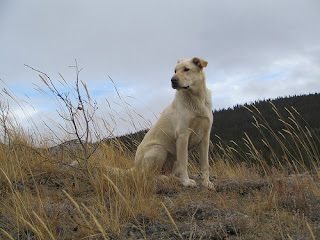 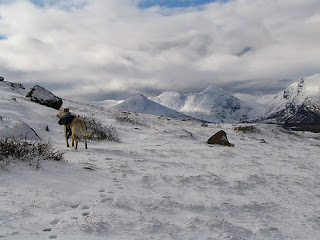 So sad. Even though I knew Nanuq only from occasional visits, he was a great buddy to fight with for a stick and to accompany us for wintertime walks over snowy trails. Not to mention passers-by at Starbucks being delighted by his friendly presence tied to the street lamp in front of the store. Farewell, Nanuq. We'll miss you.

This is so familiar to me Michael - when dogs like Nanuq go, a hole is left... a big hole, for a very long time... a new fluffy puppy is always wonderful but they are too new and small to fill such important tracks...

The good thing is our children learn amazing lessons like unconditional love, the cycle of life,
Compassion towards others & so many more important things...

You've done well by each other and your last kindness to your old friend is letting go...

Sending love and gentleness to you, the family and, of course, to Nanuq...!!

My heart is breaking for you and your girls.

Now Nanuq and Luna get to have adventures together again. Such good dogs. So missed. So loved.