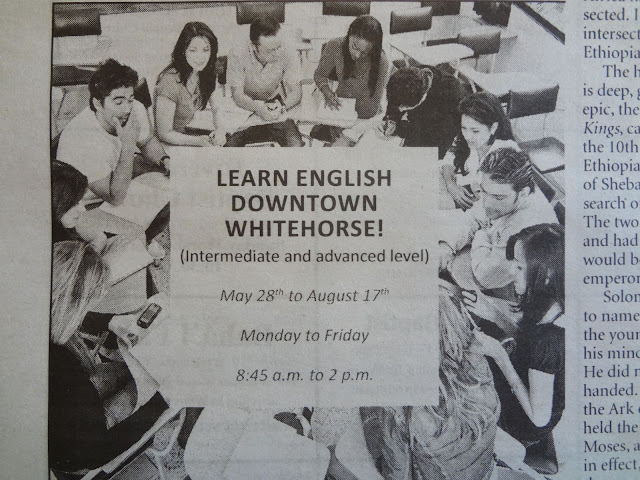 When I first saw this newspaper ad, I recoiled in a mix of amusement and disappointment. Is downtown Whitehorse  being ordered to learn English? Or is the ad missing the word "in" between "Learn English" and "Downtown Whitehorse"? How could someone purporting to teach English fail so painfully in their grammar?

And then I thought about my reaction.

This ad belongs to a non-English organization.  I am unilingual.  I am not proud of this, and am making steps, however painfully slow, toward learning a second language.

So far I have learned this: A desire for perfection can be both an excellent motivator and a terrible deterrent when learning a second language.  For me the desire for perfection has been more of a deterrent.  If I'm not sure that I'm saying something properly in another language, I won't say it at all.  I have come to realize that that is not a good way to learn.

If language is an art, then perhaps it is best to be able to make a rough sketch before adding the details and refining them. Before I can speak the Mona Lisa, I must first learn how to communicate the general idea - no matter how rudimentary - and learn how to add the poetic nuance later.


So, I can grant the same courtesy to an organization where English isn't the first language - especially one that is giving others a chance to develop their own English language skills.

However,  I won't go easy on the newspaper ad people who likely designed this ad.

They should know better.

Funny that, how different we all are. Those who learn how to swim before jumping in. Those who jump in and paddle like hell. Need a bit of both to survive in life.

Best French class I ever took. Went to all the art museums in Montreal and talked about our feelings about what we saw. Worked for me: but then I jump in and paddle like hell. Sometimes it is a very tiring paddle. Sometimes I am very grateful for people who are not like me and test the water first. Seems like I have never really learned to do that! Thanks Michael for a fun meandering. Arlin

Normally, I'm a "get my hands dirty and figure it out" kind of guy. I was surprised to realize that I was approaching learning another language so differently.

I think that's pretty common for learning a foreign language, for whatever reason. Even though the government considers my French perfectly adequate, I still hesitate when I'm in a situation where I need to speak it. I have to tell myself the same thing you tell yourself: they don't expect perfection, and appreciate the effort. Most of them, anyway. ;)