After my week in Beaver Creek, I took the opportunity to drive to Anchorage. I wanted to get some repairs done on my vehicle and it was more cost-effective to travel to Anchorage (since I was halfway there anyway) to do the repairs than it was to do them in Whitehorse or Edmonton.

What struck me about Alaska is how much more populated it is than the Yukon (by a factor of 20). Also, it has a big pipeline. 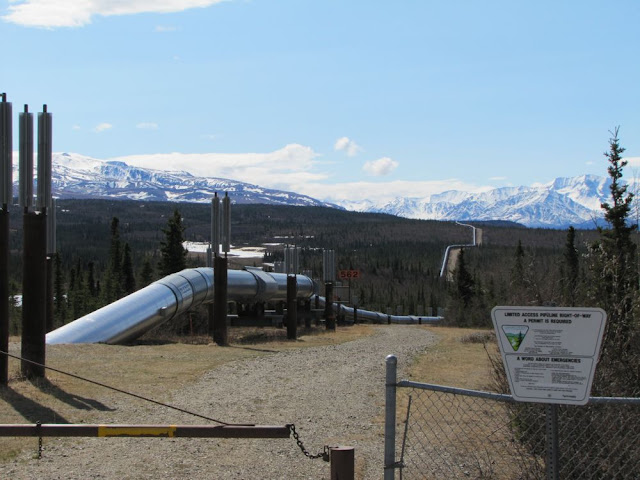 The Trans-Alaska Pipeline is one of the world's largest pipeline systems. It is the economic aorta of the state and, apparently, attracts tens of thousands of tourists on pipeline tourism trips every year. Go figure.

Before the trip: "But I don't wanna go to Disneyland! I wanna go see a big pipeline!"
After the trip: "Yup. It's a big pipeline, alright. What did I do when I got there? Well, I just stood there and looked at it. Most rewarding experience of my life, I reckon. Waited my whole life to see it. Yup. Hope to go back and just stand there and look at it some more, someday."

The pipeline is mostly above-ground because of the difficulties that arise from burying a pipeline in permafrost. Of course, having it above ground means that the pipeline becomes somewhat of an impediment to wildlife - and has also become a target for
"sharp" shooters who like to fire their guns at 800-mile-long targets. They've installed nifty temperature moderators for dealing with the permafrost in selected sections of the pipeline (like here, where the pipeline goes underground just long enough to allow for a road crossing), and the pipeline is reportedly resistant to most types of bullets, but I'm not aware of anything that has been effective for preventing drunken target practice sessions. 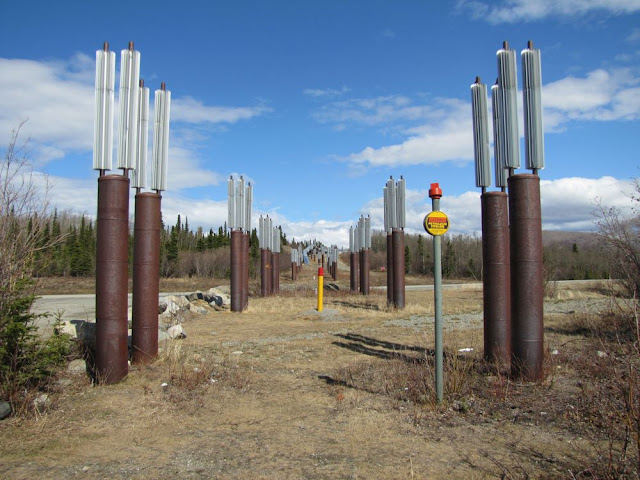 What surprised me most about the pipeline (other than how much it dominates the landscape - even though there are massive snow-capped mountains nearby where I saw it) was how noisy it was! I had no idea.

What will the future of the Trans-Alaska Pipeline be? I don't know, but it will run out of oil eventually - and with tens of thousands of tourists traveling to see it every year, I think there might be some potential for high-speed passenger transportation capsules (mail tube-style). I'd totally pay to experience that - assuming they find a way to stop the idiots from using the pipeline for target practice.

Email ThisBlogThis!Share to TwitterShare to FacebookShare to Pinterest
Topics: Alaska