Getting the in-laws out of the house...

OK, so that title sounds worse than it really is.

My in-laws are here for the holidays and everyone is experiencing a bit of cabin fever. To help alleviate the symptoms, a road trip was prescribed. My in-laws and I hopped into the car for a drive down to balmy Skagway, Alaska.

It was -28oC (-18F) when we started off in the morning darkness and stayed that way for most of the trip. We stopped frequently for pictures as the sun rose, though we never actually saw the sun because of the ever-present clouds. 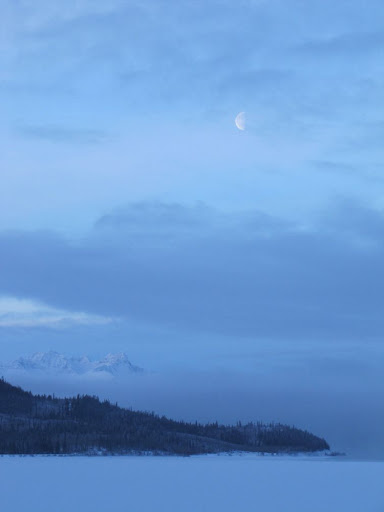 The new greeter at the entrance to historic downtown Carcross. Go on and lick it. I double dare ya! I triple dog dare ya!!! 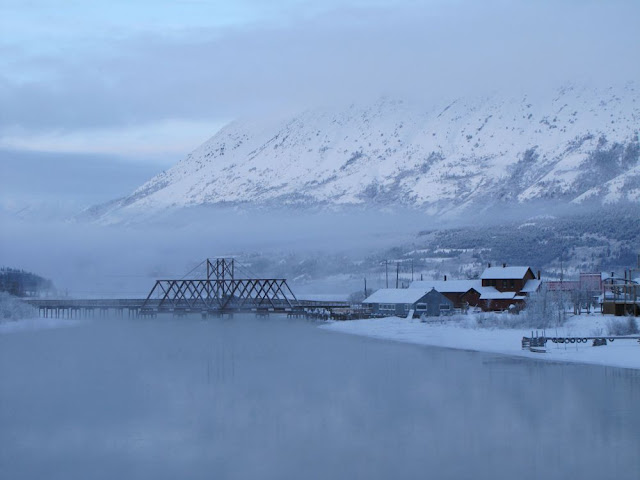 Downtown Carcross and the train bridge over the Nares River.
The road wasn't in the greatest shape, but it wasn't awful, either. With a somewhat reduced speed, it was still very driveable. Slowing down also meant that I was less likely to plow into the thousands of little birds that were nibbling sand and gravel off the highway, or the moose that was hanging out on the road just over a rise. 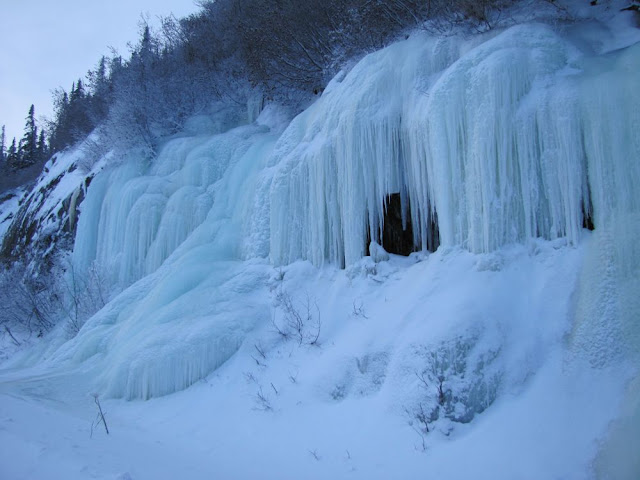 Just one of the many hundreds of ice falls along the way. 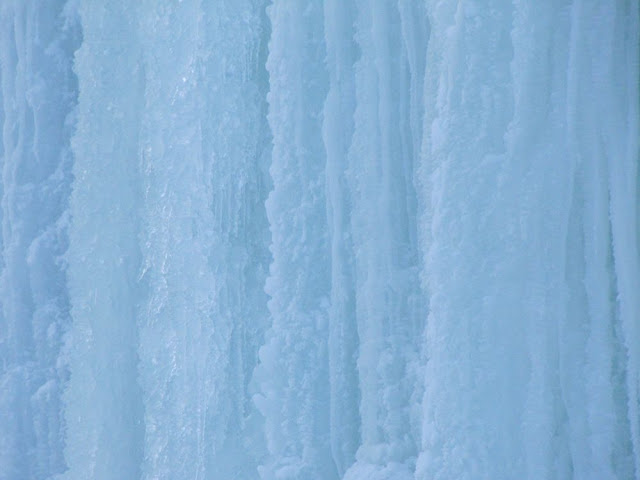 Icy goodness.
It always surprises me how quickly the drive passes. It's only a couple of hours, but it seems so much faster. 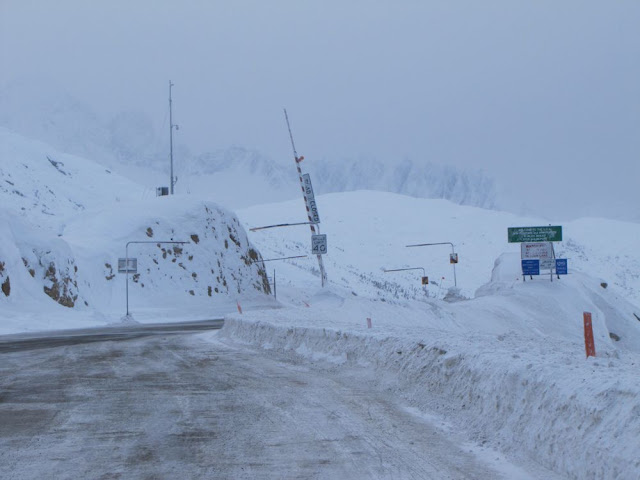 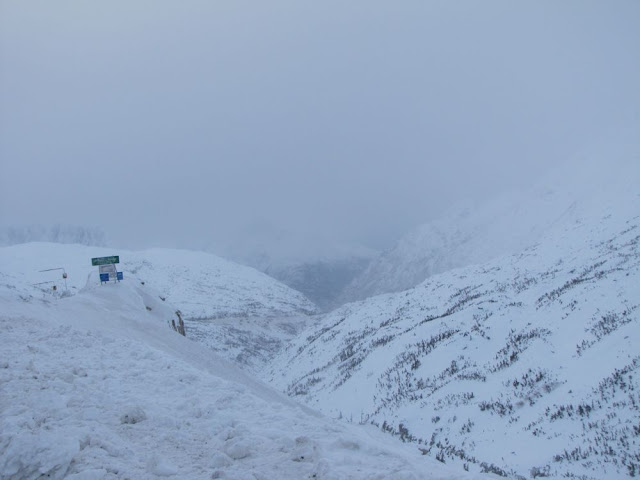 During our descent toward the salty water of the Lynn Canal, we watched the readings on the car's thermometer leap upwards to -4oC (25F). Oh, yeah, we thought, it's going to be so nice and warm! 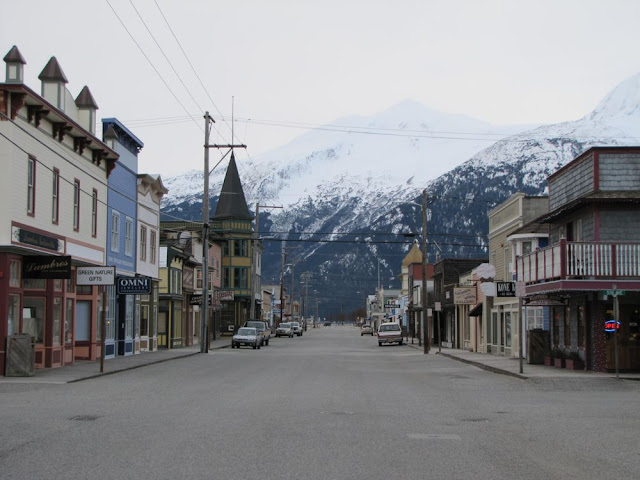 We were so very wrong about the temperature. The dampness and wind shooting down into the valley from the north made it feel even colder than it did in Whitehorse. It made wandering around downtown fairly uncomfortable, so most of our exploring was done from the warmth of the car. 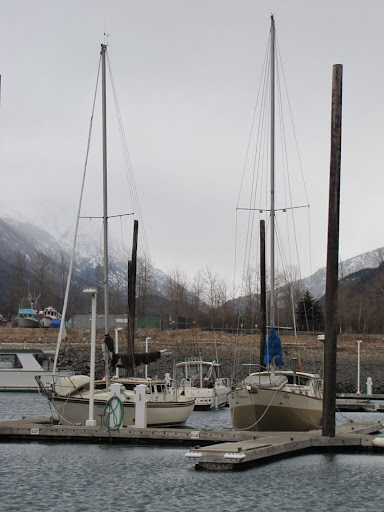 The small boat harbour, where some diehard boaters (or live-ins) were working on their vessels. 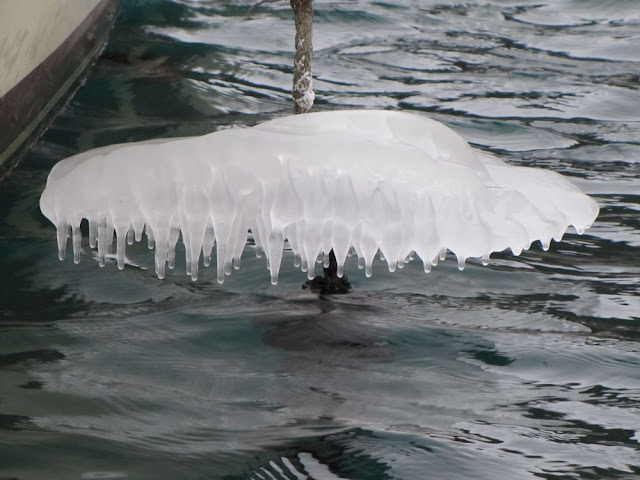 Because our actual visit to Skagway was so short, I thought it might be fun to check-out Dyea (pronounced dye-EE). I hadn't been and had heard it was very much worth the trip.

Our first stop along the way there was a lookout over Skagway. 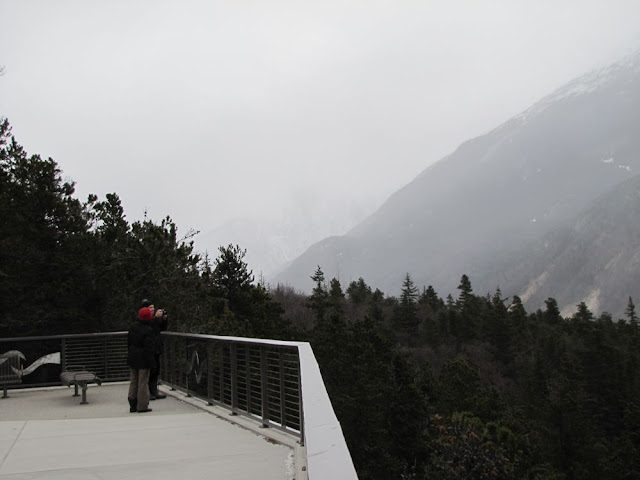 My in-laws at the lookout. 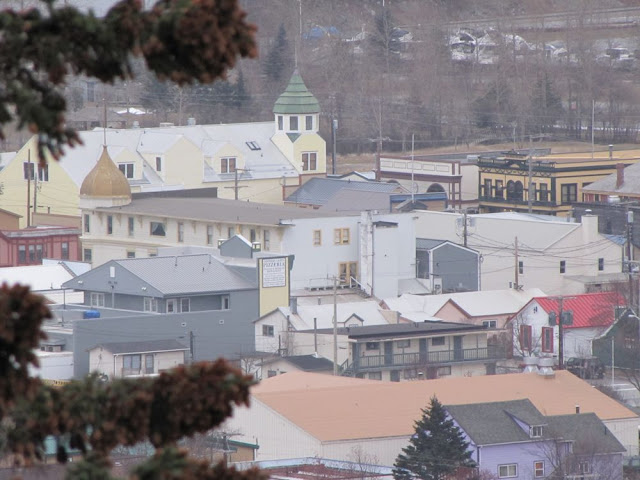 Downtown Skagway from another perspective. 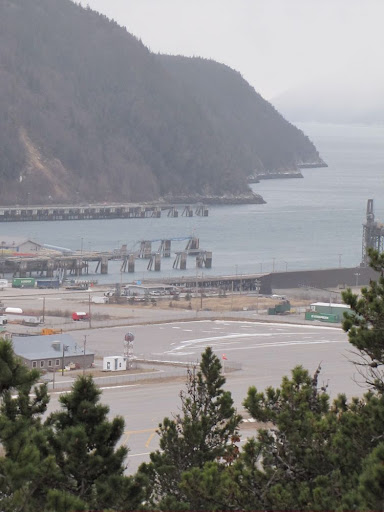 The docks and the Lynn Canal.

I enjoyed most of the views at the lookout, but not all of them. 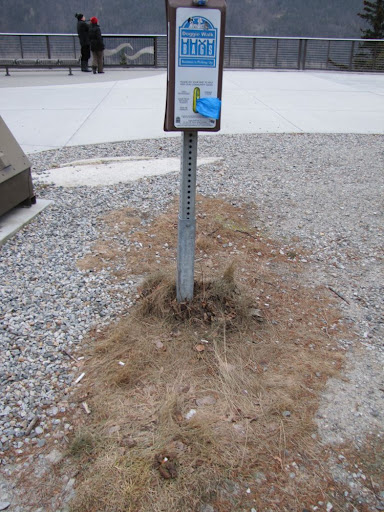 Yeah. Classy. Or Lazy. I can't figure out which.

The outhouse was worse.

We continued on to Dyea, stopping frequently to take in the scenery and wildife. 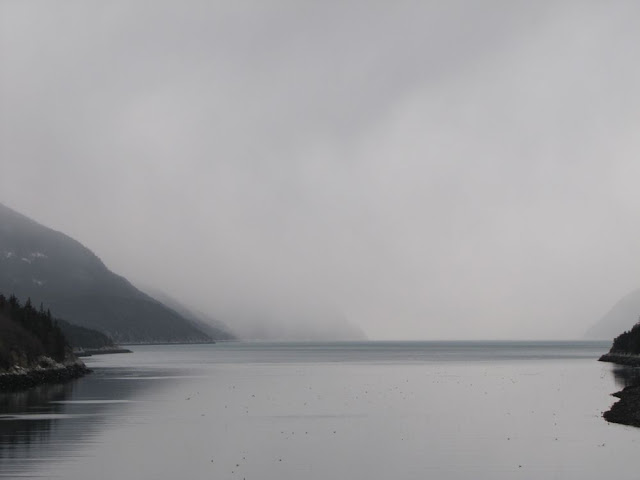 Looking down the Lynn Canal again. 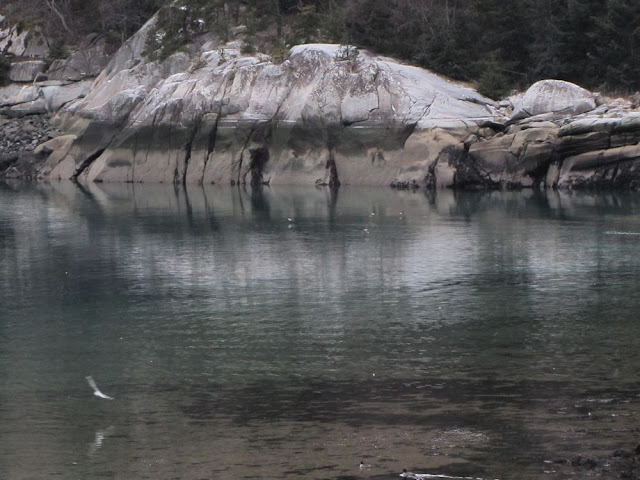 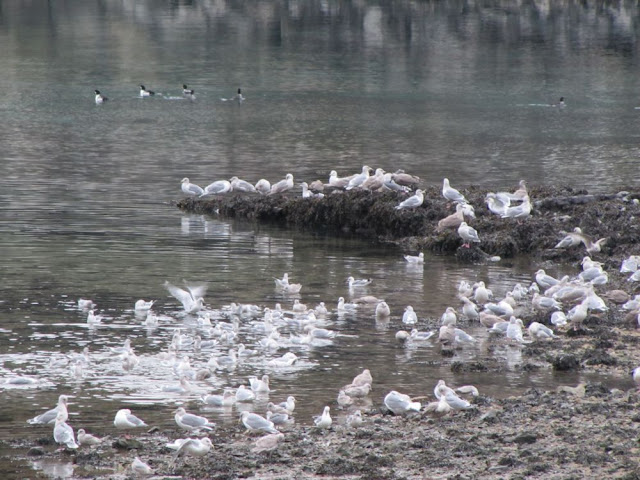 Abundant bird life.
Dyea is located at the end of Taiya Inlet. If you want to hike the famous Chilkoot Trail, that's the place to start. Over a century ago, it was a booming place as the Klondike Stampeders rushed to get to the gold fields around Dawson City. The stampeders were boated into the shallow, sandy/muddy inlet at low tide, where they rushed to unload their gear and get it to shore before the tide came back in. It must have been chaos. 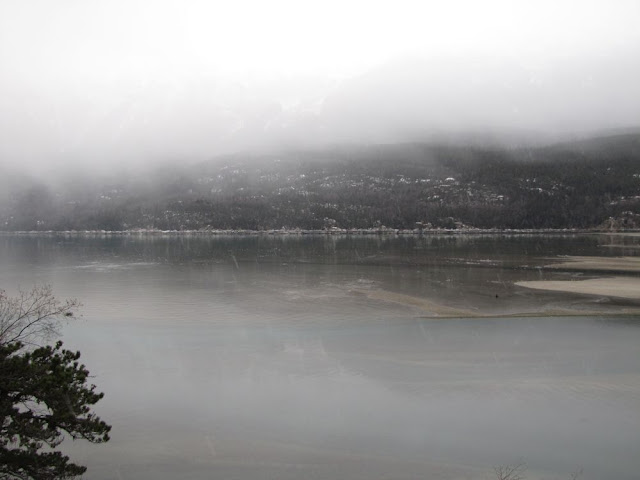 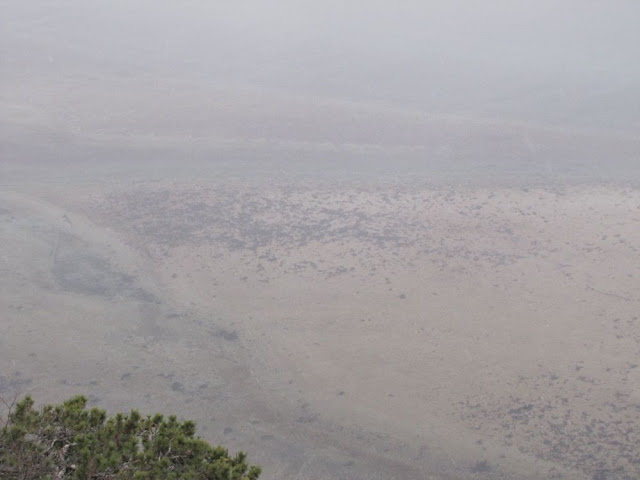 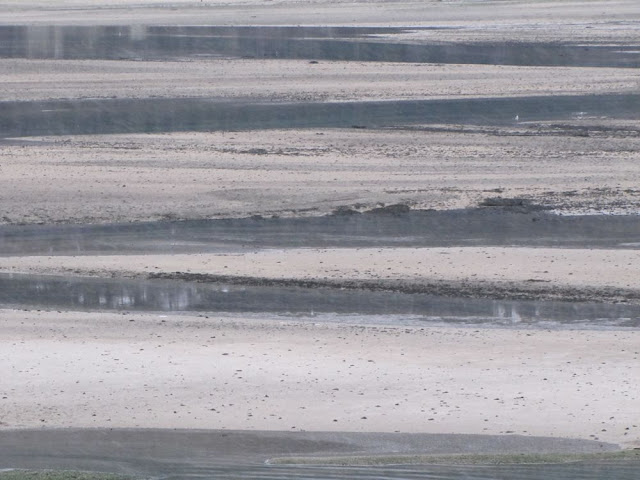 As we drove up the inlet, we saw about a dozen seals but they were always too far away to get a really decent shot.

We drove out onto the tidal flats, an area that was once underwater but is now climbing (fairly rapidly, geologically) in elevation thanks to glacial rebound and plate tectonics. 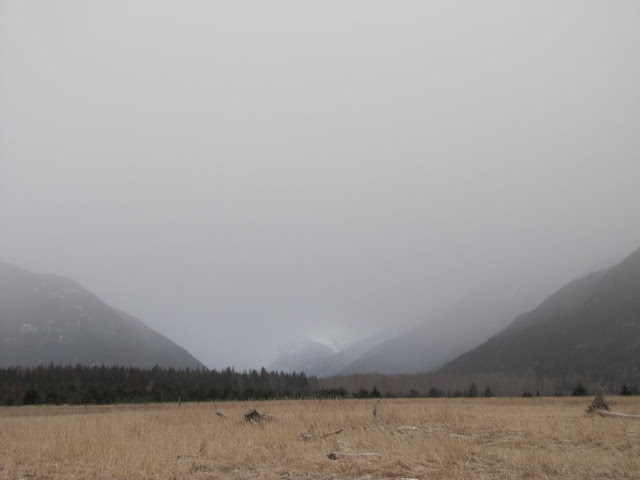 Looking inland from the tidal flats.

It was starting to snow heavily and, not knowing what it would be like through the pass and at the Summit, we started to head back - but not before a quick stop at the old Dyea villiage site. The untrained eye could never spot the historic Tlingit presence in the area and likely few would realize that there was once a booming tent town there, either. A few clues have been left behind, however.

If you look closely (and follow the signage), there are collapsed buildings, nearly gone. Pits and other holes. Discarded footwear. Bits of fencing. Rows of trees that were once planted as part of a Main Street beautification project. The trees on the old townsite are so tall and stately it's hard to believe that they weren't even there a century ago.

When the White Pass route out of Skagway opened up, the focus shifted and there was no longer a need for a townsite at Dyea. It died almost as quickly as it was born.

Tellingly enough, the last remaining false front (a wooden structure that was placed in front of a wall-tent to give it a feeling of permanence) belonged to the real-estate office. 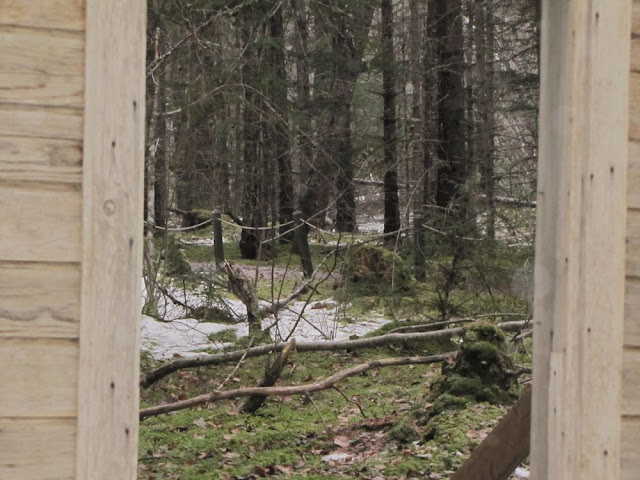 A view of the present through a window from the past.

The snow was really coming down and dusk was approaching. It was time to return home, but not before one more glimpse of the seals. 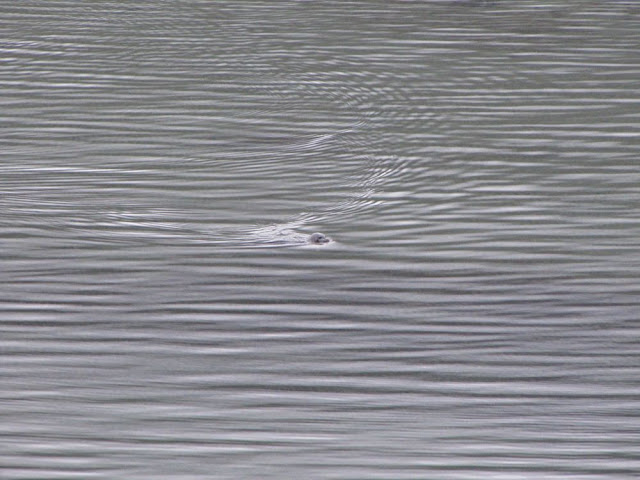 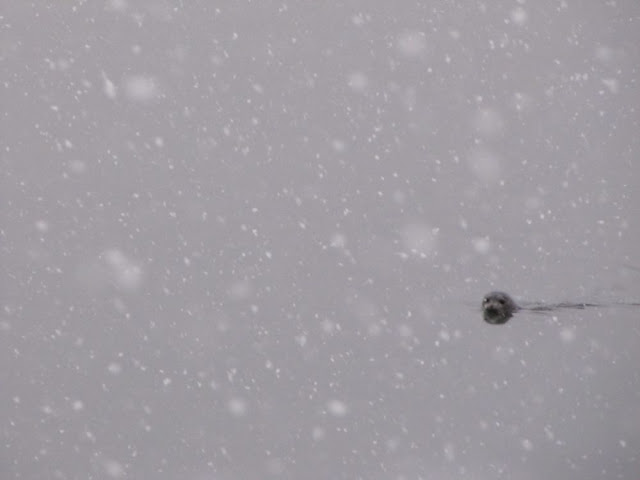 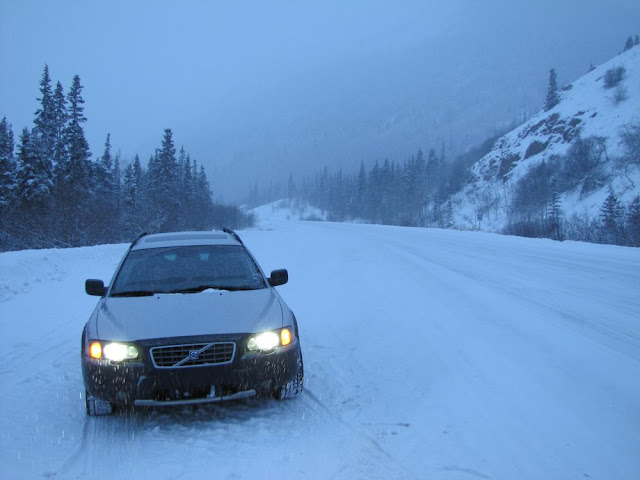 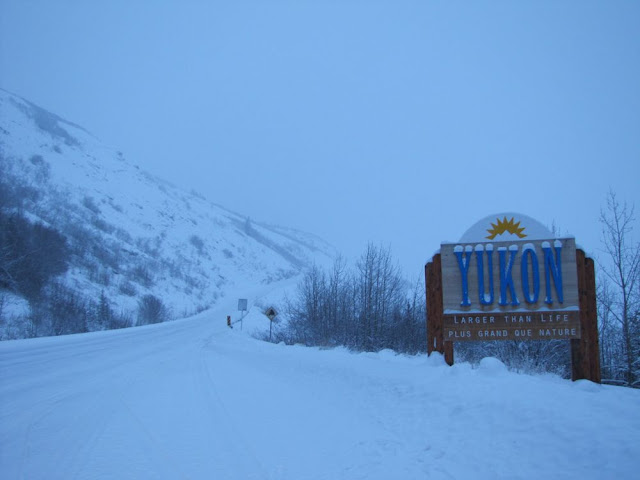 That trip was very cool!

Have never thought of visiting Dyea in the winter. Surprised there was no snow in Skagway.

Dyea grassy area on the road past the slide cemetery has very nice chocolate lilies and irises in early summer.

Thanks for the tip, Anonymous! I'll have to go back sometime in early summer!

WOw. Fun post and gorgeous pictures of places I've never been. I love to armchair travel when I can't for real, and so I felt like I was taking the trip with you. REALLY nice. So it seems that it is no big deal to go from Canada to the US through that pass - just drive from one country to the next, no questions asked? Cool! And your winter looks like what winter SHOULD be, not just this little light dusting of snow we get these days. So disappointing for me. I LOVE winter snow

Laurie, yes, you do in fact drive over the border... but then the border security checkpoint is down the road a bit, so not exactly no questions asked. It's definitely a good idea to have one's passport along. It's a long way to drive home just for your passport. :)