Imagine yourself on that night, a little over two thousand years ago. You are one of the magi, highly regarded as an astrologer, you are known and respected as a "wise man". You have traveled a long, long way from the east, following a star that foretells of a great coming. You are following the star so that you, a king, may pay homage to another.

When you arrive near your destination, you pay your respects to the local king, Herod, and ask where you might find the one you seek. Herod doesn't know, but asks you to inform him when you find out - so he too may pay homage.

You, though, are a wise one. You realize that Herod has no such intention in mind. When you've found the one you've sought for so long, you warn those who care about him. They flee Bethlehem - as do you. You never report back to Herod.

Enraged at the realization that you have fooled him and fearful that he may lose his seat on the throne, Herod calls for the death of the one you seek - even if that means the murder of all male children under the age of two in Bethlehem and the surrounding area.


The one you sought (and his cousin), however, have managed to escape.  And that child, the one whose star you followed, went on to perform great miracles that we talk about to this very day.

It doesn't matter whether you're religious or not, nor does it matter whether or not you believe it actually happened, the Tale of the Magi is a great story. It's a tale of suspense. Intrigue. Murder. A flight to freedom. A story of survival.

But the story would be hollow without the star that guided the magi: The first Christmas light.

Now we've got Christmas lights all over the place.  They're everywhere you go.  Tasteful or tacky, it's undeniable that they brighten our dark winter nights.  We may curse and suffer from frost-bitten fingers when we struggle to put them up in the winter cold, but without them the Christmas season just wouldn't seem as festive.

Yet, I have a problem with all those lights. Not just Christmas lights, but ALL of the lights that shine so brightly in the winter night. Sure, they're bright and they're cheerful (and even useful), but where did the stars go? 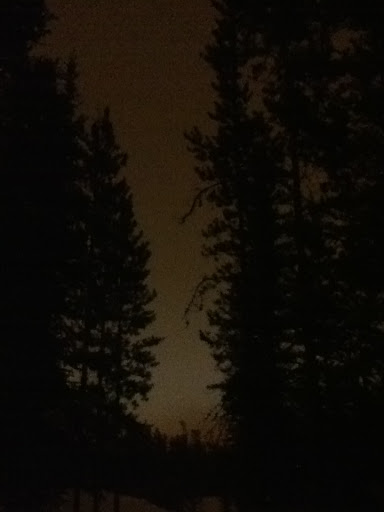 The parking lot lights that were installed at the Whitehorse airport are so bright, the stars, shining from millions of light-years away don't stand the slightest chance. (Admittedly, this picture was taken on a cloudy night, so the stars weren't going to be visible anyway.)
We've gotten so wrapped up in our own power-sucking light emitters that we can no longer see the most AMAZING light show in the UNIVERSE!!!

That's why, this Christmas Eve (and every Christmas Eve thereafter), from 10:00 pm until midnight, I propose that we turn our lights off - all of them (road lights, parking lot lights, house lights, store lights, building lights, etc.) - and then go outside to see the stars.  Let's look at the real Christmas lights.

(If you'd like to do your part for The Real Christmas Lights Campaign, tell us how you're going to contribute here.)

This is a really nice post, AND has a great message of its own, which I happen to agree with, as well. I have been unhappy because the timer on our barn light is messed up, and it lights up my bedroom til the middle of the night. You've just inspired me to stop cursing it, and go fix it, so I may have the blessed darkness. I also have to normally get up and let the dogs out in the middle of the night, and usually DO pay attention to the beauty of the stars when I'm hope. It's always good to be reminded to look for the beauty of nature around us, though. Thanks.

Ah, is that what it is!? We were playing hockey in Hillcrest the other night and were amazed by the "yellow-orange" glow of the sky through the trees... till a Hillcrest local told us it was just the city lights, LOL. yep, no stars that night.

Yeh!
I promise to do something about the phone i have, it always has 2 lights on (blessed me, the only artificial lights in our lot and beyond at night)
I do want to say it is amazing, that where i live but also having been camping for the last month close to cities with multi millions, the night sky incredible. Not dark at all the milky way a haze and infinite stars beyond.

I hear ya. All the lights are messing up animals that migrate. Though in the scope of this big problem, I think that Christmas lights are probably a fairly small piece of the pie.

I don't put up Christmas lights outside, but it's good to be reminded of these things, so thank you.

On the downside, I was really looking forward to the meteor shower last night, and alas, it was not the lights that prevented me from enjoying it, it was the clouds. :(

Too cloudy here, too. There's a lunar eclipse on the solstice, though!

Funny...now that I "live off the grid" I'm always in a state of conservation for the obvious reasons(aka: in the dark!!!) As a result I am able to savour the night sky ALL of the time so, at Christmas I endulge myself & fill my cabn with colourful lights & I love them more than I ever did while living in the luxury of the city!! While I am not about to give up my Christmas dazzle...I will say, leaving the city for this life, I sure have learned the lesson of "want vs need" more than most!! And I DO love my stars :)
Merry Christmas Michael :)