The Yukon's Member of Parliament, Larry Bagnell, is legendary for somehow being in a million places at once. I've lost track of the number of times I've seen him get off the plane only to have someone perplexidely ask him how he was getting off the plane when they just saw him downtown.

Perhaps he has a twin? Nah. I am beginning to suspect that Larry is a friendly wizard with magical teleportation powers.

It would appear that President Obama has the same magical powers. The guy's everywhere. Why, just this morning I read the Globe and Mail online and discovered that he was involved with an agreement between the Province of Ontario, Kitchenuhmaykoosib Inninuwug First Nation, and Platinex, Inc.

Remarkable!  No wonder the guy won a Nobel Peace Prize. 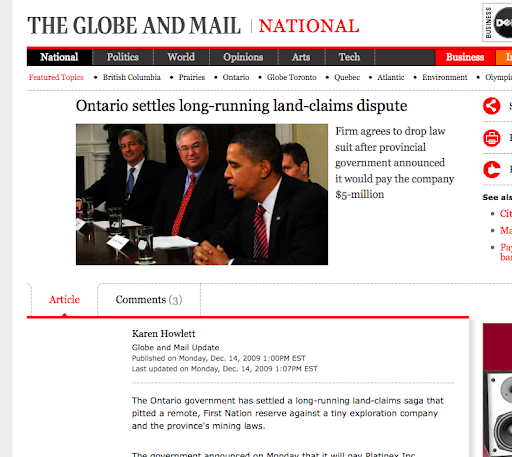 As seen on globeandmail.com. The picture has since been removed.


Where have you spotted your politicians lately?

Larry reminds me of Audrey McLaughlin - she too just seemed to be everywhere I was. I'd see her in Inuvik one day, in Whitehorse when I got back a few days later and then in Vancouver the next week when I flew down to pick up a bus to bring to Whitehorse. I last saw Larry on Friday, rushing out of his office with a bag that looked airport-ish. As much as I admire him, I worry about him, too - he's obviously working too hard and some days looks like shit.

I can't imagine being an MP and also having kids. Hmm... maybe he should run for Premier and take things easy for a while.

That wouldn't work, Michael - arrogance seems to be in the job description for Yukon Premier. They might have added "pathological liar" to it too, but I'm hoping that Fentie just slipped in unnoticed.