As a dad, how could my heart not swell with love when I heard my daughter say some of the sweetest words I could ever hear. Our conversation went like this:

"Jade, what do you want to do this weekend?" I asked.

Excuse me for a moment, please. Just writing about gets me all... Aw, here I go again..!

Of course, that's exactly what we did this weekend. We went camping! (Yaaaaaayyyyy!)

Unlike last weekend, this time we had company. Jason and his son joined us for our weekend adventure.

However you want to look at it (either the vehicle was too low and wide or the rocks too high and narrow) few people are so committed to going camping that they're willing to drive their vehicles up a boulder-strewn access "road", denting and scouring the paint off of the bottom of their car as they go - and then, after they arrive, show not the least bit of dismay over the new "customized by nature" bodywork.

That's because Jason knows how great it is to go camping.

But it's also because the weekend was a truly momentous experience - a right of passage - for Jason's son: It was his first-ever camping trip! Yaaaaaayyyyy!

After setting up camp, we got right down to the important business of hiking. The kids led the way. 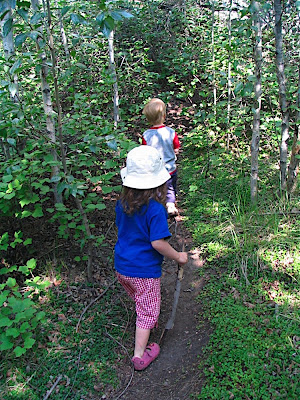 Leading the way. Somewhere along the trail, Jade found a perfect Jade-sized hiking stick.
Sometimes, though, we dads had to step in to lend a hand. 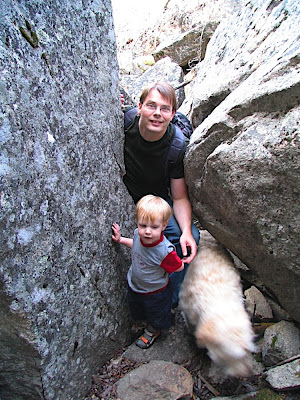 Jason and son squeeze through a gap in the boulders - which wasn't too different from the drive into camp.
We didn't get far into our hike (by big person standards) before lunch and nap times forced us to turn back - but we did get to take in a fabulous view. It doesn't matter how many times I see this view, when I try to picture it in my mind's eye later on, it always seems surreal. Here's a great shot of Jade and I blocking the fantastic view: 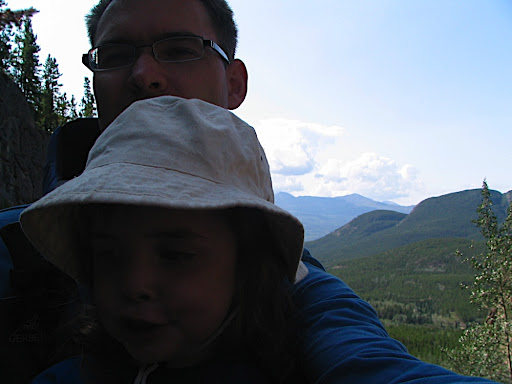 Doing our best to keep the area where we were camping a secret from the hordes of other campers out there. 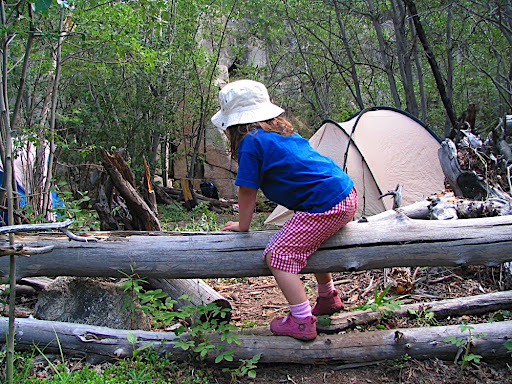 Returning to camp.
In spite of my best efforts to command her to do so, Jade would not nap. A couple of hours of trying later, when Jason's son woke, I gave up and we went for another walk - this time to a pond. It was sunny and hot and the dogs needed to drink and cool off. 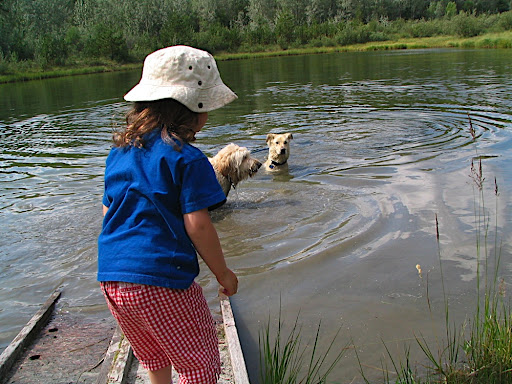 Without any rocks to throw for Nanuq, Jade turned to stalks of grass. Nanuq was just as happy to chase those.
The pond was crystal clear until the dogs got into it. Stirring up the mucky silt, the air filled with a sulphury stench. I curled my nose. Jade continued throwing blades of grass. Jason's son vomited. 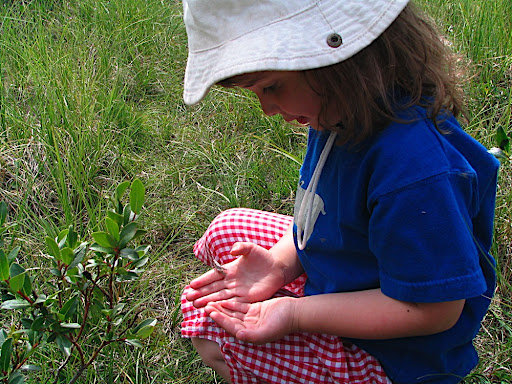 Taking our time, exploring every little thing we see along the way (like this grasshopper).
As Jade and I walked, I sang a song about "Goin' on a Lion Hunt". Jade loved the song and quickly assumed the role of the lion. 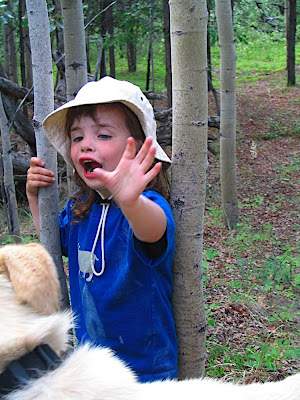 RRRAAAAAAAAAWWWWWWWRRRRRR!!!!
I won't go into details about the rest of the trip - like how it took forever to get Jade to fall asleep, or about the great swim we had at the Takhini hotsprings the next day - but I will say that, even though we didn't go far, I had a great time. I'm pretty sure that Jason and his son did, too. And I know Jade did. 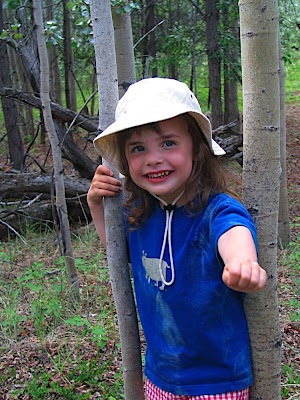 Jade loves camping.
I'll close out this post with one more story from our little camping expedition.

Jason's son woke in the middle of the night, asking for water. Jason went to give him some water but inadvertently splashed it all over his son's face. A rather cold and abrupt way to be brought to full wakefulness, Jason's son started crying and asking to go home.

"Camping!" exclaimed his son. His tears immediately stopped, he smiled, and he went right back to sleep.

Wonderful post Michael! Some of the best memories I have with my daughter are our camping trips when she was young.
Smiles

Love Jade's sweet smile in the pictures. It's easy to tell she enjoyed herslf.

you are such a great dad

Ha ha, Indigo, you wouldn't have thought so if you'd heard me shouting at her to "lie down and close your eyes!!! That's the last time I'm telling you!!! Don't make me come back here and tell you again!!! That's enough! I've had it!!! etc."

Hurray for camping! Hunter loves it so much too. While we are in a camper, he is in love with other folk's tents. He will play in them for hours!

Hi. I have a blog at www.picturecamping.com where I feature people's posts about camping, and I would like to send my readers your way. Of course I would give you credit for quotes and would link back to your site.

Thanks for considering this,