My apologies for the dearth in posts lately. I've been on the road a fair bit (something that I'll be sure to write about in the near future), but have also been occupied by a few other things. This entry is about one of those things.

When we moved into our (ug, pink!) house, one of the few things I liked about it (at the time - it was pink after all) was the greenhouse. I think I liked the greenhouse because it wasn't pink (yuck!), like our home was.

Sadly, election signs doth not make for good building material and the greenhouse covering had to be replaced. With the help of a friend, I did just that, but the damage was already done. The wood was rotting and I managed to get only a couple more years out of it before I decided to tear it down and start from scratch.

The old greenhouse.
First, though, I needed to build a new shed. It was nearly impossible to retrieve anything from the little (pink) shed without tripping and impaling myself on one thing or another in the cramped little box.

Work started on the new shed last summer. I designed it and most of the work was done by my brother and his associate, Ryan. We weren't able to finish it before the snow came, but it's 99% complete now and I'm ready to share some pictures.

When I started designing the shed, I wanted to include enough space for working on my canoe, the bikes, the lawnmower, and camping gear storage. 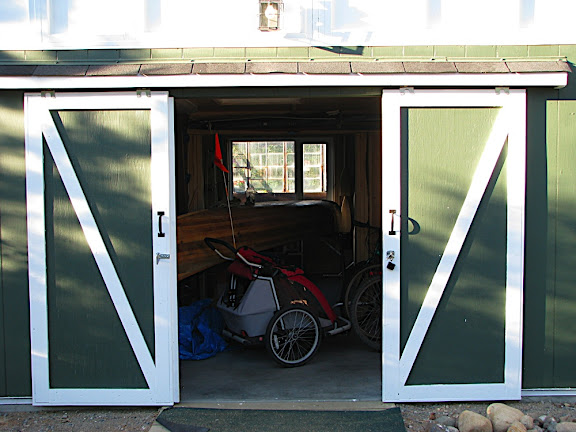 Welcome to the shed, with enough space for working on my canoe, the bikes, the lawnmower, and camping gear. I designed the doors as sliding doors because I didn't want to have to shovel piles of snow to get inside in the winter. 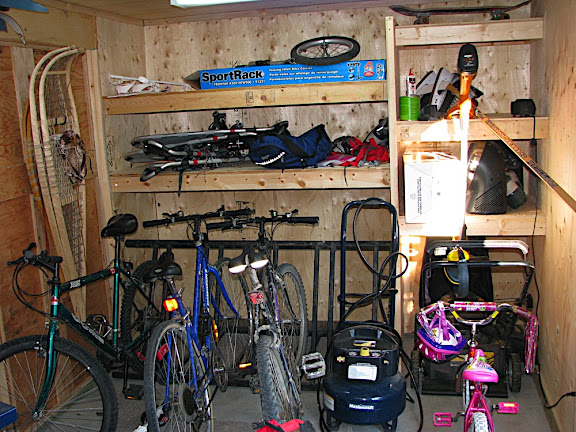 The bikes and the lawnmower. 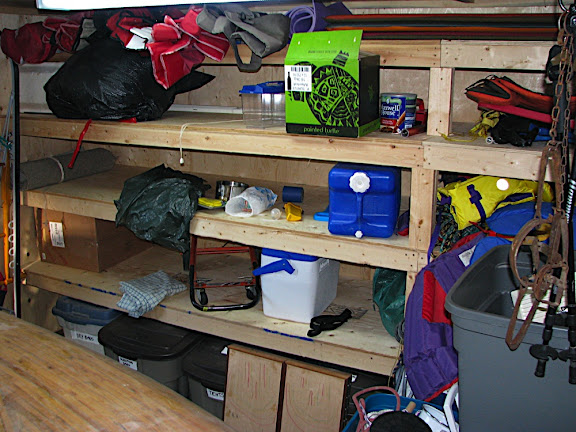 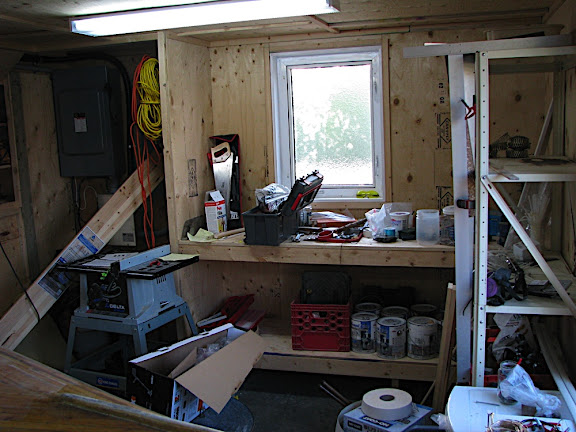 Lots of workshop space (still a work in progress).
My brother had an idea to include a little something special in the shed... 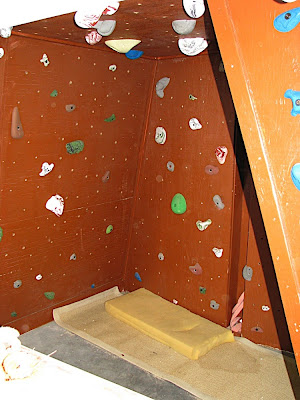 The bouldering room - perfect for practicing climbing technique, or as a place to let kids climb the walls. 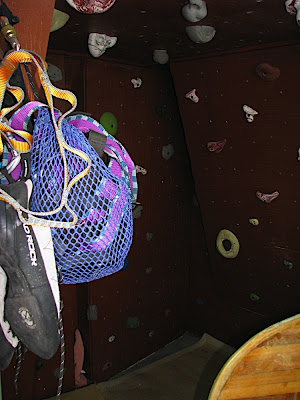 Of course, designing the shed the size I wanted it didn't leave much room in the yard for the greenhouse. Not wanting to lose all of my yard space, I took the lead of any city with space constraints: I built up! 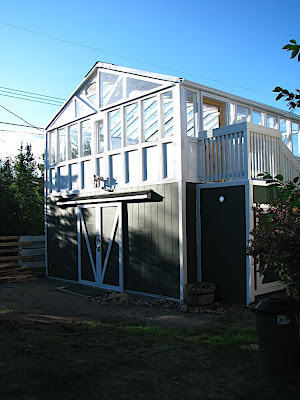 The greenhouse/shed combination.
Let's take a trip upstairs, shall we? But first, let's stop and admire the vented fuel cabinet and garden tool storage area that was built under the stairs. 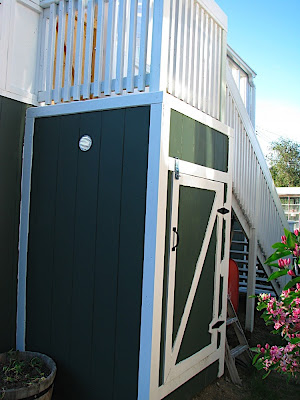 The vented fuel cabinet and garden tool storage area, which is filled with... 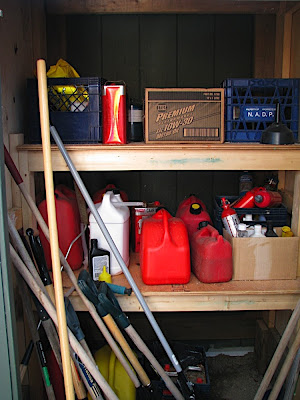 ...fuel and garden tools!
Resuming the tour, let's head up the primed but not-yet-painted stairs... 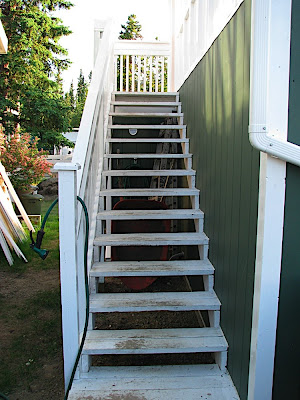 The stairs.
Given that the shed is rather large, the greenhouse is, too. Let's take a peek inside the custom-made door... 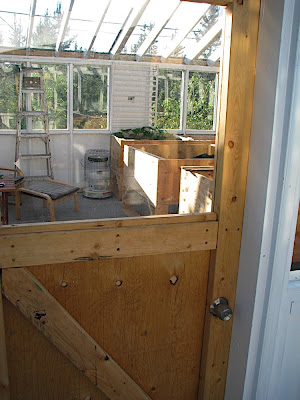 Peek!
Not all of the beds have been filled, but when they are, there is going to be ample space for growing things! The floor and walls of the shed have been built well above code to handle the weight of the filled plant boxes. 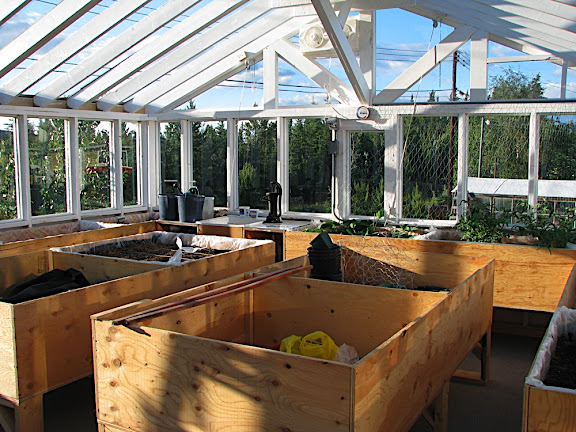 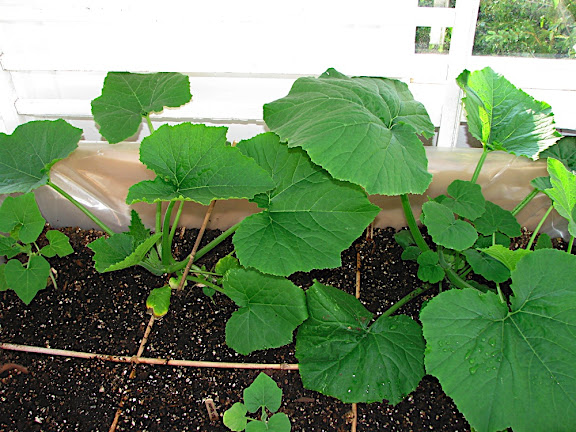 Some of the beds are filled already! 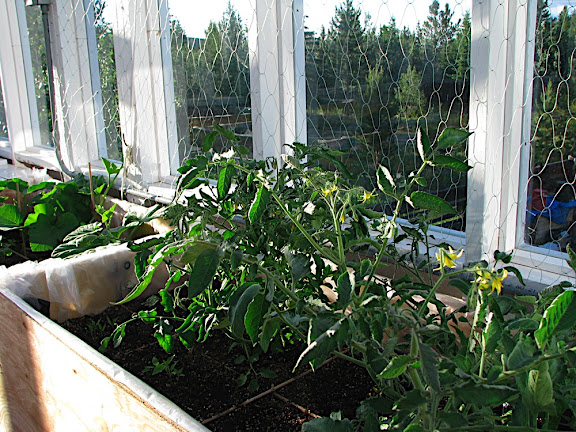 Tomatoes with supportive netting.
One of the things I noticed in the old greenhouse was how the boxes dripped every time we watered the plants. Eventually, the boxes started rotting around the base. I decided to try a different approach and lined the boxes with plastic. On top of the plastic, I stacked yogurt containers, which I covered with a layer of chicken wire and black garden carpeting. On top of all this went the soil. With this design, excess water (in theory) drops through to the open plastic-lined area, so I can't over-water my plants. Conversely, if I miss a watering, the soil will remain moist when the excess water in the chamber evaporates back into the soil. So far, it has been working pretty well! Eventually, I'll get around to putting 1" strips of wood along the edges of the boxes to help protect and support the plastic. 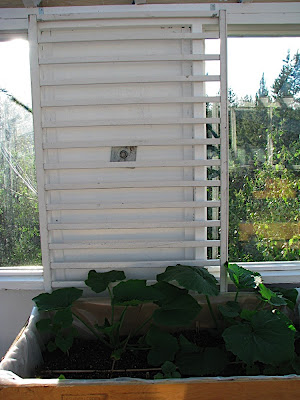 At Whitehorse's altitude, our evening still get a bit cool. On top of that, spring comes late and fall comes early, so it's important to make sure the temperature in the greenhouse is warm enough for the plants. Later in the year, I'll probably use this kerosene heater to help fend off the frost. 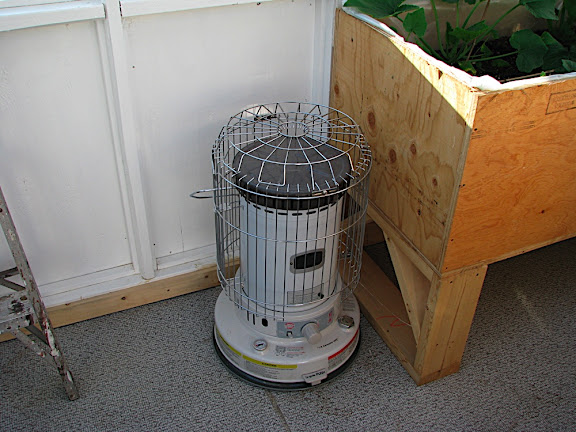 The heater, which will also be used to heat the workshop when I'm working out there in the winter.
While it may get cold in the evening, it can be positively sauna-like during the day. I needed to build in a ventilation system. In discussions with Tim and Ryan, we eventually came up with dual approach to cooling.

The fastest and most effective way to cool a greenhouse is to vent the gables. Not wanting to blow a tonne of money on complex and expensive window cranks or levers, we used custom-cut plascolite (plexiglass) in a custom-cut and sealed wooden frames and designed a pulley system to allow the hot air to vent upwards. Rain is prevented from falling inside by flashing over the windows. 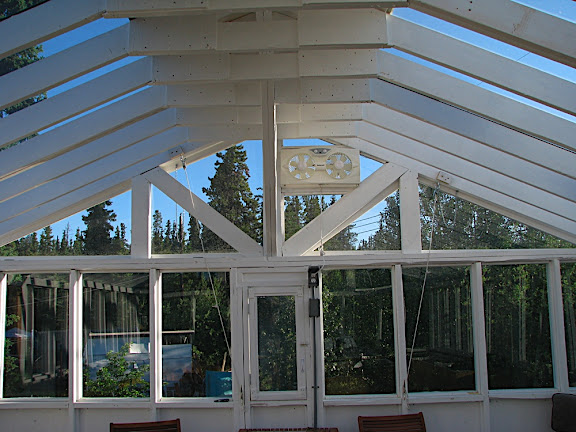 Windows closed in the gables. 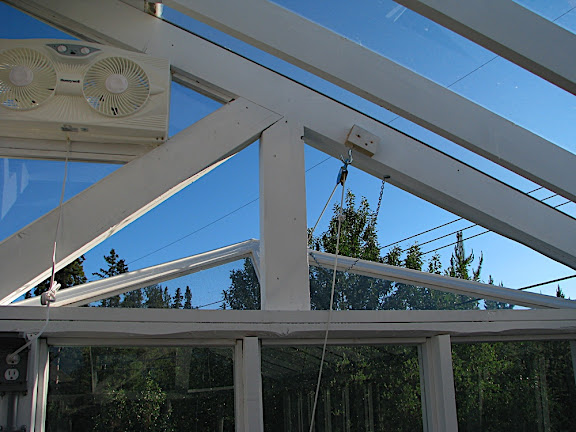 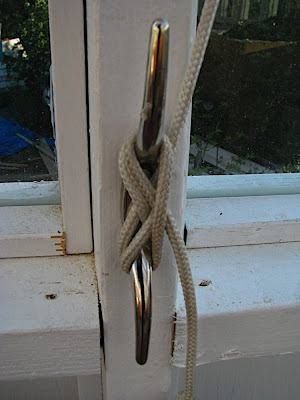 Tying off the window to the desired level of "openness". 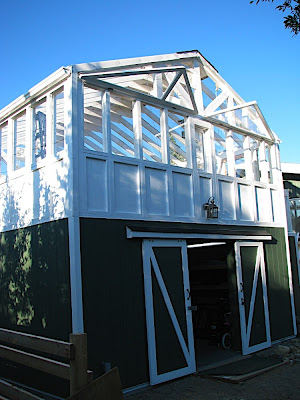 The venting windows, as seen from outside. (There is a back-up chain to prevent the windows from opening too far. 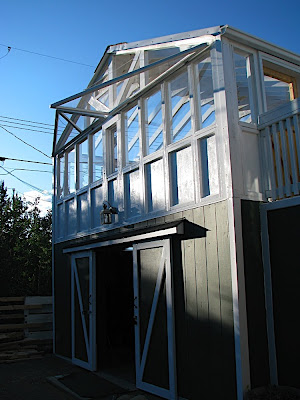 From the other angle just because I'm extra proud of the venting windows. 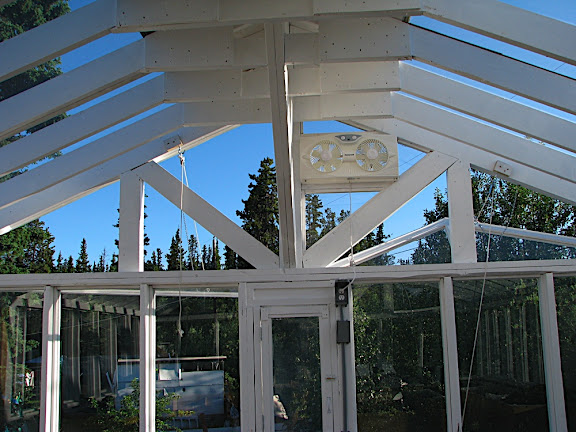 Both windows open from the inside.
The vented windows aren't the only way to keep the greenhouse at a reasonable temperature, though. Just in case nobody's around to open the windows, we installed a couple of temperature-sensitive blower fans that come on automatically when the temperature in the greenhouse gets too high and turn off when the desired temperature is achieved. With the handy-dandy light switches underneath, we can easily turn the fans off whenever we want. Yes, my greenhouse is wired for power! 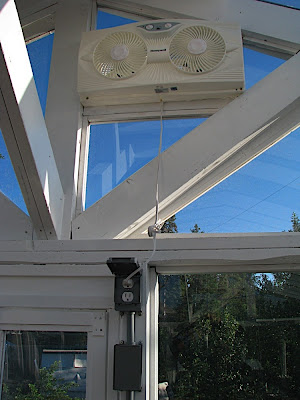 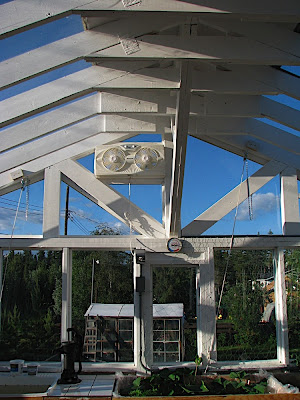 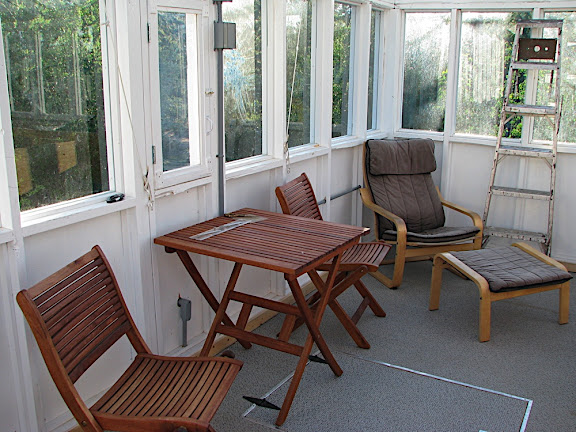 Workspace. And relaxing space. I choose to call it "worklaxing space".
So why did we only get the greenhouse finished this year? The big hold-up in construction was the roofing material. I wanted something stronger and safer than glass, but Lexan was too flexible and too expensive. Eventually I discovered Plascolite (plexiglass), which was much cheaper and much thicker and won't (shouldn't) yellow in the sun. I didn't receive the Plascolite until this spring. I couldn't order it in sizes long enough to reach right up to the ridgepole, so we shingled a section of the roof for extra strength and as a place to walk, if repairs are needed to the roof. To seal the seam between the sheets of Plascolite, we applied a strip of seam sealing tape. 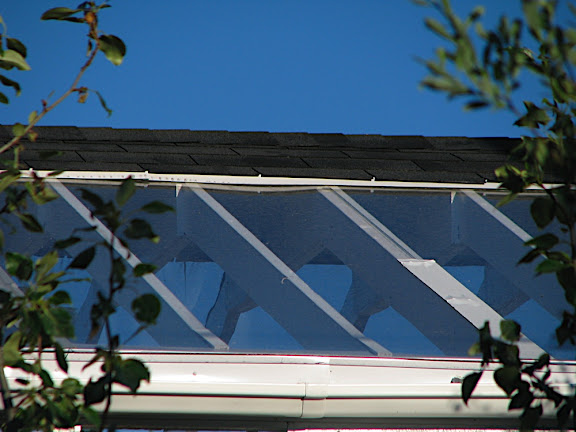 This picture only shows a half strip of seam sealer on the roof. I'm waiting for more to come in to the hardware store.
All of the windows (with the exception of the gables) are made out of regular glass, sealed with silicon. I went with regular glass for those windows because it's cheap, easy to cut, and easy to replace if I have to replace it.

Now, if you're a gardener, you're probably wondering, "The greenhouse is on the second floor. How does he get water up there for the plants? It must be awfully inconvenient."

That couldn't be further from the truth and it's one of my favourite parts of the whole thing! The water supply starts with the rain, which falls on the greenhouse, runs into the eaves, drains down the spout, and into the rain barrels. 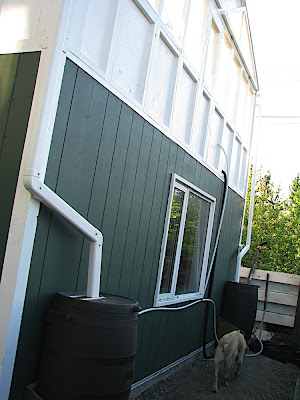 Rainwater collection system.
From the rain barrels, the water gets brought up inside by... 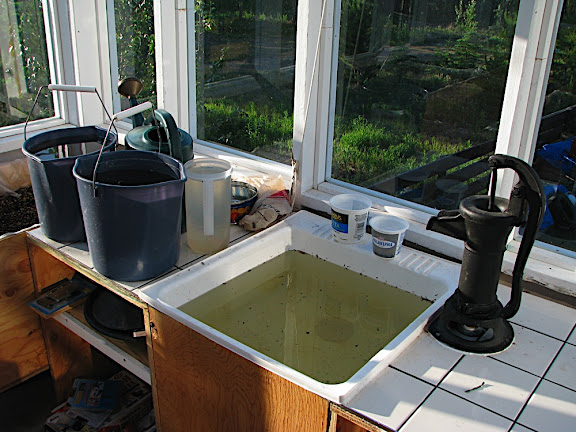 The hand pump! The big laundry tub drains outside and away from the greenhouse. Right now, it's full of water that we're pre-warming for the plants. Warm water helps to keep them happy!
Yup, if you haven't been able to tell, I really,really like the shed/greenhouse and am 100% glad that we built what I wanted, the way I wanted it. It was a great learning experience I'm enjoying the whole thing immensely.

In fact, I'm thinking of moving in and renting out the real house. 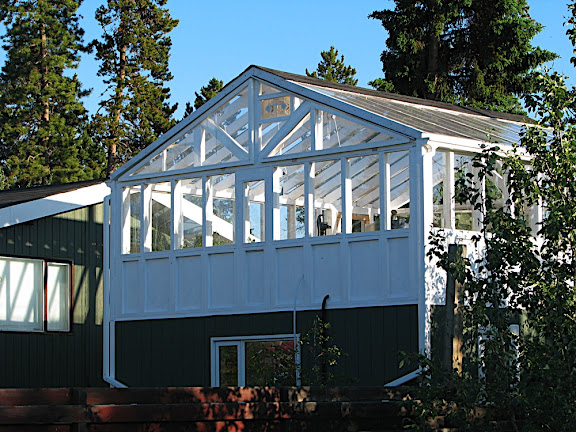 Seriously, I am jealous beyond belief! That is gorgeous and so well thought out. Better watch out, you could come home and find us squirreled away up in there!!

Michael, this is absolutely gorgeous! Wish I'd hired you to build my greenhouse!! Enjoy.

That is the most well thought out greenhouse I've ever seen!

What are the specs on this great combination? I'd love to see your plans - do you think they could be adapted?
We have less space, but an equally irksome shed and I love the Shed/greenhouse combo - brilliant!
Did you have to get permits etc?

We had to get permits, but the process was easy. I just told them what I wanted to do and they either told me it was okay or gave me helpful suggestions.

The design is easily adaptable. If you want a copy, just let me know.

That is beautiful!
Your house was pink? OUR house was pink when we bought it! Pink shutters, pink doors, pink indoor/outdoor carpet on steps and porch, pink fireplace mantel and pastel pink and blue everywhere inside! UCK!!!!!!!
Except for the bathroom which had the exact same countertops as the Brady Bunch kitchen, BRIGHT BRIGHT orange!

Hi Michael! I love your double decker shed and greenhouse!!!

Great pictures! Thanks for posting them. Your brother is a pretty talented guy I must say :) The next time you come to Ottawa, you'll have to come and see the backyard he just finished for us, absolutely beautiful! I am quite envious of your worklaxing area though :)

I am considering building something rather similar to this. I would absolutely love to have a peak at your plans... I've been trying to estimate the cost as well... so if you have a ballpark figure that would be great as well.

Thank you so much for sharing!!!
:o)
jo.geri@comcast.net

Hi Jo, alas, my plans were nothing more than some rough sketches from the top, side, and front. I'll send an e-mail regarding cost.

That is such a gorgeous house indeed. I admire your brilliancy when it comes to planning and implementing home improvements. You just built a greenhouse which is very conducive for living. I look forward to learning more ideas from you.