Spotted in the UK...

The publicity being generated by the HireMICHAELforHamiltonIsland.com video has been astounding!

What's equally astounding is how many of you, my readers and supporters, have come forward with your own ideas to help with the campaign to get me hired for Tourism Queensland's "Best Job in the World".

Check out this picture, which was recently sent from a supporter in the UK... 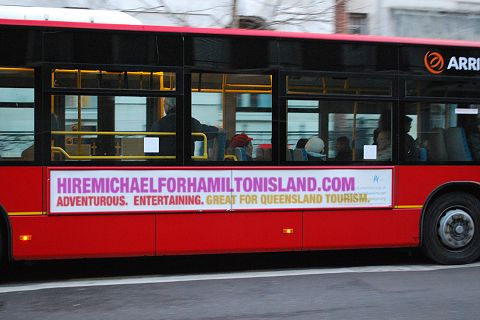 Lately, though, I've been hearing new things: I've heard comments from some people that they're planning on making their own youtube videos to support the HireMICHAELforHamiltonIsland.com campaign and I've even heard whisperings about public support rallies if I make it to the Top 50.

I've set out to do something daunting. To be the one person selected from 10,000 other eager applicants is no small feat. Your support and your encouragement and your enthusiasm is what's going to make this happen.

You guys are the best.

Well, gullible me fell for the old bus trick! Though, you could stick a banner like that on your car:)

Michael, we're only supporting you so we can visit(lol)

Okay - dumb question but how do I cast a vote for your video? Where do I go? What do I do? Help! I need a "voting for Michael for dummies" guide!