The making of a "Best Job in the World" application video...

If you haven't seen the video yet, you can watch it here.

Wearing flippers while running on snow is not easy. The flippers do not work like snowshoes. 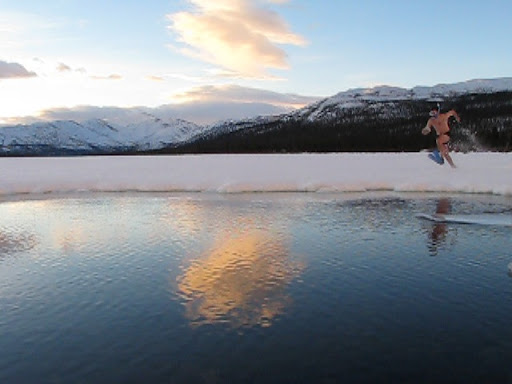 Running in snow with fins: not recommended.
But maybe I'm getting ahead of myself.

I knew I was going to apply for "The Best Job in the World", but wasn't sure what my application video was going to be about. How does one communicate that they're adventurous, entertaining and love outdoor activities in less than sixty seconds? I watched a few videos on the site and most of them were of people communicating their adventurousness, entertainment value and love of the outdoors by sitting there and talking about it. Yee-haw! Most of the Canadians and (Northern) Americans were doing it by sitting in their backyards in their bathing suits. Yee-haw! It got old pretty fast.

The Inspiration
When I was a kid, growing up in Regina, Saskatchewan, my family would head out to Wascana Lake on the weekends for some ice skating. One cold, cold day, I watched a bunch of crazy adults go running into a section of the lake from which the ice had been cut, swim around for a bit, and then run back out to a heated tent. They were whooping and hollering and the onlookers were cheering and there were smiling faces all around. Some of the smiles were chattering ones, sure, but everyone was smiling.

Of course I had to try it. Just not in Wascana Lake. It's filthy.


Getting Ready to Shoot
Armed with my inspiration and the shots I wanted already planned in my head, I started preparing for the shoot.

As you might imagine, going swimming in a frozen lake is not easy. Not because of the cold water, necessarily, but because of the frozen water. With three feet of ice sitting on the lake, it was going to take some work to get at the water.

I started recruiting volunteers. Dennis at FishonYukon.com loaned me an ice chisel and an auger. My neighbour, Cathy, loaned us her chainsaw. Another neighbour, Atlatl Mike, volunteered his time.

To make sure that we didn't do any damage to the lake while cutting the ice, Atlatl Mike removed all of the chain oil from the chainsaw and replaced it with corn oil. Ryan from down the road offered to ride his snowmachine out and help with the difficult job of hauling ice. In the end, he blew a belt on his snowmachine and couldn't join us.

Dark and early, Atlatl Mike and I drove up to Fish Lake. We needed to work quickly for the shot I wanted. The sun was rising over the mountains and we had to film before the sun started shining behind me, ruining the shot.

Fortunately, we were in luck! There was open water where the lake flows into a creek, and the ice surrounding the open water was thick enough to walk on. 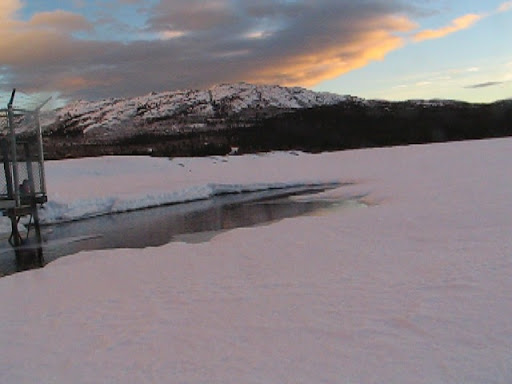 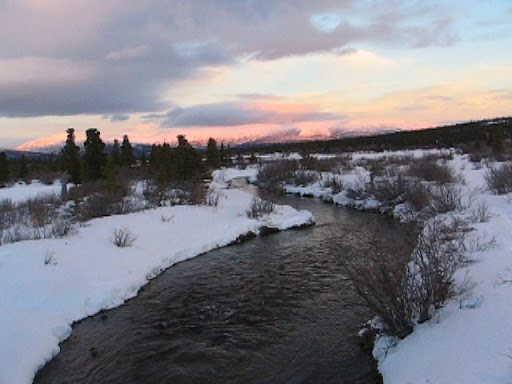 Outflow
Preparing the Site
Before driving up to the lake, I had run through every "what could go wrong" scenario I could think of and had prepared for each one. Safety throw ropes with lifejackets attached? Check. Rescue poles? Check. Blankets and a heating pack? Check. Phone? Check. Car key on the car's drivers seat, ready for an emergency? Check. Safety crew trained and ready? Check.

All of the safety gear was set up and ready for action. Now all we had to do was clear some ice and snow so I could get out of the water easily and safely. 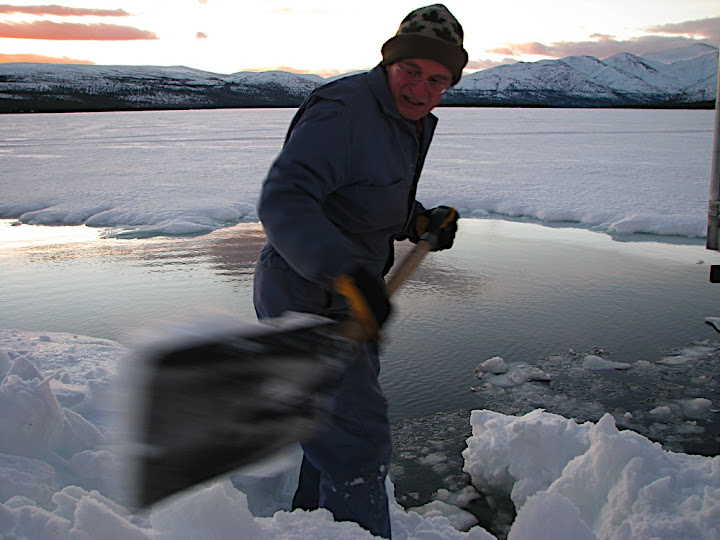 Atlatl Mike clears a path to the water. 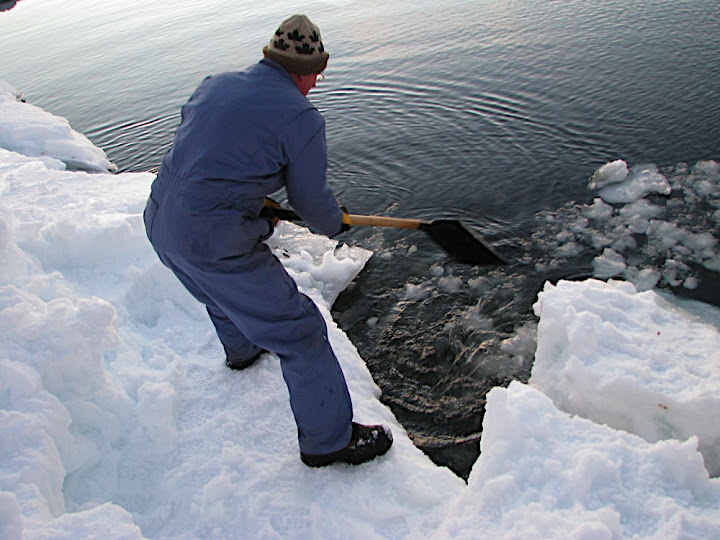 Atlatl Mike breaks some ice away so I can climb out of the water more easily.
After the egress route had been cleared, I set the camera up on a small tripod and framed the shot. I showed Atlatl Mike how to start the camera and let him know that he shouldn't move even a little bit while the camera was running or the sound of his boots crunching on the snow could ruin the whole shot. There would be no second takes.

With the site prepared and the camera ready, the time for snorkeling had arrived. 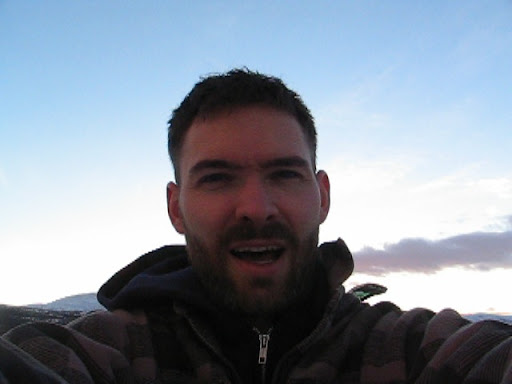 Recording my last will and testament... 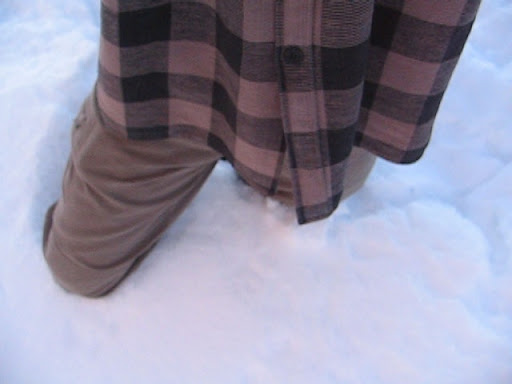 ...while standing thigh-deep in snow.
As I walked out onto the ice, I was surprised to realize that I wasn't having any second thoughts. As I stripped down to my bathing suit, it dawned on me that I had made a firm decision to do this the night before - and that I was more committed to doing it than anything I've ever committed to doing in my entire life.

I was committed. I was confident.

The Swim
I was crazy to think that I could run through snow with flippers on my feet.

Atlatl Mike started the camera and I stood there in my bathing suit and snorkeling gear, counting off the time needed for the scenic opening shot before I made my grand entrance.

I lunged forward, ready to run gracefully through the snow before taking a giant leap and making a spectacular cannonball dive into the water.

Instead, I tripped on my flipper.

I lurched back up and started running for the water again.

Just as I was about to take the leap for my spectacular cannonball dive, my fin caught the snow again and I went down, hands resting on an icy ledge under the water.

I decided to go with it and let my momentum carry me into the frigid water. 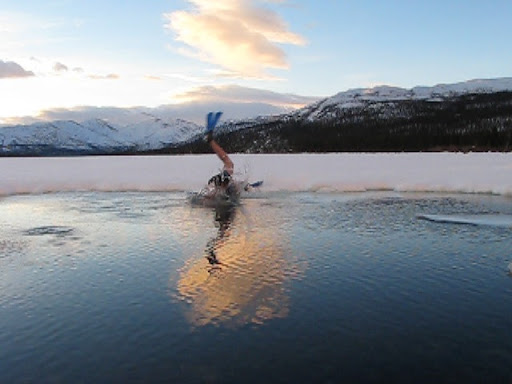 A few people have asked me if I was using special effects to make my video. I assure you... 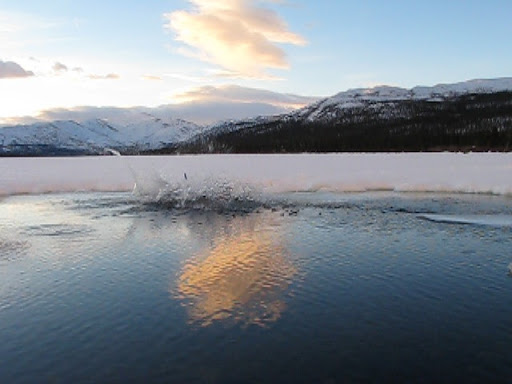 ... I was not.
Cold Water Submersion
I was expecting the gasp reflex: an involuntary intake of of air or water due to cold water submersion. The gasp reflex never came.

Instead, the first thought that floated through my mind when I was fully submersed was, "This isn't anywhere near as bad as I was expecting!"

Maybe my cold-receptor nerves were overloaded to the point where they became non-functioning, or maybe my adrenaline was flowing a mile-a-minute, but I didn't feel any coldness at all.

I swam right for shore, forgetting all about the underwater camera that was attached to my wrist. 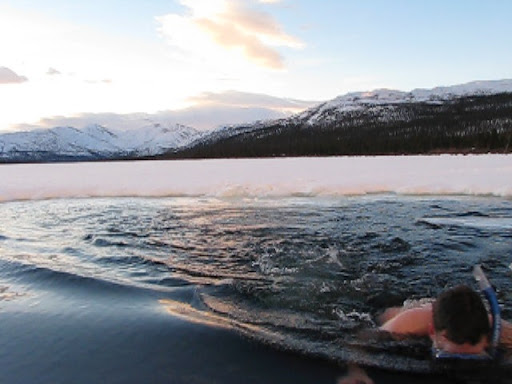 Swimming right for shore.
Back on Dry, Snowy Land
As quickly as I was in the water, I was out of it. The exit route worked well, with one small exception. 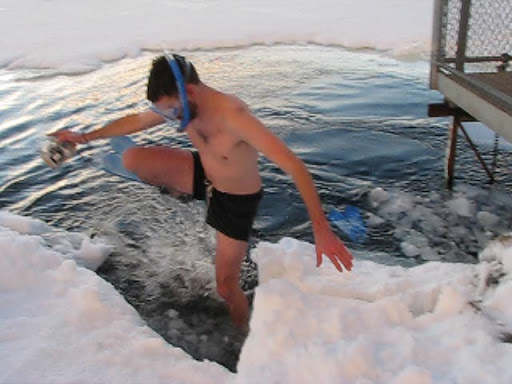 Stepping out of the lake, one flipper at a... 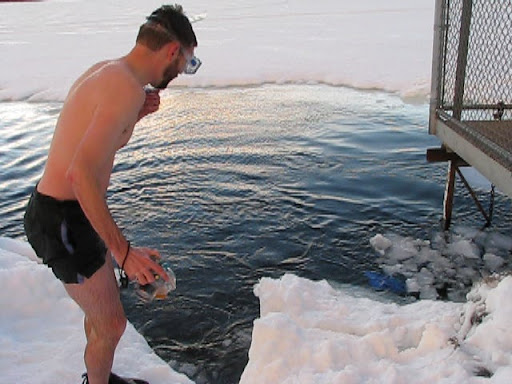 ...hey! Where did my other fin go?
One of my fins had fallen off and was drifting towards the lake outlet. It was more important that I get dry and stay warm, so I started to remove the rest of my snorkeling gear. 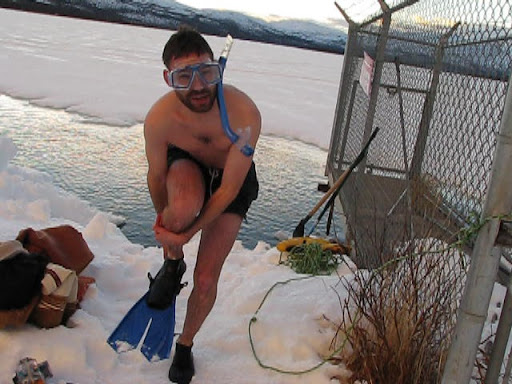 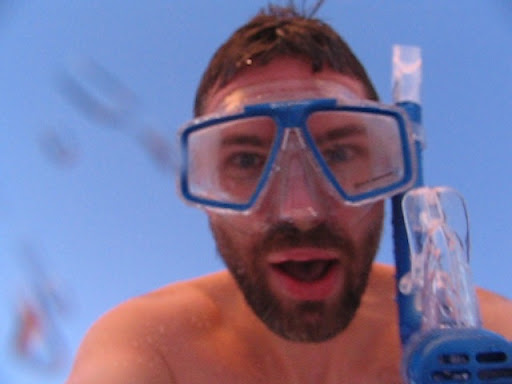 Turning off the underwater camera.

As you can see, not only am I adventurous, I'm highly intelligent, which explains why I removed my water shoes before I removed my mask and snorkel. Yes, there's nothing quite like standing barefooted on the snow. 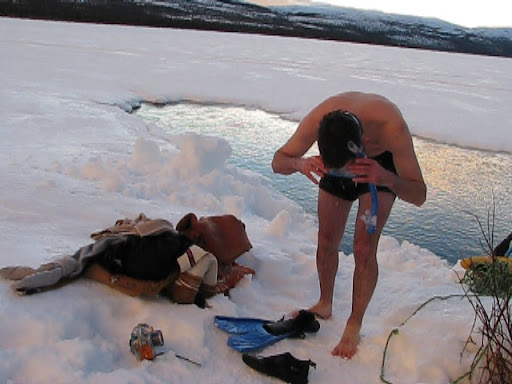 Years ago, I figured out that my underwear needs to go on before my pants, but I'm still having trouble figuring this one out.
Atlatl Mike went to retrieve my wayward fin while I told him about the swim. The breeze felt warm on my back as I toweled off. I looked around at the beautiful colours in the sky and on the mountains. I wasn't in a hurry anymore. I could relax and take it all in. It felt great. 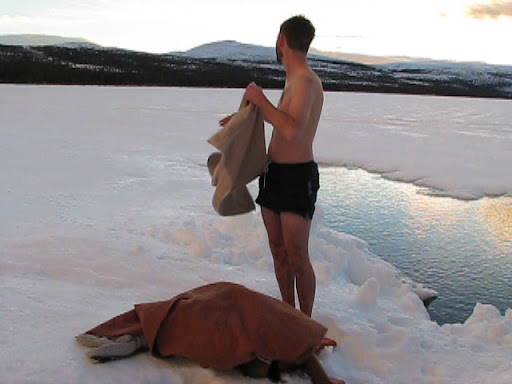 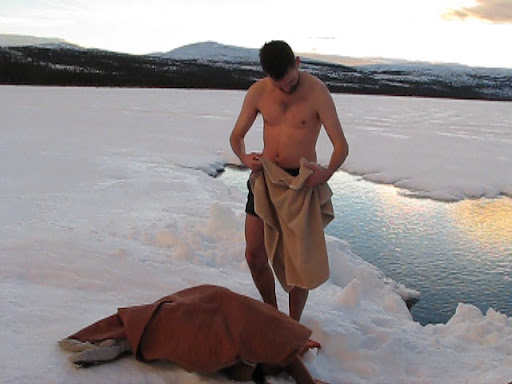 POP QUIZ: What am I doing?
a) Watching water droplets freeze to my skin?
b) Checking out how buff I am?
c) Seeing how much my nipples have shrunk?
Post Production
The first time I watched it, I was disappointed with the footage.

The underwater camera lens was covered in snow from the fall! I forgot to hold it steady in front of me! The footage is nearly impossible to watch!

It was too short! I wasn't in the water long enough! I didn't get enough footage!

Then I started editing it. You know how, sometimes, things don't go according to plan? How the "what you got" seems to pale in comparison to the "what you wanted"?

Yeah, so I didn't get the footage exactly the way I wanted. Yeah, so I tripped. Twice. It made people laugh! My pride's not so strong-tasting that I can't swallow it on occasion.

I hope you enjoyed the video as much as I enjoyed making it. If you'd like to see more, remember to watch the video here and then rate it. Maybe the next one will be filmed in Australia!

I sat for a couple hours one night watching videos on that site and yours was hands-down, EASILY the best!!! By a LONG SHOT!!!!! Great job. You are definitely crazy and got my 5 star vote!!!!

Great post - very cool to see how you made the video.

And the falling - coming from a fellow klutz - totally makes the video! :)

All the other videos are boring and you stand out because you displayed the attributes they wanted instead of said "i am this, i am that"..i watched some other videos and got bored with them...your's def stands out! great job!

I thought when you fell and kept going to the water it made you look desperate to snorkel. Like you really couldn't get enough. Then I thought about the Seinfeld episode where George has been swimming and a woman he's interested walks in on him changing out of his swimsuit and he starts yelling "the water was cold!" :)

Wild-eyed risk taker? Indisputable! None other would say "and that I was more committed to doing it than anything I've ever committed to doing in my entire life" except in an encrypted file protected by a password no shorter than 20 random characters unknown to his wife.

Michael, the only comment I have on your polar bear swim is: "Brrrrr". Good photos considering the conditions !

Your blogs provide an enjoyable view of life in our north country... keep it up. Photos of the landscape are especially enjoyable. ...Michael from Ottawa

Your video was hilarious. Like others, I've watched a multitude of those that are on the site, and yours was the only one I loved, and wanted to watch again. AND I came to search out your blog... the story behind it makes it all the better. And seriously, the falling over is what makes it. Hysterical.

Great to hear the story behind the video it made it all the more fun watching it a second time. Congratulations!

I just watched your video on canada am and I had to come give you some serious props.

Amazing!! I'm crossing my fingers for you, you crazy crazy man!!