Zombie ships in the night...

You may have read in Fawn's blog that we haven't been sharing the same bed for the past month or so. It's true. No, it's not because I did something wrong for which I have yet to be granted forgiveness. It's all because of the need for sleep.

Jade, for some reason, has turned into an insomniac. One night, she slept from 19:00 until 22:30 and then stayed up until 5:30 in the morning. Other nights have been a little better, but they always involve her waking up just as I'm trying to get some sleep. Midnight, 01:34, 02:17, 03:53 and any other time on the clock dial, it doesn't matter as long as it's a time when people should be sleeping. It can happen any time and it happens a lot. Just when I think it's safe for me to go to sleep, she'll start whining or crying or playing or whatever. Then, after I've finally get her to sleep, and with just a few hours of light sleep (from anticipating the next waking) behind me, I have to get up at 7:15 to get her medication and breakfast ready.

This has had the unfortunate effect of turning me into a zombie. It's not fun being a zombie. It's hard to walk down hallways when you're staggering from side to side uncontrollably. Instead of having an insatiable desire to consume brains though, I have an insatiable desire to sleep. I want it but I can't get it. Instead, my waking hours are spent forcing my zombie mind to focus on important tasks like working and eating and not being a cranky-pants. I can't allow myself to be distracted by little things like, oh, having conversations with my wife, because once my concentration is broken I will turn into one of those really dumb zombies that walks around and around and around in circles. 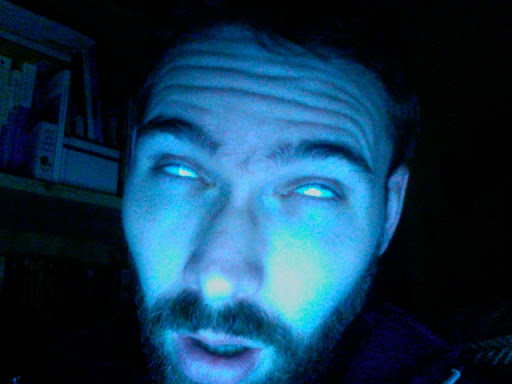 Z-z-z-zombie!  Not the best guy for making conversation, but boy can he stagger!
Two nights ago, my darling wife offered to do double-duty and take charge of both kids, hoping to cure me of my zombiness. Though I knew she would suffer, I was in too great a need for a full night's sleep to decline. In truth, I was also jealous that Fawn was getting much better sleep than I was and I wanted her to experience what my past month's-worth of nights had been like. Petty, I know.

We traded rooms and, after a long period of wakefulness (now being trained to stay up late), I slept like the dead.

And wouldn't you know it, Jade slept through the night, too.

I'm in for a long night.

ahah sorry to laugh at your lack of sleep, but I find it so funny that Jade slept through the night when Fawn was in charge!! Whenever I am home alone, Hunter wakes up at the butt crack of dawn. When Matt is home he will sleep in until 6 or sometimes even 7!!

And that picture is pretty damn creepy!

Actually, she didn't sleep right through the night. I think she would have, if SOMEBODY hadn't put cloth training pants on her instead of a diaper. And I didn't actually fall asleep between that time (5:45 and when I had to go prepare her morning medicines (7:15).

Besides, Mr-I-just-want-you-to-suffer-what-I've-suffered. *I* was the one who did almost all the nighttime parenting with Jade, so suck it up.

But I do appreciate your efforts not to be a Mr. Cranky-Pants.

Thanks, Kara. The picture is pretty representative of how I feel some nights.

Fawn, I didn't want you to suffer, I just wanted you to be able to relate better. Which is pretty selfish because you've been great about letting me try not to be a cranky-pants.

Here's a question... When Jade wakes up in the middle of the night does she have any myoclonic seizures? Naomi goes to bed about 8 sometimes wakes for an hour in the middle of the night and has absolutely no seizures during that time. Then when she wakes up again a couple hours later, she starts seizuring almost immediately. I've always wondered if it's light related. My husband and I have been in separate beds forever now! Kids with seizures need their sleep and we didn't want his alarm to wake her (her room is basically connected with ours.
When she sleeps all night, she wakes up between 4:30 and 5:30 a.m.

Jennybell, sometimes she does but most of the time I can't detect any seizures. When she's moody and emotional, it's usually seizure-related or because she needs to go to the bathroom (or have her diaper changed). The rest of the time, though, she's just WIRED and all she wants to do is play.