The Cure for Cabin Fever

Way back when, in my high school days, I used to get this cooped-up feeling where every fibre of my being just wanted to be outside. One spring, in a math class out in the school's portable-farm, I just had to sit near the open door or I wouldn't have been able to learn anything. My teacher was an understanding soul and she let me step outside once-in-a-while to take in some of the fresher air.

I didn't realize it at the time, but I had cabin fever.

With Halia's birth and everything we've been through with Jade's epilepsy, I didn't notice it creeping up on me over the past couple of months, either. I was becoming unbearably ornery.

Finally, I figured it out. I let Fawn know that I needed to get out and do some exploring. She was more than happy to grant her blessing.

We've had a pretty cushy winter thus far, and today was no exception. There's a bit of snow on the ground, but not enough for any real snowshoeing. Cross-country skiing was an option, as was hiking, but with my neighbour's dog, Kodiak, available, I decided that some kicksledding was in order.

With the temperature hovering around 0oC, we struck out for the Ibex Valley. I chose Ibex Mountain via the Scout Lake Road as our destination, though I knew it was unlikely we'd cover 40 to 50kms needed to make a round-trip from where I would park the car.

I parked the car on the side of the road, a couple of kilometers past the turnoff for the Ibex Valley bouldering area. I attached my pack to the kicksled, harness Kodiak and Nanuq, and we set off down the nicely packed road.

They were eager to run and it wasn't long before we were near the "Cabin of the Naked Man" (which sounds like a reject title for a Hardy Boys mystery...) and the turnoff for the trail that would take us further up the Ibex River Valley, toward Ibex Mountain.

Once we were off the road and on the trail, the going got tough. The snow wasn't deep, but the little runners on the kicksled did not like plowing through the grainy snow. I was surprised that Whitehorse's legions of snow machine riders hadn't packed the trail. Other than some old canine, moose, and mouse tracks, the trail seemed untouched. The dogs, to their credit, pulled determinedly while I pushed the sled and jogged along behind. 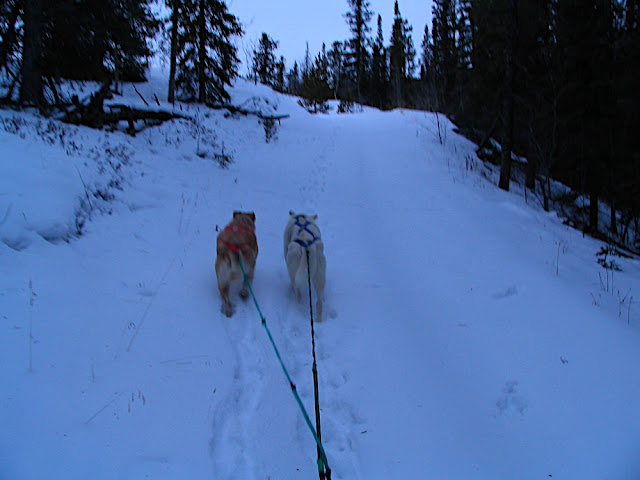 Nanuq (L) and Kodiak (R) pull uphill.
There was a bit of up and down at the start of the trail before it leveled out. 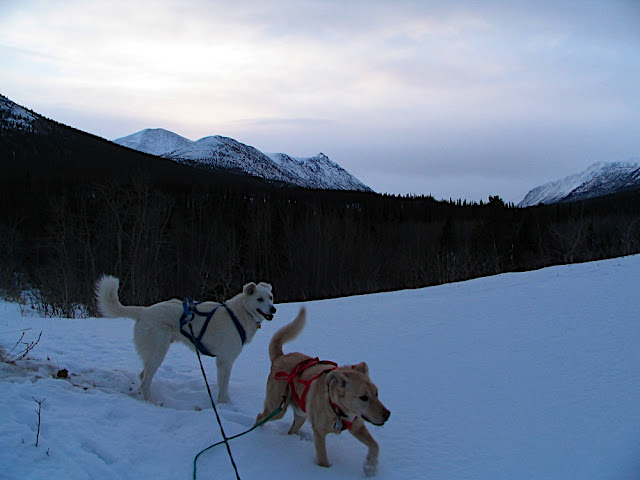 Taking a quick break at the top of a rise.
It was warm out and the dogs were getting hot. So was I. I had shed my hat, mitts and sweater. I was down to a long-sleeved t-shirt with a short-sleeved t-shirt over that. Even when stopped, it was comfortably warm. 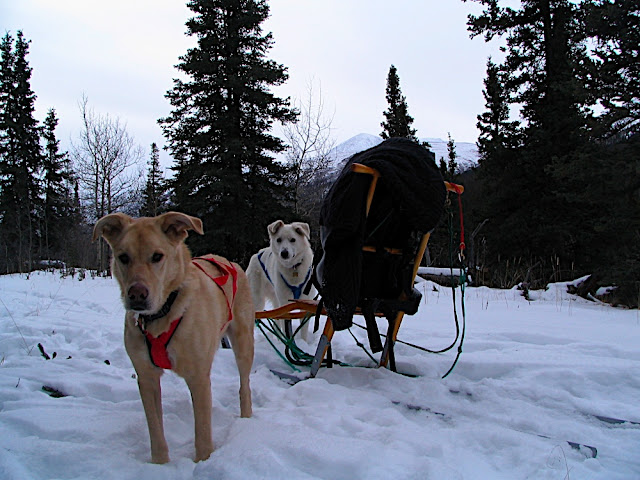 Stopping for a tea and snack break. 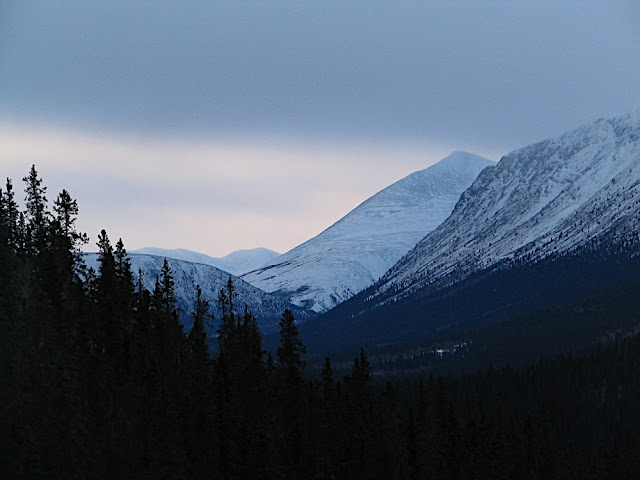 Looking up the Ibex Valley.
We'd only gone a couple of kilometers down the trail but I knew that going any further could exhaust us on the return trip. Instead, we enjoyed a little snack and I decided to do some hiking. A trail cut up a south-facing slope and I figured, rightly, that the view of the valley would be good further up. 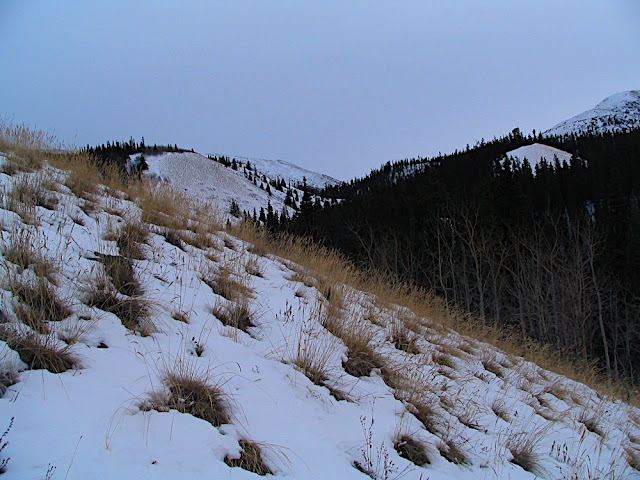 Walking up a south-facing slope. 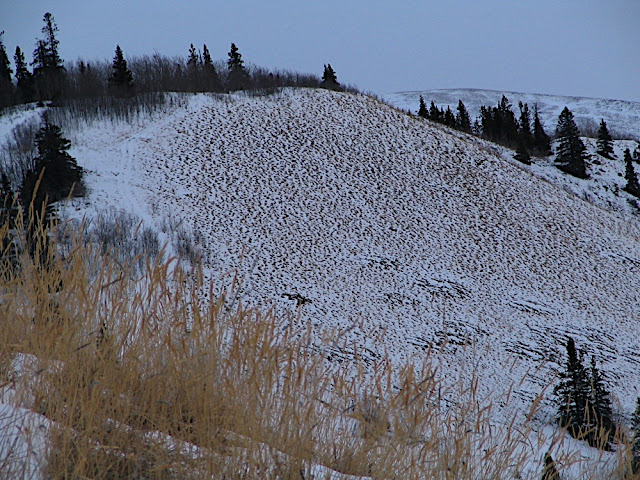 Further up the south-facing slope. 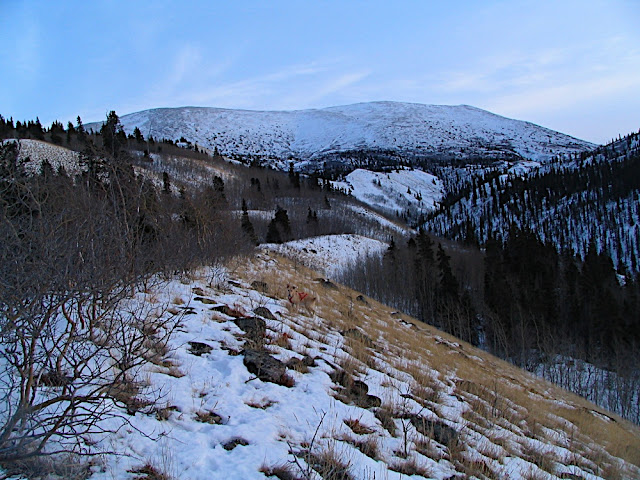 Still further up the south-facing slope. Kodiak and Nanuq are camoflauged by the snow and grass.
There wasn't much sunshine to speak of. Although the sky seemed clear in most directions, the sun was continually shrouded by a system of low-lying clouds. 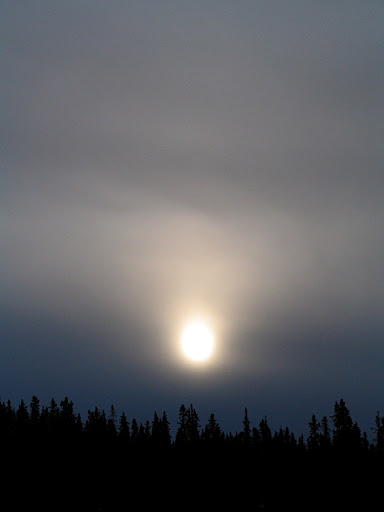 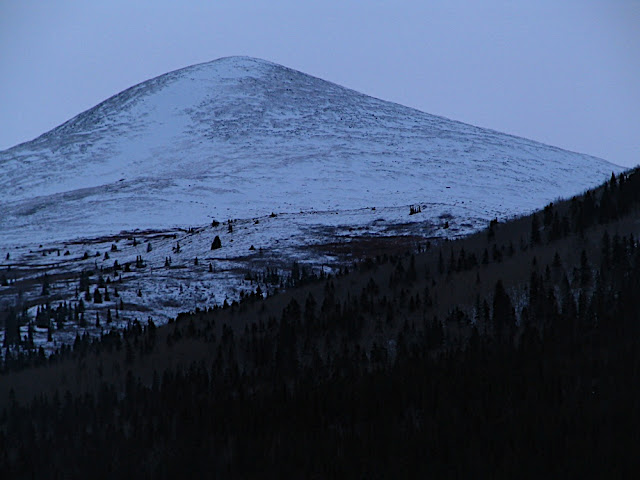 Looking across the valley, behind Mount Ingram. 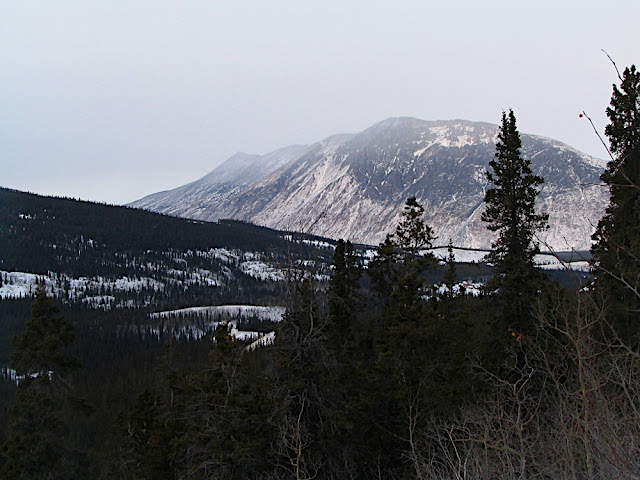 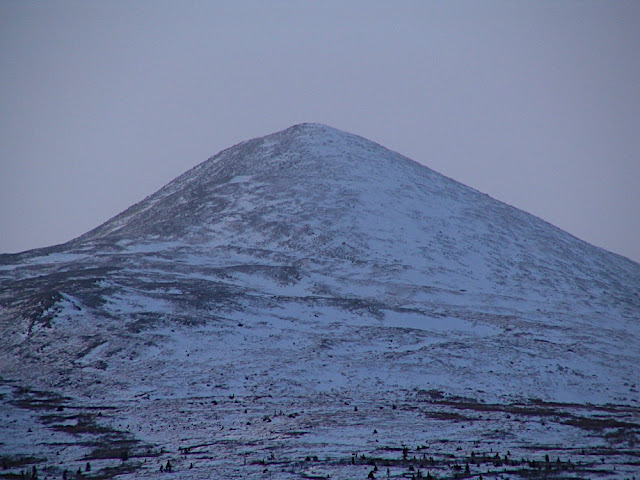 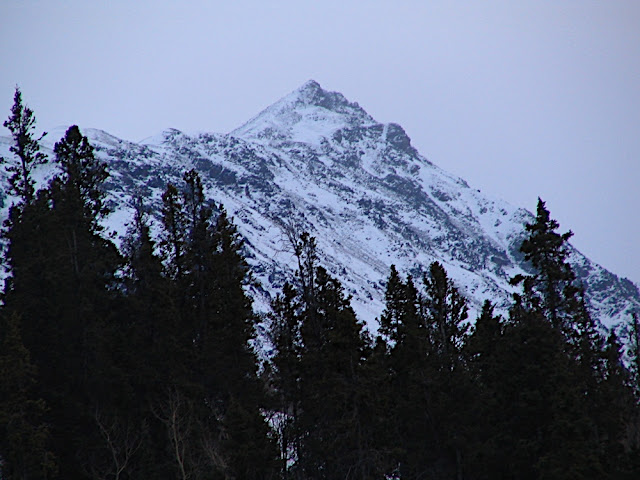 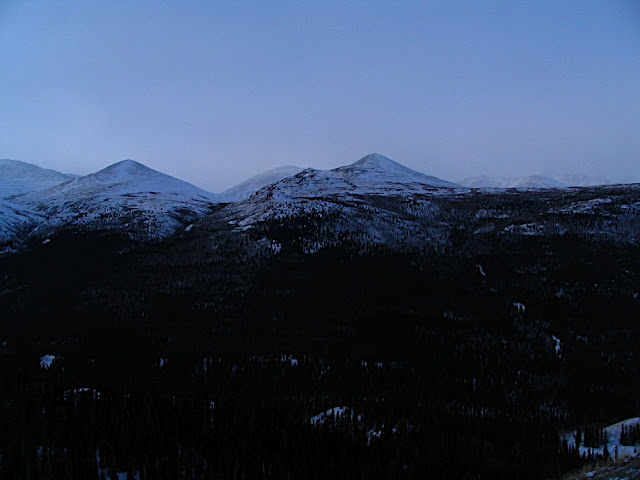 Looking across the valley. 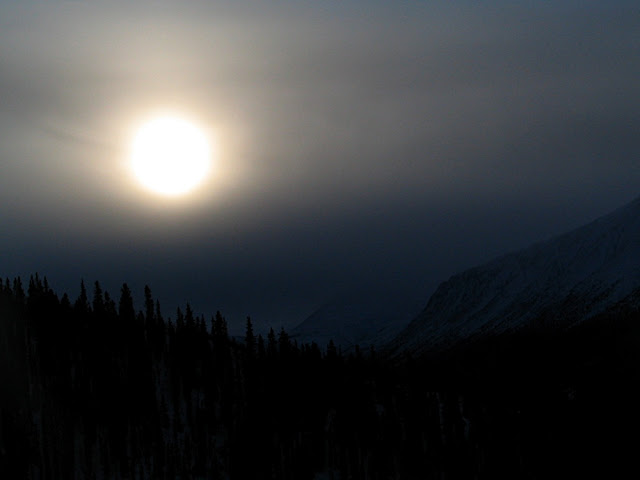 More of the mid-afternoon sun. 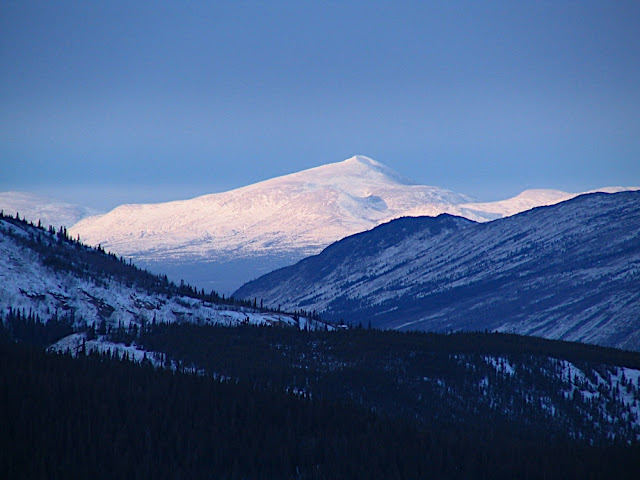 Sunlight on the mountains way across the Takhini River Valley. 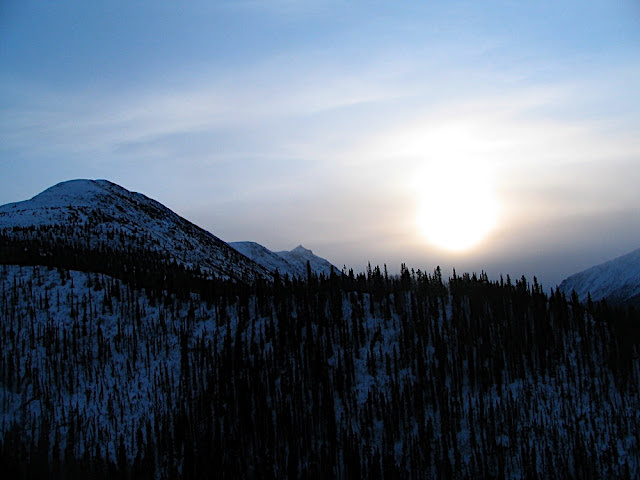 The skies begin to clear. 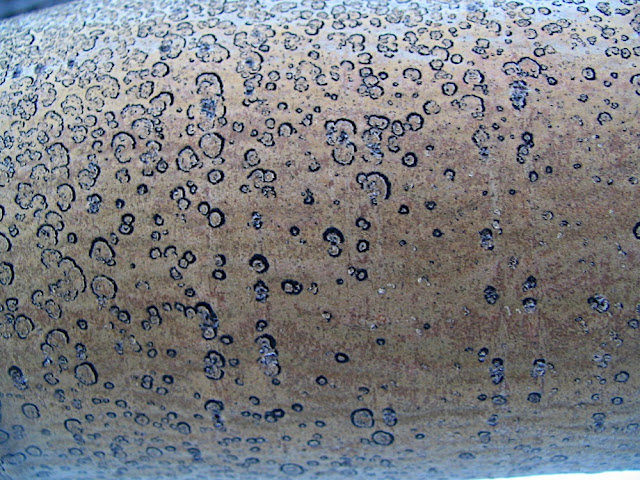 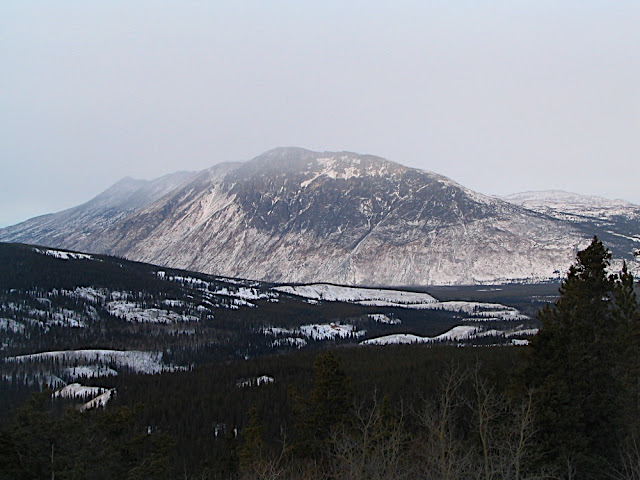 Ibex Ridge. Ah, it was such a great hike. 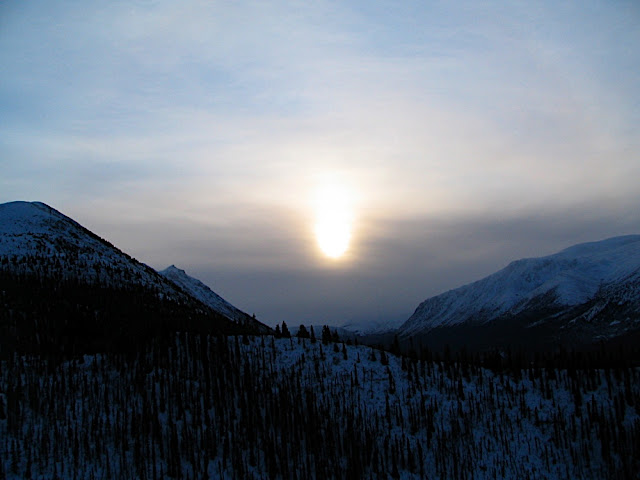 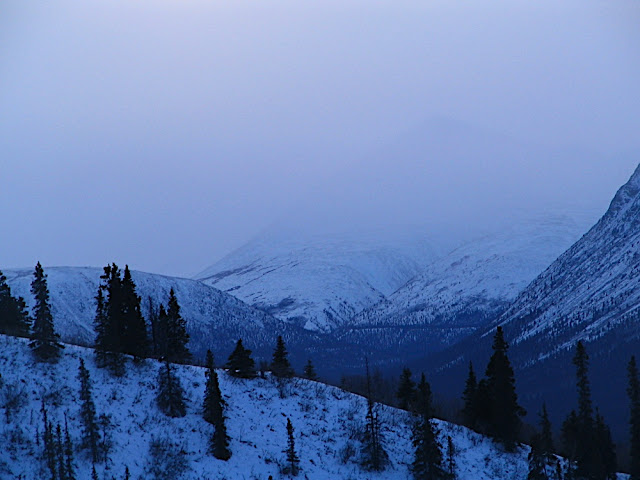 Going back down into the valley was much faster than it was going up. The sound of trickling water was loud where I left the kicksled and I assumed it was the Ibex River. I went to investigate, but found it was only a little creek running out of the side valley I'd just hiked up. Well, we weren't going to get across that without getting our paws wet, so we turned around and made our way back to the car. 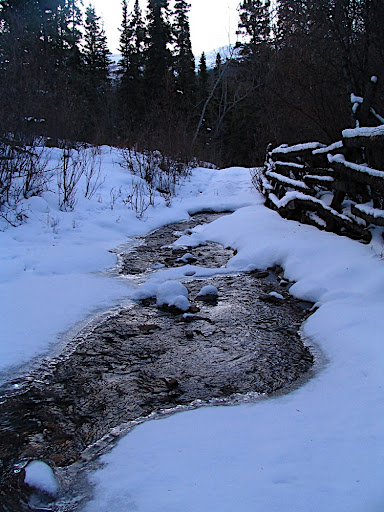 A creek runs over the trail.
It was slightly easier going out than it was going in. For one thing, the trail had been somewhat broken. For another, it was mostly downhill. When we got back on the road, the dogs started pulling like they hadn't worked all day. I started to wonder if we shouldn't have found a way across that creek and kept going up the valley. 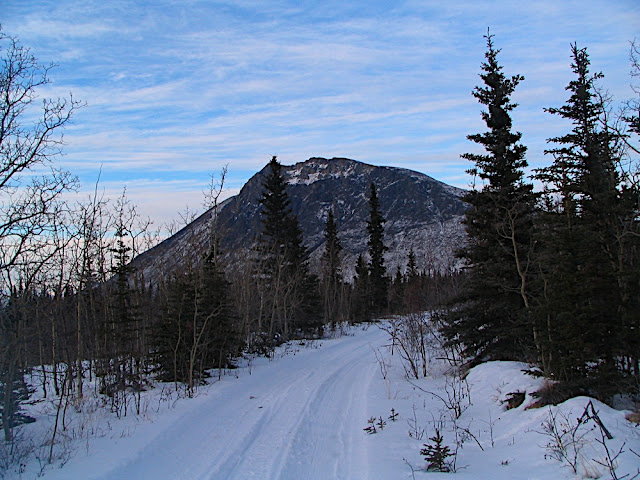 Ibex Ridge from the road. 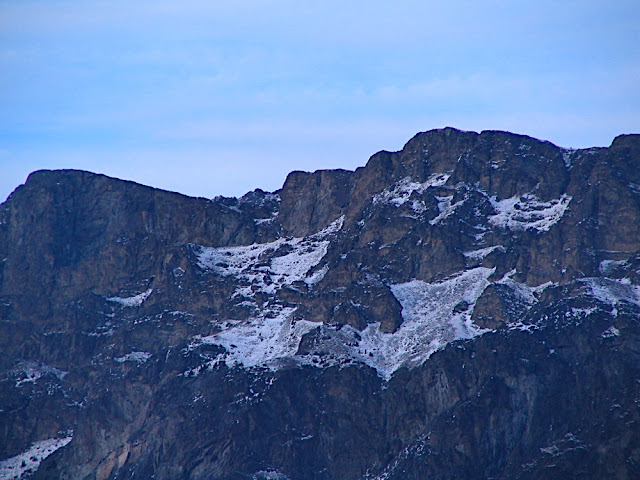 Ibex Ridge.
Oh, and my cabin fever? It has been taken care of for now. When cabin fever strikes, there's really only one cure: Get outside and go somewhere!

I was starting to miss your meandering blogs. Thanks for the virtual Ibex adventure! I'm too pregnant these days to go more than 100 meters in the bush so it's a treat to see those beautiful Yukon wintery vistas.

Hopefully there will be more to come in the near future because, after December they might be few and far between...