There are new friends, old friend and oooooold friends.

Oooooold friends are the ones who can seemingly read your mind. They're the ones with whom you can pick up right where you left off, as though you last talked minutes ago, even though you haven't seen each other for years.

Garrett is one of those.

By some great stroke of luck, Garrett came to Whitehorse for some contract work. He scheduled a little extra time to visit, which I was very happy with. 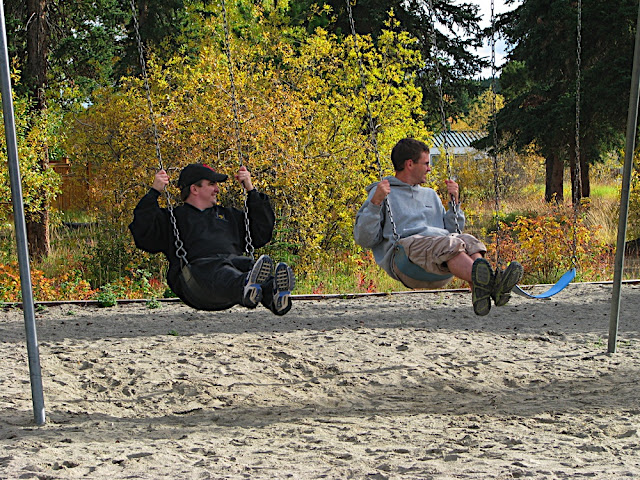 Picking up where we left off.
The last time Garrett saw Jade, she was tiny. Perhaps Jade remembered him, because she took to him right away. She especially liked the way he said "Miiiiickey Mouuuuse" in a weird, annoying voice. It drove everyone else crazy, but Jade loved it. It drove me so nuts that, if it had been anyone else, I would have kicked them out of the house or called the men in white coats. Remembering how much of my own annoying behaviour he's put up with over the years, I didn't say anything. Now, every once in a while, Jade says "Miiiiiickey Mouuuse" too.

I should have nipped that one in the bud. 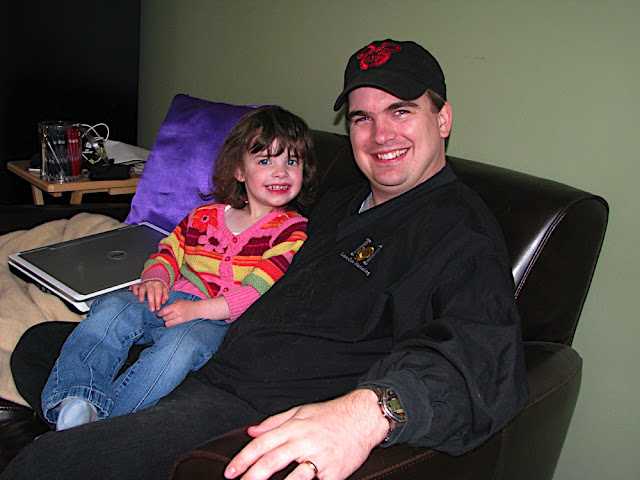 Jade takes to Garrett right away.
We took a little trip to the Beringia Centre, which was more about showing Garrett how to atlatl than to see the giant beasts. I mean, who wants to see giant beats when you can throw things at giant beasts? Maybe that's why they went extinct... 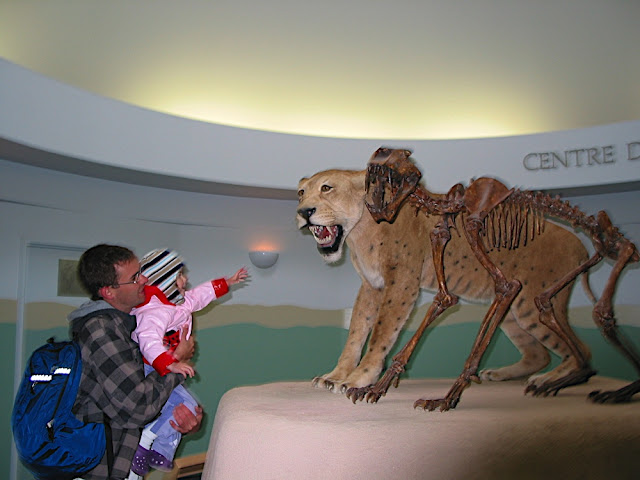 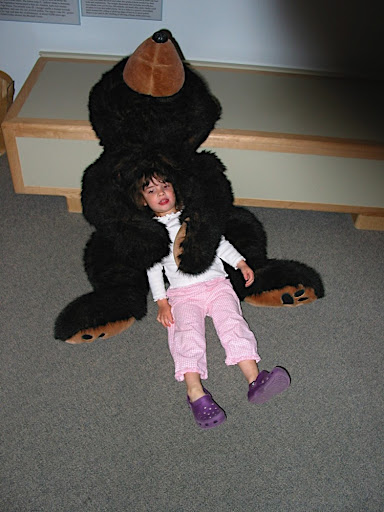 How many poor, defenseless children has this bear mauled? 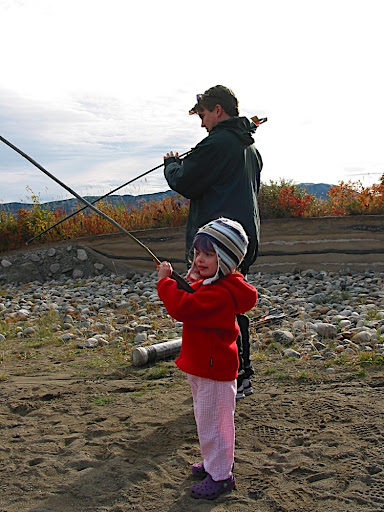 Learning how to atlatl. 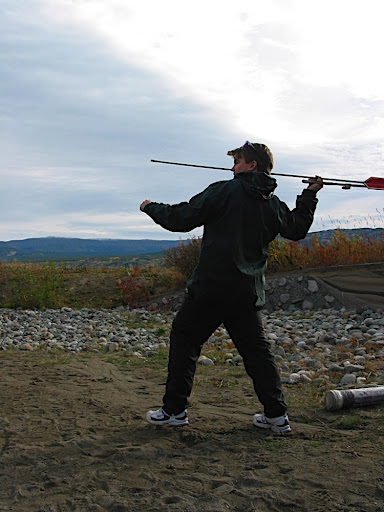 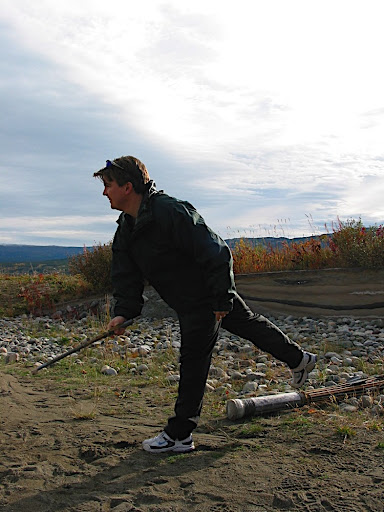 Bulls-eye-ish!
One evening, we decided to go to the Takhini Hotsprings. We grabbed our bathing suits and hopped into the car. 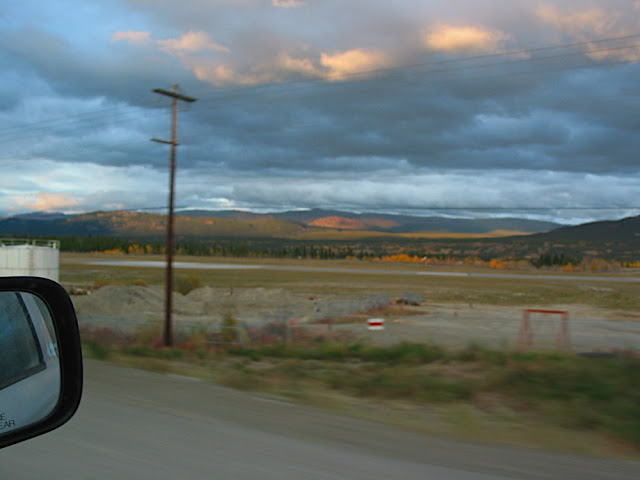 Driving to the Takhini Hotsprings. I like this picture that Garrett took of the fall colours whizzing by. It may be blurry, but it's colourful.
When we got there, we discovered that the hotsprings were closed for more renovations. Fortunately, we were still able to relax in the hot, soothing water. When the springs are closed, the water is diverted into what my brother calls "The Hippy Pool". It may not be big, but it's hot and relaxing. 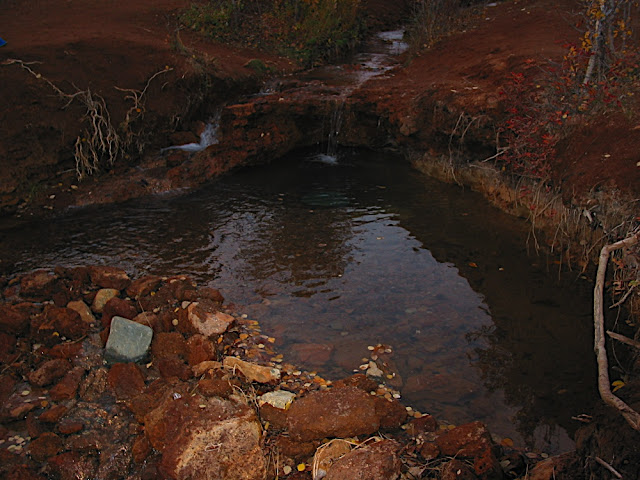 The "Hippy Pool".
Looking for a little more adventure, we were planning on going for a hike. Instead, we decided to go for a paddle. We were going to go hiking, but Fawn needed a break (and to get some household tasks done) and Jade needed her sleep, so the canoe was our next best option since she usually sleeps well in the canoe.

We put in near the Yukon River bridge at Marsh Lake and paddled down. 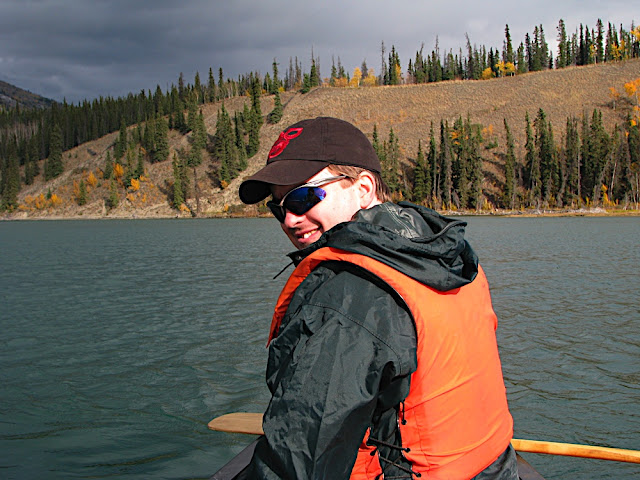 On the Yukon River.
I found a good kid-sized paddle for Jade and inaugerated it on this trip. She didn't paddle so much as place the blade in the river so the water could skim over top of the blade in an arch. She was very happy with the "plashing", as she called it. Maybe next year she'll figure out the whole paddling thing. 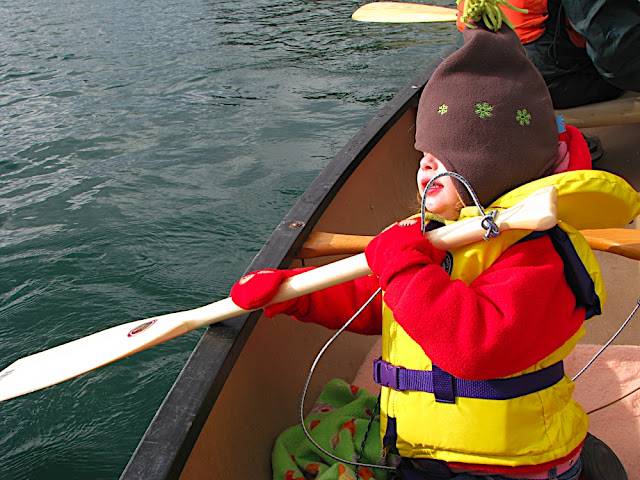 Jade helps by "plashing".
Fortunately, we weren't long into the trip before Jade fell asleep. She needed it. 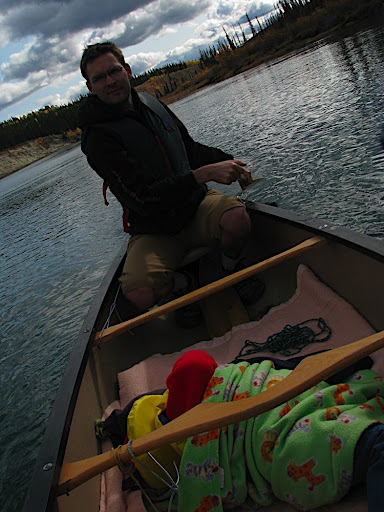 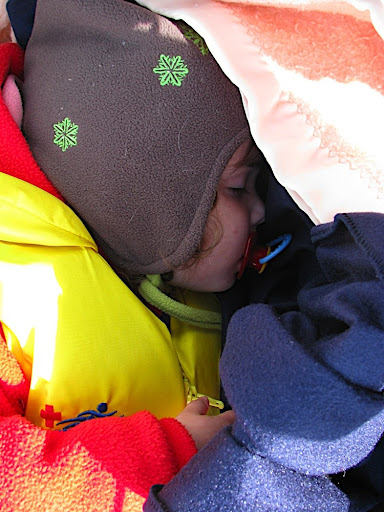 Zzz...suck suck suck...zzz...suck suck suck...zzz...
When she wasn't sleeping, Jade was having lots of little seizures and it was frustrating me because I hate to see her be affected like that. The seizures made her moody and whiny, which frustrated me even more. When I go paddling, it's because I like to get away from the things that cause frustration - the thought of which made me even more frustrated. After Jade fell asleep, I relaxed. When she woke up, the seizures began anew, which frustrated me even more. It was not a relaxing trip for me, in spite of the beauty of the fall colours and the mountains and the clay cut-banks. 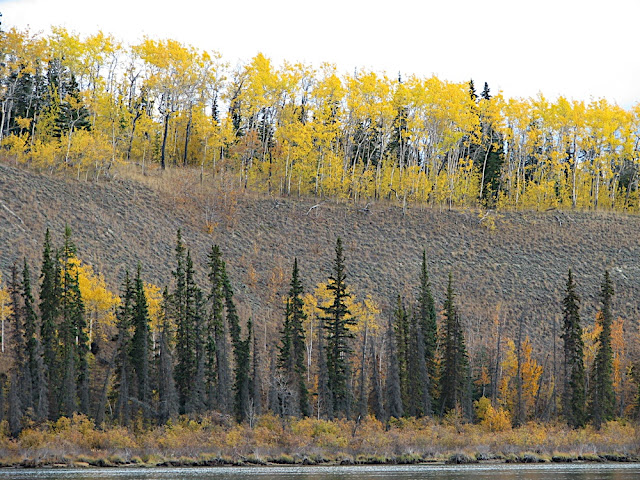 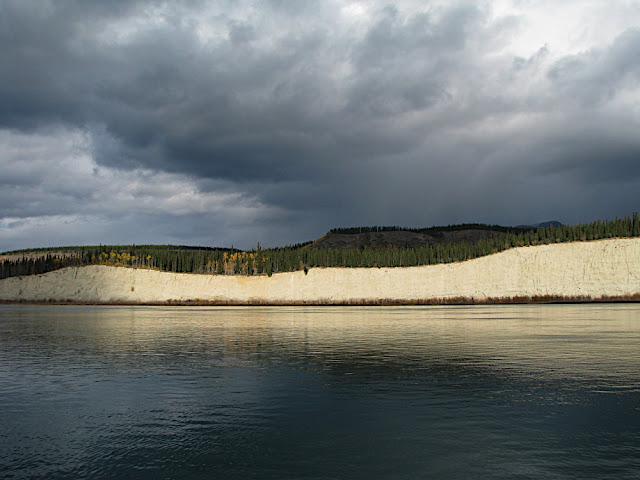 "It's gonna be a briiiiight, bright, sunshine on clay." 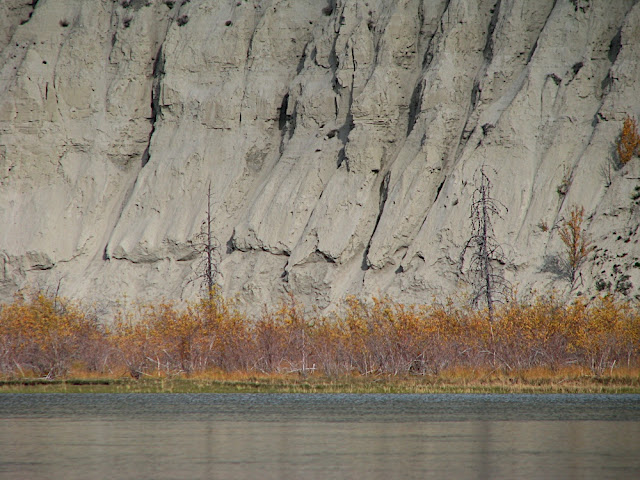 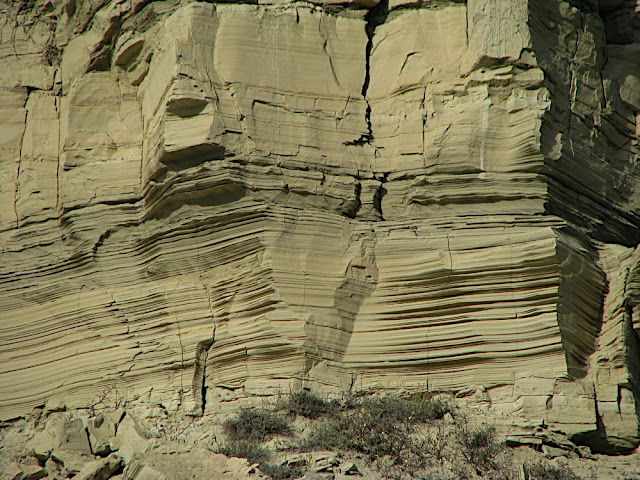 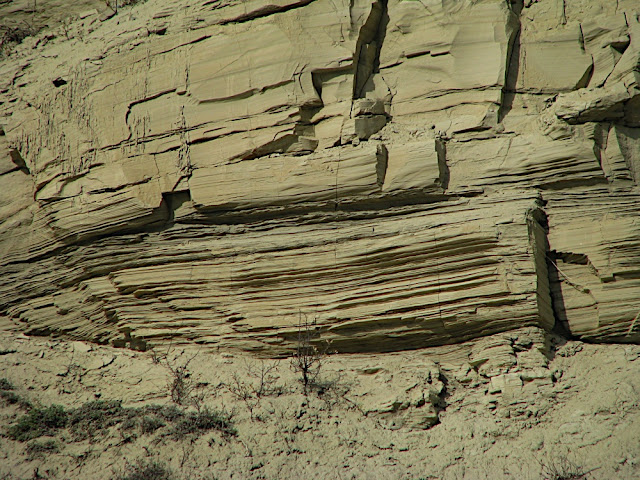 A clay cliff has many layers. 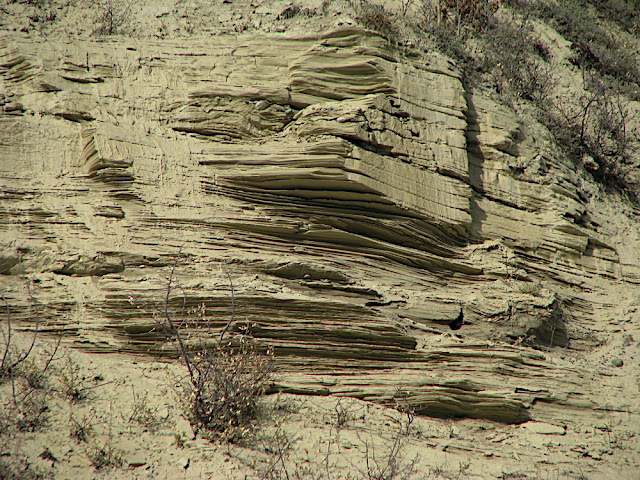 Would we be able to determine the age of this clay by counting the layers?
The clouds moved in over the course of the afternoon. When it was sunny, it was hot and I wanted to shed layers. When the clouds moved in front of the sun, it was suddenly very chilly and I had to bundle up. I marveled at how much of a difference one cloud could make. East of Grey Mountain, it looked like the clouds were shedding snow. 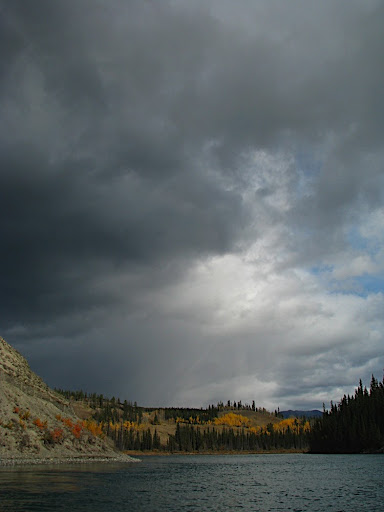 Clouds moving in and moving out again 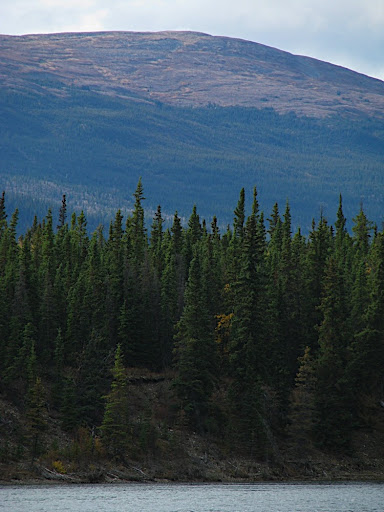 Golden Horn from the Yukon River. 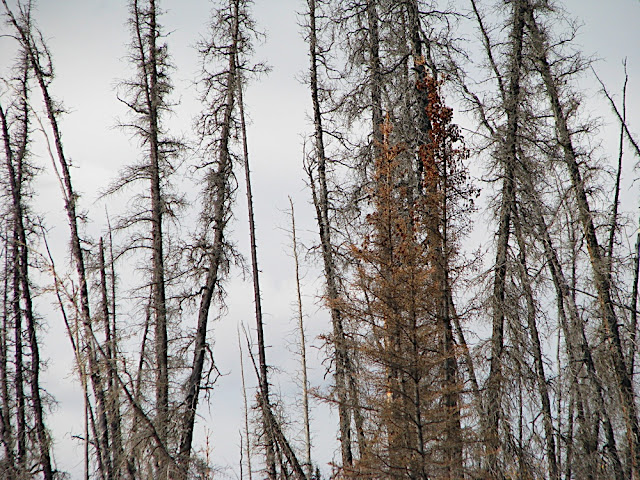 Trees that have seen better days. 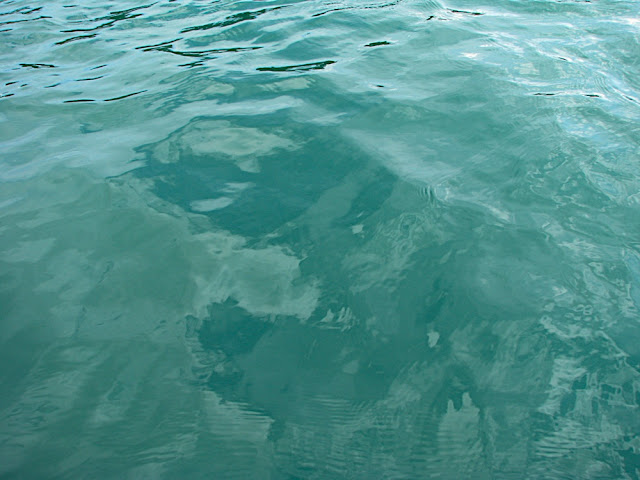 Yukon River blue. They should make crayons in this colour.
As I understand it (and I could be wrong), Grey Mountain's "proper" name is "Canyon Mountain". As the story goes, Canyon Mountain was the landmark that signified the approach of Miles Canyon. From on the river, you can see the mountain from far away. The mountain gets bigger and bigger as the canyon gets closer. While it doesn't mark the exact location of the canyon, it does a pretty good job in the grand scheme of things. 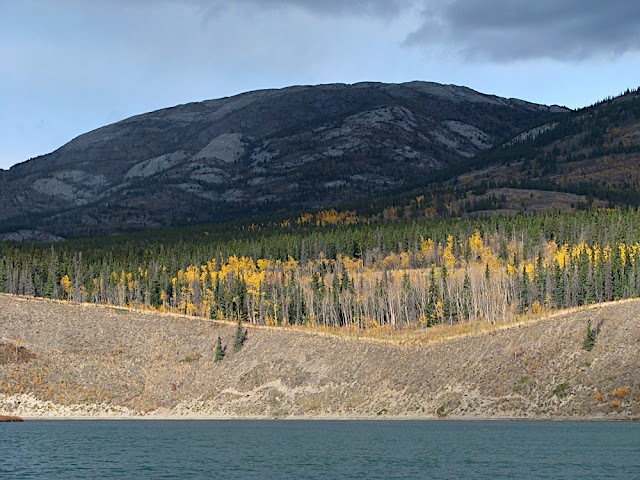 Grey Mountain (Canyon Mountain) as seen from the Yukon River.
The colours seem more vibrant and longer lasting this year. I'm not sure why that is. Is it from milder evenings? Is it because they started so early this year? Regardless of the reason, this is the real Yukon gold. 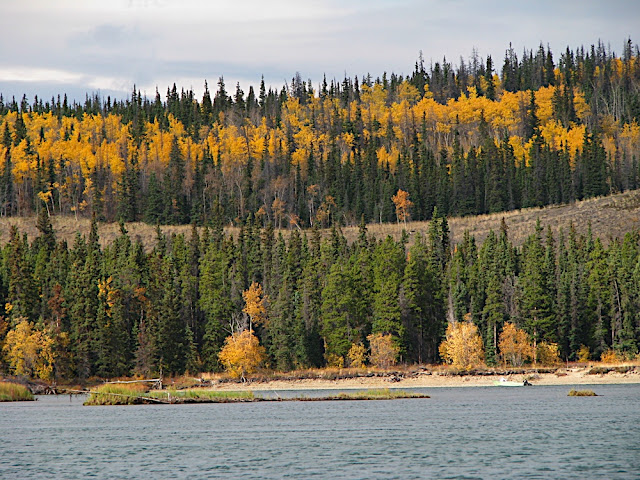 Yukon gold.
We stopped at McRae Landing for a snack and called Fawn to meet us at Schwatka Lake with the car after our paddle through Miles Canyon.

Miles Canyon was milder than I've ever seen it. From on the edge of the canyon, people halloooed us and took pictures as we paddled through. Jade's been though before and, seemingly unintersted with the basalt walls streaming by, she sat calmly, pointing back at the people who were doing their best to get us to smile and wave for their pictures.

Fawn picked us up at Schwatka Lake and fueled us up with some fresh-made hot chocolate. It was a sweet thing to do and a great way to end an afternoon of hot and cold paddling. 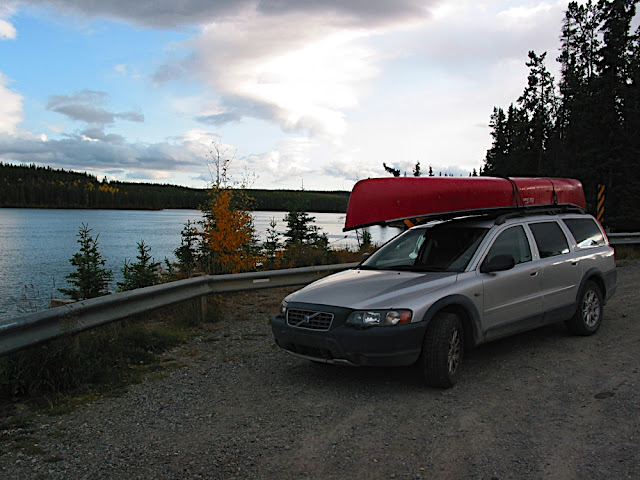 Schwatka Lake
Garrett had to leave early the next morning. It's always great when friends come to visit, and it's never great when they have to go. Fortunately, he should be back in the springtime.

I think he should just move here.

The reason you'd like Garrett to move here has absolutely NOTHING at all to do with the fact that he was practically Jade's nanny while he was here. ;) Jade sure loved him!

Oh, did I forget to mention that?

thanks guys...it was fun...I loved being outdoors.
Jade's such a cute one...and well behaved.
We'll I'll definitely be back. either in the spring or earlier....we'll see...
Loved seeing you guys again..
Mike's comments about good friends picking where they left off is sooooooo true.
Take care of yourselves guys!

Looks like a fun time! I want to try that atlatl! We haven't been to the Beringia centre yet, hopefully soon!

And you are a smart dad- I see you even tied the little paddle to the canoe!

You know it, but to her credit she didn't drop it once. At least, I don't remember her dropping it...

Oh no, that darned Bear was supposed to be caged up in the basement! Someone must have forgotten to lock the gate to the downstairs. Glad Jade made it out of the Centre ok!

Hmmm, Stacie...I wonder if your "in" would think about hosting an urbanyukon meetup!?

Michael - thanks for all the wonderful pictures. I really miss the Northern fall colours now that I live down in Victoria... GOT to get back up north soon!
(And perhaps it was better for Jade to be seizuring outside, in the fresh beautiful air, than in a horrid institutional space... I feel for all three of you and hope things improve soon!)