Not too long ago, Joseph, a friend I originally met in Fort Simpson, who is now living in Whitehorse, gave me a call. He asked me if I'd like to join his stick gambling team for the 21st Annual Yukon Stick Gambling Competition held at Twin Lakes, north of Watson Lake, near Junction 37.

Now, I realise that, if live anywhere but the north, you're probably thinking, "What the heck is stick gambling?" so I shall explain. But first, a little bit about Twin Lakes and some pictures from the area...

Twin Lakes (not to be confused by a place of the same name north of Whitehorse) is a pretty spot where an access road and some campsites have recently been made.  The entrance is mostly unmarked, so you likely won't find it unless someone shows you where it is. 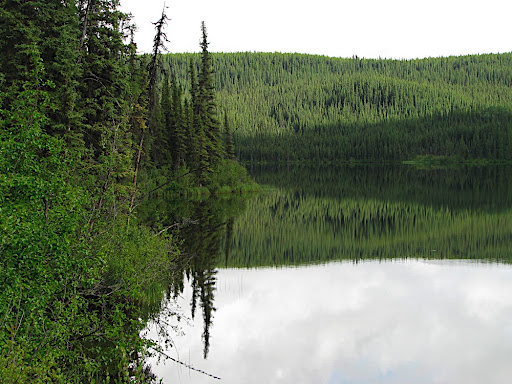 Reflection on one of the Twin Lakes (they weren't identical twins). 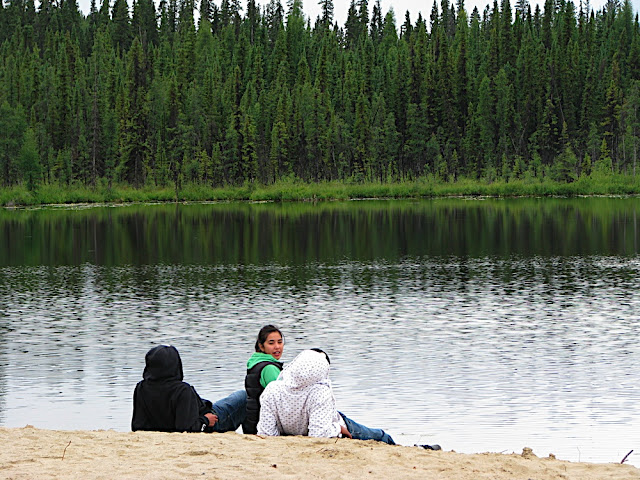 The other, smaller, lake. 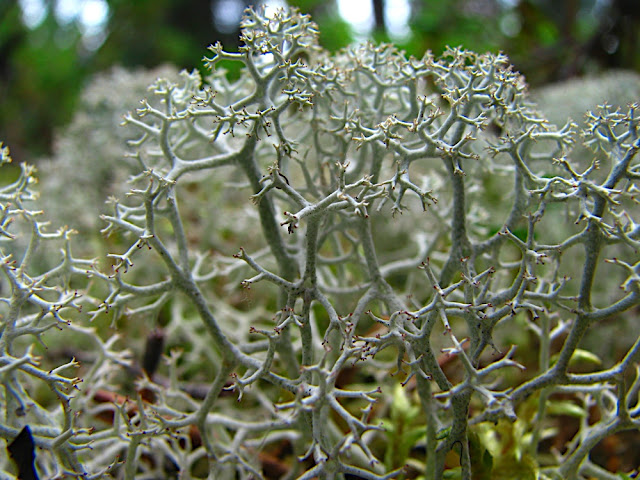 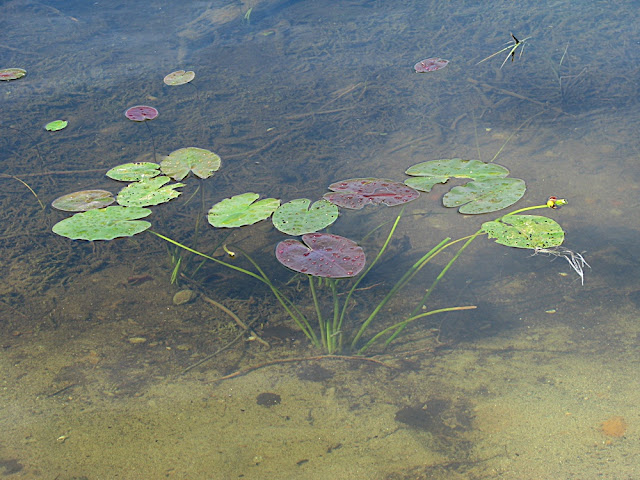 Pond lilies in a clear lake. 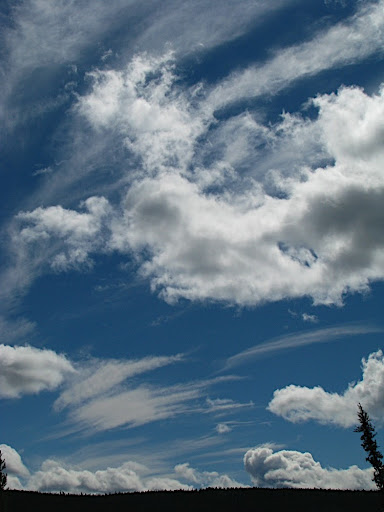 Wispy sky.
An Attempt to Explain Stick Gambling/Hand Games
Stick gambling, also known as "hand games" in some places, is a First Nations game of luck and skill. It's hard to explain, so please bear with me while I try.

Two teams face each other in parallel lines. Teams can be as small as four but they can be much, much larger (there are old stories of teams with more than sixteen people per team). Every player has a token that they use to hide in either their left or right hand. 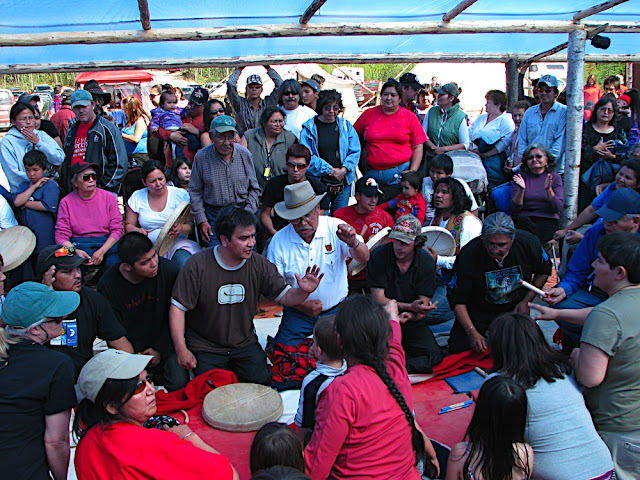 Two teams face each other. 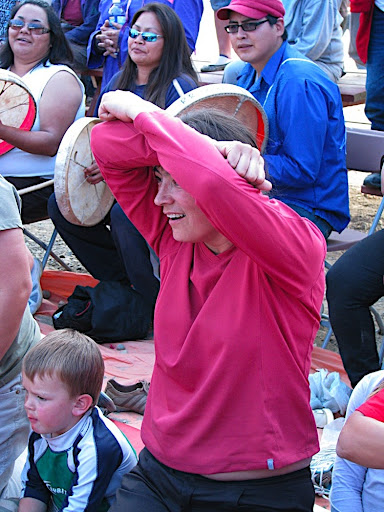 The players on one side hide their tokens. 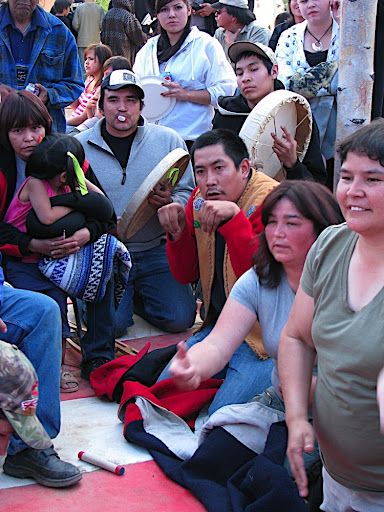 Hiding a token squirrel-style.
One team hides their tokens while a "shooter" (or "caller" or "captain") from the opposing team uses special hand signals to indicate which hands he thinks his opponents are using to hide their tokens. With an array of different signals at his disposal, the shooter can guess any combination of hidden tokens.  The shooter guesses all of his opponents at once. 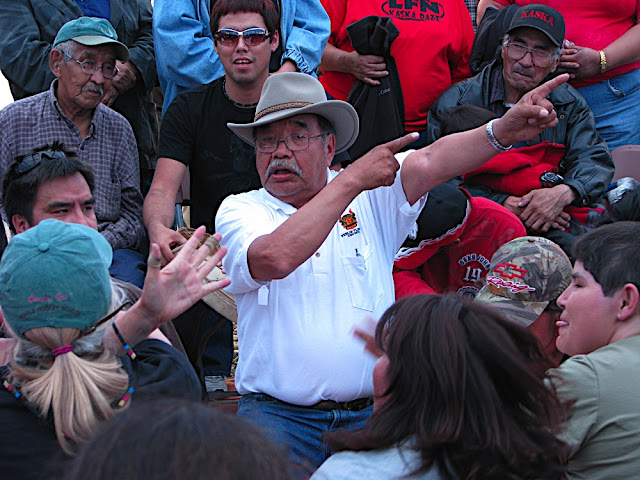 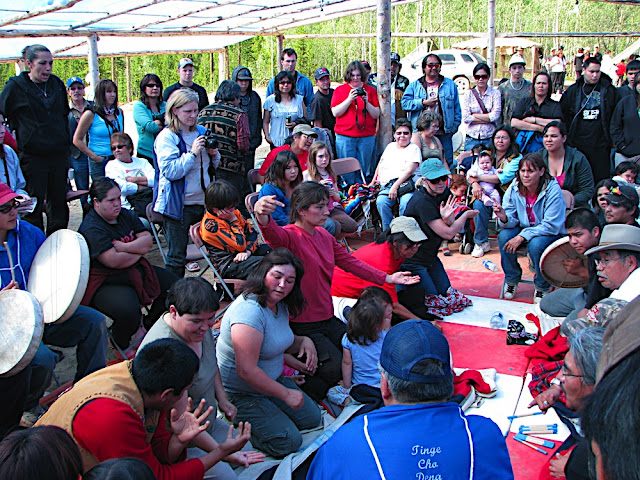 The players reveal where they were hiding their tokens.
Oh, did I forget to mention the sticks?

Win all the sticks and you've won the game.

Back to the shooter. When a shooter has guessed, the people that he didn't guess correctly get to hide their tokens again, and so it goes until he has guessed them all. Then, it's the shooter's team's turn to hide their tokens so the other team can guess. This goes on until one of the teams has won all the sticks. Games are usually best two out of three, but that's not always necessarily the case and depends on the tournament rules. 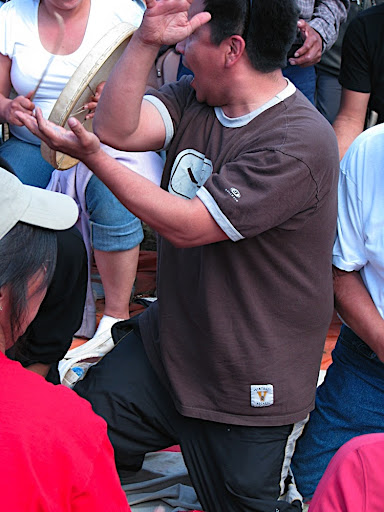 A token is revealed with a flourish.  The crowd really likes good showmanship.
Amidst all the hiding and guessing and stick passing is a whole lot of gestures designed to confuse or fool the shooter or influence the hiders. Add in a steady beat from a line of hand drums and a bit of chanting and you've got a pulse-pounding, chaotic, and totally entertaining game. 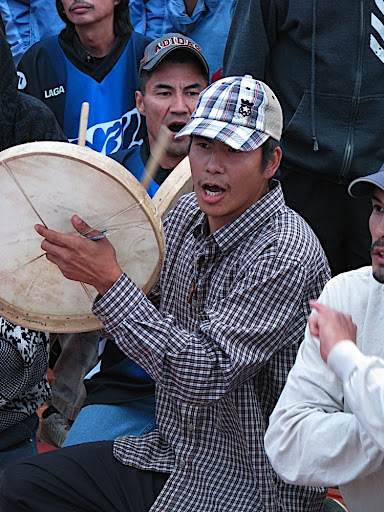 Drumming adds an element of excitement to the game.
But where does the gambling come in, you ask? It's called stick gambling, after all. In the old days, players would compete for dog teams, tools, shells, matches, and anything else of value. Some people say that they used to compete for wives, but this statement is usually accompanied by a chuckle. Today, there are friendly free games and there are competitive games with an entry fee and big prizes. 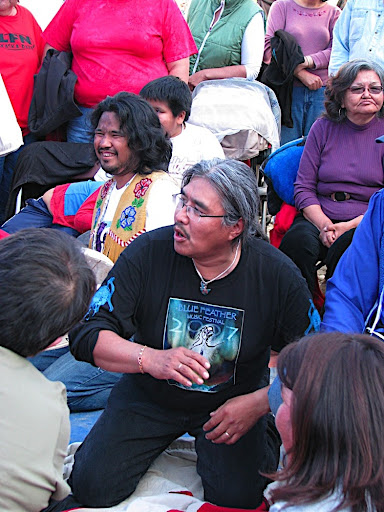 With the drums and the cheering crowd, it's easy to get right into it.
I'll end this explanation by saying that, if you try to learn how to play hand games just by watching, or even through this attempt at an explanation, you won't. You've got to play and be in the thick of things to make any sense of it, otherwise it's just too much to take in.


The Tournament
I learned how to play hand games when I lived in Fort Liard, which is something that Joseph knew, which is why he asked if I'd be on his team.

There were thirty-four adult teams and over twenty youth teams at the event. The teams had six players each. It was $600 for each team to enter, which also covered all of the meals at the event. The event was double-elimination and the first prize for the adults was $10,000. (First prize at the tournament in Tulita is $50,000!)

Out team was called "Wolf Pack". Although most of my teammates are now living in the Yukon, our team had players from all over the place: Watson Lake, YK, Tulita, NT, Wrigley, NT and Meander River, AB - and wherever the heck I'm supposed to be from. Most of the other teams were from one community or another in the Yukon.

Our first game went poorly and I was guessed on nearly every call, which was either luck or skill on the shooter's part. Our second game was much, much better and we ended up winning because the shooter just couldn't figure out which hand I was using to hide my token. I felt great after that game. Our third game of the day went well but, unfortunately, did not go well enough and we were eliminated. With thirty-four teams entered into the event, it had to happen to someone.  Late on Sunday, the event was won by the Kaska Nova team from Ross River.

Still, I had a great time and look forward to bringing my family and participating again next year when the event is held the Champagne-Aishihik or Kluane area. I especially look forward to playing again in August at the Petitot Gathering, which is being held from the 6th to the 10th beside the Petitot River bridge, 35km south of Fort Liard, NT. If you're in the area and want to see what it's all about (and even try your hand at it), drop by!

I'll end this entry with some pictures, and will post some video when youtube starts behaving.  Enjoy! 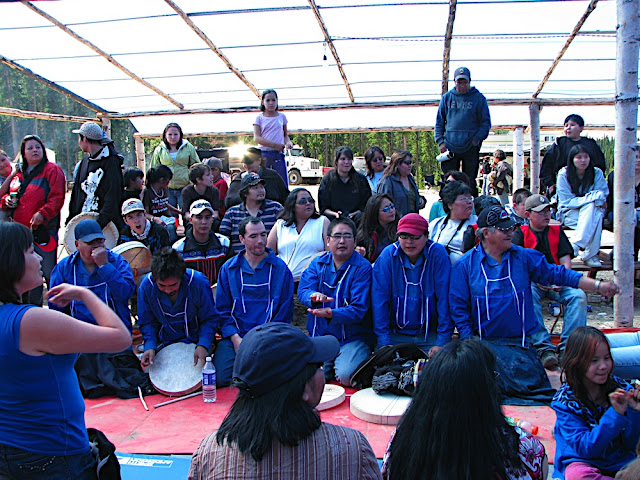 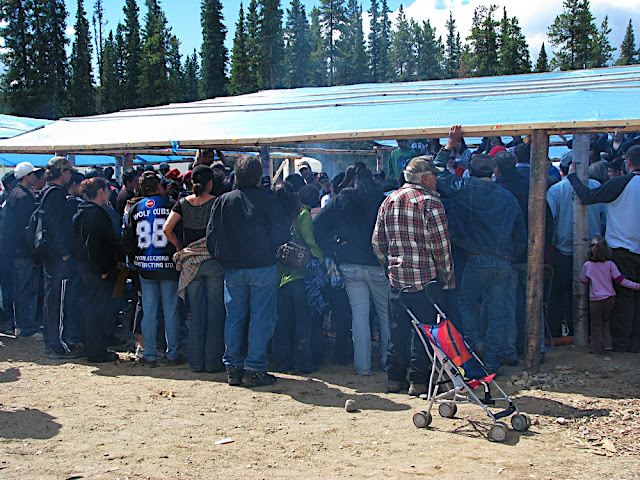 The crowd packs itself in to watch a match in progress. 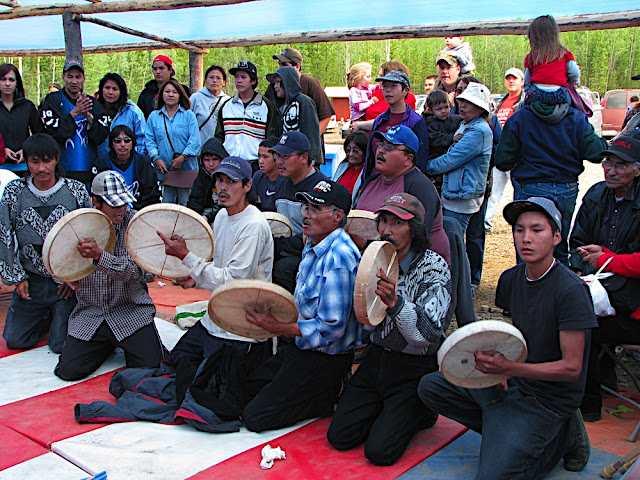 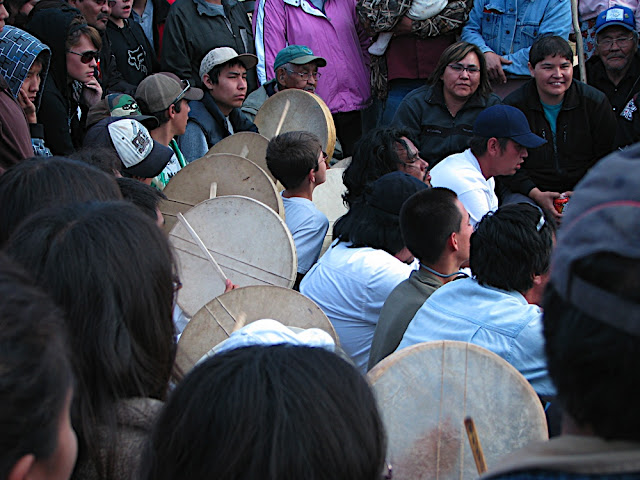 A row of drums pounds out a deafening beat. 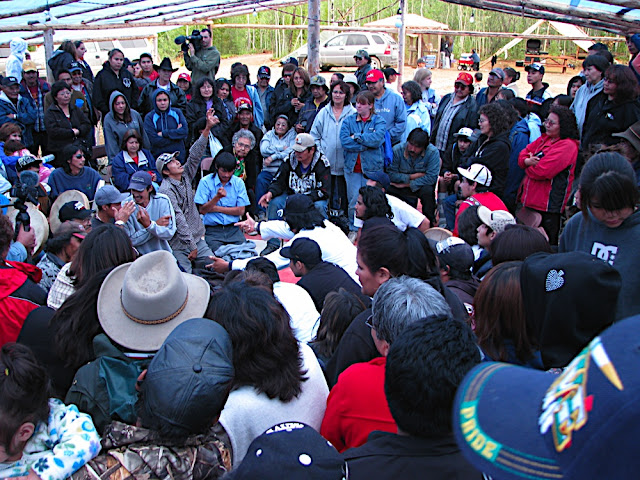 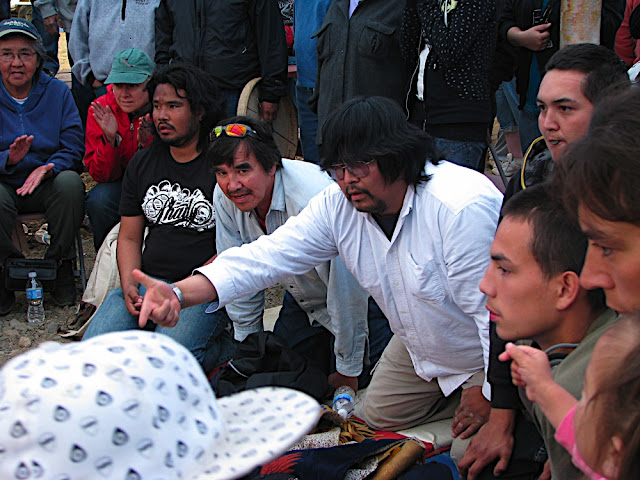 The Kaska Thunder makes a call. 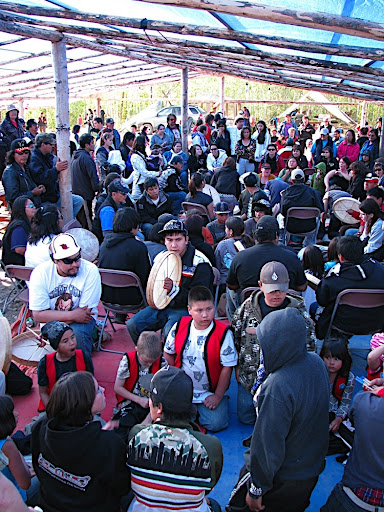 Youth and adults were all involved. 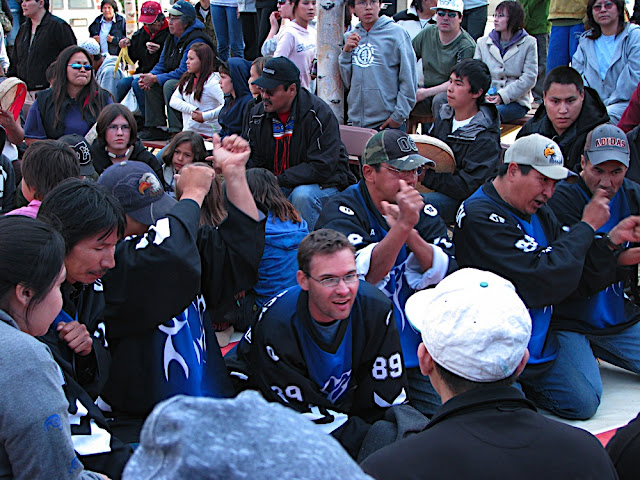 Team Wolf Pack plays.  Who's that handsome guy in jersey #89? 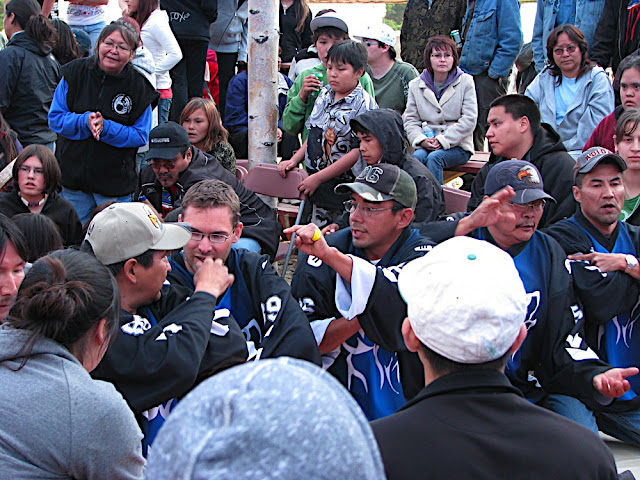 Showing our tokens.  We went on to win this game. 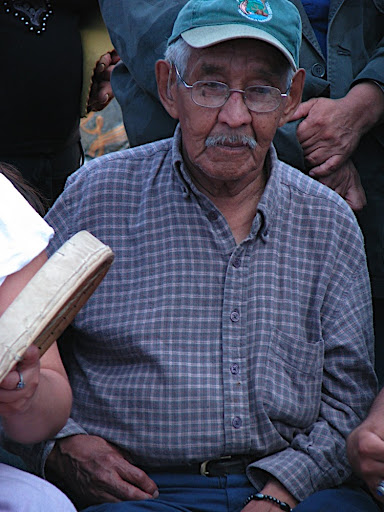 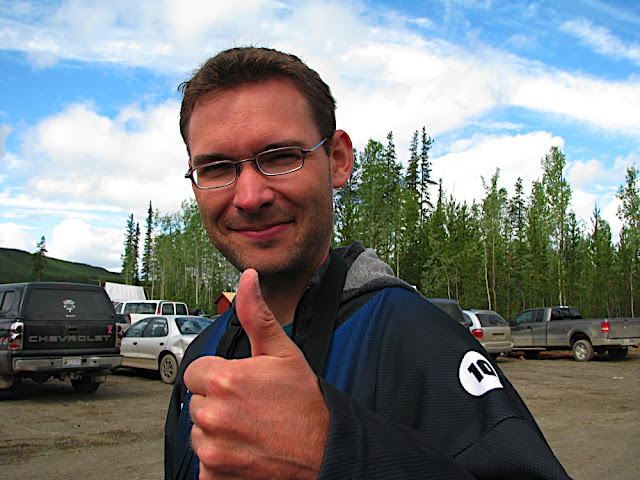 Making a hand gesture that doesn't have anything to do with hand games to show what I think of the event.

I love those guys from Meander!

I hope you get the video up soon -- it's hard to describe how hypnotic the drumming is, or explain the energy between the teams as they face off. Then there's the skill involved in psyching out your opponents and in reading the subtle clues a player might give away as they try to hide their token.

Anthony, it's a blast! I'll have some video up soon (I hope). They aren't from the liveliest of games, but they'll give you an idea of what it all looks like in action.

Oops! The event was held at "Two-Mile Lake", not "Twin Lakes". There are two lakes there. As for the two miles, I'm not quite sure about that. Because it's about two miles from Junction 37 maybe?