The rest of my trip to the NWT was fairly productive. The weather was so nice, though, that I just had to get out for a few hours one afternoon. The Beavertail Jamboree in Fort Simpson was still going on and I headed over to the Traditional Games.

The cool thing about the traditional games is that they're all based on survival skills. Typical events include log sawing, tea boiling, pole push, and log tossing. Sometimes these things need to be done quickly and they all contain an element of danger, so they all need to be done with a bit of care.

I got roped into the log sawing competition. I had a bad start but soon got into into it. It took me about 57 seconds. Some people took up to two minutes. The winner took 26 seconds.

The next event was the pole push. The pole push is simple enough - it's like tug-of-war but instead of tugging, you push. Instead of a rope, you use a peeled spruce spar. Teams of four attempt to out-push each other. I was on a team with three teenagers. We won the first push, but lost the second two. 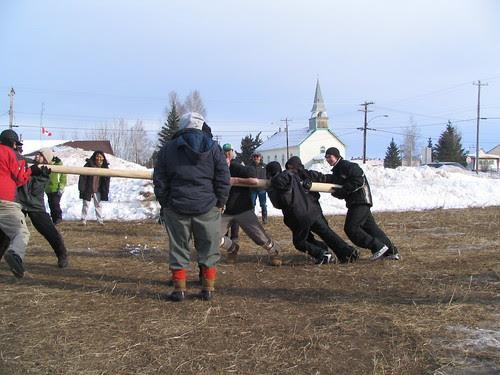 Winning the first round of the pole push. (Photo by Chris Cli) 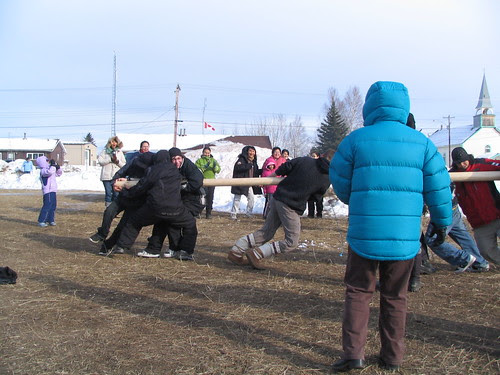 Losing the second round of the pole push. (Photo by Chris Cli) 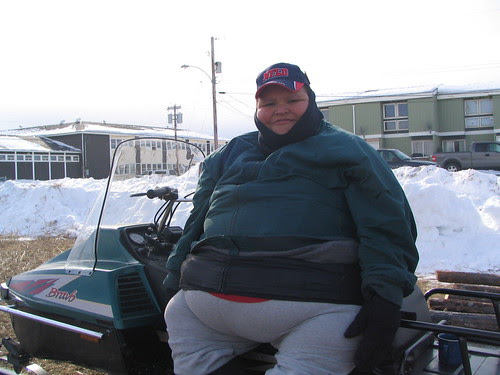 One of Fort Simpson's friendly faces, Chris Cli.
The last event of the day was the tea boil. If you let the adrenaline get to you, you can be your own worst enemy in the tea boil. The tea boil involves getting wood, splitting it, making kindling, filling an old coffee can to the brim with snow, lighting a fire and then bringing the water to a boil. If you don't split your finger with an axe or burn your fingers or lose all your matches and you manage to get your fire to light, you just might be able to boil some tea. I used a technique that I thought would be faster than building a big bonfire around the pot (the common approach), but ended up being one of the last to get my water to boil. It was worth a shot and at least I got it boiling. A couple of people didn't even get that far. 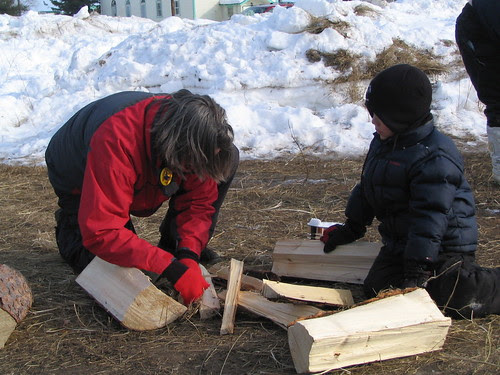 Getting ready to light the fire, each of the ladies had a young helper.  Mentoring at its best. 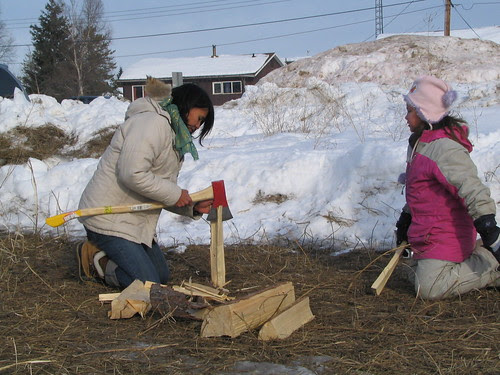 Making kindling.
Afterwards, I migrated to the big grill, which was loaded with a fresh-cooked help-yourself supply of moose meat. Delicious. I've been having moose meat cravings almost all winter.

I wonder why they don't have traditional games on TSN? They're awesome.