Back in the snowshoes again.

I love snowshoeing and it had been far too long since I had gotten out for some real snowshoeing. For me, real snowshoeing involves wearing a pair of real snowshoes - the wooden kind with babiche netting - not those metal and plastic boot weights they're trying to pass off as "new" and "improved" snowshoes.
Two years ago, my Christmas gift from Fawn was a pair of Dene-style snowshoes from Fort Liard. They still needed to get made and I wasn't able to pick them up until this past October and, other than a few quick jaunts around the neighbourhood, I haven't had much of a chance to get them into some deep snow. Showshoes and Shadow
As nice as Whitehorse is, it's pretty hard to find unpacked trails. People here really like their trails and they're quick to use them. Subsequently, they get packed. Finding unpacked snow requires using trails that are a little farther afield or not using trails at all. I decided to do a little of both.
I drove out to Jackson Lake with Nanuq and started walking on some dog team- and snow machine-packed trails. For some inexplicable reason, I seem to have a tendency to start walking uphill. It always happens. I don't know why. This time was no different. The higher we got, the less the trails were used. Finally, we reached an untrodden trail. I put my snowshoes on and continued ever upwards through the powdery snow. 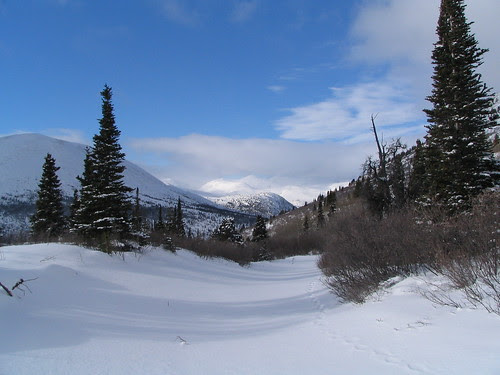 An untrodden trail.
We passed hare tracks and fox tracks and, occasionally, big, round lynx tracks. Nanuq diligently inspected every one. 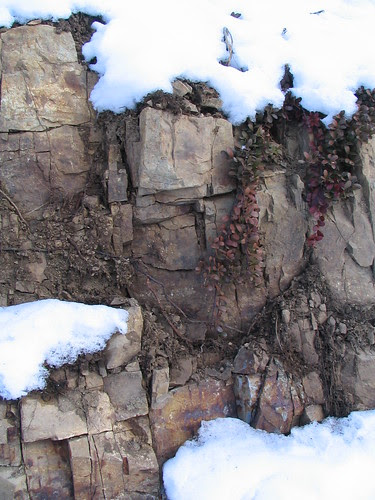 A small rock garden, warmed by the rays of the sun.
It was hot and sunny out and I had to shed some layers. I was down to a t-shirt and a hooded sweatshirt and still felt hot. I resisted the urge to wear only my t-shirt and chose to stop more frequently to cool off. While I did that, I took in the view. 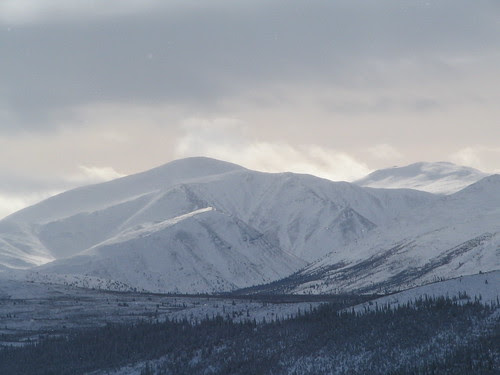 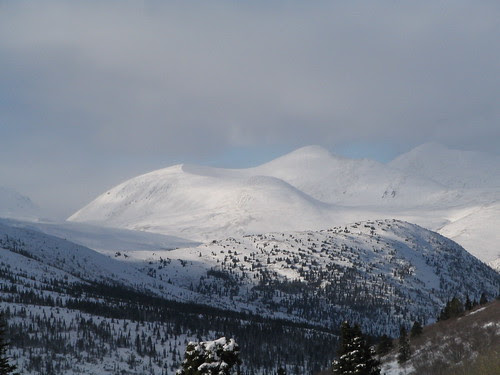 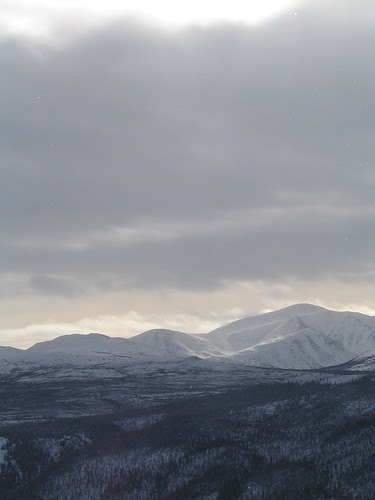 And what a view it was! The higher I got, the better the view got. I could see Fish Lake and part of Mount Granger and the valley of the Bonneville Lakes to the south. I closed my eyes and listened to the ravens and some song birds enjoying the sun. From far, far away, I could hear dozens of dogs barking. I decided to push on to the other side of the mountain where it would be quieter.
My snowshoes were great for going uphill. I was using a traditional binding, which is nothing more than a string of ribbon, cleverly tied. It's a good binding for going uphill and for slipping in and out of the snowshoes quickly, but leaves something to be desired for walking downhill.
On the wind-crusted snow, I felt like I was walking on air. On some softer snow, I took my snowshoe off and sank up to my thigh. Nanuq tried to clear his own path through the soft snow, but floundered in the deep powder. Walking became swimming and he hurried to get back to the trail I had packed. 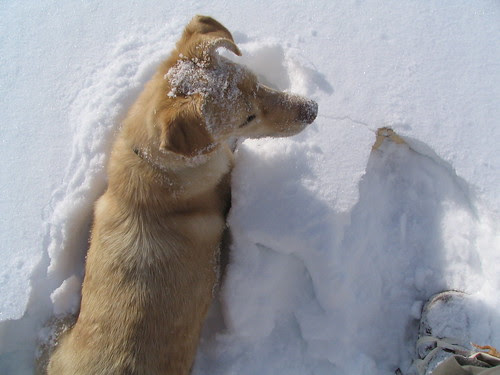 Nanuq attempts to stand in the snow (my snowshoe is on the right).
We were following an old mining exploration road and, when we reached the end, I could see the Takhini River Valley and the valley I followed to get to the Scout Lake Geocache and I could see the approximate location of the cabin where I met the naked guy last year. I smiled. It's always nice to put a piece of a geographic puzzle together. I'm guessing Mackenzie felt the same way when he finally reached the Pacific - only a little more-so that I. 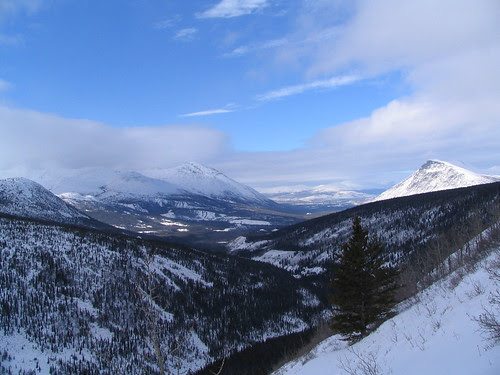 Making a connection.
At the end of the mining road, I stopped to have a snack and to listen to the quiet.
I felt myself relax. It was nice. 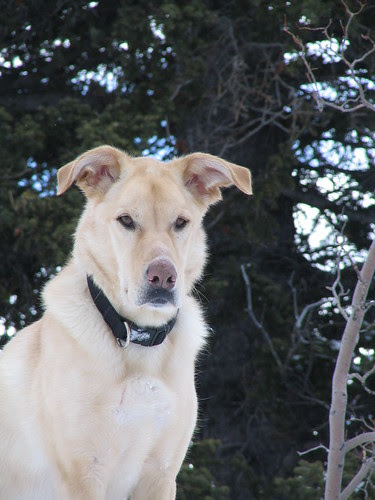 Nanuq stands guard while I enjoy some hot apple cider from my thermos.
When I was done my snack, I thought about where I would go next. I knew that I would have to turn back, but didn't want to go back the same way I came. Although it was steep, I decided to head down into the valley. 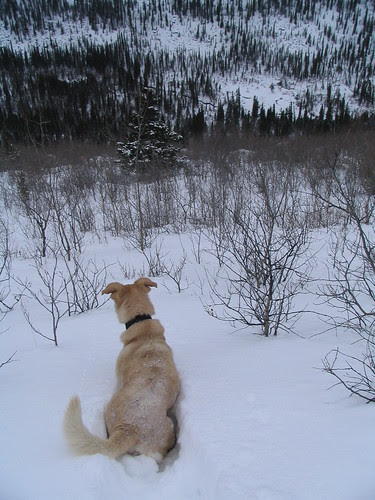 Going down into the valley, Nanuq takes a brief turn breaking trail.
It was too steep for snowshoes, so I took them off and used them as modified walking sticks as I slid through the stunted and twisted poplars down the hill. The snow was up to the tops of my thighs in places and below my knees in others, depending on how it had drifted.
For some reason, going downhill was harder than it was coming up. By the time I got to the bottom of the valley, I was huffing and puffing and my heart was pounding. I put my snowshoes back on and went to look for the small footpath that I knew ran along the north side of the valley.
It didn't take long to find the trail because a moose had already been using it as its own personal highway.
Pre-used trails can be both a blessing and a curse on snowshoes. In really fluffy snow, they can create a slightly packed foundation, which makes snowshoeing easier. When it comes to wolf or moose trails however, they can cause more than a little frustration. Instead of floating evenly on the snow, the snowshoes will have a tendency to slip to one side or another. On a narrow trail, this sometimes means having one snowshoe over the hard snow and one of the soft snow, which makes for a rather uneven gait. Add into the mix a dog who's realised that life becomes a whole lot easier for him if he stands on the end of my snowshoes, and it makes for some difficult walking. Of course, all of that is still easier than not wearing the snowshoes at all.
I could feel the burn in my legs as I worked my way along the trail. It was that good kind of burn, though; the kind that comes with a sense of accomplishment. It took a while for my body to remember the "deep snow snowshoe walk" but it eventually came back.
As I walked, I thought about the elders and old-timers who used to pack trails for their families or for their trapline or to deliver mail by dog team when the snow was too deep for the sled and the dogs. Sometimes, they would pack trail for over an hundred kilometers in just a couple of days. Forget endurance races - it was a part of everyday winter life for these guys! These days, most people would call that "crazy". As for me, I have nothing but admiration for what they did on a daily basis. Life today (for most people in developed countries) may not be easy, but it certainly is cushy.
Eventually, the trail connected with a snowmachine trail, where the snowmachine stopped and turned back. From the appearance of the track, it looked as though it turned back because the snow was too deep. Sometimes the old ways are the best ways, if you don't mind a little bit of physical exertion. Reconnecting with the packed trail.
As I walked along the valley bottom, I looked at the fresh moose tracks and at what appeared to be a set of wolverine tracks. There were some marten tracks and a few fox tracks. The bottom of the valley was a very busy place indeed!
The sun shone brightly, but it was dropping and it wouldn't be long before the valley was enveloped in shadow. The low rays brought a brightness to the valley that emphasised the bright greens of the lodgepole pines, the reds of the other conifers, the purples of the willows, and the blues in the snow. 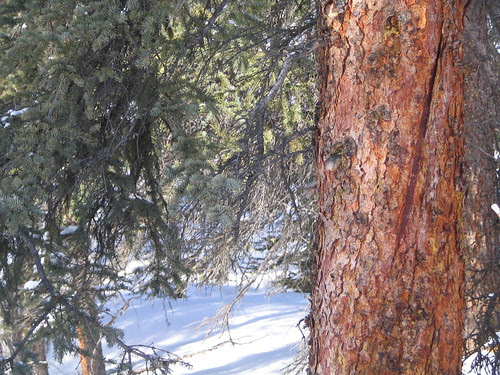 A red, red tree trunk.
There was a long overflow that we didn't have much trouble walking up on the way in, but on the way out, it looked a little more intimidating. I could hear the water gurgling underneath the soft ice, louder than it was in the morning when we ascended it. I began to wonder if it was a big, long overflow that inspired bobsledding and luging. 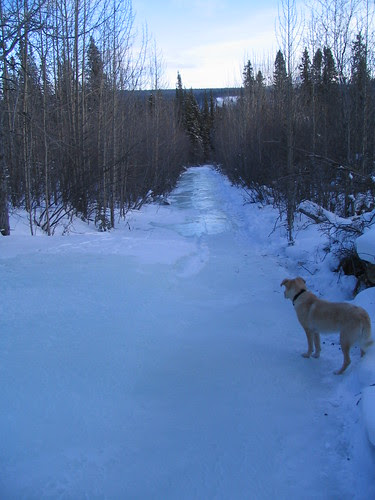 About half of the big, long overflow. 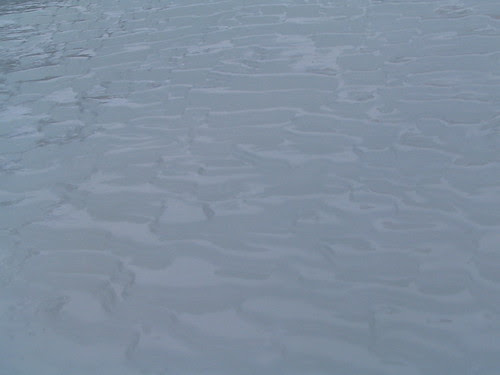 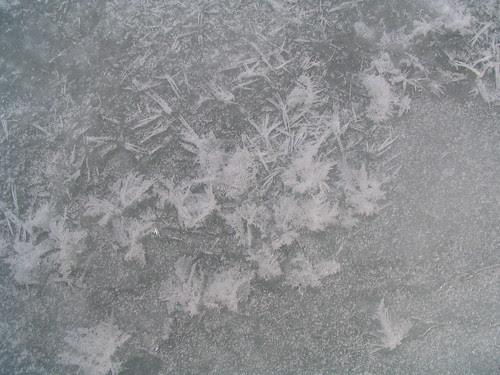 Frost feathers and frost needles along the edge of the overflow.
Walking to our trailhead, I noticed that my tracks from earlier in the day had been obliterated by a dog team. Judging by the dog team's tracks, the musher was doing a lot of hard running and the dogs seemed to be taking it fairly slow. The sled runners cut pretty deep; she must have been carrying a lot of weight in the sled. At least one of her dogs had a lot of blood in its urine. I hope she knows.

Back at the lake. 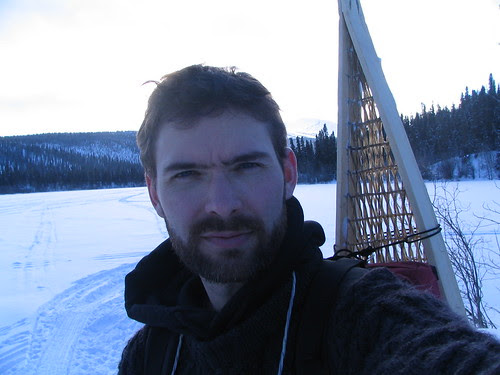 Looking serious, but only because I was trying to take this picture before my batteries died again. On the inside, I was quite content.

By the time I got back to the car, I was beat! It had been a good, long walk. Judging by how hard Nanuq slept when we got back, he'd had his share of exercise, too. He was a very happy dog and I was feeling pretty good, too. I retreated to the sauna and then had a good hot shower to soothe my aching muscles.
Physical exertion is good; it makes those little luxuries that we often take for granted even better.

If you want some fresh snow, come to the big TO. We get a "snowstorm" here every week, it seems. Today was no exception. The sidewalk wasn't ploughed, so I'm sure it would've been ideal for snowshoeing. ;-) Unfortunately it seems to melt 1 or 2 days later!