Jackson Lake OR "What the...hail?"

I usually take Friday's off work to spend with Jade; it means one less day a week in daycare. Since I work at home, I get the occasional work-related call or fax or e-mail that I have to respond to. When this happens, Jade does a great job entertaining herself by "reading" a book or by playing with some of her toys or by drawing with her crayons. When we get a chance, though, we go out.

My original plan was to hike with Jade and Nanuq to find the geocache at Cantlie Lake, 13 km each way. Unfortunately, due entirely to some work-related calls that took up too much of my morning, that plan had to be scratched because there was no longer enough time. Instead, I opted for a closer geocache at Jackson Lake.

We'd never been to Jackson Lake before, but I heard it was nice. I had itchy feet and needed to go for a hike.

It was a fairly quick drive there, so I was shocked to see that Jade was nodding off in her car seat. She perked right up when I transferred her to the carrier pack and happily babbled away behind me, practising her sounds and trying out new words. Nanuq ran all around us, investigating the area.

Jackson Lake
Fall has definitely arrived. The fireweed is turning red and the seed pods are busting with its cottony seed. The poplar leaves are turning yellow and the bearberry leaves are turning scarlet. The berry plants are all full of ripened berries. Looking high into the alpine, I could see the golden glow of the scrub birch. 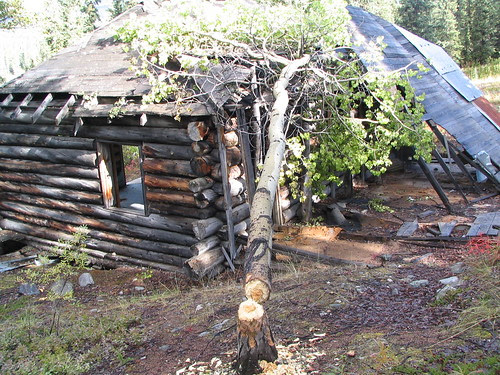 An old cabin pays the price as beavers top-up their winter food supply.
It wasn't long before we found the cache. Jade played with the cache's contents while I made an entry in the log book. With that out of the way, we could get on with the important matter of exploring this new place. 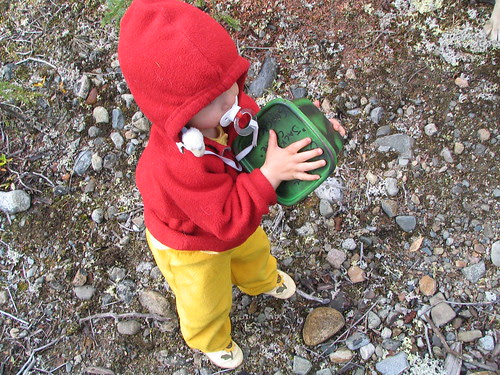 We found it! We found it!
It had either rained recently or there was a lot of dew on everything because the ground was damp and the willows and spruce were shedding their dampness onto us every time we walked by. It was lunch time, so we went to find a dry spot to eat. We followed a small but noisy creek up to a small dam. There, we found some good rocks to sit on so we tucked into our sandwiches. 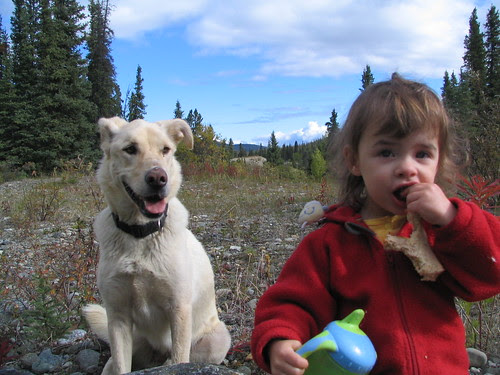 Mmmm...food.
As we ate, I watched the clouds building in the distance. I realised that, once again, our plans were going to be changed - but we were going to make the best of it.

After we finished eating, we followed a trail up the creek. For some reason, the creek was held up against the hill by a man-made berm. The valley below, which should have been full of water, was dry. Judging by the size of the willows and spruce along the berm, the diversion is at least forty years old. Why this mini-canal was made, I cannot imagine.

We continued to follow the trail along the unnatural creek until we reached a pinch point in the valley. It was here that I could see that the creek had been diverted from its original course. Leaving the creek and climbing upwards, we turned west. We were now on a north-facing slope. Soft, wet moss soaked my shoes as the thin willows soaked my pants. Jade continued to babble happily behind me, especially when I passed her some sweet blueberries.

Cutting down the slope and across the original creek bed, we meandered up the south-facing side of the valley and over the hills, heading in the general direction of the car. The sky was darkening quickly and a few small drops of rain began to fall. Every time we climbed a south-facing slope, where the brush was not as thick, I looked back to take in the views. There are so many places to go, and much too little time to go there. 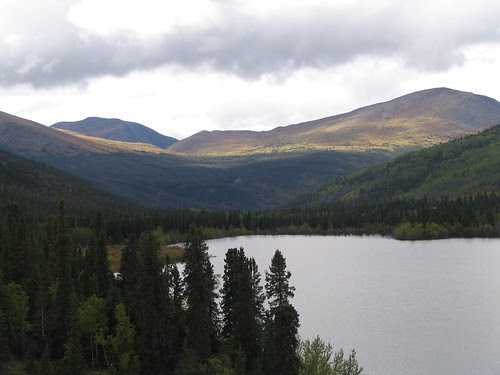 Looking at places that I would like to go.
We followed a wash-out down to the lake for a quick break and so I could check Jade's diaper. Everything seemed to be in order. Jade and Nanuq enjoyed playing on the gravel bar, both wanting to play in the water. 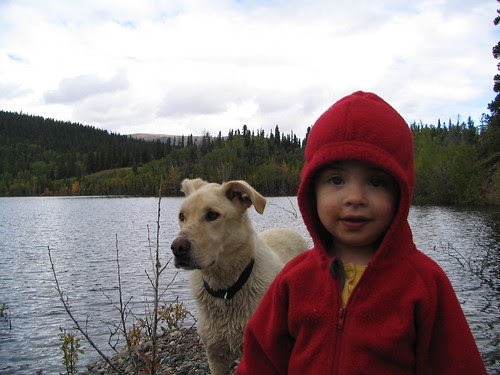 Jade, her face covered by her snack, and Nanuq, his fur damp from walking over wet moss, down by the lake.
The weather continued to worsen, so I loaded Jade back into the carrier and set off at a brisk pace. It was now past her nap time and, after a few moans, she drifted off to sleep. 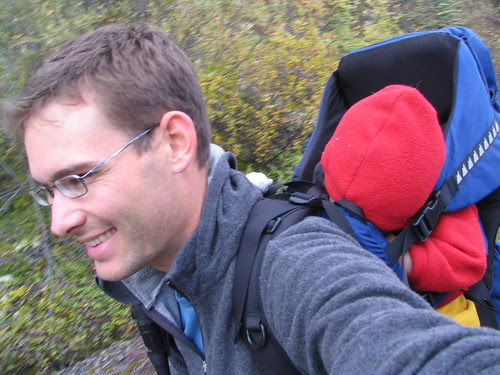 While walking briskly to beat the rain, Jade naps in the carrier.

The skies opened up just as we were approaching the car. Because I didn't want to wake her, I worked quickly but gently to load Jade into her car seat. The transfer was a success. 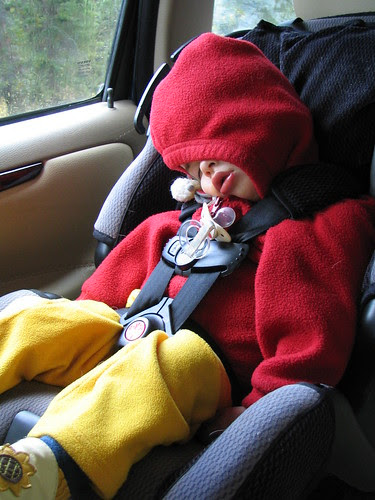 It had been a short hike, but a pleasant one. I've really come to enjoy my Fridays with Jade. Never one to complain, and always willing to go somewhere new, she makes a great hiking partner.

I wonder where we'll go next Friday...

I just realised that the cabin is missing all of its windows...you wouldn't have anything to do with that, would you Stacie?

Oh, and we have a 4'x6' triple-paner for you - come and get it whenever you like (if you still need it).