The Hole in the Wall

Sometimes, when planning trips, no matter how short or how long, things don't turn out at the last minute the way that you expected them to. Today was a perfect example of that.

One day, Tammera mentioned that she wanted to check out the "Hole in the Wall" above Annie Lake; a place that I was also interested in visiting. 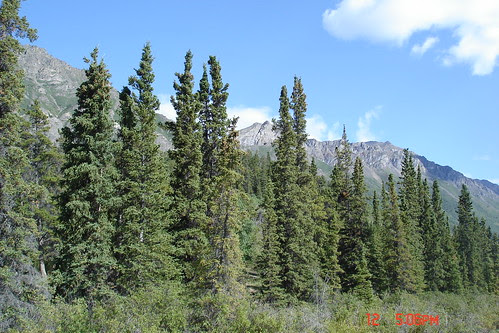 Can you see it? Waaaaay up there on the mountain?
I'm not entirely sure how the Hole came to be. I have heard a couple stories that it was the workings an old gold mine. I'm pretty sure it's not a naturally created, but I suppose it could be. It's in an awfully inconvenient location for a gold mine - but I guess the yellow stuff does strange and interesting things to people.

The hiking party was supposed to consist of me, Jade, Tammera, Jay, Mac, and Jay's daughter. At the last minute, however, Jay got tied up with work, which meant that Mac and her daughter would not be coming. Because Fawn, Jade and I went to see the African Children's Choir this morning, Jade was pooped and sorely needed a nap. Fawn had just put Jade down as Tammera arrived. Nanuq couldn't come because his dewclaw toe is still swollen and he's still confined to the easy-going stuff. It's strange to go hiking without him.

So, our party of seven was now down to a party of two. And, given the terrain, it probably worked out for the best.

We started on the north end of the lake, walking quickly through the open lodgepole pine forest. Before long, we found ourselves ascending Needle Mountain, walking up through soapberries, stunted poplars, wild rose and juniper. Not long after that, we were scrambling across loose rock and making our way around the mountain to our destination.

It was at this point, scrambling over the loose rock, that I realised I was glad that I wasn't carrying Jade in the carrier pack. I could have managed the ascent (albeit much more slowly) but I would not have been comfortable risking our safety by picking our way across a steep slope on apple- and watermelon-sized rocks that had a tendency to slide downwards every time I took a step.

As I contemplated how short this hike would have been if I had brought Jade along, Tammera and I kept climbing ever upwards and around the mountain, attempting to find the best route through the scrub brush and over the rock slides. 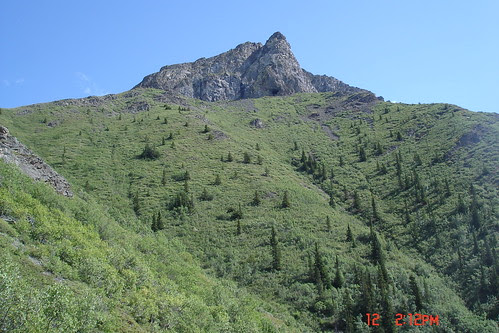 Getting a better look at the Hole in the Wall. I think it should be called the "Hole in the Gnome's Hat"
Rocky outcrops began interrupting our route, and the increasing amounts of loose, sliding rock didn't improve the situation. We headed up through a pass loaded with scrub birch. The birch scratched at my legs, but at least it provided reliable footing. 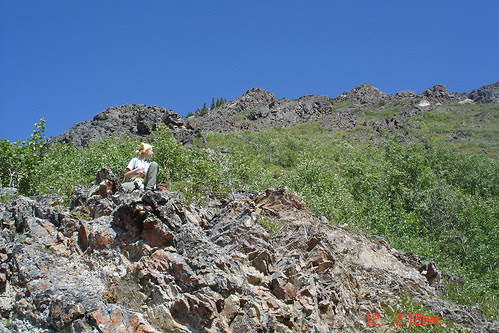 Taking a quick break on a rocky outcrop.
We cut back up a small game trail that led out of the pass, onto a small, rocky ridge. Over the top of the ridge, I detected the scent of, what seemed like, a petting zoo. The game trail led along a cliff. The cliff had a two-foot wide ledge that was used by the sheep as a shelter from the wind. Even Mr. Magoo would have spotted the blanket of little black sheep droppings that covered the ledge - the two foot wide ledge that was our trail.

I could easily tell why the sheep liked the spot so much: It was sheltered from the wind, was not easy to see, was not easily accessible by predators, and a small cave lined with calcium(?). Now, what self-respecting sheep doesn't hang out at a mineral lick? 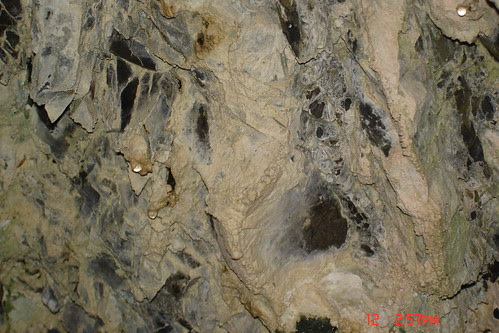 Limestone? Calcium? Judging by the sheep droppings in the tiny cave, it doesn't really matter.
We were now able to pick up a well-travelled sheep trail to the saddle that led to the Hole in the Wall. A little more climbing and a little more side-sloping and we were finally at our destination. The heat was radiating off the rocks. We were hot and we were sweaty, so we took refuge in the shady coolness of the Hole.

The floor of the Hole was lined with sheep droppings. Other than that, there's not much to say about the place. It goes back into the cliff face for about twenty feet and...

...That's about it. It's really not all that exciting, though the views were nice. 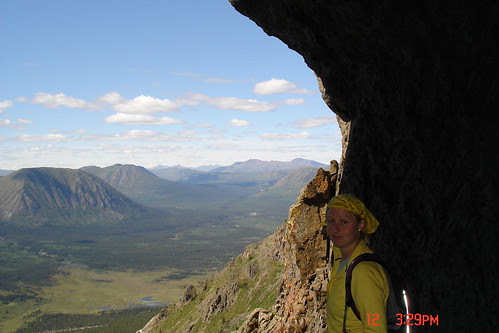 Yup. It's just a big, shallow hole in the wall - a hole filled with sheep poop.
Tammera had to get some work done in the evening, so it was time to be getting back. I had hoped to hike to the peak of Needle Mountain, but that would have to wait for another day. We started our descent, picking a few alpine blueberries along the way.

As so often seems the case, the descent was harder on our legs than the ascent. We zig-zagged down the slope, often sliding with the rocks. I opted to walk on the junipers whenever possible since I knew that they weren't going to suddenly give-way beneath my feet like the rocks would (and constantly did).

Finally, we were back at the base of the mountain where we picked up a game trail that led us back towards the road. I doused my head at a small stream (which I suspect to be a spring) that was running down the mountain. We didn't cross the stream on our way up and I got to wondering about its source - something that I'll return to investigate some day.

The Annie Lake Road was busier than I had expected. During our hike up and down the mountain, we could see the traffic running back and forth on the gravel road below. As we climbed into Tammera's truck, I watched as some people (who had just caught a fish by the culvert at the end of the lake) climbed into their truck (into the cab and into the back). The truck then charged down a side road that was considerably wetter than the one that we were on, spraying water all over the passengers in the back of the truck. It looked like a lot of fun.

I'd enjoyed myself, too. I guess there are a lot of ways to have fun, and everyone's tastes are different. As far as I'm concerned, there isn't much better than, slogging through thick brush or up the side of a mountain and exploring new places. And there's so very much to explore.

Hi Micheal,
I've never been up that way. The views from the "Hole in the Wall" make me want to hike up there. How long did it take to hike there and back?

The hike from the road to the Hole in the Wall and back took us about three-and-a-half hours at a steady (what some might consider "aggressive") pace. If you do the hike, I would recommend allowing yourself more time - if not for anything more than exploring and picking blueberries. Besides, once you get to the top, it's so beautiful that you won't want to head back down.