Doodle all the day...

If you haven't heard of facebook.com, you will. It is an exceptional time waster, but it does have it's benefits, like getting back in touch with my high-school buddy, Andrew (Among others). We'd lost contact with each other over the years, but it doesn't seem like it was that long ago when we were reading comics, catching frogs and eating their legs by the camp fire at his parents' fishing camp, tricking other kids into eating dog food, and doodling all the day. We drew a lot. In class, after class - it didn't matter.

So, he sent me a message and asked me if I was still drawing. I had to admit that, other than carving the occasional pumpkin or pile of snow, I have not been doing much art at all.

That's why I was as pleased as raven at a Tim Hortons dumpster that the Dawson City Arts Society sent me a puzzle piece - I had an excuse to get back into it.

Into art, that is.

Not that you ever really need an excuse to do art.

OK, I needed an excuse.

The Dawson City Arts Society has been organizing a collaborative art project; 400 puzzle pieces were distributed to artists who were allowed to do anything they want to the piece, as long as the piece keeps to the general colour scheme provided and retains its black lines. When all of the pieces are done, the puzzle will be put together again to form a giant mystery image.

Only, it won't be a mystery picture when they put the pieces together.

It's just a mystery now.

Because the pieces aren't together.

You know what I mean. 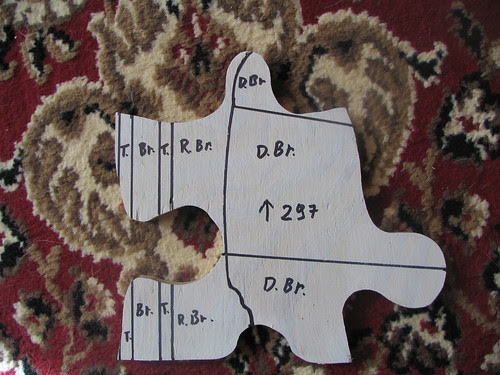 My puzzle piece (#297), with letters on it indicating what colour schemes I had to use (tan, brown, reddish brown, and dark brown), and the black lines that had to show on the finished piece.

It's pretty neat, I think, that the Dawson City Arts Society would trust me with one of their puzzle pieces, especially since I'm neither a professional artist (unless the $100 I got from doing a carving in Edmonton this winter counts) nor am I a resident of Dawson.

Fawn got a piece also, but I think I ended up with the easier piece to work on. I decided to a watercolour, which meant doing the work on a piece of paper, cutting it out, gluing it onto the puzzle piece, and then giving it a weather-proof coating.

This is what the painting looks like before I glued it onto the puzzle piece and drew the black lines back in: 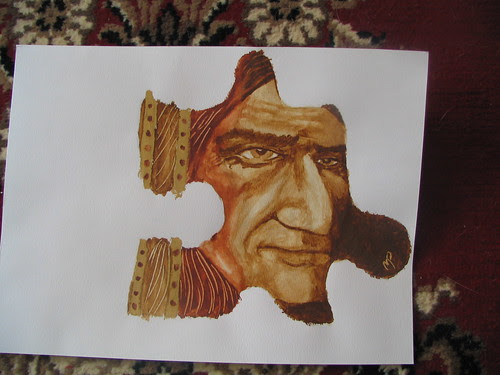 Later, when I have one, I'll add a picture of the finished piece.

So glad you're in touch with Andrew again.....we used to talk on and off when he worked at LOEB, but I've only seen him once since.

Great painting....too bad you have to put the black lines on it!

Wowee - you sure can paint. And carve. I love the carvings.