Dogsled Stacie invited Nanuq and me to go skijoring. My hope was that, with a bit of guidance from an experienced skijoring/sled dog, Nanuq would discover that he is allowed to run while wearing his harness.

After some minor adjustments to the system, I hooked up Nanuq and his mentor, Jack, to my harness. 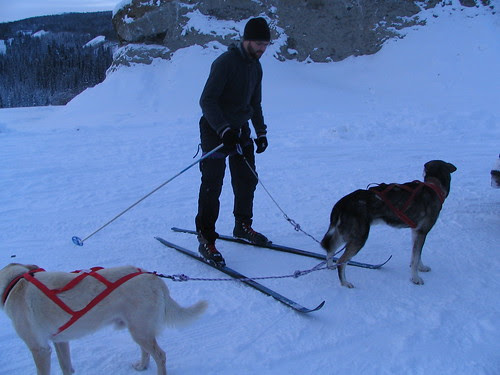 Getting ready to go skijoring.
Nanuq: I'm going this way.
Jack: You do that puppy-boy. I'm going this way.
Me: Hey, aren't I supposed to be in charge here?
When we finally got organized, we headed to the start of the trail where Jack took off like a shot! The sudden acceleration caused the bungee cord portion of my line to detach and chase after the dogs. I called to them to stop, which Nanuq did a little faster than Jack. Nanuq's harness pulled over his head. Fawn, who was carrying Jade in her amauti, dashed down to the dogs and held them while I untangled Nanuq from his harness and made some adjustments to my pulling system.

Ready to go again, I gave the OK and we rocketed away. It was AWESOME! Nanuq didn't pull at first and I was afraid that his harness was going to get pulled over his head again, but he caught on quickly and caught up to Jack. Jack was a powerhouse who knew how it was supposed to be done and it wasn't too long before Nanuq's line was taut. The mentoring had begun.

I "whooped" and "yahooed" as the wind bit through my clothes. I had dressed as if I were going skijoring with Nanuq - an activity that requires a lot more effort on my part - and now realised that, if my heart wasn't racing a mile-a-minute from the excitement, I would be horribly under-dressed and very cold.

They were going so fast, I couldn't ski skate-style and I couldn't ski in the classic-style; all I would do was push with my poles and that wasn't helping much. Anything else I did just slowed them down. In a way, I was grateful that the snow was "sticky", because if my skis had slid over the snow any faster, the skin on my face would have begun to peel back from the G-forces.

At least, that's how it was when we were moving. At one point, a smog1 of snowmobilers passed us. Nanuq, with his bush dog training, moved to the side of the trail and sat down to let the snowmachines pass, just like I taught him to do. Jack, on the other hand, with his sled dog training, kept running, once again pulling Nanuq's harness over his head. I could see that there would be some more un-training to do with Nanuq.

Once we got Nanuq untangled again, we were off. There were other skijorers on the trail who were stopped for a quick break. We slowed down, there was a bit of a tangle and the...

I can't really remember what happened, but at some point, the bungee cord snapped and Nanuq and Jack kept running down the trail. They dashed off and entered the "P" loop on the trail, dragging the tow line behind them and leaving me alone without my mush power.

I skied quickly over to the bottom of the "P" loop and caught them coming out. Thank goodness they knew the trail. Once again, Nanuq's harness was over his head. While I tried to fix it, Jack kept insisting that we should still be running and he pulled and tugged and jumped on the line. Stacie was ahead of us now and he wanted to be with her and his kennel companions.

I eventually managed to get Nanuq's harness fixed without letting Jack drag me head-first along the trail. I removed the damaged bungee connection and attached the dogs to my harness again.

Jack was still rearing to go and, as I began to let him pick up speed, I could see Nanuq hesitate for a second, think better of it (because he didn't want his harness pulled over his head again), start to run side-by-side with Jack. Once again, we were off!

Except for a brief stop near resting skijorers and their dogs, we ran clean back to where we started, with Jack and Nanuq pulling all the way at high speed. If we hadn't had several harness untangling delays, we might have completed the 5km course in record time. It was certainly the fastest Nanuq and I have ever done it!

Hopefully, Stacie will let me and Nanuq skijor with Jack again. I think Nanuq enjoyed it and I know I sure did!


1If you can have a murder of ravens or a pride of lions, why not a smog of snowmobilers?

Email ThisBlogThis!Share to TwitterShare to FacebookShare to Pinterest
Topics: skijoring

For sure you can borrow him again! He seemed to have fun, and it's great for them to get out with someone other than me once in a while.

I'm glad they didn't leave you in their snowdust after they did the loop without you!

Glad to see Nanuq picked it up so quickly!

Check out my blog for a great pic of Nanuq doing his best to get out of the harness! :)

Stacie, I love the pictures. Especially the one of Jack and Nanuq playing "who's the stronger puller".