The Mighty Hunter - and the dog that should have known better.

It has been a while since I made an entry on atlatling, mostly because I haven't done it in a while. This summer, I wasn't able to defend my 3rd place "Pro" title because I was out of town when the Beringia Centre held their annual competition. But I've often been thinking that I need to get out for a bit of atlatl practice. My lack of darts has prevented practice thus far, so when Atlatl Mike (1st place champion) invited us over for crepes this afternoon, we decided it was time for a bit of atlatl practice.

We decided to take a walk in the green space near my house, taking practice throws in the clearings along the trails. I always forget how frustrating it can be to take Nanuq along when we're throwing darts. He likes to chase the darts and, when three throwers are all aiming for the same target, accidents are bound to happen. 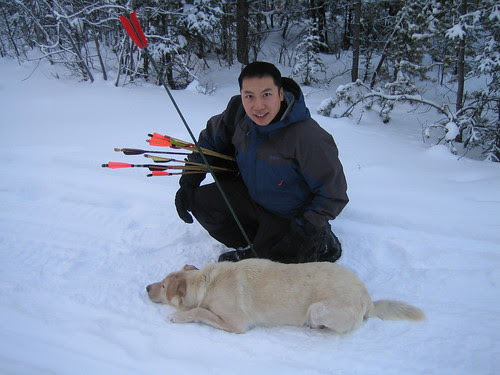 Norris, the Mighty Hunter
(No animals were harmed for the taking of this photograph.
Sometimes that "play dead" command really comes in handy!)

Fortunately, none did. In fact, Nanuq was generally great, hanging out with us no matter how much he wanted to chase the darts. Of course, all the doggy energy that would normally be devoted to chasing flying sticks had to go towards something else. In this case, it went towards biting people's feet, which is not acceptable behaviour, but is still the lesser evil when the alternative is shish kapup.

It's amazing to think that the simple atlatl was able to take down mastadons and can punch holes through car doors (not that we've done either of those). If you've ever wanted to throw a stick the length of a soccer field (the distance of the throw, not the length of the stick), get in touch with Atlatl Mike!