Can Opener in a Can

I'm a lucky guy; I have a lot to be thankful for and I know it. One of the things that I give thanks for is friends like George, from Nahanni Butte.

While we were travelling, George sent me an e-mail telling me that he put a package into the mail for me, but didn't tell me what was in it. Only that it would be useful the next time he sent me something by mail.

George is a pretty handy and creative guy and is good at working with wood. He comes from a long line of handy guys. A relative of his, who was a trapper and lived off the land, once made a fiddle from scratch. He had only seen a fiddle once or twice before attempting to make his own. Made with things he harvested from the land, and the occasional scrap he collected here and there, he carved and assembled the fiddle by hand. And it worked! (If you don't believe me, call the folks at the Prince of Wales Northern Heritage Centre in Yellowknife. The fiddle is kept in their collection.)

Based on his hint, I thought that maybe George sent me a mail box.

When we got back from being away for almost three weeks, there was a big pile of mail waiting for us on the kitchen table. Driven by curiosity, the first thing I went for was George's package. If it was a mail box, it was a pretty small package to fit a mail box into.

The package was wrapped in several layers of tape. I struggled with the tape for several minutes before going on an extended search for a pair of scissors.

After finally locating the scissors, I cut away the remaining tape and tore into the paper wrapping. Beneath the wrapping was a blue box, formerly used to dispense aluminium foil. The box was wrapped in a thick layer of tape.

Gingerly pulling and snipping away the tape, fearing that I might damage the mysterious contents of the package, I freed from the blue box a roll of blue cloth, secured by black twist ties.

I began to wonder if George had sent me a t-shirt, not quite knowing what that would have to do with being useful the next time he sent me something by mail.

Untwisting the twist ties and unrolling the blue cloth, I quickly discovered that it wasn't a t-shirt after all. George had sent me a letter opener!

With a handle made out of moose antler, an eagle head carved into the end, I held the letter opener in my hand, admiring the craftsmanship. It was comfortable in my palm; nicely balanced. 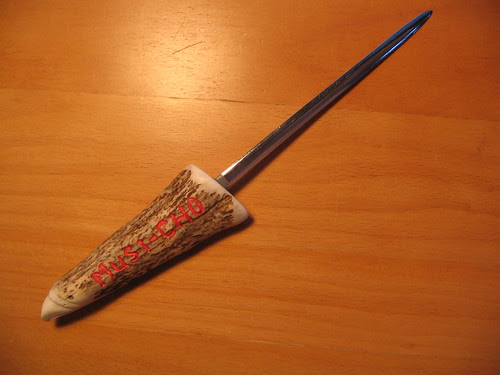 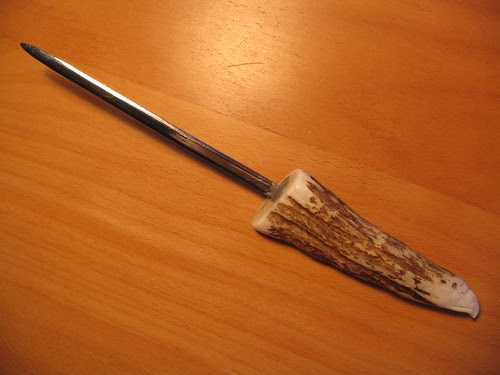 Ignoring the irony of how handy the letter opener would have been to open the package that contained it, I began to attack the pile of letters on the kitchen table. What was once a mundane task (opening bills) became fun! Before I knew it, all the mail had been opened. I began to look for other letters to open, but I had opened them all.

I set the letter opener down, then picked it up and admired it some more before setting it down again, looking forward to the next day, when the mail man would bring some fresh envelopes that would need to be opened by my awesome new letter opener.