On my way into the Scout Lake Road, we were passed by a dog team towing a four-wheeler. The road had snow on it, but the warm temperatures would make the snow slushy before long.

Which made my choice of footwear a good one. Before I left, I debated about which footgear to wear. Should I bring running shoes? Hiking boots? Winter boots? In the end, I threw my running shoes into the car and slipped into my green, insulated rubber boots. It was too warm for winter boots and too wet for hiking boots or running shoes. As it turned out, the rubber boots were a good choice.

The ultimate spring/fall footwear, I have yet to meet a northerner who doesn't take an inordinate amount of pride in his/her flashy green boots, whether walking around or jigging at a community get-together.

I drove up to a spot where a bunch of rocks had collapsed over the road. I could have driven through it (and did, most of the way), but the slope of the hill and layer of packed and slippery snow might have forced the side of my car into a large rock, so I backed back down the hill and parked. It was just under 6km to the geocache, as the crow flies. That would be 12 or more kilometres in my rubber boots. I needed the exercise anyways. 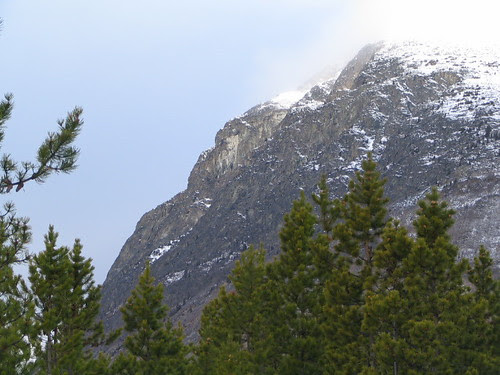 "The wind whips-up the snow on top of the mountains."
Kamikaze Squirrels
Nanuq and I walked along the road, down towards the valley. The clouds lifted slightly to allow some sunlight through, but it made the snow so bright that it had been better when the clouds obscured the sun. The wind blew steadily, bringing the clouds in front of the sun again. 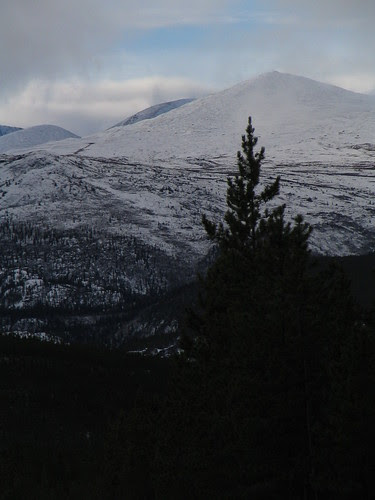 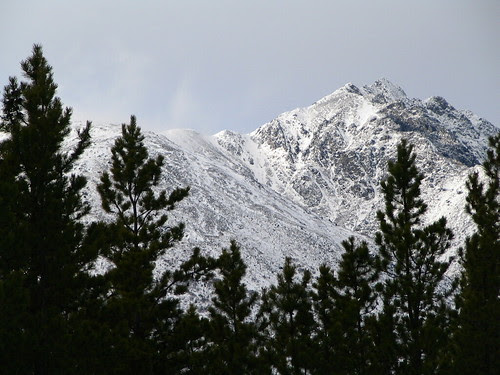 "The sun shines on the mountains."

A few minutes into our walk, Nanuq froze and, having learned a long time ago that when he freezes its for a good reason, I stopped also. I could see it, but I couldn't quite believe it. I stared in dumb silence and so did Nanuq. Two squirrels were running at full speed, up the road, directly at us.

Was it some strange version of squirrel "chicken"? Was it a mutual suicide pact? Were they a blitzkreig force for the Squirrel Army? Were they just plain...nuts!? They were running up the road straight at Nanuq!

Nanuq came to his senses and charged towards the squirrels. I called out to Nanuq and the momentary distraction was just enough to let the squirrel dodge off the side of the road and up a tree. The second squirrel quickly followed. 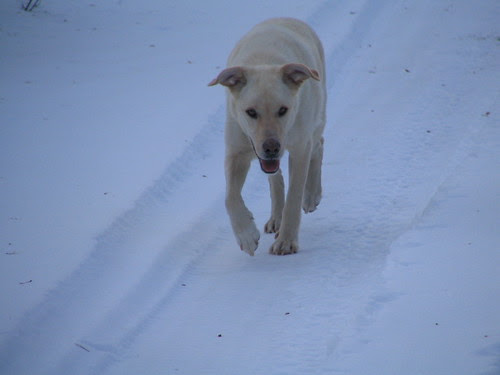 Did you see those crazy squirrels?! Huh?! Huh?!"
We continued down the gentle slope through seemingly endless lodgepole pine forests. The tell-tale burnt and fallen trees told the story of a rather fierce forest fire years ago, and the flat-topped stumps and branches off the road told the story of timber recover efforts in subsequent years. 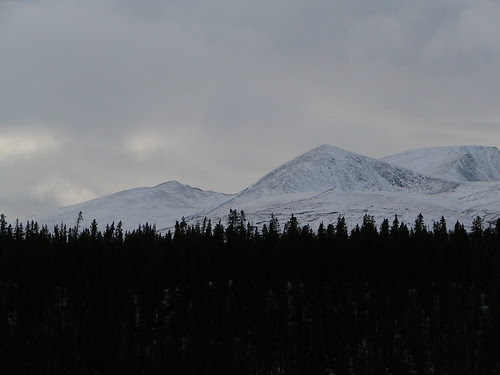 "A sea of lodgepole pine"
The wind was strong and noisy and warm. The further into the valley we got, the less snow there was. Nanuq sniffed along the trail and pointed out some wolverine tracks to me.

"Nanuq x 2"
Dream Cabin
In time, I spotted the lake, but decided to do a little exploring around the lake first. I followed some fresh ATV tracks into a mature forest.

Out of the corner of my eye I spotted some wood smoke. Because of the direction of the wind, I hadn't smelled it and Nanuq didn't seem to think it worthwhile to notify me. Or maybe I just didn't notice that he was trying to tell me something.

By the time I noticed the cabin, Nanuq was well ahead of me, across a well-made wooden bridge. I was going to call him quietly back and proceed on my merry way, but a naked man emerged from a smaller shack - the source of the woodsmoke - and looked towards Nanuq.

Ashamed at my breach of camp etiquette (I should have announced myself long before the occupants of the cabin could see me - which is a good way to make sure you don't get shot by the more eccentric or drunk cabin dwellers) I called, "Hello! Nice place you've got here!"

And I meant it. It was a nice cabin built in the shelter of the trees, alongside a happy little creek. Near the cabin, there was a ram's head sitting part way in a pot of boiling water. Either it was a very unusual way to make a stew or he was boiling the flesh off the skull. Or maybe both. Closer to the creek was a large sauna. It was the perfect mix of amenities in the ideal setting. I knew it instantly. It was my dream cabin - except for the naked man.

He stood between the cabin and the sauna, strategically angling himself so he wouldn't have to hang onto his privates anymore, not that he seemed to concerned about that. I'm sure he did this more for my comfort than his own. He told me that the trail continued past the cabin and eventually to the Ibex Valley, and invited me to pass through.

I thanked him for the information and told him that I was just circumnavigating Scout Lake, but would check that trail out another day.

I walked back along the trail for a few metres and left it to cut through the trees towards the lake. I picked up a trail with relatively fresh tracks from a pack of wolves, and followed it westwards along the base of a grassy slope. I followed the trail to a series of beaver ponds and then decided to head up the slope for a better view of the valley. 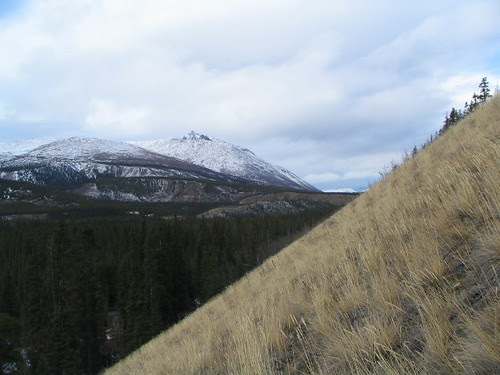 "Up on the grassy slope."
The views were great, but I couldn't see the cabin from the top of the hill. It was located well, increasing my admiration for the spot. I walked along the ridge, looking at the sheep tracks and dodging the water-logged sheep droppings. 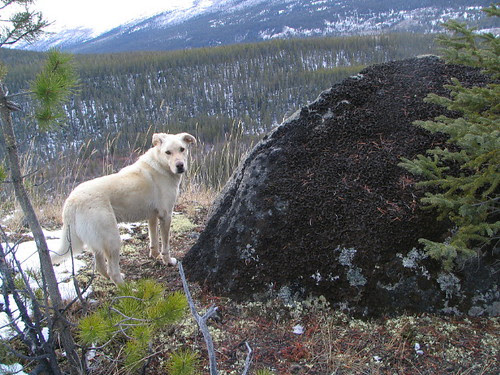 "A whole lot of rock tripe."
Two Caches
It was easy to find the geocache, once I started looking for it. The geocache is an old one, in terms of geocaching. The container was wrapped in a City of Whitehorse flag and has been since 2003. The flag was wet and mildewy and unpleasant to touch, yet I still wrapped the container in the flag when I was done signing the log book. 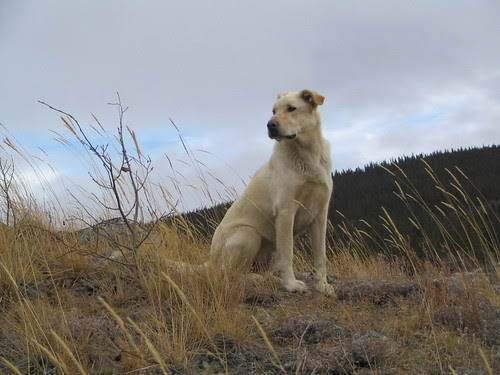 "Nanuq surveys the cache site."
It was time to head back to the car, but I stopped to enjoy a snack on the side of the lake first. I watched as small shrimp-like critters scooted around in the water.

Now, walking along a road is fine, but not always exciting. I decided to ditch the road and make my way back through the trees.

The going was easy. The trees were spaced well apart with very little growth between them. We weren't very far into the trees before I spotted a log structure, which I assume is an old, but very low, cache. 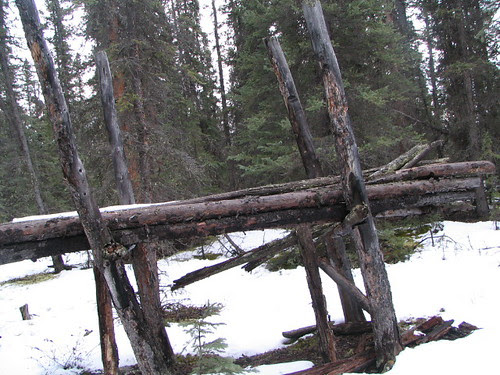 "A low cache?"
Creepy Willows
The going continued to be easy and in the wet snow I was grateful to be wearing my rubber boots. We followed the ridges and, on occasion, used the mountains in the distance as landmarks.

There were signs of old human activity everywhere, mostly in the form of cut stumps. When we came to a long stretch of willow forest, I opted to follow a narrow hand-cut trail through.

There have been very few times when I've been creeped out in the bush, day or night. In fact, I feel more relaxed in the bush than anywhere else. But there was something in that old willow stand that I just didn't like. The further we went, the more I could feel the hair on the back of my neck stand on end. Nanuq stuck to my side, indicating that there was something he didn't like about it either. 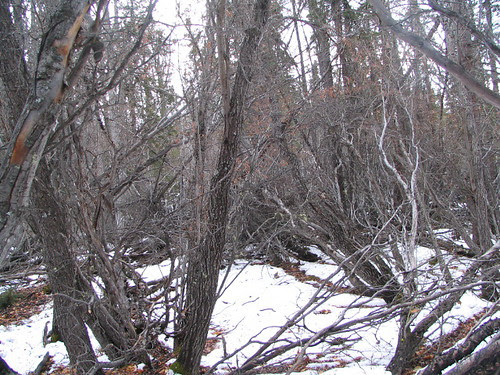 "Creepy willow. (Creepier in real life than in this picture, anyways.)"
The wind was blowing and the old, tall willows rubbed against each other. A noise that sounded like an elk bugle sounded in the distance on one side. I had not seen any elk sign in the area. Then, on the other side, a sound like a dog whimpering. A squirrel chattered somewhere behind us. Only it wasn't chattering at us. We were upwind of whatever might be following us, if anything.

I didn't like the situation so I cut 90 degrees, following a moose trail, eventually into a grassy clearing.


Trails! Trails Everywhere!
Following the clearing to its end, we picked up on a man-made trail. We followed that to where it met with another trail. And then another and then another. Picking up a trail that seemed more like a forest access road, we followed it into a young stand of regrowth and out to the road that we took in. In the forest stand, there were squirrel and rabbit tracks everywhere. 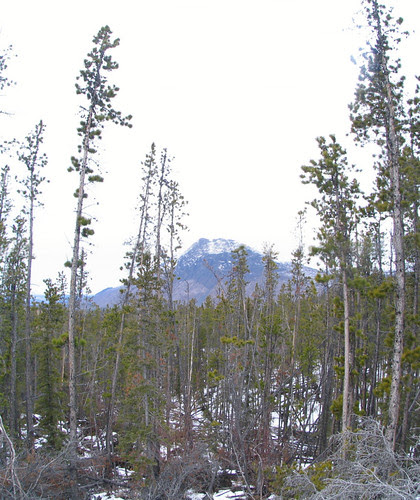 "A rather hard-to-miss landmark."
Bugs & Kisses
The air was warm and there was far less snow on the road than there had been on the way in. I pulled a Hershey's kiss out of my pocket and ate it as a bug flew across my path. Possibly the last flying insect I would see before the spring.

The sun was at my back and I chased my shadow back to the car. My shadow kept getting further and further ahead of me. In the end, though, we arrived at our destination together.

It felt great to get out and explore somewhere new. I discovered a great area to explore by bike next summer. Or maybe even this winter.

Email ThisBlogThis!Share to TwitterShare to FacebookShare to Pinterest
Topics: geocaching

Just in case I get into the same situation...how does one announce their presence before the cabin occupants can see you? I'd kinda like to avoid a repeat of your experience : )

When you know that you are in the proximity of a camp or cabin, but still out of visual range, you cup your hands around you mouth in a megaphone fashion and shout "Hellloooooooooooooooo!"