A cut above the rest.

When I lived in Fort Liard, I spent a season coaching the boys soccer team. The apex of every soccer season in the NWT is the Super Soccer Tournament in Yellowknife. Teams from all around the territory travel to Yellowknife to compete in the tournament.

Of course, getting a team (and in our case, two teams) from Fort Liard to Yellowknife wasn't easy (The 11 hour bus ride to Hay River - a trip that would normally take six hours - in a blizzard, and then a flight on a DC-3 in the morning in weather that wasn't much better, is a story on its own), and it certainly wasn't cheap. We depended heavily on what the players could raise from countless youth dances, a car wash, and whatever else they could do to raise money. As an added incentive to help the players raise the money they needed, two of the RCMP officers offered to dye their hair if the players reached their fundraising target.

And reach their target they did. We might not have done it without the support of the officers. It was a magical day for everyone when Cst. Lowing and Cpl. Seafoot sat in front of the entire school and the students dyed the RCMP officers' hair purple/orange and blue, respectively.

Even though Cpl. Seafoot tried his best to wash the bright blue out of his normally white hair, he could only get it to go a beautiful shade of baby blue. It didn't make life difficult for the Corporal, though. In fact, it seemed to make things easier.

That night, the RCMP received a call to deal with an intoxicated, often violent, and very strong man. They approached the man, but instead of attempting to fight, like he normally would, he just stood and stared and Cpl. Seafoot's baby blue hair.

"Oooh, pretty," the man muttered as he was handcuffed and lead to the police truck. He stared at the blue hair all the way to the holding cells. It was possibly the easiest time any RCMP officer ever had arresting this man.

This was told to me after the fact, of course, but I tell the story not as an excuse to reminisce, but to highlight the fact that hair modification seems to be a popular technique to raise money.

Take my friend Jason, for example. 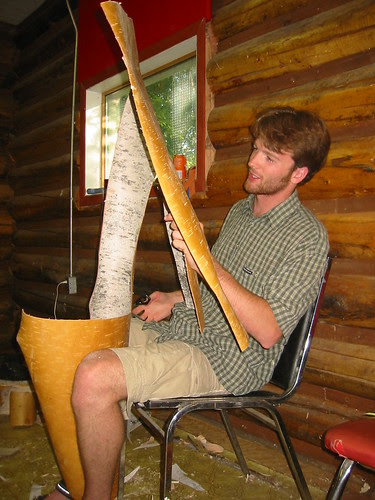 Jason, making a birch bark basket, years ago, in Fort Liard.
I haven't seen Jason for a couple of years, and was unaware that he was growing his hair out. His original intention was to donate his curly locks so they could be used to make a wig for someone undergoing cancer treatment, but he didn't stop there. He used the de-locking as an opportunity to raise money for the Canadian Cancer Society. He raised $2,424.

And he ended up with a killer mullet. 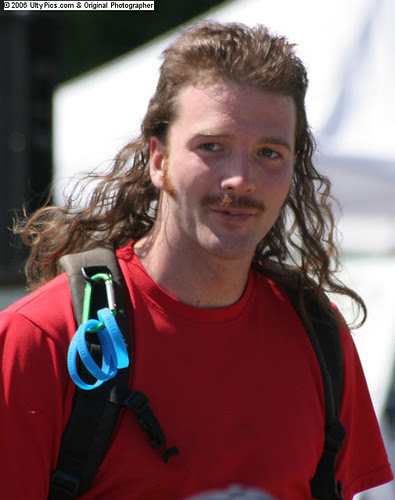 So to all those who engage in hair modification to advance worthy causes, my hat goes off to you!

Oh man, that thing is sweet. I'm so jealous. Too bad the wife insists she'll leave me if I ever get one....

What about negotiating some sort of Mutual Body Hair Growth & Maintenance Agreement?