Some roads are meant for getting from A to B. Some roads are meant for fun driving - even if that wasn't their original purpose. The Canol "Trail" was meant to get oil from Norman Wells to Whitehorse. Horribly over-budget, the pipeline lasted for about a year, but the legacy is an awesome adventure road with some neat old trucks on the side. 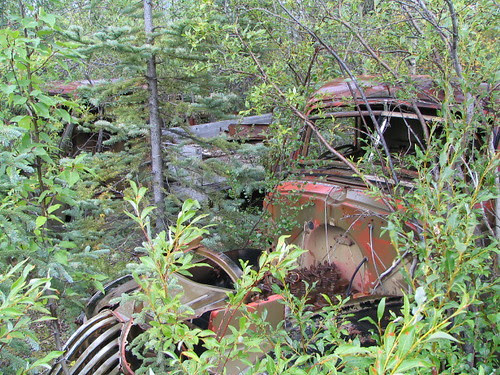 "A good truck for in the bush."
My Mom, Dad, Nanuq and I headed out on Friday afternoon. I brought my laptop along and managed to do a bit of work on the way to Johnson's Crossing. It wasn't yet the weekend, after all. Turning north on the southern section of the Canol, we proceeded through some beautiful country. We made frequent stops, here and there. We watched salmon spawning in Sydney Creek and skipped rocks for the dog to chase at Quiet Lake. It was overcast and drizzling, but the scenery was still gorgeous. I savoured the fact that Quiet Lake wasn't full of million-dollar cottages and roaring motor boats, like it would be anywhere in southern Canada.

We also stopped at Rose Lake and this great set of waterfalls, as we proceeded ever northwards towards Ross River; our destination for the night. 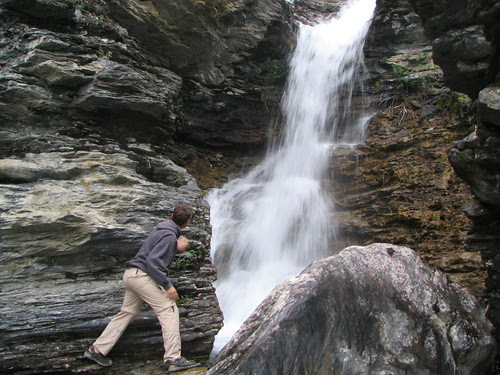 The road was winding as it bobbed up and down over creeks and along mountain sides. It was getting late and when we pulled into Ross River, the hotel was closed. I would have been quite happy to sleep in the tent, but my dad had made arrangements before we left and was able to get the key to the room.

The room was hot. Sweltering hot. We couldn't locate the source of the heat, which seemed to come from everywhere and nowhere. To make sure we didn't bake ourselves alive, we left the door, which opened to the second-floor balcony, ajar. In addition to letting some much-needed cool air into the room, it also gave us the the opportunity to listen to the sounds of a Ross River Friday night.

We made a stop at the Stuporstore before we left Whitehorse to get some groceries, since we knew that everything would be closed by the time we got into Ross River. The plan for dinner was to have pasta and tomato sauce. A good plan as long as you remember to get the pasta. Oops! (Not my fault, and the individual responsible shall remain nameless unless someone chooses to post a comment asking who the culprit was.) Instead we improvised and had buns with tomato sauce, which was surprisingly filling.

The tomato sauce was cooked on this wonder of modern 1970's technology - the Stovifreezifridgisinkerator (Which may or may not be the actual name of this amazing appliance). 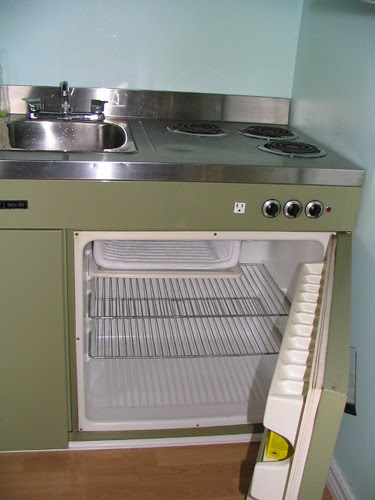 "The Stovifreezifridgisinkerator"
Up for breakfast at the hotel's restaurant (There's nothing quite like dining beside a stuffed lynx), a stop at the store for some gas, and we were on our way across the Pelly River on the cable ferry. We didn't know what to expect of the North Canol, but found the surface to be in pretty good condition. We passed dozens of rabbits and dozens of grouse, and dozens of flickers, but saw no large game.

Because the sky was overcast and drizzling, there wasn't much scenery visible. The willow growth on the roadside hindered the views even further. For the most part, the North Canol was even windier and twistier and narrower than the South Canol, which made the driving even more fun.

We stopped to examine some old trucks by the side of the road, left behind after the construction of the Canol pipeline, and I spotted what looked like small tracks in a bluff of upended mudstone. Since spotting tracks in stone seems to be happening to me fairly frequently lately, I asked my parents to confirm what I was seeing. While it's not conclusive, they both agreed that what I saw looked like a trackway. 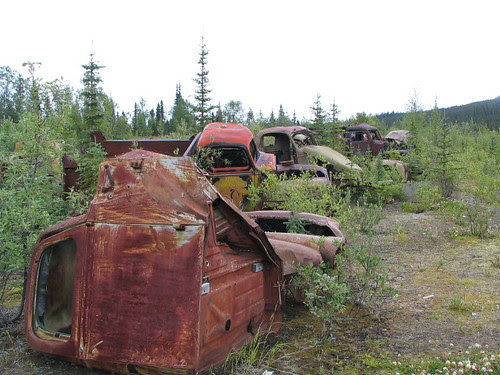 "The North Canol has more truck models than your local dealerships!" 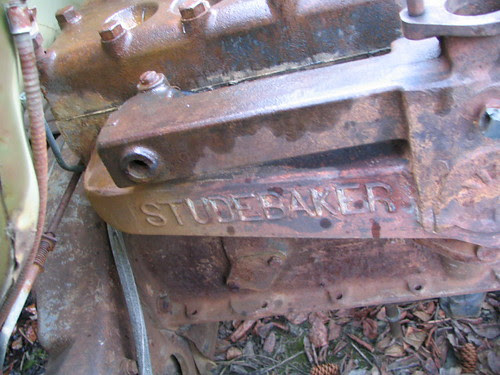 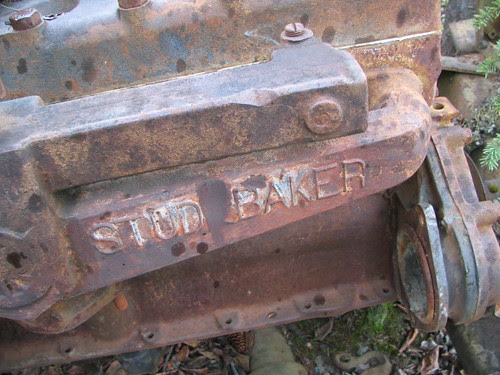 "...and if the guys working on the project took the time to file the "E" off every other engine, possibly the reason why the Canol Pipeline was horribly over budget."

In the best-case scenario, we hoped that we could reach MacMillan Pass and be back before the ferry stopped running at 17:00, but knew that this wasn't likely, especially with the rain, which was quickly causing the road to deteriorate.

We headed north, aware that our turnaround time was drawing near. Our new plan was to stop and spend some time at the MacMillan River, but, as we drove, we realised that wasn't likely going to happen either. We turned around and headed back. We didn't get much further than Boulder Creek, the sign for which was representative of most of the road signs along the road, but the bridge for which was not representative of the other fine bridges along the road. 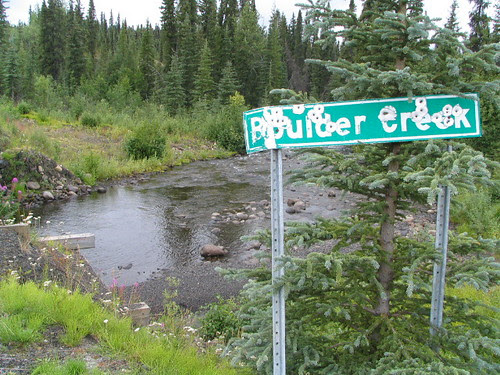 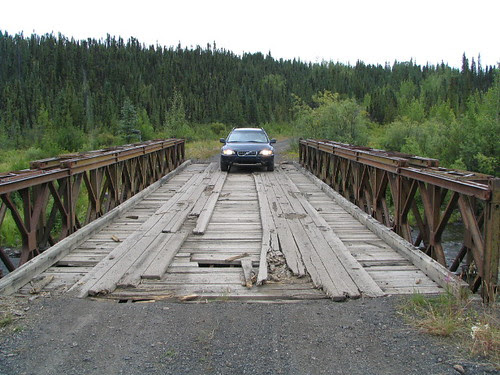 "Like a troubled bridge over water..."
Yes, those really are holes in the bridge. The bridge was possibly the cause of this... 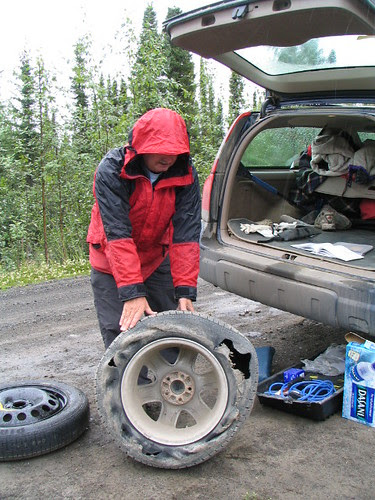 "My rear left tire: now with more holes than the Boulder Creek Bridge!"
Jacking the car up made me realise that, while the vehicle already has great ground clearance, it could be even better... 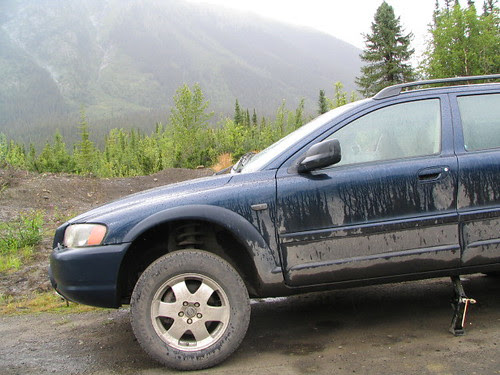 "Sweet."
Anybody out there into customization?

With the spare tire on the car, we proceeded back to the ferry, now really wondering if we would make it back before it stopped running for the day. Our planned leisure time was gone, which made us feel bad for Nanuq, who was usually as low to the bottom of the car as he could get, and insisted on shoving himself into the footwell of whomever was sitting in the back. 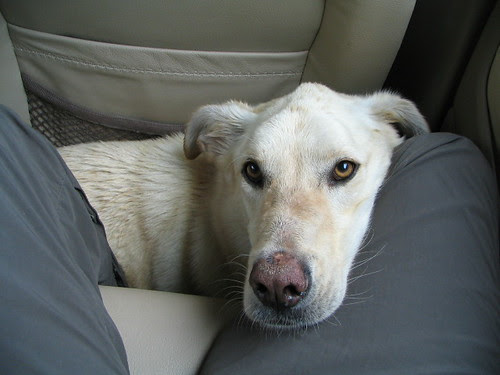 "Nanuq wedges himself in the back seat."
There was lots of traffic on the road on the way back, and there were also lots of puddles and mudholes. We didn't have any problems navigating those, however, and made it back to the ferry in time.

May parents and Nunuq walked across the old suspension bridge while I drove the car across on the ferry. 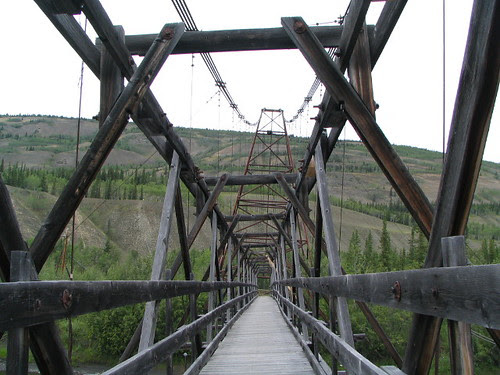 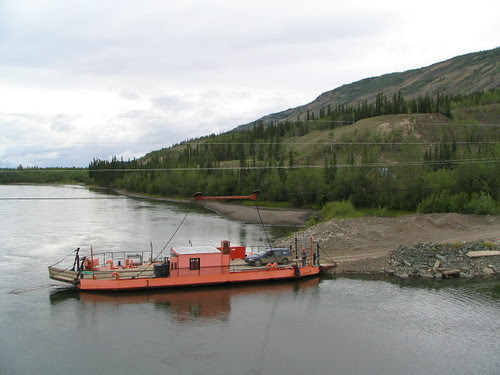 "The cable ferry."
We headed for Mayo that night, at a blistering 80km/h, stopping only to enjoy the fantastic views of the Lapie Canyon. The Lapie Lakes and River was named after a trapper from Fort Liard who helped guide a factor from the Fort Liard Hudson's Bay Company post through the area, way back when. 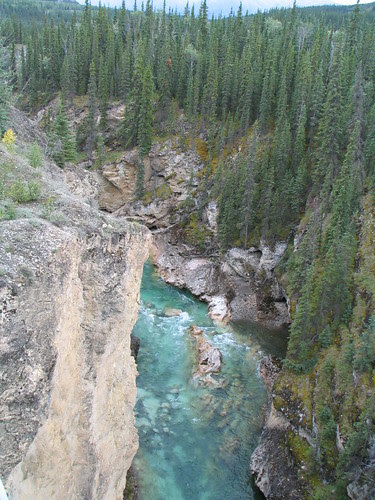 "One of the canyons on the Lapie River."
The next day, we were back in Whitehorse. The trip up the Canols made me realise something; you need a lot more than two days to get the most out of these northern road gems. For the next trip, I'll allow a lot more time for exploring.

Awesome trip report Michael!! I've been wanting to make that trip for a long time now, and now, it's like I've been there - minus the flat tires!! :)

I remember the Stovifreezifridgisinkerator from a motel I stayed in near Cavendish on PEI. Yep, it was the 70's.

I can't believe that your dad actually got his hands dirty!

Of course, as I read this, Stan Rogers' song 'Canol Road' (http://www.ifred.ca/stanrogers/chords/canolroadtab.html) came to mind. Glad that your trip had a different ending.

So, the real question is, did you see any Baked Studs?

I lived up there for years, back in the 70's and have travelled the north and south canol many times. Very beautiful place! You need much more time to fully appreciate the area. Also, carry a couple of spare tires, and some extra gas to go the distance. Looks like ya drove a few miles on the tire before stopping.

ripkirby, you're right on all counts. The highway was pretty soft because of the rain, and it took a while before I noticed the tire was, indeed, flat.

Nice trip report. And like Uncle Al, all I could think of was that Stan Rodgers song as well. ("...but they hit the four wheel drive in johnson's Crossing; Found him 38 miles up the Canol Road. In the Salmon Range at 48 below." Summertime sounds lots better!