Back in Whitehorse
I spent the flight from Yellowknife to Fort Simpson chatting with one of my classmates, so I didn't get the chance to take in much of the view.

When the plane took off from Fort Simpson to Whitehorse, the clouds obstructed my view of the mountains so, once again, I contented myself by watching a cheap western on my laptop.

Fawn and Jade greeted me at the airport. Jade was so much more coordinated and aware! I don't know if she recognised me, but I like to think she did.

Fawn filled me in on everything that went on since I'd been gone. We took a little nap and then later that day I was back at the airport to wecome Chris, Jenn and their family, who came to visit us for a couple of days.

Our neighbour, Atlatl Mike, took us to throw some atlatls the first night of their visit. 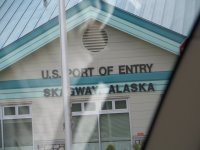 The next day, we were off to Skagway to ride the White Pass & Yukon Route Railroad. The WPYR has a special one weekend every spring where the trip is 75%. I expected the place to be absolutely packed, but it wasn't that bad. I later found out that the Sunday was "absolutely insane".

It was a nice drive down. I expected the border guy to be absolutely strict when we went through, which was fine because we had all our documents prepared. He just asked, "Are you here for the train?"

"Have a good time," and he waved us through.

We rushed to get our tickets and got onto the train just in time. We ran into Derek and his wife when we were about to get on the train and joined them in the same car. It was very nice to meet her. 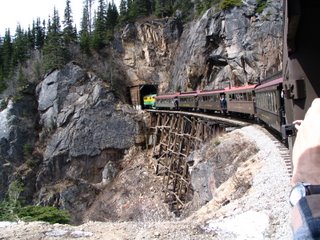 Entering one of two tunnels. 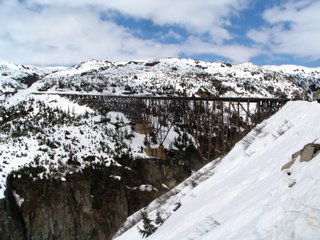 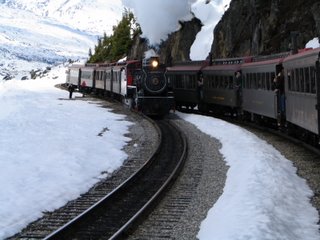 A steamtrain coming the other way. A beautiful piece of machinery. 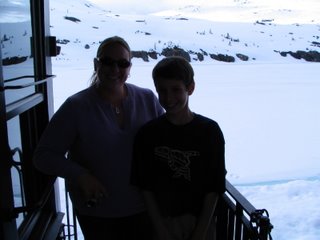 Jenn and E enjoying the ride near the summit. 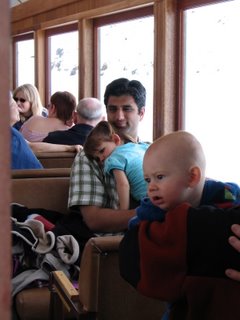 Chris and K enjoying the warmth of the classic rail car. 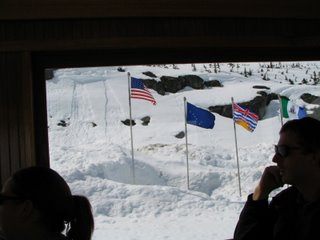 The border at Fraser, BC.

We also did a little geocaching while we were there, but it was difficult to get to a couple of the caches because there were so many people there. One of the caches was a virtual cache, but certainly worth checking out. 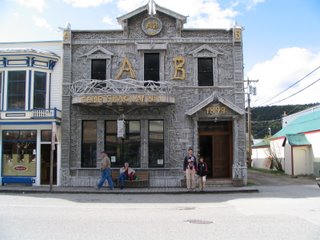 We also wandered through some of the shoppes, though most of them were closing up for the day. 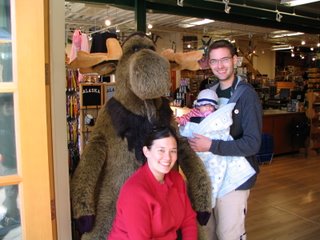 "Hey! This is a lot bigger than the ones I've got in my room." 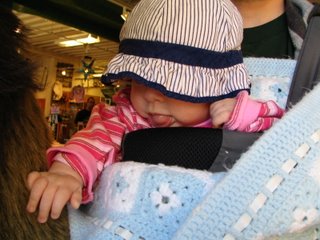 And Back Again...
The next day in our action-packed weekend was a trip to the Takhini Hotsprings and then the Beringia Centre and then a bit of geocaching before they headed to the airport for their red-eye back to Oakville.

It was a long weekend and Monday finally gave me a chance to relax, but I spent the day gardening instead. That evening, we received a call and several messages that a friend of ours in Fort Liard had passed away unexpectedly.

Clarence Harrold, affectionately known as "Chub" or "Chubby" worked for the Hamlet, operating heavy equipment. He was the kind of guy that liked to complain and act crochety, but it really was an act. He was the type of guy that liked to help out in his way and you could always count on him being there when you needed him. Among other things, he was watching our Fort Liard house all winter, making sure the furnace kept running. Chubby had a huge heart which, unfortunately, it what took him from us. He had a massive heart attack while on a weekend trip to Grande Prairie. He was not the type of guy you can replace.

On Tuesday, I made sure it was OK with work that, after being out of the office for two weeks already, that I could leave for the rest of the week to attend the funeral service. They were wonderfully supportive.

And Gone Again...
That night, after making some arrangements (Fawn doing most of the preperations), Fawn, Jade and I hit the road for Fort Liard.

We got into Watson Lake late that night, or rather very early the next morning. It took a bit longer travelling with the baby, because we had to stop along the highway for the occassional feeding, but Jade was wonderful the whole way. 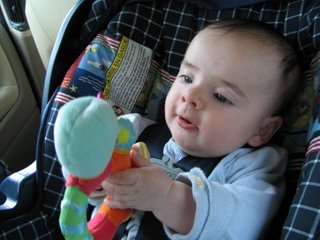 Jade examines a toy on the drive to Fort Liard.

We stopped in Fort Nelson and ran into a few Fort Liardians. About an hour outside of Fort Liard, we had to stop to feed Jade again. Several cars, all full of old friends, stopped to visit as they passed us. While they were happy to see Fawn and me, I think they were all happier to see Jade.

The leaves in Fort Liard were a lot more advanced than they were in Whitehorse. They don't call it the "Tropics of the Territories" for nothing.

Mike and Melanie were kind enough to let us stay with them. They had a baby boy a week after we had Jade. I saw their son two months ago. It was neat to see how much he's grown. He looks a lot like his dad. 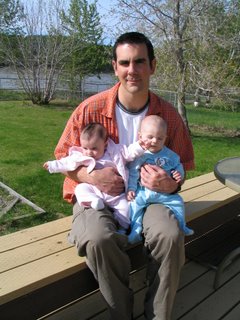 Jade and Mike and W. 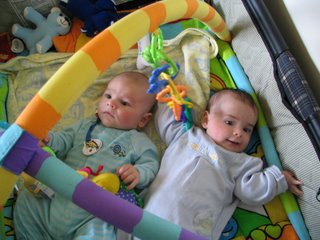 Meeting in the playpen. 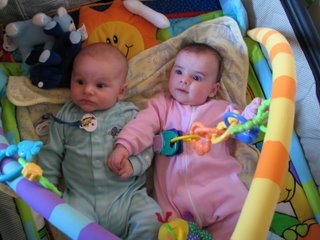 Holding hands in the playpen.

The evening we arrived, I took a walk around town and visited with friends. Some of the kids were a lot bigger, but some hadn't changed at all. While there weren't many physical changes, a lot has changed. And a lot was still the same.

The next morning, Fawn, Jade and I took a walk around town. Our visits were brief, but we got to see a lot of people. Chub's service was that afternoon. There was a great turnout, which speaks to how much he was respected. After the service, there was more visiting and then an "early" night.

The next morning, as the rain drizzled down, we got back on the road for the 14 hour drive home. 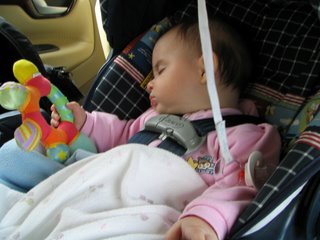 The drive went fairly quickly, and the stops to feed Jade seemed to help refresh me for the next leg of driving. In between Liard River and Upper Liard, the weather got sunny and warm. We stopped at a lookout, with a nice view of the Liard River. 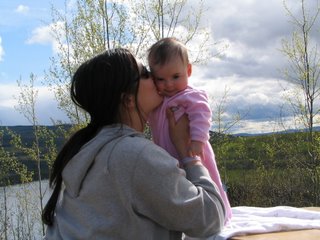 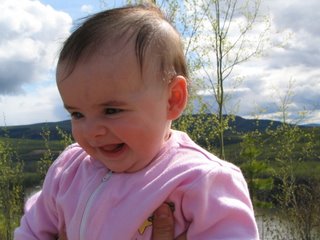 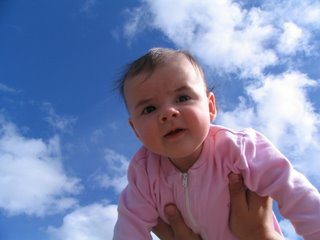 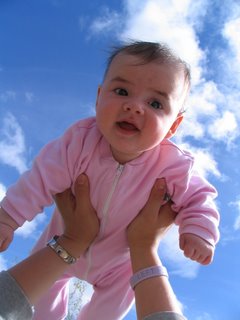 We had driven so far and it was hard to belive that the river flows right by Fort Liard and then on to Fort Simpson where it meets the mighty Mackenzie. I canoed the leg from Fort Liard to Fort Simpson in two days of hard paddling. How long would it take to canoe from that lookout to Fort Liard, though the canyons and rapids? My imagination went wild with the thought. In my head, as I held Jade so she could see the view, I started planning my trip. 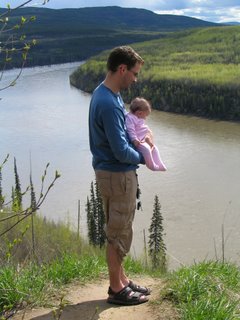 Imagining a trip down the Liard. 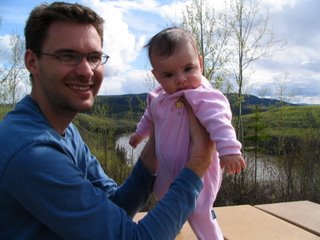 Enjoying the sun and taking a break from driving. 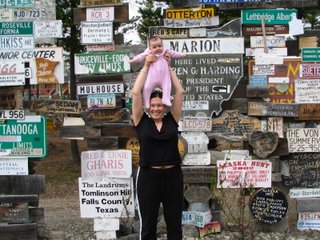 And Back Again.
We got back late that night, but not before stopping in Teslin for some dinner and a quick call to my Mom to wish her Happy Birthday. It was a long drive, but it was worth it.