And yet another guest gets hooked on geocaching.

The day after we got back to Whitehorse, our friend Lara arrived from Calgary. Yup, things have been pretty much non-stop for the past month.

Although she went and did a bit of shopping with Fawn, all Lara and I have done since she got here is go geocaching.

Our first trip was up Grey Mountain. It was cold and blowing and there were thick chunks of ice on the alpine plants. It was the kind of wind that gets into your ears and makes them hurt. Nanuq, however, was having a ball chasing ground squirrels. We tried to float over snow patches and keep out of puddles.

We found the cache, but the container was "in a cavern", under half a foot of water and frozen in ice under that. Even after reaching in and fumbling around in the water, I was unable to retreive the cache. I suppose I could have tried harder to hack the cache loose with my hatchet, but it was hard to reach (I couldn't hack and see at the same time) and I didn't want to put a hole in the fully submerged container. Plus, my hand was numb and about to fall off.

Instead, we headed down off the mountain to try an easier cache. Alas, I should have read the notes from previous geocachers more closely - this one seemed to have gone missing.

We made one other attempt that day at another cache; a brand new micro-cache. And we were the first people to find it! Lara seemed thrilled. I think she got hooked then and there.

But there was more caching to come. 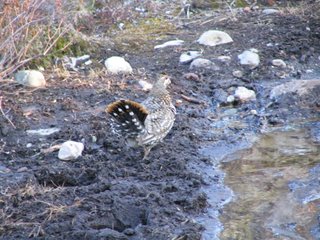 Last night, we headed up the mountain by Fish Lake. The trail is often damp, but we got our feet soaked by the spring run-off. The trail was a lot easier to hike without an overnight pack and it the hike by quickly.

Above the treeline, we enjoyed the spectacular views and found the cache. The loot in this cache made Lara's eyes open wide! If I could have read her mind, it probably would have said, "Oooh! I want that!" but the first rules of geocaching is that if you take something, you must also leave something behind.

She took a Travel Bug to place in a cache in Calgary and left behind a nice pen. Taking a Travel Bug is like making a commitment to geocaching; the travel bug must be placed in a new cache somewhere else.

We spent a bit more time walking the ridge before descending the mountain. Although it was getting dusky, we decided to try one more cache along the Fish Lake road. We found it quite quickly, but the cache wasn't the reward - it was the location.

The cache was located near some steep bluffs overlooking a fantastic view of a creek. Below, bald eagles were perched on trees and soared in the valley below.

I might never have stopped where we did if it hadn't been for the cache. Once again, geocaching took me to a great place I might not have known I should visit. What a great way to explore.

Don't blame Lara, E is hooked for sure. (And C has to remind me that it is not my GPS!)

That fish lake road cache is great... How man times have you driven past that area not knowing what was on the other side of the trees?

Driving in each direction? A gross at, least.