"I want a bell for my bike!" Jade announced.

"After you learn how to ride without training wheels," I replied.

I knew it wouldn't be a simple task.  When I said it, Jade still had some lingering balance issues.  At the time, we weren't 100% certain if the balance issues were because of epilepsy-related complications or chronic inner-ear infections.  Still, her balance was improving and she seemed eager to learn how to ride.

Most of the time, anyway.

We started with training wheels.  I raised the wheels higher and higher and encouraged her to lean from side to side and then try to ride in the middle so the training wheels wouldn't touch the ground.  Most of the time she listed to port like a holed schooner.

"Can I have my bell now?" she would ask.  A big, squeaking frog, it sat there, tantalizingly, on the kitchen table.

"When you ride your bike without training wheels," I reminded her.

Then Fawn bought a Gyrobike Gyrowheel.  The wheel was four times the cost of her bike and when I heard about it, I winced.  The Gyrowheel is a heavily-weighted gyroscope that helps the bike stay upright at low speeds.  The company claimed it would make learning to ride much easier and with fewer falls.  Money down the drain, I figured.  An expensive gimmick, I thought.

Almost right away, though, Jade started developing good riding technique, understanding how to lean and turn properly.  It all seemed very intuitive to her with the Gyrowheel.  Very quickly, she unlearned all of the bad habits that she had developed with the training wheels.  After a couple of short rides on the Gyrowheel's highest setting, I let go and she was riding on her own.

She stopped almost immediately.  I'd get her going, let go, and she'd stop again.  She kept stopping, only ever riding ten feet at a time.

"Why do you keep stopping?" I asked.

"I want to you hold onto my seat."

I pretended to hold onto her seat, but didn't.  She couldn't tell.  After we had ridden all the way down the street I told her that I wasn't holding on, she was surprised and very impressed with herself.

"Papa, I rode my bike without training wheels.  Can I have my bell now?"

In very little time, with the wheel on the highest setting, she went from being a Nervous Nelly who didn't want me to let go of the back of her seat to a giggling maniac, high on the power of riding on her own.  She started making tight turns.  She knew how to stop, but she would aim at the curb or ride for the ditch at full speed - just because she could.  My heart would race and I would pull muscles with sudden lurches forward to save her, but it was all pure hilarity to her!  I began to realize that somewhere inside my quiet, little child lurks a daredevil.  A real, honest-to-goodness daredevil.

After each round of riding, I lowered the power of the gyroscope.  If she ever noticed, she never said so. She just kept riding.

She only fell once, during one of her maniacal daredevil gigglefests.  A few tears were shed, a little sand was wiped off a knee and a hand, and she was on her way again within a minute.

This morning, I turned the Gyrowheel off altogether.  She was riding on her own!

And she got her long-awaited "bell"; that big, squeaking frog that sat tantalizingly on our kitchen table.  Together, we put it on her bike and then she rode off, squeaking her horn as she made her way down the street.

I think we're both pretty proud. 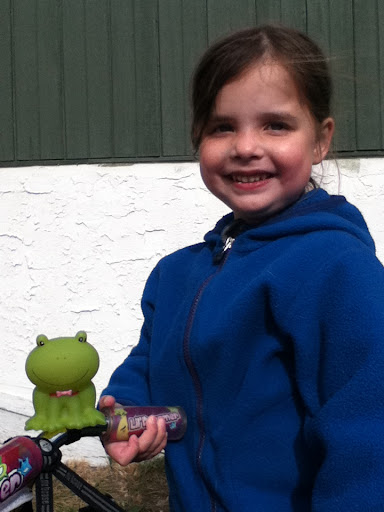 Bless you. Jade is so happy, having you and Fawn as parents.
I'm almost as proud as if I would be a Grandma...

How does one say "Grandma" in Sweeden?

Wow, what kind of a nerdy brain thought up that thing! What a nifty idea.

This gadget looks awesome! I am daily lamenting Evvy's rickety training wheels and the clackety sound they make (not to mention how they CAUSE her to fall around corners). Where, oh where did Fawn find one of these?

I bought mine at ThinkGeek . They're a very fun company to order from! You do have to keep in mind that you'll get a bill later for the duties. I think that was about $12.