I'm in Wrigley, NWT right now. The day before I left, Fawn, the kids, and I got out for a sail on Lake Laberge. We headed up the lake: There was a trailhead that I wanted to scout out.

I did some of the sailing and Fawn did the rest.  The kids kept themselves entertained down in the cabin, except for a few times when Halia came up into the cockpit to feast on some delicious cherries.  Of course, this required me to take the seed out for her and the best way to do that is to make funny-looking faces so my wife can take pictures of it. 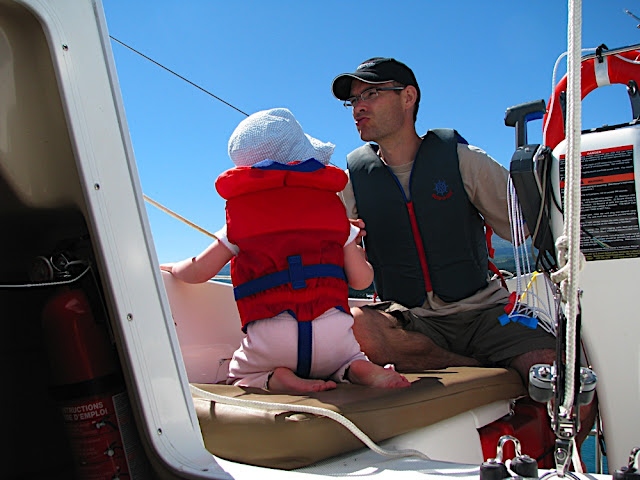 The wind, coming from the north/east was good, but we didn't quite make it to where I wanted to go. Instead, we stopped at a little beach along the way - one where we wouldn't normally be able to stop (because of waves) if the wind were coming from the south like it normally does.  Fortunately, the shore was sheltered from the wind and the water was glassy. 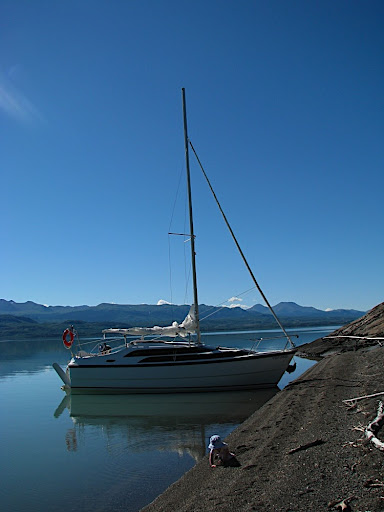 The beach, receiving the full force of the sun, was scorching.  We took to the water to cool our feet. 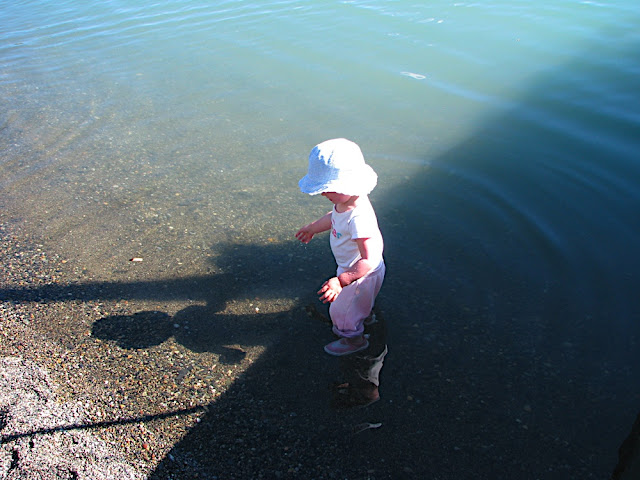 There were hundreds of pieces of smooth glass along the beach, in shades of white, green, brown, blue, and purple.  There were also other items of interest, like this old nail. 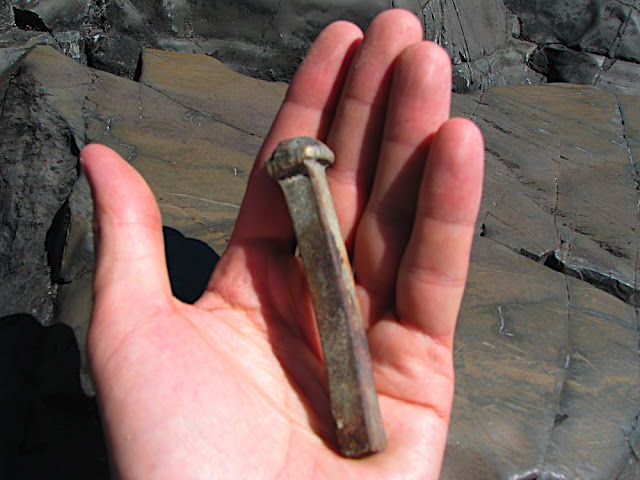 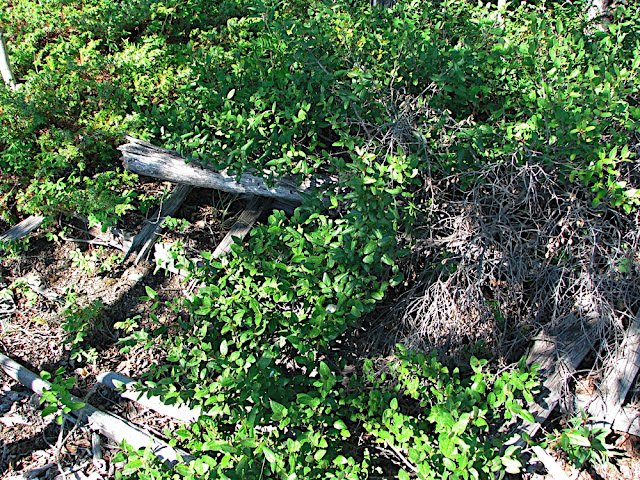 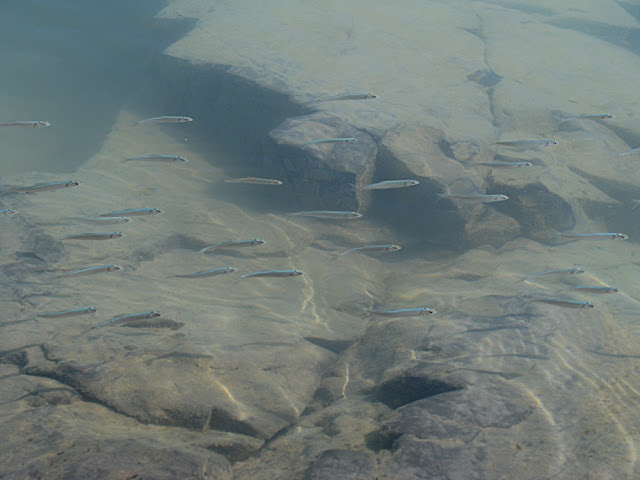 What interested me the most about the beach, though, were the large slabs of rock.  I'm not an expert, but the slabs looked fossiliferous to me. 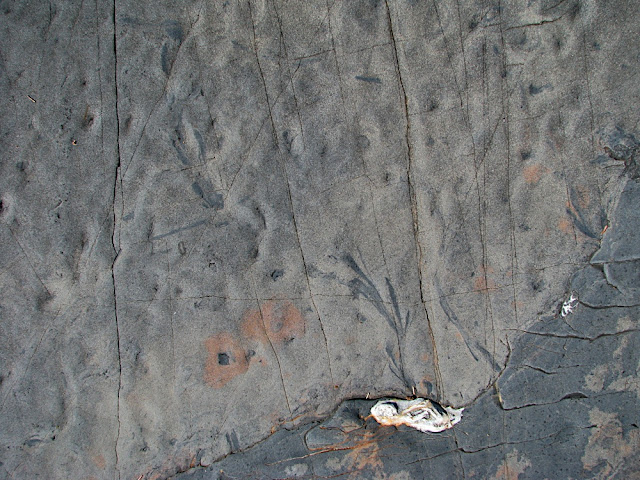 I love looking for interesting fossils, but I spotted something that got me even more excited than fossils can.  Again, I'm not an expert (and will be seeking an expert opinion), but if I'm not mistaken, those are (note where the hand in Jade's shadow is pointing)... 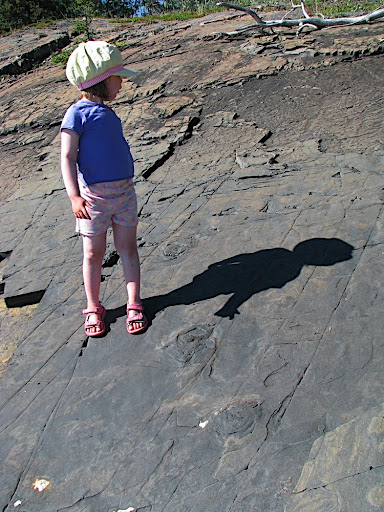 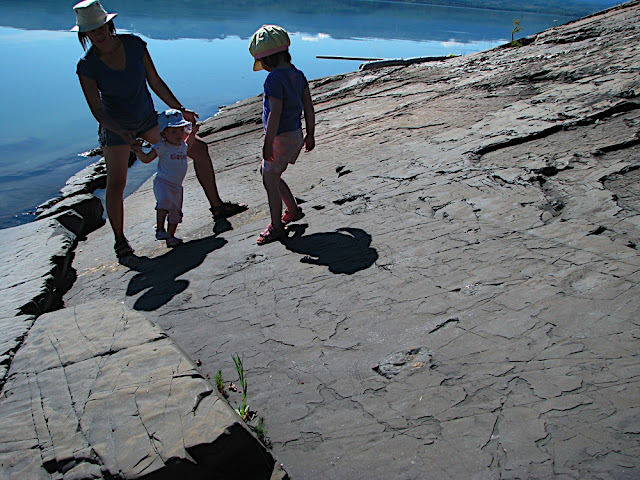 Fawn confirmed that I wasn't going crazy and that the marks in the rock did, indeed, look like dinosaur footprints.  On one print, the "toe" goes in one direction, with a mirror image on the other print. 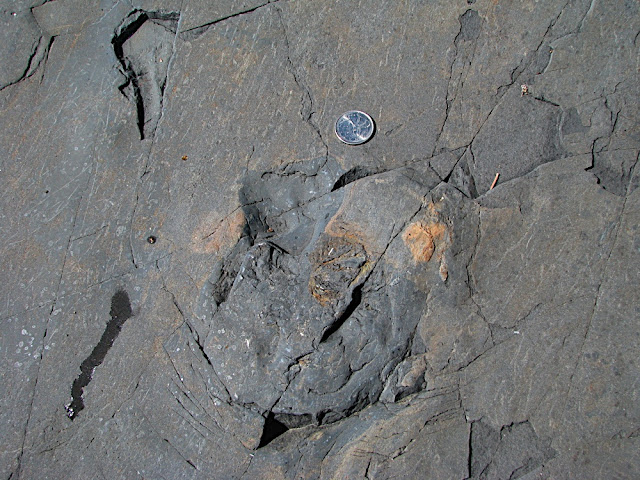 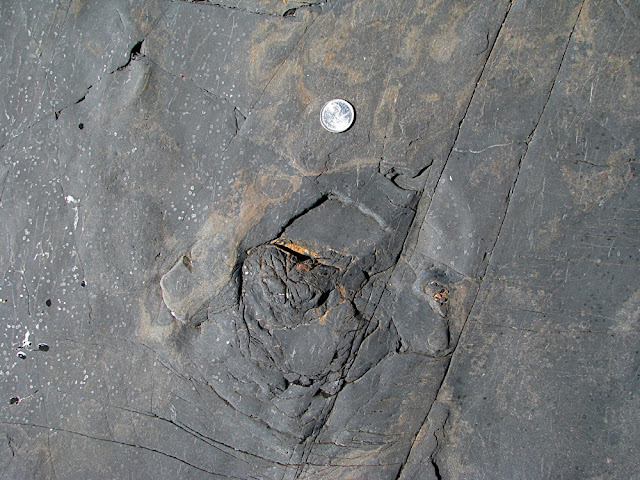 That wasn't the only trackway, though.  I am much less certain, but I think I also found a pair of three-toed dinosaur footprints in an adjacent rock slab.  The prints are much harder to see, but I could feel the three toes on each of the prints.  Fawn felt the rock and, again, confirmed that I wasn't going crazy. (Either that or she's humouring me.) 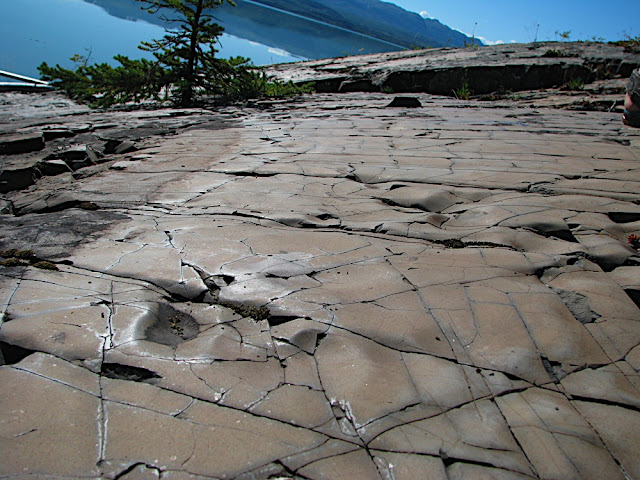 It was amazing what we found, considering that we started the day looking for something completely different.

After our beach explorations, it was time to head uphill to take in the views.  The sun beat down on us as we made out way up the south-facing slope.  Summer is in full swing in the Yukon.  Fawn and Halia munched on wild strawberries while Jade and I raced for the top of a knoll to see who would be the king of the castle and who would be the dirty rascal. 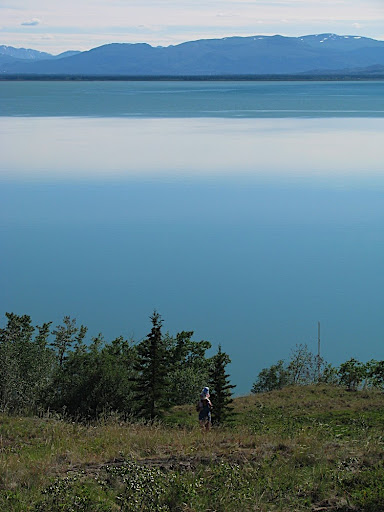 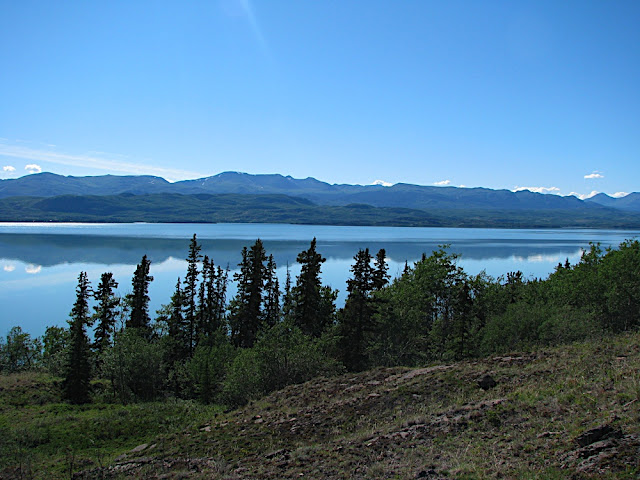 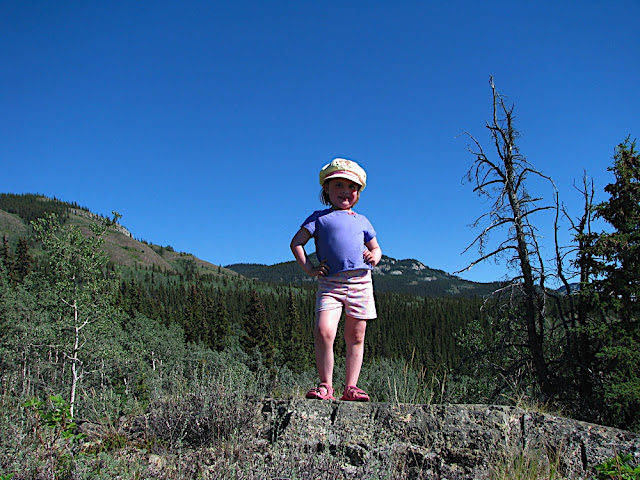 I'll let you decide who won.

What an amazing discovery Michael. Have you contacted anyone about it yet, to have a look?

They must have left quite the impression.

Of course, Little Jade won! Thanks for the beautiful photos.

Clare, I'll be notifying the appropriate experts, for sure.

I've got a feeling these tracks are really going to leave their mark on the area.

Fossilliferous? Is that a word? Can I use it in Scrabble? :)
I think you should collect those hundreds of pieces of smooth glass and send them immediately to me, so I can make some cool jewelry out of them. We spend hours and hours looking for them if we go to the beach (14 hours away!) during the summer, and count it a big score if we can find two or three!
This looks like an absolutely gorgeous trip you took - the sailboat, the lake, the hike, the skies. What a great thing to give your children.

Fossiliferous is, indeed, a word.

Hmm... what's the best way to send glass to the other side of the continent?

In a box....! Sorry;)! Wonderful photos and what a fabulous day and find. Enjoy the rest of your summer.
Smiles

- The fact that you and Fawn take the kids sailing all the time;

- The cherries and the strawberries;

- The last picture of uber-adorable and proud Jade, and that subtle hint of the teenager to come in the way she's posing.

Great photos! I agree with Scientific Chick about Jade's pose. She's such a "big girl".
Looks like a great place to take us sailing.
Hugs to everyone. Love, Mom