I towed the boat out to Kusawa Lake on Friday night. All day Saturday was a search and rescue training weekend. The training was great. We did a bit of orienteering, learned more about radio systems, Search and Rescue boat training, did some basic tracking training, and a short search exercise.

Sunday, we launched the boat for the first time this year. The Kusawa boat launch is excellent and we had no problems doing it with the minivan. Our friend, Derek, offered to shuttle Fawn, the kids, and Nanuq out to the boat in his Zodiac. It was fun and good practice to do the mid-water transfer. Nanuq, our ship's dog, handled it very well.

Because it was our first time out, I spent a little bit of time making adjustments. We ran for a little bit under the genoa and were sorely tempted to hoist the mainsail but decided that we would wait until the kids weren't underfoot or for the boomkicker I ordered to arrive. (The boomkicker keeps the boom from falling onto the deck and bonking the heads of little people.)

Just in case you're wondering, here are the official titles of our crew. 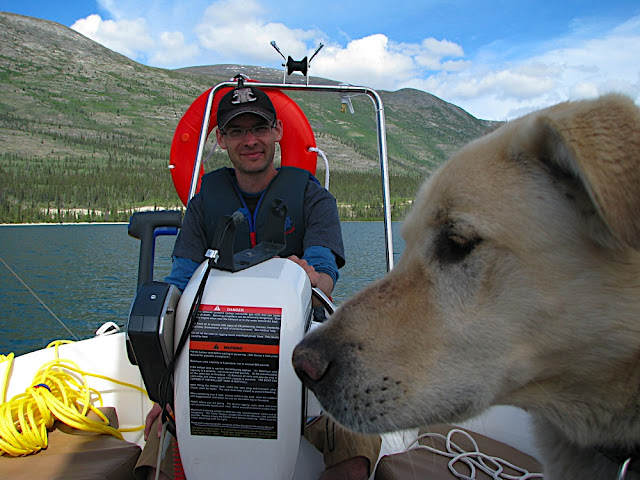 The Captain and the Ship's Dog. 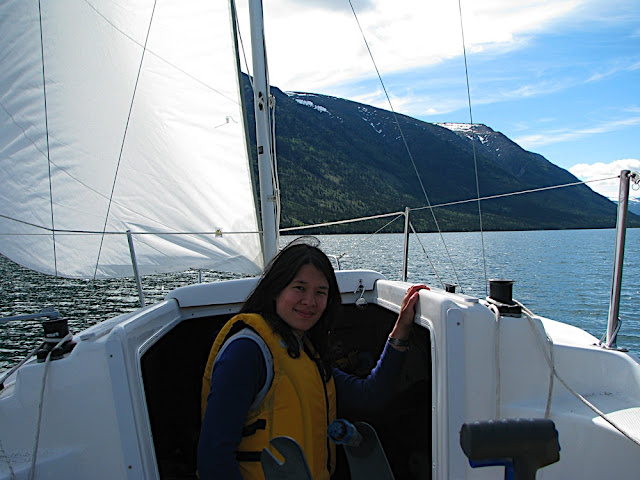 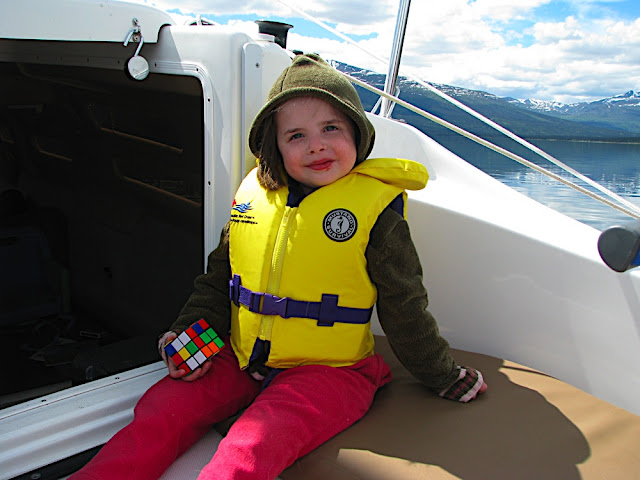 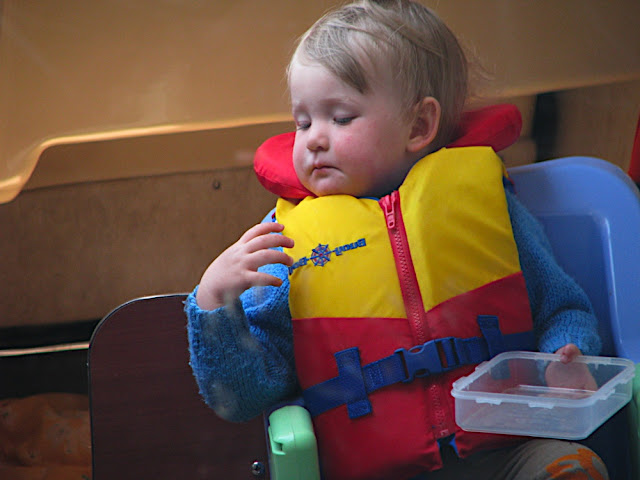 The Admiral. (If it looks a little distorted it's because this picture of the Admiral having a snack was taken from the cockpit, through the companionway, and in the reflection of the large cabin mirror.)

It was a glorious day, perfect for lazy sailing or comfortable motoring. The new outboard we bought last year was defective. They replaced the powerhead and we had to break the new engine in, so we spent most of the day under power. 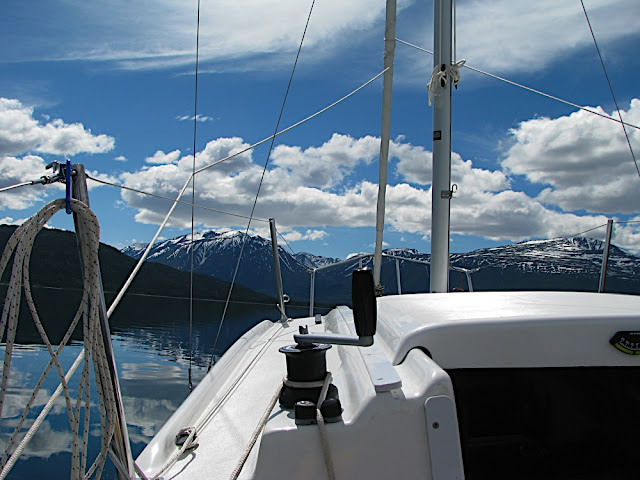 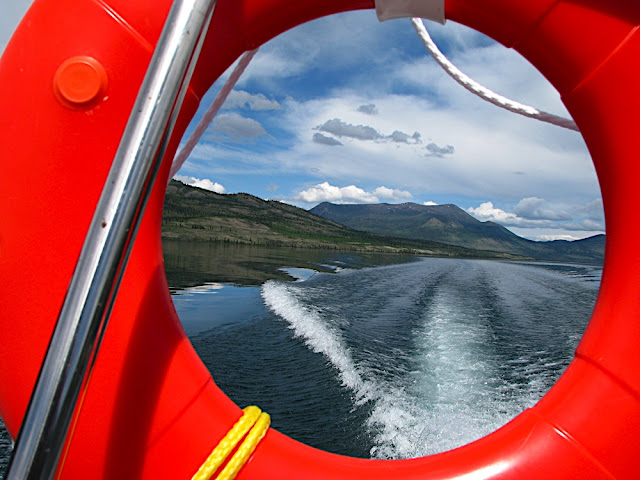 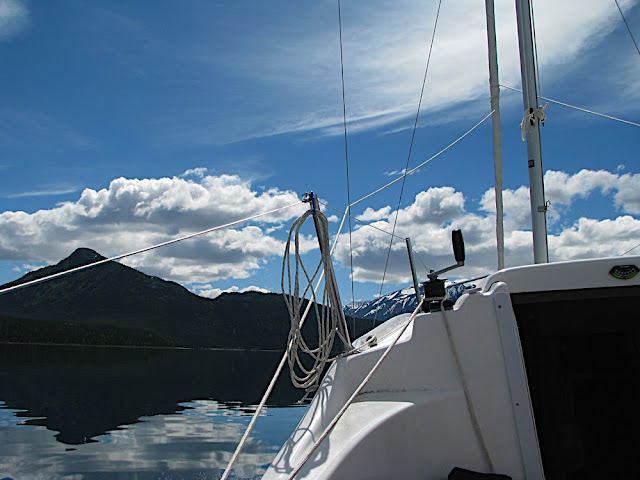 The lake was beautiful. We stopped halfway along the lake to relax and have some lunch. Jade and I dropped a couple of fishing lines over the side. I knew we wouldn't catch anything but it was fun to watch the lures fall deep into the clear, clear water.

As we fished, Nanuq started whimpering. He became downright annoying about it. Then, he let loose with a pool of diarrhea all over the stern seat cushion. The good news was that the mess was confined to the seat cushion. I was able to scoop the cushion over the side and rinse it off in the lake. It came out spotless and the fish got something new to eat.

The bad news was that there was more to come.

After the next load was gushed onto the port seat cushion and the whining continued, I figured it was time to head to shore. I consulted the topographic maps of the lake for a good harbour. Finding one that looked promising, we headed for a large bay.

The bay was beautiful, bathed in warm sunlight and fringed by dark rocks and light sand. We eased our way to shore and had a perfect landing. 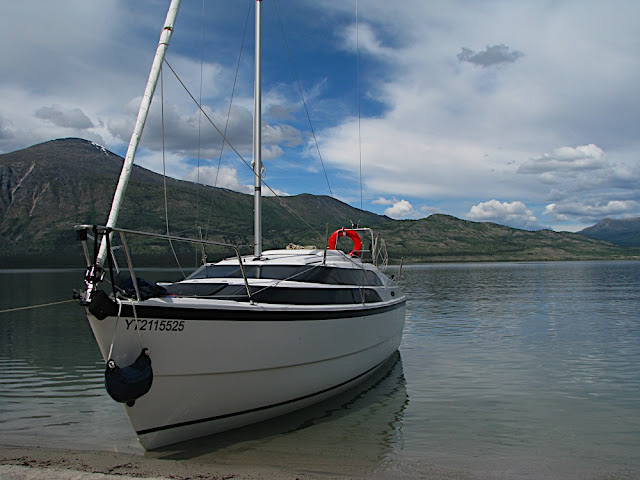 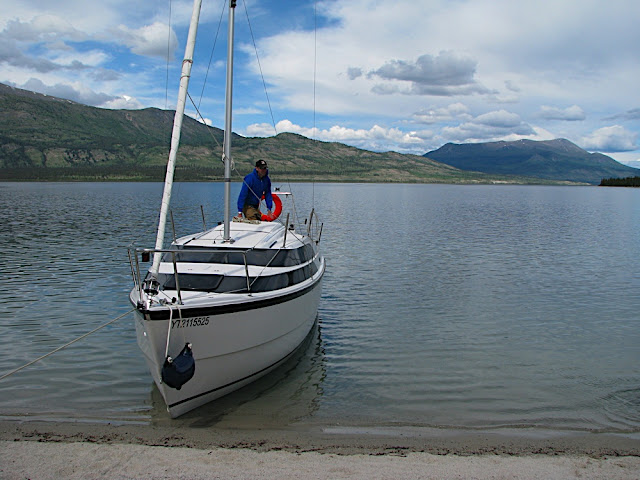 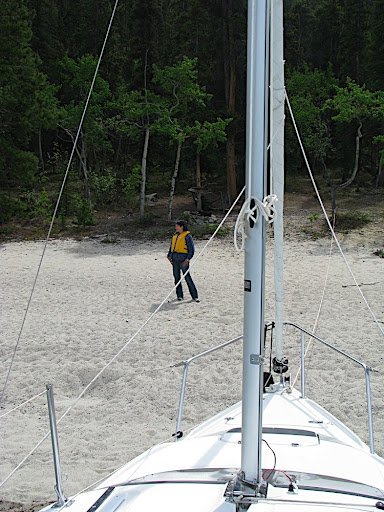 The First Mate after securing the ship to shore.
It didn't take long for the Able-bodied Seakid to start exploring the strange new land. She found some rocks, climbed on top, and declared herself the "King of the Castle" in true European explorer fashion. 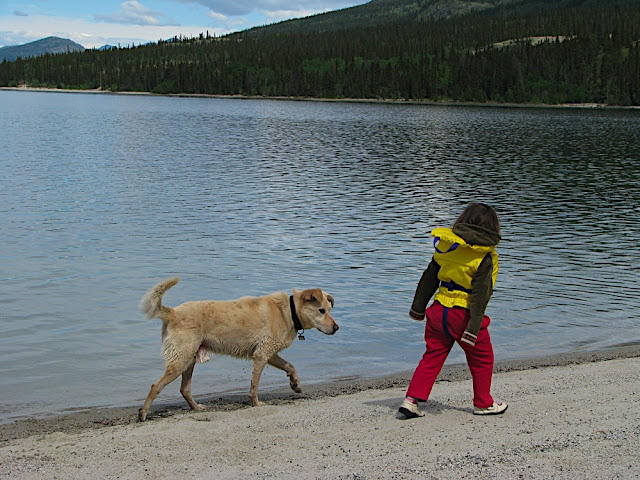 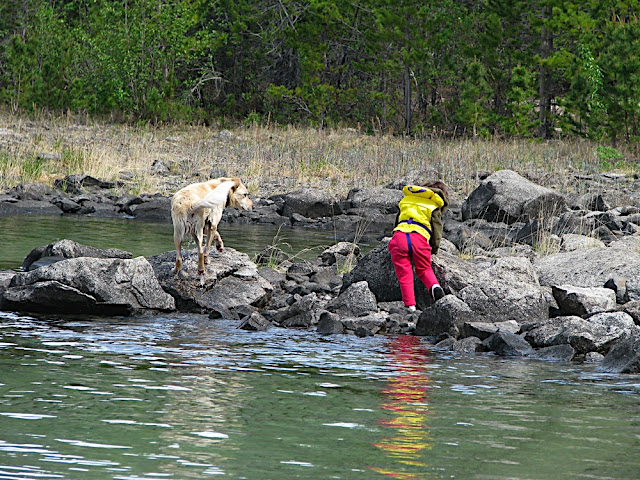 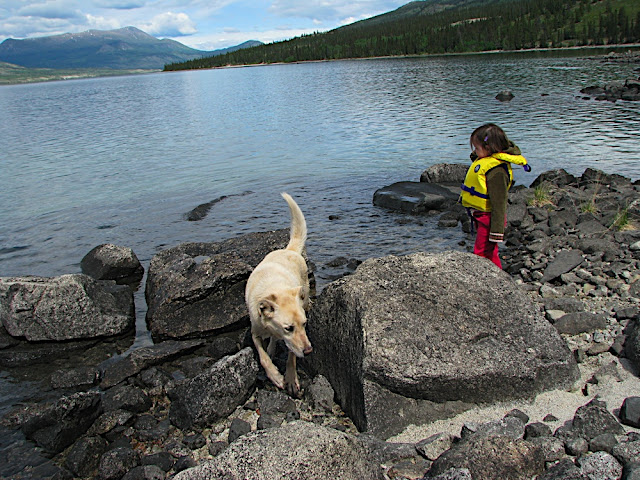 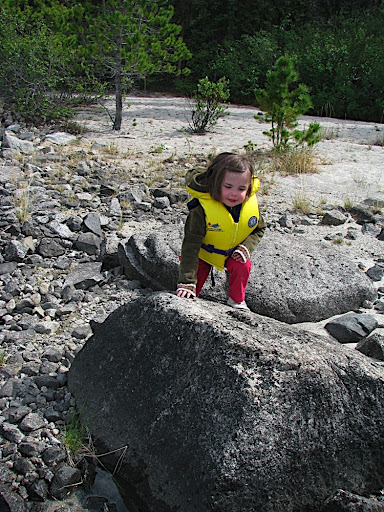 The "King of the Castle" 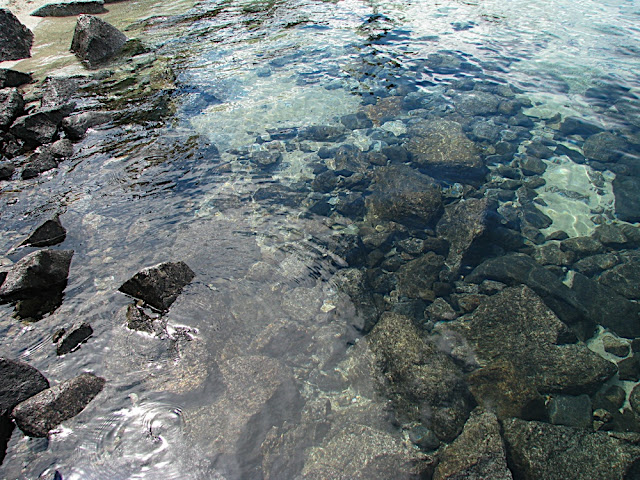 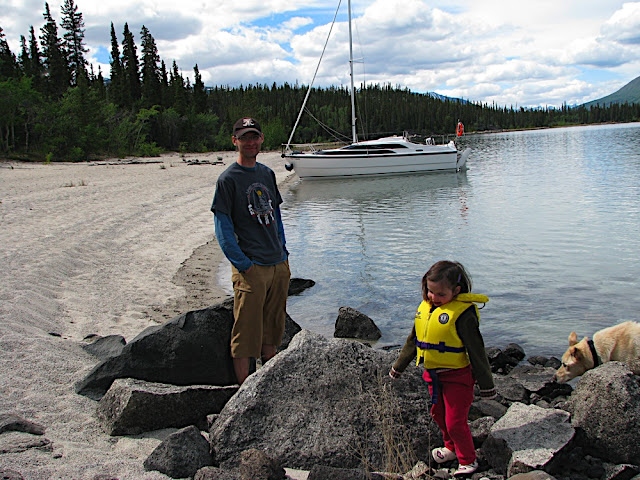 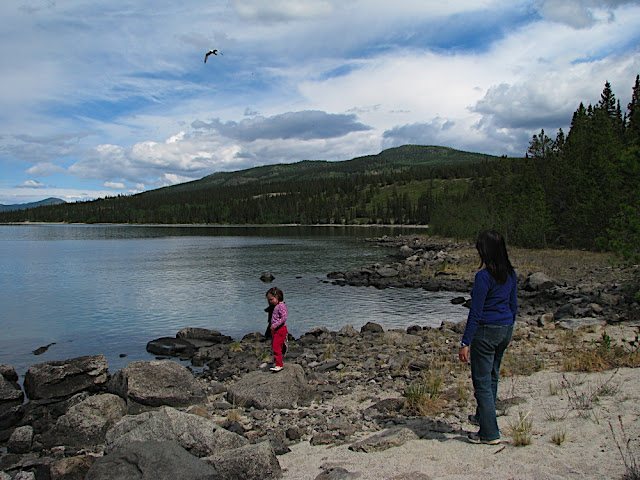 The Admiral napped while the rest of us had a snack on the beach. It was hot and it wasn't long before I was stripped down to my shorts, basking in the sun. We're in the Yukon, but everything felt downright tropical (less the humidity). It was perfect.

Before buying the boat, I had a notion about what it would be like. It was that ol' sailing dream: exploring distant lands and savouring the beauty of warm beaches and spending quality time with my family.

It was everything I hoped it would be. 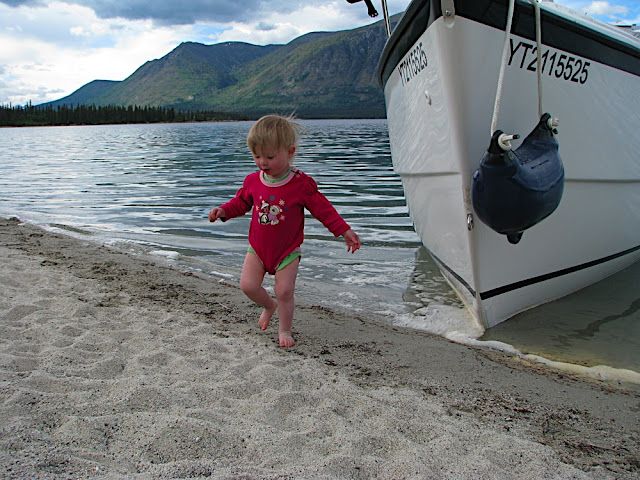 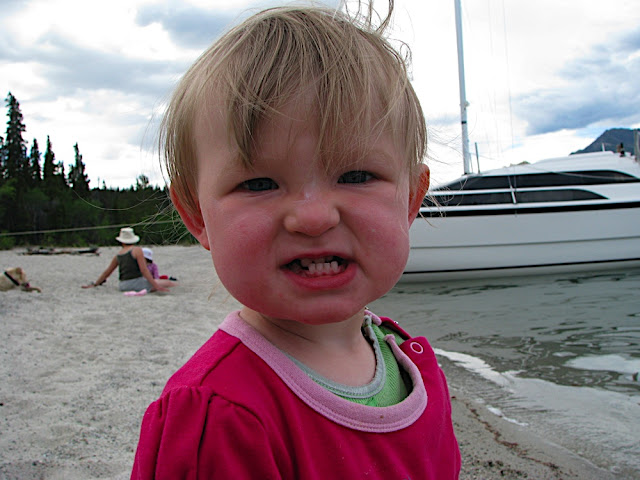 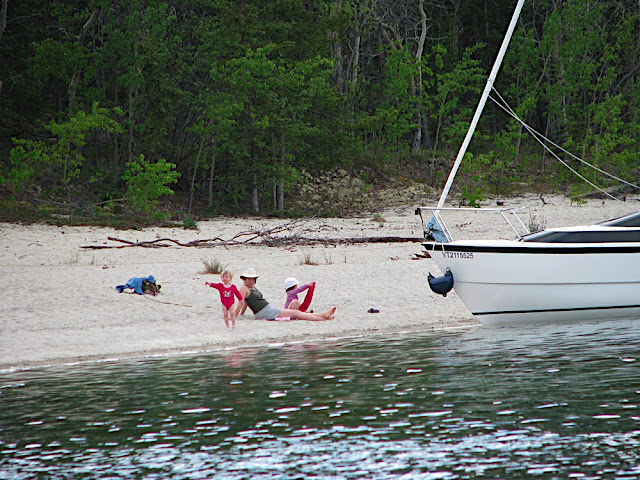 Basking on the beach... 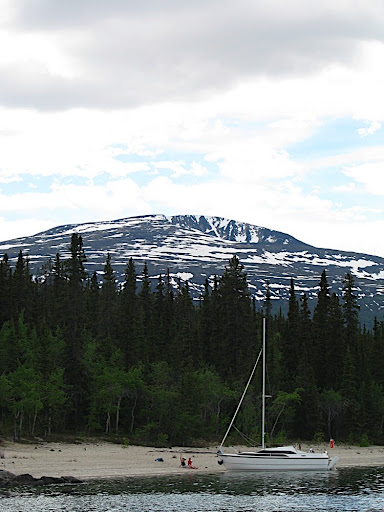 It was a great little bay and, although we pondered the idea of spending the night, we'd forgot to bring the dog's food. Instead we motored back down the lake toward the campground and boat launch. 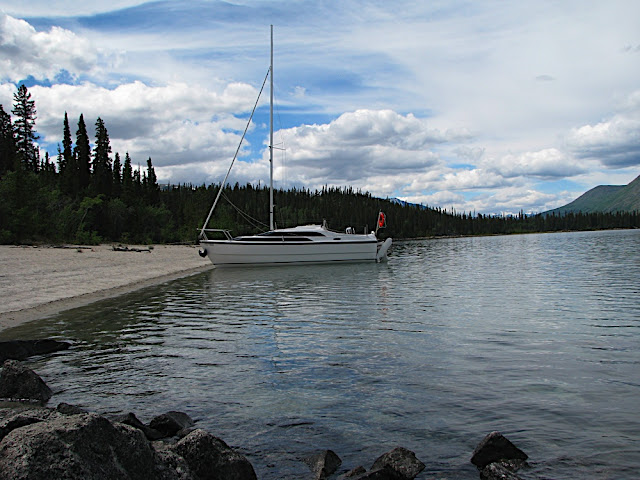 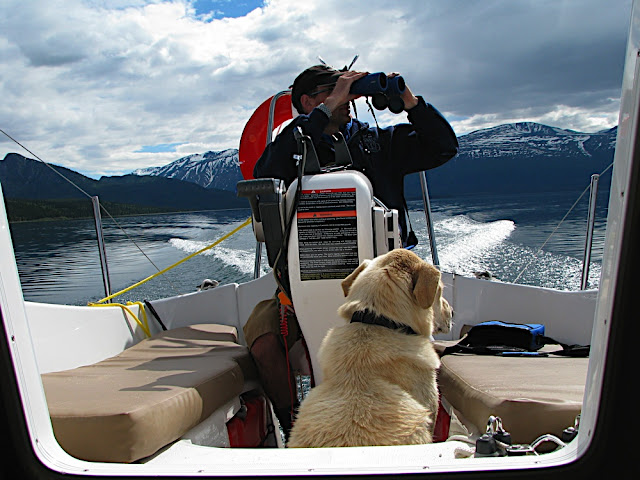 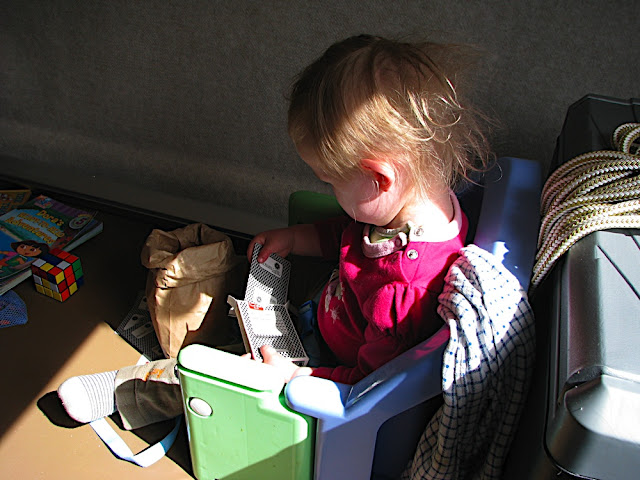 The Admiral, doing what admirals do best. 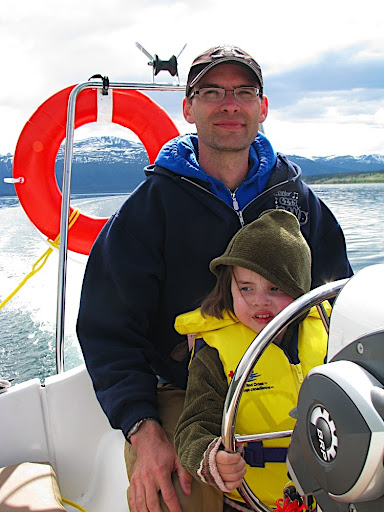 It was around suppertime when we pulled up to the campground dock. We had supper aboard and watched some trout feed on the carcass of deceased brethren. 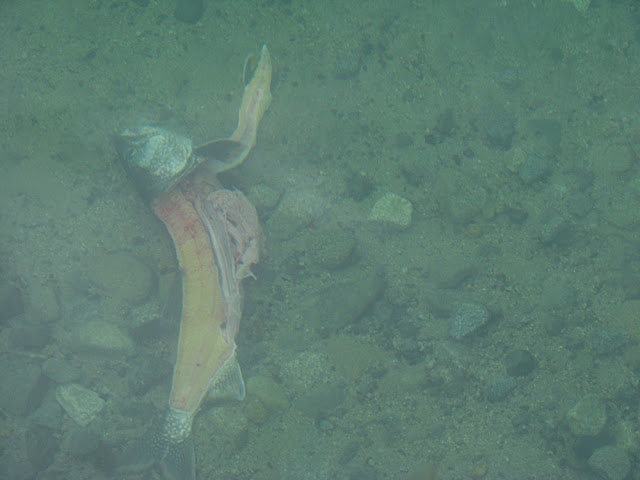 Cleaned and gutted and left for the other fishes. 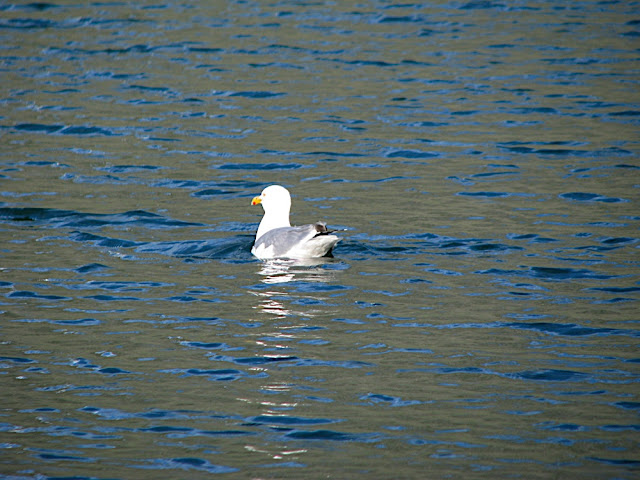 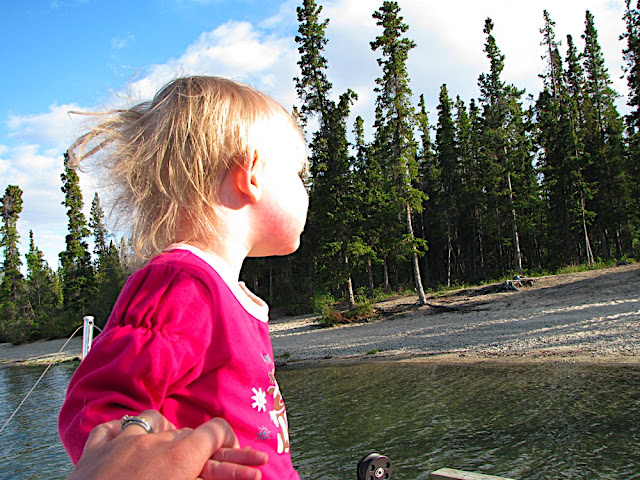 People kept walking onto the dock to check out and admire the boat. It was nice to meet other sailors and travelers and chat. Many were impressed (and some were surprised) that a sailboat could be brought into and used in a mountain lake like Kusawa.

We spent the night aboard, tied up at the dock. It was a cold night (Fawn is now talking about having a small furnace installed like our friend, Scott, has on his Macgregor) but the kids slept well.

Monday morning rolled 'round, warm and sunny. The Kusawa Lake campground, which had been packed, was now almost deserted. We pulled the boat out at the ramp, prepped it for trailering, and drove home in time for afternoon appointments and meetings.

By gum, it was a good weekend. I can't wait 'til next time.

I thought Fawn was Captain.

Fawn's official title is "Supreme High Ruler and Commander of All She Surveys".

What a fantastic day (other than the nasty dog diarrhea)! I am so glad it is all you expected and more.

And I love Fawn's title!

The captain really ought to know how to sail. Fortunately, that's not a requirement for the Supreme High Ruler etc.

Besides, the captain has to go down with the ship.

Wow! What gorgeous pics and what an amazing weekend you had! Can't wait to catch up with you this summer! Love, Catxxx

Wow, those are great shots and what a weekend it must have been! It's amazing to see Jade climbing those rocks. Just shows how far she's come and it must be very rewarding for you.

Is there such a thing as doggy Gravol for your next trip? :)

Love the story, the photos and the fact that you all had a great time. Can't wait to sail with all of you!

Outdoor activities like boating and fishing strengthens the family.